It was a rather lazy day with me not planning to do anything that involved. I had a lot of items I needed to be around to make trades for. I also wanted to play it on the safer side of things and finish off my level.

Sorting Out My Stash tabs 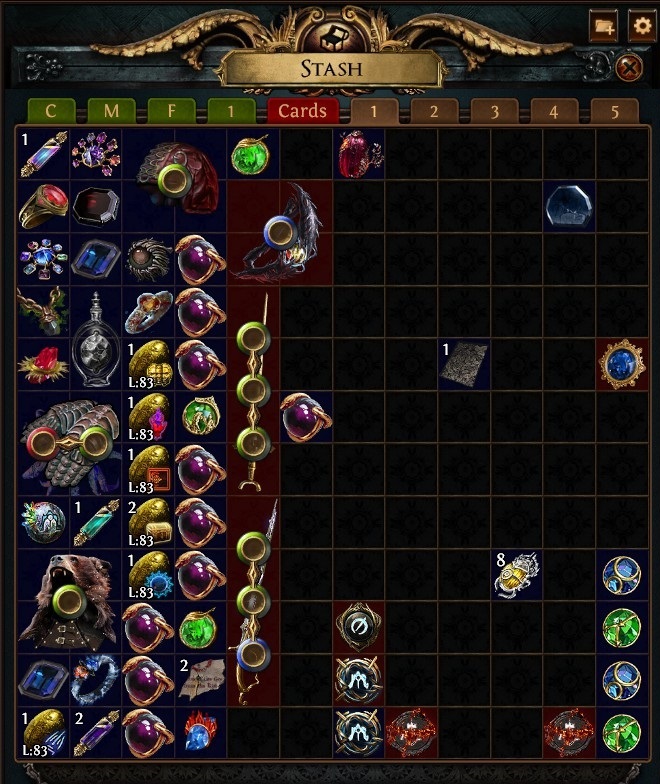 The first order of business for the day was cleaning up my stash tabs. I had a lot of things to price check and just junk that I shoved into a tab while I was busy. I was also just running out of places to put things to check the price out for later.

I found some items that I’ve now listed or a couple of Exalt each. Those items seem to be worth the price. This league has not been one where I’ve been moving many items once they are over one Exalt in price. It has mostly been bulk items that I can’t keep stocked up enough.

I also went through the mostly full stash tab that I had set up for listing items. I’ve had stuff in there for almost two weeks now that just won’t move. Anything under four Chaos that was older than two days I ended up junking. This left a lot of room I quickly filled up. I’m still trying to decide if I want to sell maps or not. While I don’t have a reason for needing a lot of currency at the moment. I could be sitting on around 19 Exalts worth of maps. Even selling off 10 Exalts worth would still be a crazy amount.

Since I was looking to be around for trade during my playtime I would try and forgo anything that I could not instantly drop and make a trade. This far into the league Path of Exile (PoE) players are not waiting before moving on to the next seller.

Even when you almost instantly send them an invite they don’t always accept it either. Making it a bit annoying when you have a hundred or so items you need to sell. That older PoE charm sometimes wears off when dealing with things like this. 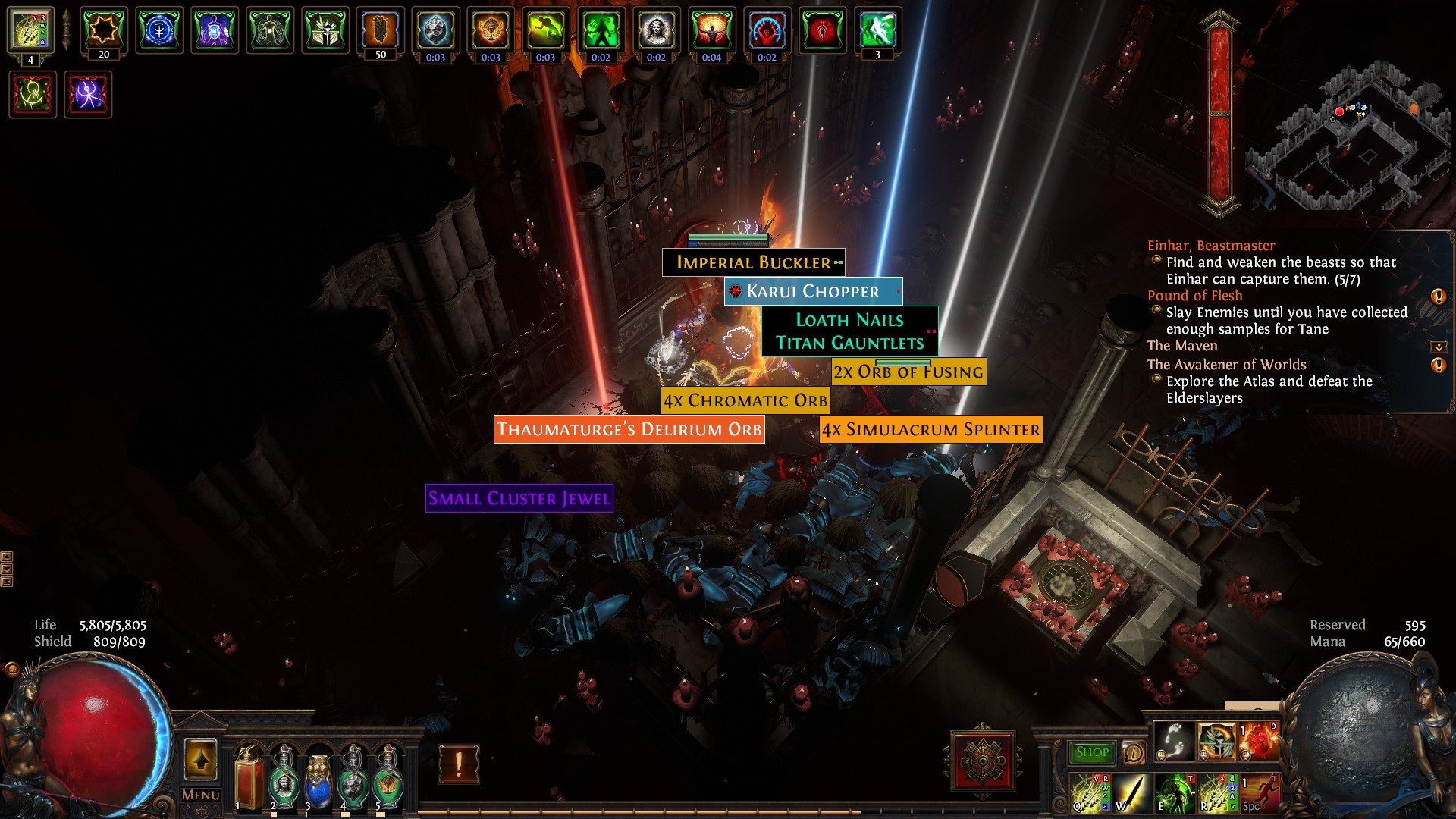 This meant for the most part I was just running maps. I had five things I was focusing on working on: gaining Experience to hit level 96, unlocking more Atlas passives, getting the Elder Slayers on the map, gaining Sulphite, and finishing more Atlas awakening bonus objectives.

At the end of my grind, I just have two more maps I need to run in Glennach Cairns to get the last Elder Slayer on the map. They took a little longer than I would have liked. I however was not looking to run them right away either as it was just going to be a lazy day in PoE.

While I was running Tier 14 maps for most of the night. At one post I had died twice setting me back 20% experience and more than I had grinded for the night at that point. After a while, I decided I would take more of a risk and bumped it up to Tier 16 maps. It was a long grind but I made it there in the end.

I ended up unlocking six more passive points total for different regions on the Atlas map. It is rather crazy how many modifiers are now being added to all my maps. Since I was taking it easy I was not adding in things like Sextants to the regions adding even more modifiers onto everything. I swear every time I hit my Sulphite cap and needed to run a bunch of nodes in Delve that would be when someone decided to contact me trying to buy something. It almost always was not the cheaper items either. No, it had to be 40 Chaos or 80 Chaos. I missed out on some big sales. Thankfully later into the evening, I ended up selling those items anyways.

I ended up making it down to depth 380 in Delve. At this point, I’m going to set my goal to hitting 500 depth. I have no idea if that is even possible with my build. Since the changes this league, 500 depth is equivalent to the old 1k depth range. Either way, it’s a goal I’m aiming for unless I hit quite the wall. 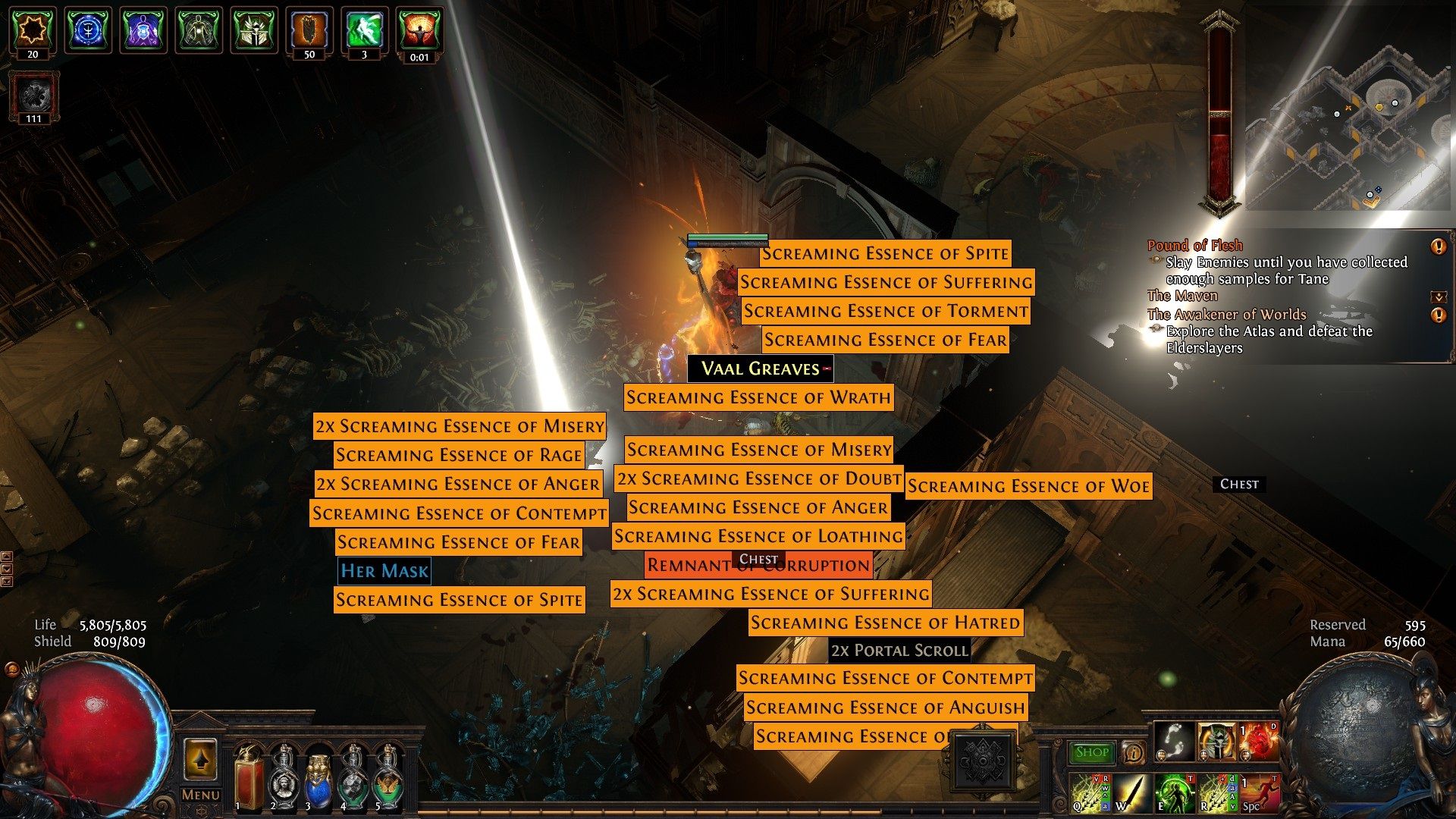 I had several Scourge maps I had leveled up to 10. While they were mostly junk ones. I wanted to see if my luck would change as they were leveling up on what kinds of drops were getting added. One of them I was a bit misfortunate in getting almost all essences per rare.

Another Scourge map ended up having a lot of damage dealt per second to the player. It was so bad after I killed a few rares that I ended up bailing on the map. While the ground was littered in unique and other drops. I could barely keep myself alive long enough just to take a look at the loot.

I left before I could get killed losing experience while I was so close to leveling up. The risk was just not worth it in the end. It was at least interesting to see how bad they can get even on a lower-level map. Knowing this moving forward I know my character can and can’t handle and I’ll avoid leveling up a Scourge map too high if things get too hard. I’m just about ready to give Sirus another attempt. I also would not mind trying some further Elder and Elder Slayer farming among other things. Along with pushing even deeper in Delve while chasing after anything of interest.