One of the biggest fortunes I’ve ever amassed in Path of Exile is now spent. I am officially Exalt broke with just a few scraps here or there. Hopefully the gear I’ve now acquired and all the changes I’ve made will be enough to progress further along.

The day started with a few goals in mind. I wanted to make another attempt at Sirus. Over the past few days, I had amassed over 23 Exalt and I was looking to spend it if certain items come onto the market. I also wanted to venture down deeper into Delve and hopefully get some boss kills as well. 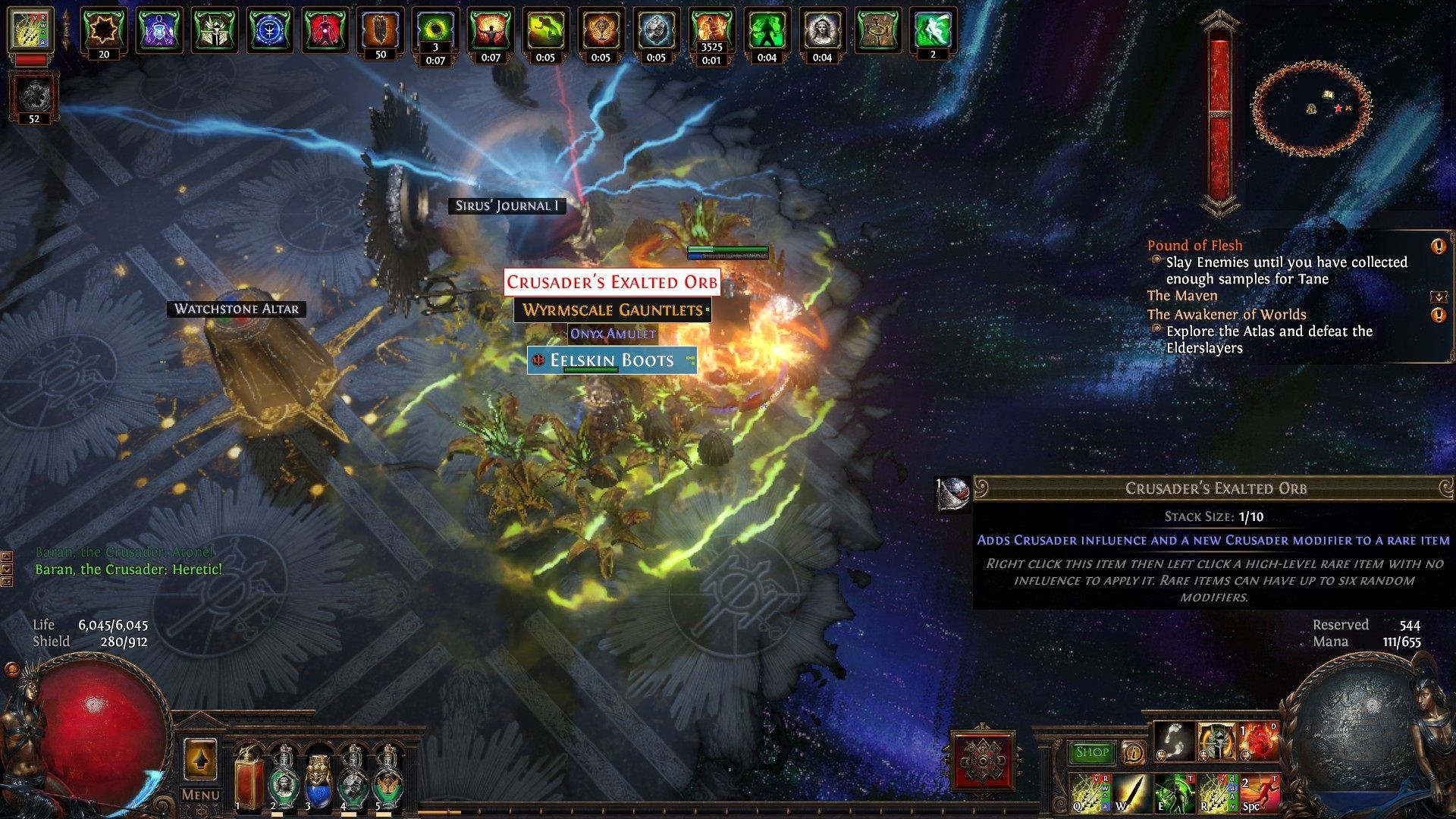 I’ve been itching to make another attempt at Sirus. For me to do so I needed to finish off clearing enough maps in different regions on the Atlas so all the Elderslayers would go back into their Citadels. I then could travel to the citadels and kill them.

This was also great since I would also run maps I’ve yet to have Maven witness boss fights on and get credit towards the next Maven invitation. Thus working on increasing my passive skill trees in different Atlas regions as well.

Thankfully I had already run a few maps in different regions on the Atlas. I could see how many were remaining for each of the four Elderslayers to move to their Citadels. Once that occurred they were rather easy fights. It was now time once again to fight Sirus. My first time around a few days ago did not go so great. I did learn a fair amount and since then a little more about the fight. I went in hoping I could pull it off this time around.

While the first few phases of the flight took forever. I at least was able to do them without a single death this time around. I started to notice all the little things you need to do so you can avoid getting killed. Along with not having to use my life flask frequently as I was the first time around. When it came to the things that killed me last time I again did not get killed at least not right away. This time I knew when he creates the funnel and started dealing damage that I needed to run behind Sirus. When the small maze was spawned I looked for the particle effects for the exists to flame dash out of it.

He then entered his final stage. I was thrilled as he had little life left. I had yet to die so I had lots of portals left if I had to use them. After some time he re-entered back onto the battlefield at 75% life. My heart sank. It was going to be far from over.

After that, it was just pure insanity. Everything was harder. I was struggling to the point I was barely getting a life flask charge before I needed another one. Then happened my first death of the fight.

I was not that worried as I still had a few tries left. I had entered in and good news the chaos balls of death were not in my way to get back to the fight. On my way back I hear him say the words that will instantly kill you. I used my flame dash and I thought I dodge the attack. Dead yet again.

I get back in and I make it back to him without a death this time. I start trying to do as much damage as I could. His life barely moved at all. A little while later I got killed again.

After a few more deaths I think I have him down to around 40-50% again. I was down to my last portal and I entered in. I ran back without getting killed. Not long after that, I died yet again. That was it for that attempt to kill him. I would have to get the Elderslayers to spawn and do all that again to make another attempt.

While I was not keeping too much attention to the time. I think I spent over 30 minutes fighting Sirus. I was exhausted with how insane the fight was. I just don’t feel like it should be that bad of a fight. It’s time to get more damage. 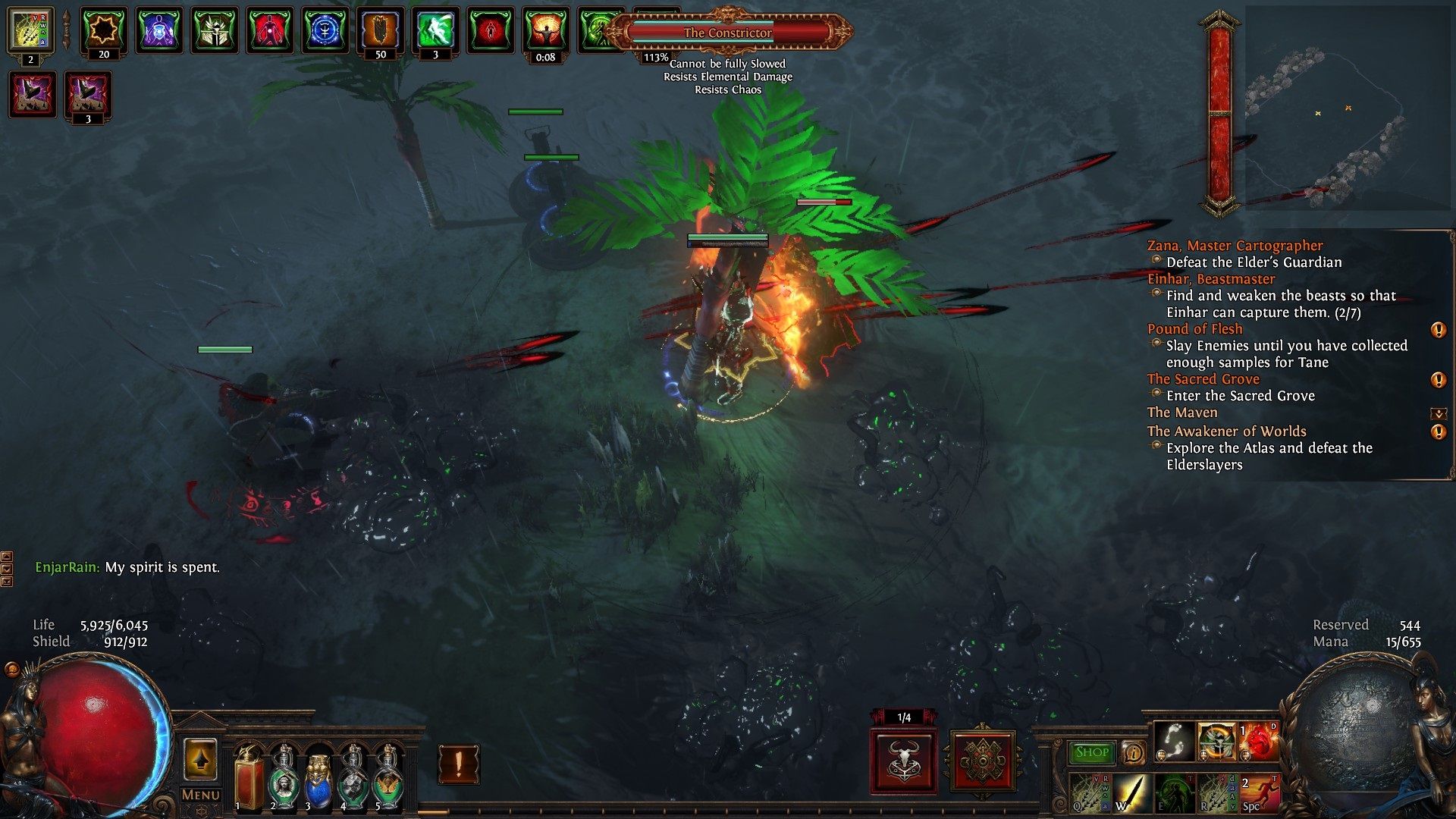 While I was not in any rush to get back into fighting Sirus just yet without making a few changes with my passive skill tree, gear, and even skill gems. I thought I should work on getting the Elderslayers back on the map to slay them again.

Since I had used all my Delve daily’s I had a bunch of Zana ones to use. I thought I might as well cycle through them and reroll her inventory a few times. Maybe I’ll luck out and either get something in the shop or a map from the mission to run that has high value.

I ended up getting two different maps from my Zana missions that had an Elder Guardian as a modifier. Since I’ve yet to try any of them I thought I was might as well. I know the maps themselves with them on it go for a decent amount. Getting them as an option for free seems like a waste not to.

One of the fights I think I died once. The other while it took some time I managed to edge out a win without getting killed. I ended up getting two Fragments of Construction for my effort. I’ve never done those either. Perhaps I’ll get the other fragments I need and give it a try one day.

After that, I’m rather done running maps for the day and decided I want to do some Delve. Some of the higher fossil prices I noticed are starting to decrease. Since I can farm them now I might as well see if I could find any more. For the time I spent down there I ended up having a decent little haul. I found some cities to run and some fossil nodes I wanted to check out. While I’m not done clearing everything out I made a good enough effort for the day.

In total, I found three more cities. I ended up discovering them as I wanted to explore the biodome that I had uncovered to see if it had any sweet nodes to farm. One of the cites was a bit of a disappointment being one chamber in size. The other two are decent. I however have reasons why I never finished it off.

While I did not get a screenshot of the loot as I put them into their normal stash tabs instead of trying to keep everything together. I got a few maps and two six-linked weapons. While the weapons themselves were worthless a six-link sells to the vendors for a Divine Orb. Which is about what people were trying to sell the items for anyways.

The biome I was exploring had two nodes that each dropped a Facted Fossil. They have yet to sell and it seems I’ll not be getting the 40 Chaos each as I was hoping. Seems many players now have reached depths where they can start farming them up.

Where do I begin on why I am broke? There are lots of reasons most of them being the result of today. You could say I’ve been going on a bit of a spending spree these last few days. Today however tops them all for what I spent on an item in Path of Exile.

Several days ago I spent 7 Exalted on a quiver. I know. I know. What is the actual heck are you thinking? I never thought I’d be spending that much on anything that was not a six-link item. It did not solve world hunger or anything of that sort. It’s got some nice damage modifiers and a decent life roll.

I was about to run another chamber in Delve when I got an alert one of the items I had an active search for had a new item listed. I have a few of these going and many of them are set a bit lose so if an amazing deal comes up I’ll get it.

I knew right away the tab that showed it had a new item was going to cost me a lot of currency. Most times when something shows in that search people are asking 50 Exalts or 100 Exalts. You’re firstborn, a blood sacrifice, and a million bucks. You know insane prices.

This time around it was 20 Exalt. I had a decent life roll, enough of the other rolls. Along with some strength, I could drop a passive skill I had and pick up more damage instead with that much.

While I know it could go for a slightly lower price. I’ve also seen them sell out quicker than I could ever contact the person to make the buy. More times than not they also did not have that kind of life roll or not those kinds of intelligence and strength rolls. It took me a while to press the accept button. There it was sitting many days of grinding. Lots of good RNG to get that much currency and items to have 20 Exalt. I’m sure the seller must have thought why is this person taking so long? After that, I make some massive changes. I spent around 30 Orbs of Regret resetting a few passive skills. I went out and spent another 1 Exalt or so on 2 medium cluster gems.

I went out and got a much better magic rarity vermillion ring since I hated the one I had and I’ve spent way too much currency trying to roll a better one myself.

I also went out and bought a bunch of gem cutters and increased the quality of some of my skill gems. While I’m trying to level up a few and get myself some level 21 gems for a while now. I’m not having much luck corrupting them myself. I’m tempted to just start paying a fair amount to buy them since that is about all I have left to spend on this build.

I also changed the gem colors of my helm. I finally swapped out the life regen aura I was running for Grace that gives me lots of evasions.

I don’t think I quite doubled my damage but it was a massive boost. It however came at a decent cost. Along with all the currency I spent, I lost around 200 life and 100 energy shield. Finally with grace running my mana reserve increased leaving me with only 65 instead of 111 mana to use.

It will take some time to get used to losing some life regen and having even fewer mana. At least I still got one more level to get on my Enlighted support gem in my helm. Which should help a tad once I finish off the last 33%. I also need to give running more labyrinths a try for an enchant. It’s not that I have not tried to kill some of the bosses I have in Delve cities. It just always felt like they took forever and I just never had the damage to standing a real chance. That all changed.

I marched back into Delve and took out four bosses I had on the map. One of them dropped a 40 Chaos ring. The others dropped junk. I can see why most just skip over them when they can. At least I got some revenge. I still have a fair amount of grinding to do before giving Sirus another try. I also need to get used to my new setup and items. I’ve also started working on rebuilding my currency stack. At some point when I get a bunch of Exalts again, I am considering making an Alt. I have no idea yet what I want to make.