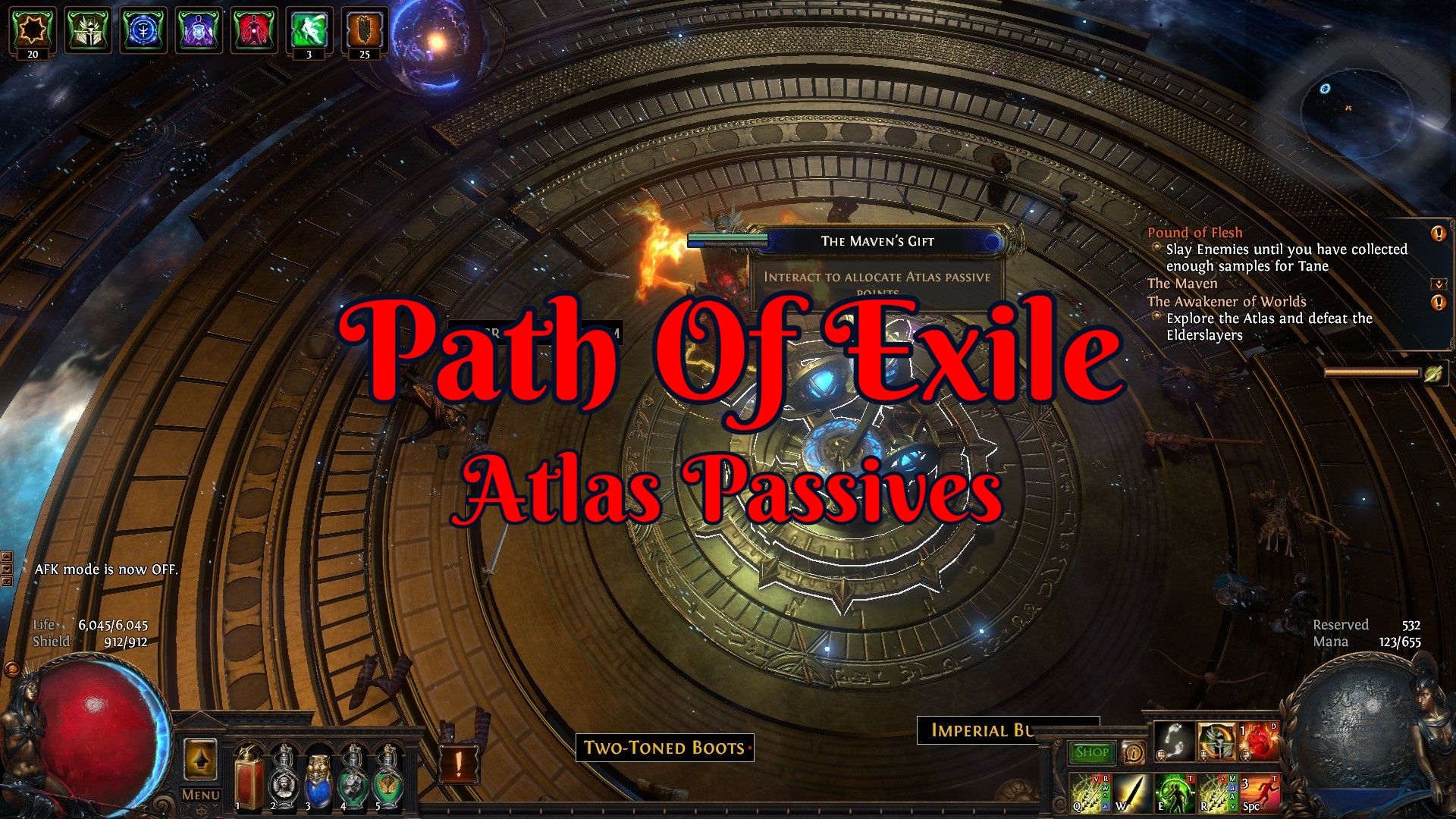 Getting some decent drops and delivering some revenge on an old foe. I focused on unlocking Atlas passive trees in different regions on the map. Along with more grinding on the actual Scourge League itself. The search was on for finding where on the Atlas I could pick up some bonus for Heist and Delve. For one of the leagues, the passives look quite amazing. The other one appears to be a bit meh.

As someone who has been running lots of Delve; once, I unlocked Valdo’s Rest regions passive tree I was at first thrilled. I took a look at the first two nodes for it and a chance at getting double Sulphite and an increased chance at getting an extra Niko mission sounds great.

I’m even willing to say I’m ok with the little extra 500 Sulphite for finishing a red tier map in the region. That is a nice little bonus on top of everything else. The other bonus gives you increased damage and movement speed for finding Sulphite veins for that map. Umm, what? That seems a bit disappointing at least at first glance.

I guess I did not know what really to expect. Valdo’s Rest overall seems to be one of the better regions to farm for some of the other league passives you can pick up. There are ones for Delirium, Blight, and Harbinger. With some of the other regions on the Atlas map being kind of boring. Those rather boring other Delve bonuses could come in make a nice pairing with something else in the passive tree for that region. 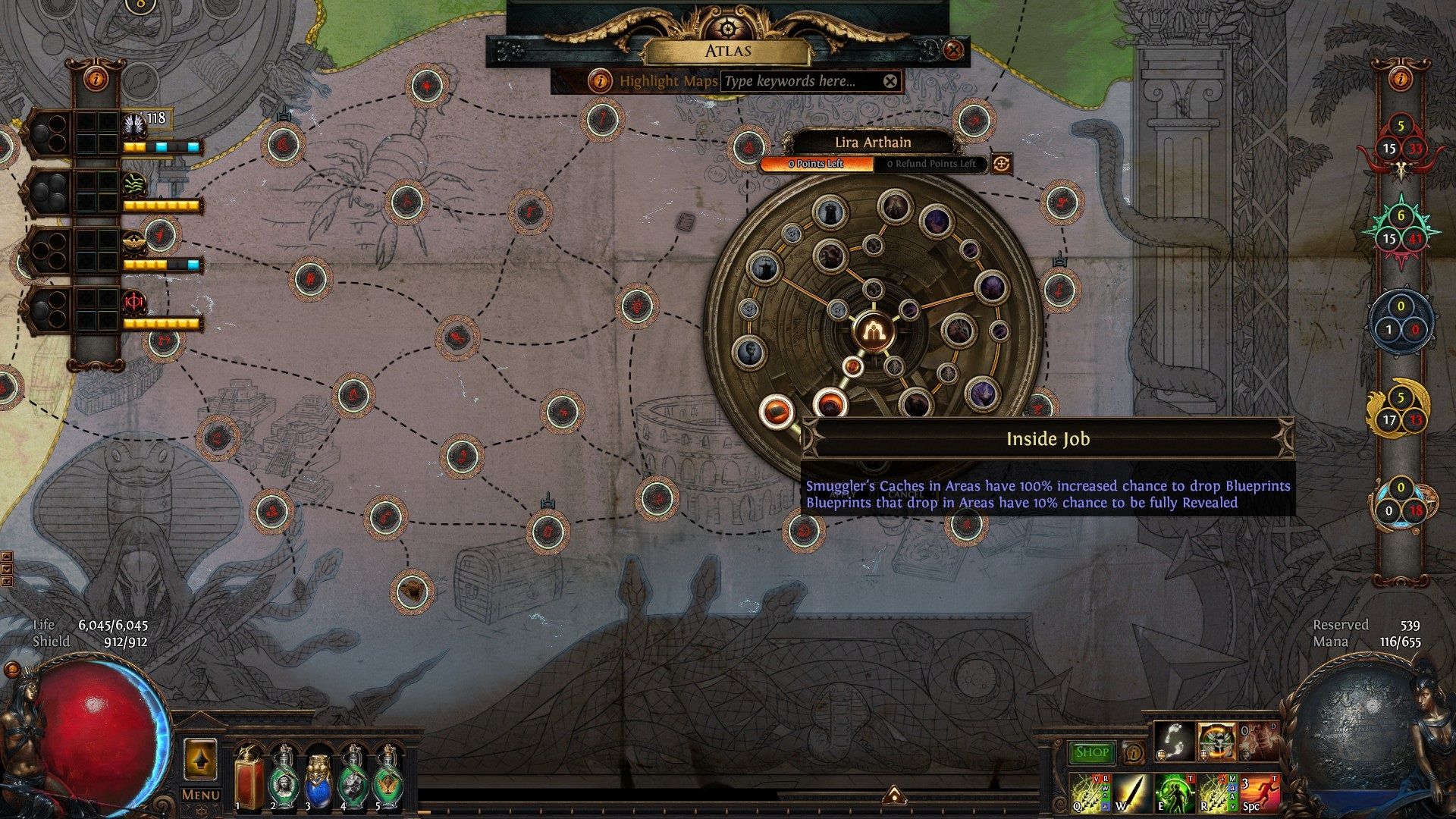 What I was thrilled about was finding the region that had Heist passives. It ended up being in the Lira Arthain region and wow if it works the way I think it does that could be amazing. I ended up unlocking four passives so far so I could pick up Inside Job. While I have yet to get a blueprint to drop fully received if that includes unlocking all the wings and everything. That would be a massive amount of Rouges Markers saved. Further increasing profit by a considerable amount.

Since I’m not that thrilled with the Delve bonus and I’ll more than likely be running with Sulphite scarabs anyways. On top of the fact, I’m already struggling to spend my Sulphite when I’m just in the mood to farm maps. I think I will be grinding the Lira region till I run out of maps to run for it before working on other areas.

I have over 30 heist contracts and I’m sure I’ll be piling them even higher soon enough. Even better than before they are all level 80’s. So the rewards should on average be a lot better than what I was running after buying the lower level ones every time my character leveled up off the vendor. There I was grinding out the massive backlog of Zana missions I had to run. When all of a sudden one of her offerings once I found her in the map I was running was Cortex!!!! While I would have preferred a Cortex map dropping and selling it for 3 Exalt. I’m not saying no to a map that could drop things of high value. The modifiers for this map were insane since you got synthesized once. I was even opening every random chest I could as sometimes they would drop a red map.

Every time I ran into a pack of magic monsters my screen would look something like this. I ended up making several looting trips just to pick up everything that dropped. I also wanted to ensure I did not leave anything behind with how costly these maps are. 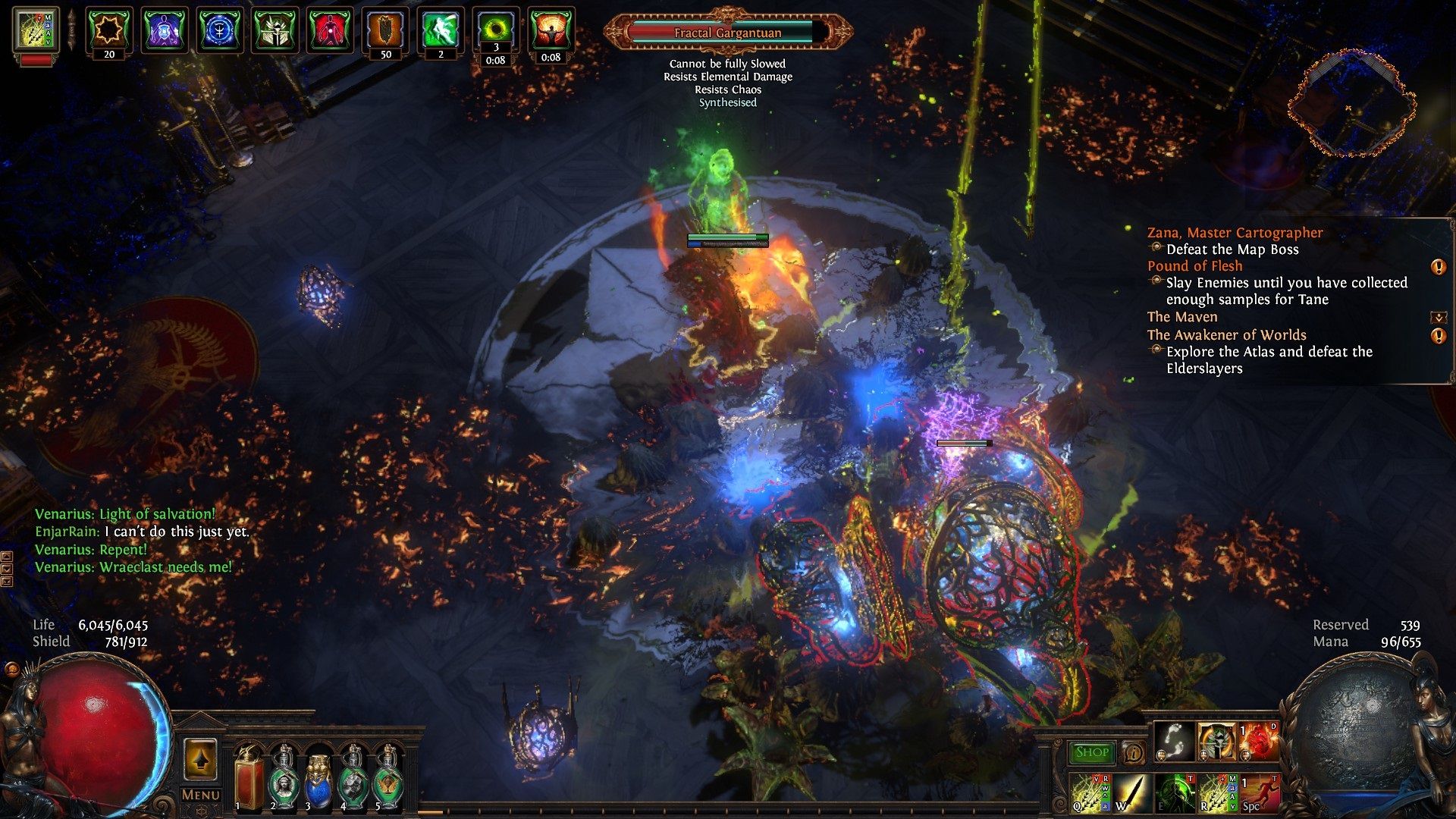 I made my way to the boss without a single death. I remember getting the fight down to where I did the first time I ran the map and failed. I thought I was almost done and was going to win this time around. I was mistaken.

What I did not know is that was more towards the start of the boss fight. He kept spawning in more and more creations for me to defeat. At one point I could not help think to myself “is this ever going to end” and then I was shocked when Venarius said something along the lines that it was never going to end. How clever of the game developers to blow the minds of the player like that.

I defeat the event without a single death and these pair of synthesized gloves dropped. Also in my inventory at the time was some more of the valuable loot that dropped. I think the gloves are near worthless and I sure as heck did not get anything close to 3 Exalts of loot. Rather glad I did not buy this map for 3 Exalt I would have been unhappy with this kind of result. I’ve been running around doing everything but focusing on Scourge for the most part this league. Since I’m not trying to level up anymore and getting killed with losing all my experience is no longer an issue. I have started to grind out experience for the Blood Crucible yet again.

Right now I’m at level 44 for it. I have a fair amount of more grinding to do. I’ve started to take the stacks to over 100 and just go with it till I get flattened when I enter into the shadows. Since that grants more experience for everything I have in my Blood Crucible anyways I don’t mind the deaths when it gets too hard. I’ve also had some run-ins now with Scourge bosses on maps. While they drop a bunch of corrupted items and several tainted currencies. None of it so far has been worthwhile in taking the time to down one of them. It seems you have to get rather lucky. 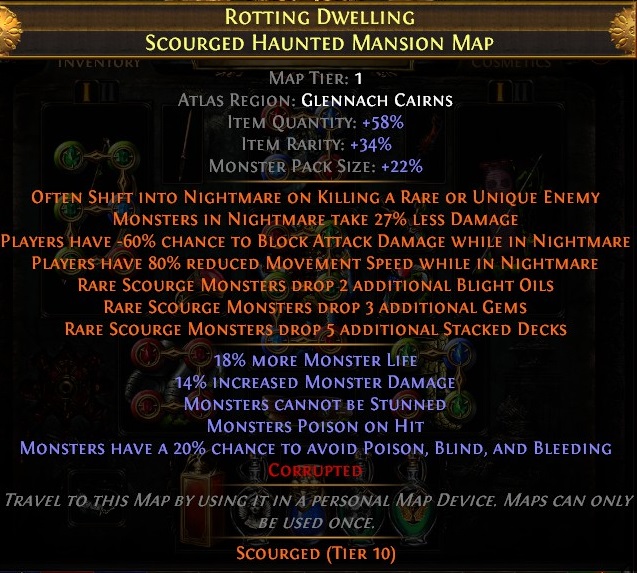 I also finished off another lower-level map in the Blood Crucible this time bringing it to level 10. It having rare Scourge monsters dropping 5 stack decks per kill made this one of the more rewarding Scourge maps I’ve run to date. I ended up with 60 Chaos worth of loot.

Outside of how long it took to get the map to Scourge 10. If I was pulling 60 Chaos or more out of each one I’d be willing to run them more often. I might consider trying some higher-level maps now and seeing where that takes me. 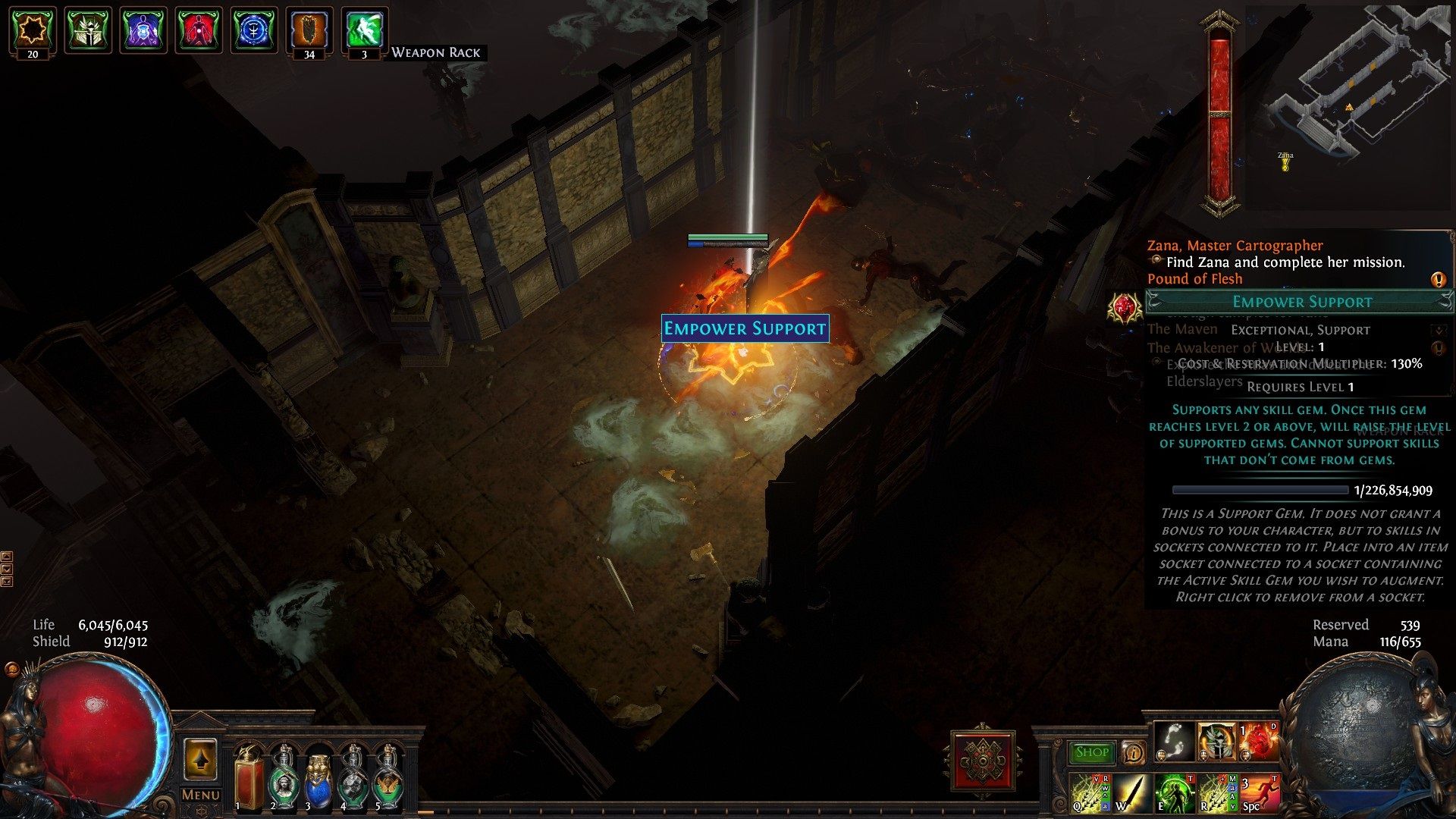 It’s always a great day in Path of Exile when you get to share some of the loot you found. Outside of what I ended up getting in the Scourge Map and Cortex. I had some other moments of the night for loot.

Always nice when you get an Empower Support to drop. There are many different reasons why someone might be buying one. Since I did not need it myself and have no plans to try and level up a bunch of them. I sold it for a decent price. I also had an Augmented Distant Memory map drop. While I could not look it up on the main site for the prices. I ended up looking at another site, they appear to be around .7 Exalt. While not as much as a Cortex there must be some interesting loot inside. I will more than likely run it myself unless I have a sudden need to raise some funds quickly. I also had my second Ventor’s Gamble Gold Ring drop this league. While it was a lot worse than the first one I found. I did end up selling it after adjusting its listing price a couple of times. I had under-listed it at first so I upped the price where it sat unsold. After a little more adjusting of the price, I got a sale as I was writing up this post.

It’s a good thing I’m starting to rebuild my Exalt currency stack yet again. I want an insane amulet and I have a feeling it will be the most costly thing I’ve bought this league and perhaps the entire time I’ve played Path of Exile. I just hope to have enough the next time one of them shows up on the market.

Make sure to check in when the next post about my Path of Exile journey drops. You won’t believe what I found.