There are a few things I’ve been putting off doing on the Atlas. As I’ve been having fun with other things this league in Path of Exile. It was time to see what all I could defeat. On top of that, I worked on making improvements to my gear. I finished the day trying even more new things at least for me. 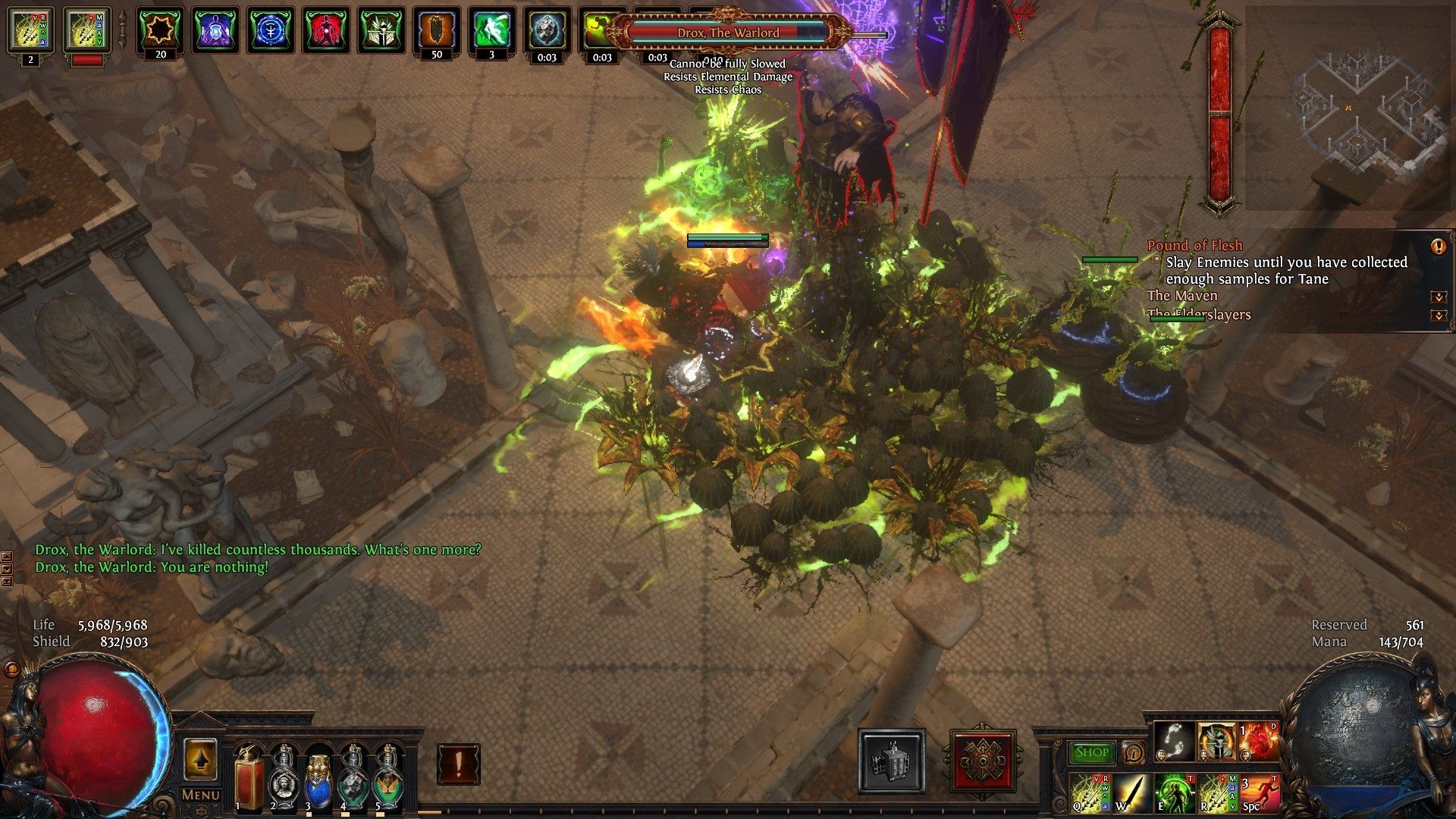 For a while now I’ve held off on running the Elderslayers or even talking with Zana and Kirac in my hideout. I have been rather enjoying running maps without the Elderslayers adding further difficulty to the maps. I however wanted to know what was beyond that.

While in the lower tiers of maps I had dealt with the Elderslayers before to unlock the different Watchstones and increase the Atlas maps levels. I still had a quest to take them out again. So one by one I went after them.

Redeemer, Warlord, and Crusader the first three Elderslayers I went after was not much of an issue at all. They went down with decent speed. While I did my best to avoid taking unnecessary damage and dance around the floor. It did not feel like I had to. Granted standing still face tanking them I doubt would have gone well either.

It was then time to face Hunter. I’ve dealt with him before in the lower tiers maps. At around 50% life I want to say he stopped taking any damage. After quite a while of dancing around the room and avoiding taking damage the best I could. I decided to face tank him so I could get down as much damage as I could. His life did not drop any further and there was no reason for that to happen as far as I could tell. He was in a full damageable state by that point. I ended up getting killed trying to take out the Hunter. This resulted in me needing to run a bunch of maps again in the Valdo’s Rest region so I could try again. The second time I had no issues and after some back and forth he was defeated. I’ve never been this far along in the Atlas content before. Even more so since they made a lot of changes to it since I’ve been gone or was not playing that much. I had no clue what to expect and I did not want to spoil it for myself either. I was going into the Eye of The Storm blind. 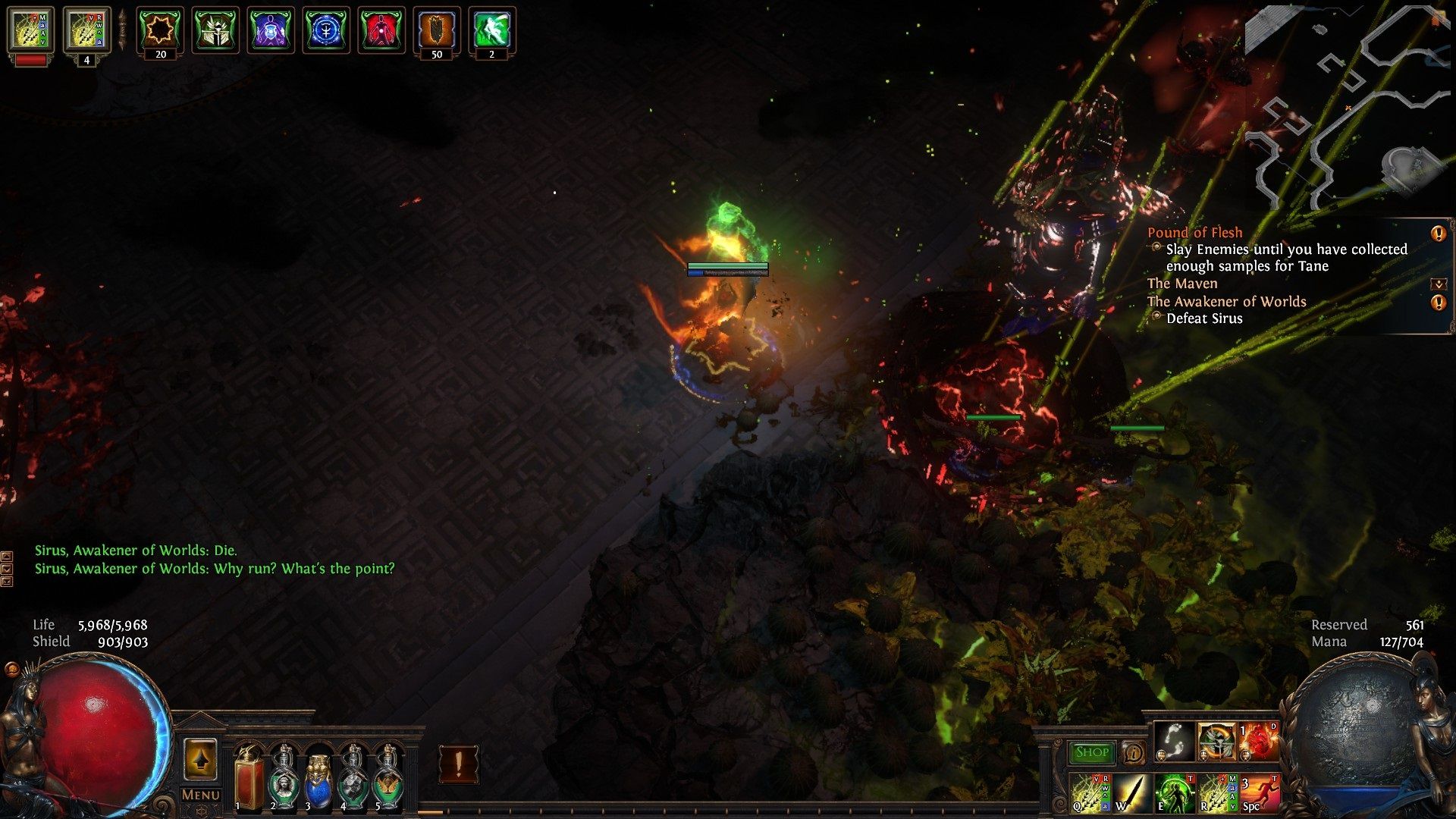 The fight with Sirus ended up being quite the learning experience. I ended up learning a lot about the different mechanics of the boss fight. It was however a great struggle. I never felt like I was able to get good damage on him.

I was always just running around. It seemed like the fight would pause for quite long amounts of time as well. It seemed like I needed to walk around the arena to certain points to trigger the next stage. I felt like my -18 Chaos resistance might have been too low as it was quite a brutal fight.

There was a couple of instances where I would get pulled in. I would try and flame dash out which always failed. I then would get killed in one shot. I had a few others deaths to silly things as well like trying to get around the giant balls of what I’m going to call death to get back around to where Sirus was. 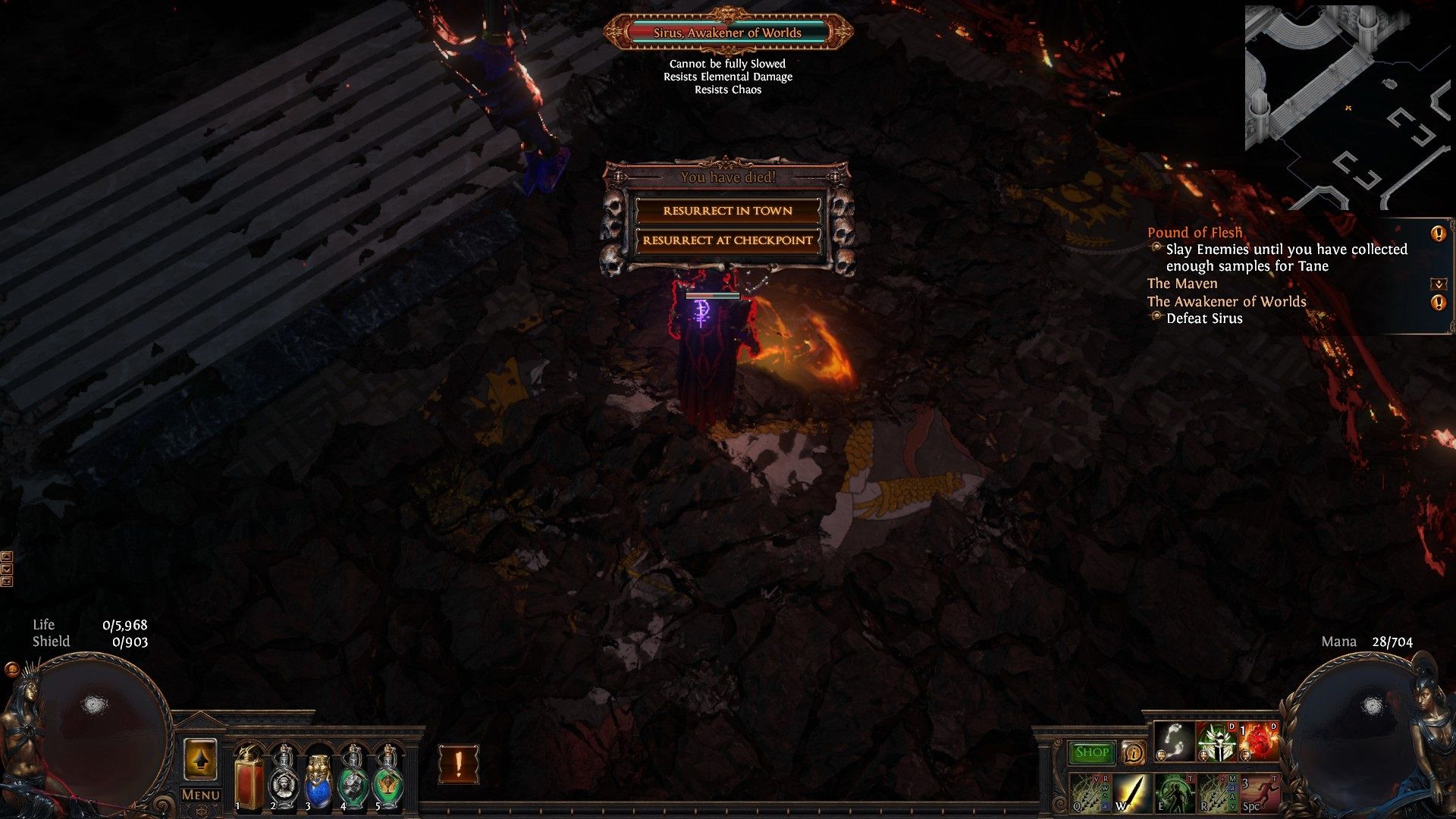 At some point, I noticed I can’t seem to get him below 50% either. Just like the Hunter which I only had just redone. I was down to my last portal and decided to just get as much damage as I could down on the ground. It appears even after I’m dead with damage over time that he is just happily sitting at 50% health.

For me to make another attempt at him I have to run all the regions several times to get the Elderslayers fight to trigger. I then have to defeat each Elderslayer again for another chance at fighting Sirus. More survivability and damage seem to be something I need. 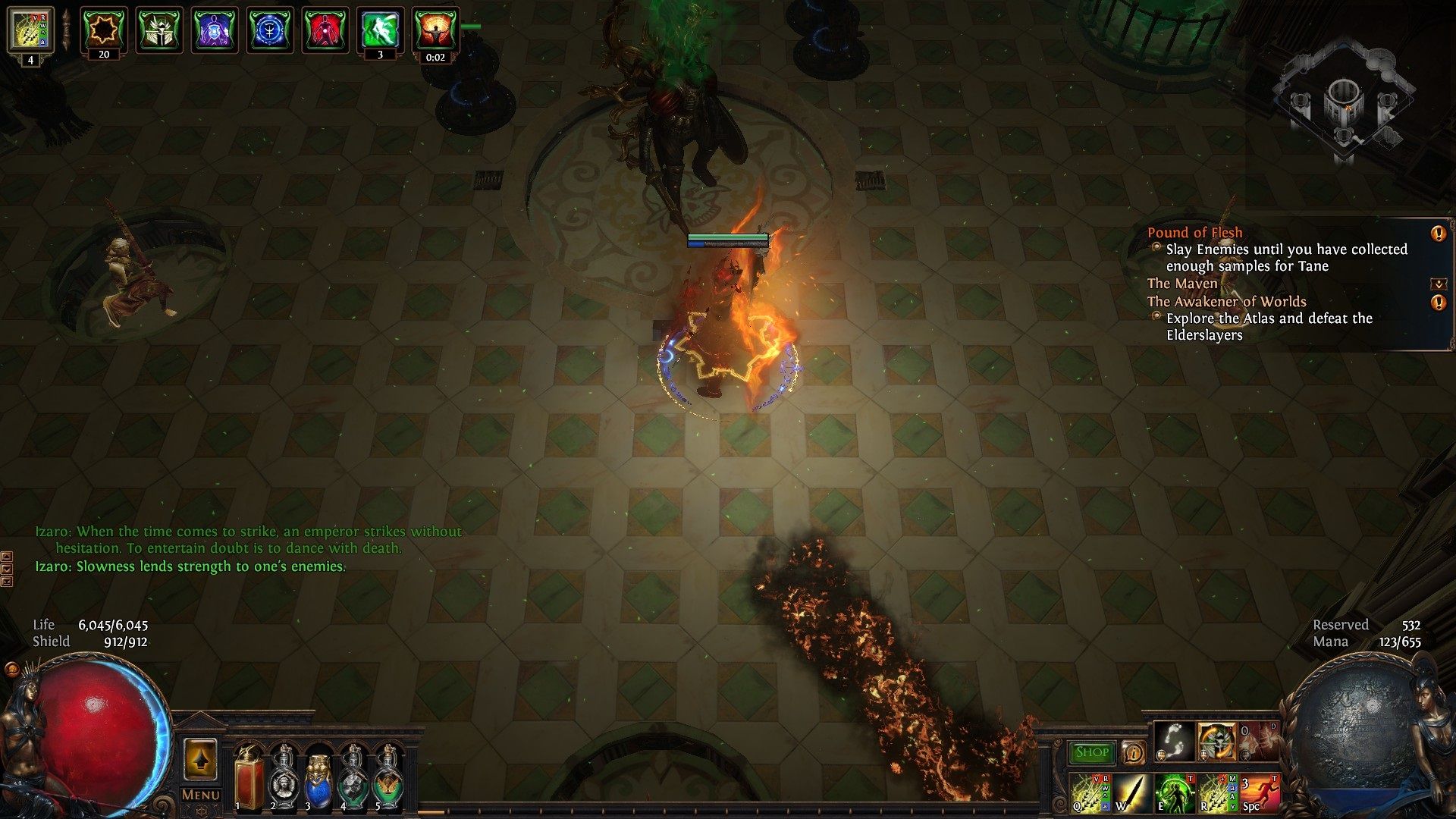 I never thought I would be running The Eternal Labyrinth to get enchants on my gear but here we are. There are a couple of different enchants I would not mind having on my gloves, boots, and helm. At some point, they reworked Labyrinth to be a little more favorable in finding a useful enchant so I thought I would give it a try.

In total this league I had looted 13 Offerings to the Goddess which are used to The Eternal Labyrinth so I would have that many chances hoping the enchants I want would show up. In the past many years ago I was just used to finding gear with the enchants I wanted already on them in the player market. Since the changes, it seems like old school enchant farmers have moved onto more profitable endeavors, or at least they did not care for what gear I wanted.

I don’t know if this has changed or if I just lucked out. In the past I know it’s always best to start running Labyrinth at the start of every hour. They use to change the layout every hour so you would have an hour of knowing the current layout before it changed.

I joined a bit late maybe half an hour into the hour. I have never been a quick Labyrinth runner which is why I avoid trying to farm for my own enchants. Thankfully the layout was really easy. Even I could remember the path, for the most part, to take to get to each of the different rooms. I ended up running about half my keys before the hour was up.

After that, I took a break. I returned hours later and to my shock, it was still the same layout as before. I was rather thrilled about this as the layout was easy. There was not even a golden key you had to find for a door unlock. I’m not sure if I lucked out or if that is just how it is for now.

It had been quite a few levels since I’ve done Labyrinth this league. It ended up being such a pushover =that I did not even attempt to make things easy. I would just take down Izaro in each of the encounter rooms without taking out the totems that would empower him for the final fight if they survived. I do love how they now display the information for the enchants. Along with giving you a few chances at hopefully getting something you want. During one of my runs, I got triggered commandment of light on my gloves. During another, I got regen 2% of life if you have been hit recently. While those are great the real reason for doing this was for a helm enchant and none of them ended up being one I was willing to use.

Perhaps at some point, I’ll return at getting the helm enchant I want. The normal Offerings to the Goddess are going super cheap so it’s not like I can’t go buy a bunch if I did not want to. I also noticed there are other types of these stones and that is going to be something I’ll need to look into. I ended up finishing the day by working on my Maven quests. I knew it’s silly but I’ve been avoiding running anything that I felt could make running maps harder for myself. With how badly I was getting murdered earlier in the league with the Elderslayers causing havoc I didn’t want to risk being in that position again.

Outside of my one encounter with having Maven witness a boss fight early on. I did not know really what to expect as I’ve never done them before. That was however about to change as I started to trigger the option to have Maven witness boss fights in the Glennach Cairns region of the Atlas.

I do know when you have Maven witness a boss fight it is supposed to make that fight harder moving forward forever on that map. This early on is something I wanted to avoid doing. Now I should be able to handle myself without much of an issue. I can’t always just sit there and face tank but it should not be me getting one-shotted either.

After finishing off the kills I needed to be witnessed it was time to enter into the Maven’s Crucible and fight all the bosses at once that she witnessed getting killed. They were decently spread out and they seemed easier than when I normally encounter them since I chisel and Alchemy my maps. I had heard about the Atlas passives beforehand. I was not 100% sure how you would unlock the passive points for it. At least for now it seems just having more bosses being witnessed and killing them to fight them again in Maven’s Crucible is the way to progress forward.

It would have been nice to have these more unlocked by now. I’m also glad I did not do so very on when I did not know what content in Path of Exile I was going to enjoy running. All the bonuses seem to have an impact on things spawning in and encountering things like Abyss, Incursions, Legions, and so on. I can only hope a region has bonuses for Delve Sulphite farming.

For the next little while, I’ll be working on unlocking more passive skill trees for the other regions on the Atlas. Along with earning a bunch of points and picking what passives I want. I also need to give Sirus another attempt at some point.

I’m also at a point now where upgrades for gear are insane in cost. I ended up spending way more than I ever would on a quiver of all things for a 10.5% increase in my chaos damage over time and a nice bump in life. Thankfully I did not need the resistance I was losing as those are going for triple the price. Hopefully, I can slowly edge up my damage to make a bit of difference over time.