Even when you don’t have something big planned for that day when playing a game like Path of Exile it can still be quite an exciting day. I’m in the preparation stages now for some massive farming and things to go underway. There are a couple of items I’m still trying to get and work on. Delve is starting to get insane and I’m excited for what could be coming next with my plans down there. I’ve made some big discoveries and have a lot of things I’m mostly holding off on doing. That way I can do everything all at once.

I have made it down to Depth 294. I did get killed once and almost half a dozen times so far. It’s starting to get to a point where once I hit the wall in terms of what I can do without getting killed a lot I’ll be backing off to a more shallow depth. I think a depth around 250 would be decent.

I have lucked out and found several cities on my last few trips down there. While I did run some of the chambers in them. I decided I’m going to hold off and do a bunch at once. I have not in quite some time dumped all my loot from Delve including the maps into a stash tab and just see how much value I’m pulling out of there.

You might notice on the map above there are six cities I have found. At least two of them have a single chamber and one I can only see the border off. It took almost no time to even find these. If it ends up being like that at these depths or getting better the deeper I go. I’ll keep pushing and exploring at those depths. You might also notice in two of the cities the chambers have different icons that do not match the rest in those cities. I have found two boss fights. I think I’ve only ever tried one or two bosses in Delve and it did not end well in the past.

This ended up being the main reason I ended up skipping over running most of the other chambers. Unless I wanted to go through them just to get deeper without having to go around. I do think the second boss I found while it’s at a deeper depth should be easier of the two to try.

I’m also at a point now where I have 174 levels worth of darkness that I need to explore for hidden fractured walls for loot. Along with anything else I missed or chests hiding in the darkness. I’m drooling just thinking about it.

With everything I have to do in Delve, it should be a massive haul. Even more so with the depth, I’m now reaching. I have no idea how much wealth could be hiding down there. I do know I need to be getting around to running it all soon. 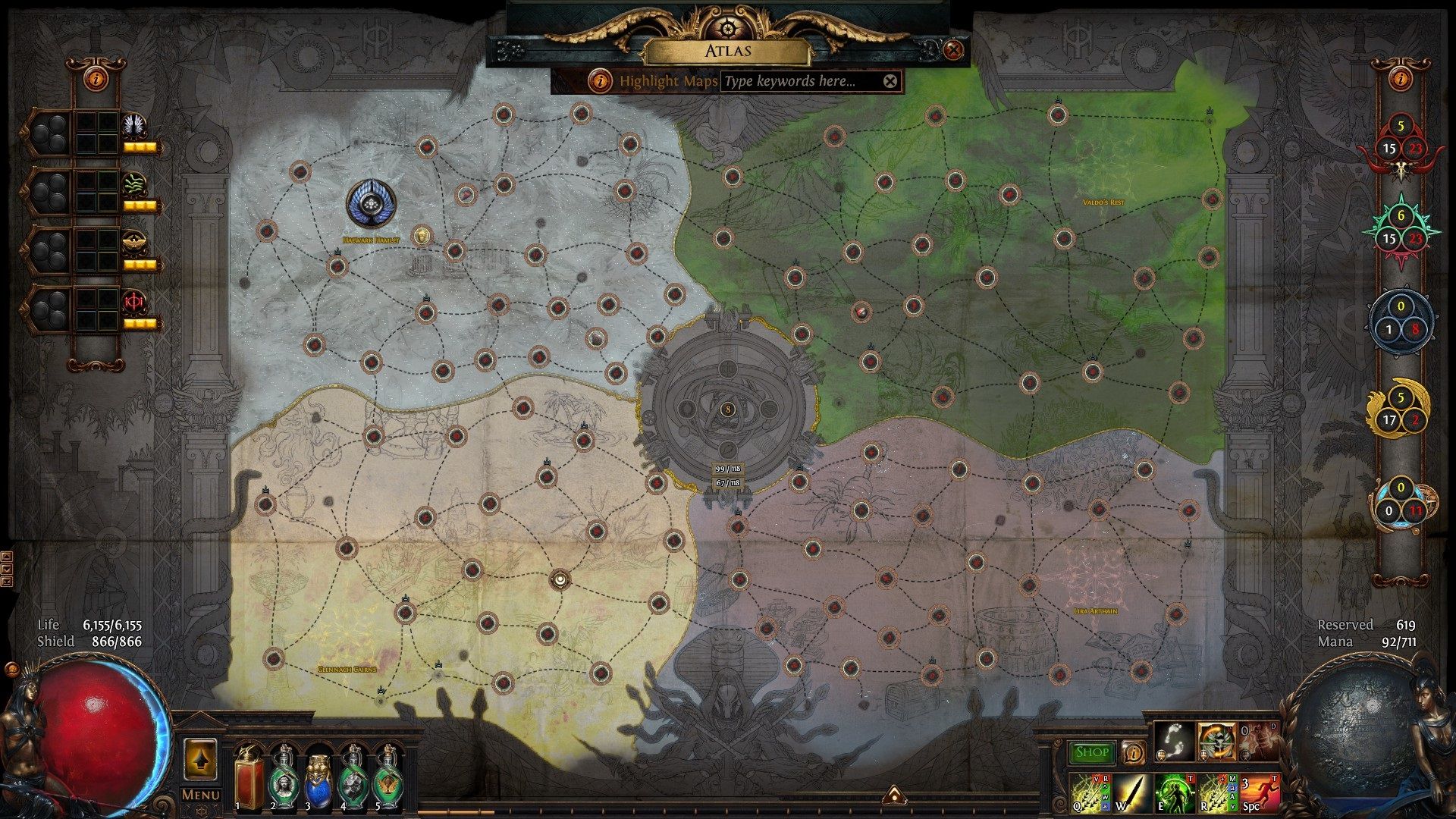 Since I have stopped messing with the Conquerors on the Atlas they have all stopped trying to murder me on each map run. They are all however sitting in their citadels waiting for me to come knocking. I’ve been avoiding them for a few days now.

While it’s been amazing running maps again without getting killed all the time. I would not mind seeing if I’m now able to kill them yet again at these higher levels. I also would not mind being able to farm the better gear that drops on maps that are affected by them.

On top of that, I have a few maps I’ve been holding off on running. I have a few more unique maps to run. I also have Elder influenced maps that I’ve been saving. I’m at a stage now where I’m ok if things got hard again on the Atlas.

I also want to see what the next stage of things is. I know there are quite a few other things I’ve not gone near yet like using Maven to witness the boss fights. There is a lot of unknown for me and that is the exciting part about it. The most profitable and enjoyable thing I’ve done this league has been playing around with Heist. It has come once again that I have a stockpile of things to run. Not to mention on Day 18 I leveled up a lot of my crew.

Since I have over 20 Heists to run again that will be more than enough to finish off my crew's levels. They have also been a nice source of currency which has allowed me to buy quite a few upgrades over the past two weeks.

I also have 5 Grand Heists to run. I’ve been putting them off for quite some time waiting till I was more ready. Beyond all the levels I’ve grinded on my crew members I have stockpiled 75k Rouge’s Markers to spend on those Heists. As such I’ve been having a bit of a sale. I started discounting things more aggressively. Along with trying to stay more on top of sales on prices. A few times in the past if it’s just a couple of chaos and I’m busy I don’t stop for a trade. I also don’t tend to haggle with people when they want to buy something cheaper than what I’m asking. Since I’ve been in an item selling and moving mood I’ve stepped up in trying to sell things.

I’ve also created some alts and moved alt gear or stuff I want to keep for now over to them. While the stash tabs are shared with my other league characters. You can fill up their personal inventory space. This has helped clear out some room.

I also have a few things I need to turn in or run to get them out of my storage as well. Once that is all done I’ll have lots of room for new stuff. It’s just going to take more effort than I like making it happen. I have been running around doing a bunch of random things without finishing anything. It has been quite rewarding with a bit of luck on my side. I managed to level up and loot some nice things for the day.

While I was not expecting to hit level 95 it did happen. I was not doing anything risky yesterday so I managed to build up a lot of experience. I ended up playing it safe and grinding out the rest. Right after I leveled up I died like three times. Thankfully death waited.

While farming some Sulphite I ended up having an Enlighten Support gem drop. These things can go for about 2.3-2.5 Exalts on a busy day after they have been leveled, corrupted, and the corruption did not get what people wanted. I was needing one of these so I have myself over 2 Exalt. I just need to level it up. This is also now my second time having a Cortex map drop in this league. Since it did not go well the first time running it I’m tempted to sell it. They are still going for 2.5 Exalt and higher since this is the Tier 15 version. While I’m still on the hunt for a new chest piece. They are quite rare to find and people are asking silly amounts sometimes 20 exalt in some cases which is just mind-blowing. As a backup, I ended up buying a chest for next to nothing and crafting maximum life as an extra energy shield onto it.

While I’ve never made a 6-link chest before since I usually just buy them. I could end up giving it a try if I can’t find exactly what I want. While the chest piece is not exactly what I was hoping for. I now have an option. I also got it for next to nothing.

I’ve spent about 40 Chaos between buying it and working on the chest. I still need to roll the proper socket colors I need. My first attempt to get the socket colors I needed it to be failed. Then the pricy part unless I want to corrupt it and use this league's mechanics of tainted orbs of fusing risking breaking the item. Needing to land 2 red, 3 green, and 1 blue on a Strength chest is a bit tricky. Since It’s getting harder to exchange the lower tier currencies into Chaos having this side project to burn them on is rather nice. 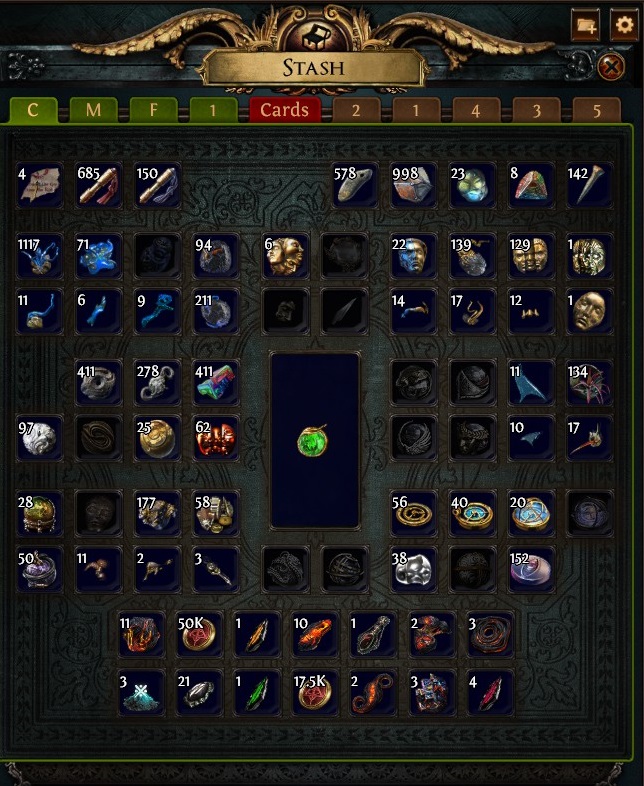 Soon it seems I’m about to embark on quite a few fun adventures that I’ve been building up to. It was also quite a nice day looting over 5 Exalts worth of loot in total. I just need to finish up doing a couple of things first.