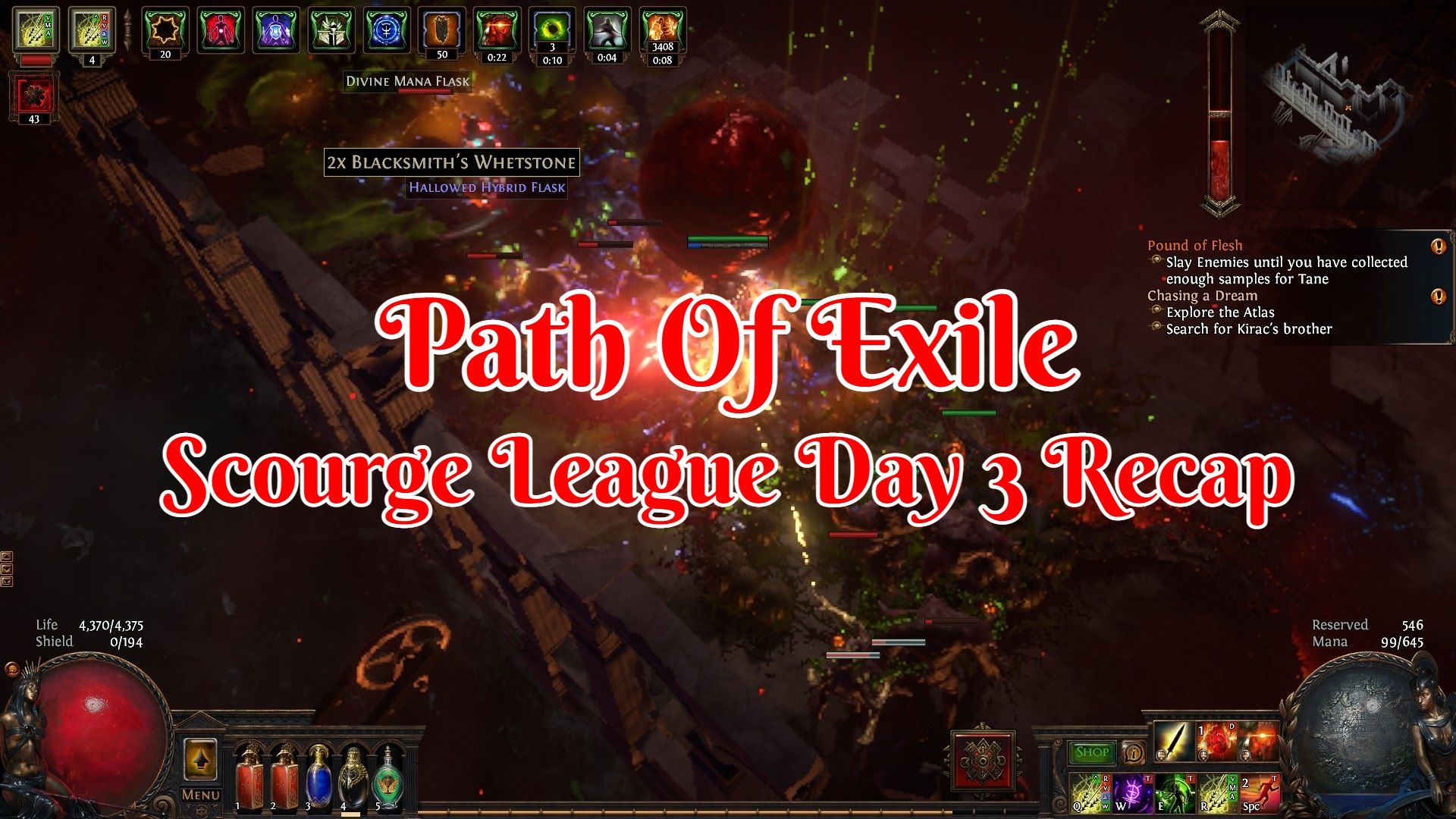 Day 3 was a bit of a mixed bag in success for what I wanted to accomplish. The biggest thing was getting some upgrades and my resistance maxed out. I also wanted to try out some of the past league mechanics that I was not around for. Along with trying to farm a particular map for 6-link bow division card drops.

I arrived at the Atlas in quite some rough shape. I had barely above negative resistance. I needed to do some gem swap-outs. There was a lot that needed to happen.

I thought quite early on I had stuck out. I was interacting with a former league mechanic of which I’m not quite sure which league it belongs. You have to kill an area and you score points. Those points then for only that instance can be spent on items in the shop. Any extra points are not carried over.

I had run a couple of maps with them in it. I thought it was great when I would find things like Orb of Alchemy and other currency in the shop to buy with my points. On one map run, I noticed in the store had an Exalted Orb. I thought if I just ran all three on the map of that league's devices I would be able to afford it.

I was quite disappointed after finishing the final one and coming up way short to buy the Exalted Orb. While an Exalted Orb would not have bought me everything I wanted. I could have gone on quite the shopping spree and upgraded most of my gear.

Thankfully the loot gods took pity on me. I ended up looting an item I at first thought was just another worthless unique. As with every league I checked just to make sure before sending it back to where it belonged. Oh, I was wrong.

The base item itself was going for around 5 Chaos Orbs. Not an insane amount but that is not where this story ends either. The item happened to have rolled quite a high number for one of the stats. That can be where some money is to be made. Instead of just getting 5 Chaos I got 45. Which is about half of what an Exalted orb is at the time of writing this post.

After that, it was time to do some spending. 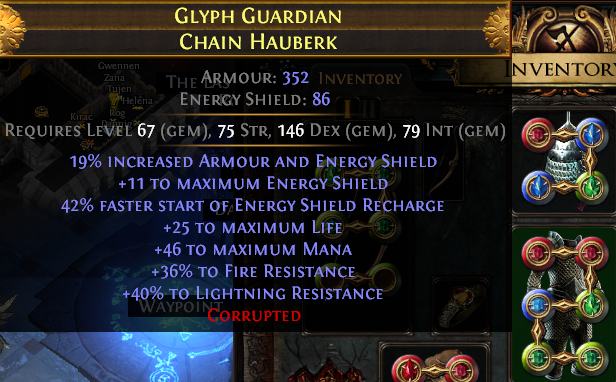 I picked up a 6 link chest that had some decent rolls for resistance I needed. It felt quite strange at first not buying a 6 link chest for my main skill Toxic rain. Instead, it was for my ballistic totem toxic rain setup I was running.

I don’t normally play a bow class so it was a bit different having two 6 link setups I needed to find gear for. Sadly a needed bow improvement was out of the reach for my budget and ended up being one of the slots I skipped over.

Moving my totem setup out of my helm and into my chest armor meant it was time to do some skill gem swaps and ensure I can get everything else back into a proper place. Thankfully my chest piece was holding a few gems that did not need to be linked so I saved trying to resolve them for last. I next went for the gloves since I found a decent deal on them. I also went and picked up a bunch of new skill gems I needed to level up. I know it’s not ideal to not have had them leveling up I just didn’t have the room and I already had a few in my second weapon setup slots.

My main focus was resistance. I was just going for my lowest once for each upgrade at the time and aiming to get two resistance upgrades of them I could. Finding a four-red socked linked item for a strength item is cheap and easy to do. 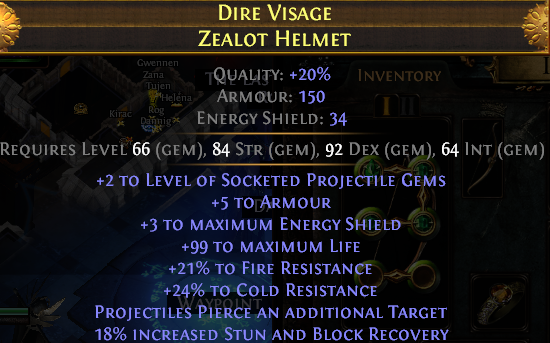 For the helm, I ended up finding one with some crazy stuff on it as the cheapest option on the market. Sadly the bulk of the stats are going to waste and perhaps I’ll be selling this item for more than I bought it once I upgrade. The life roll was quite sweet to find for the price I git. I’m also rather glad I went on my shopping spree before I ran off to do my Merciless Labyrinth run later that day. At the Labyrinth, I ended up having an option to enchant my boots with a 12% attack and cast speed on a recent kill. I feel quite lucky getting that on a pair of boots I’ll be wearing for a while.

I made some smaller upgrades for my jewelry slots to fill in my last remaining gaps in resistance. The biggest thing I was struggling with was having enough main stats for my skill gems. It was a bit of a tight squeezing and I ended up crafting onto my gear 2 +16 strength stats to make it work. Not ideal but it works for now.

The gear shuffle when you want to upgrade things always feels like you are putting together a puzzle. So many things you have to keep an eye on and be careful of. Thankfully things worked out in the end and I still had a few chaos orbs left over for future needs. I consider this goal success for day 3. 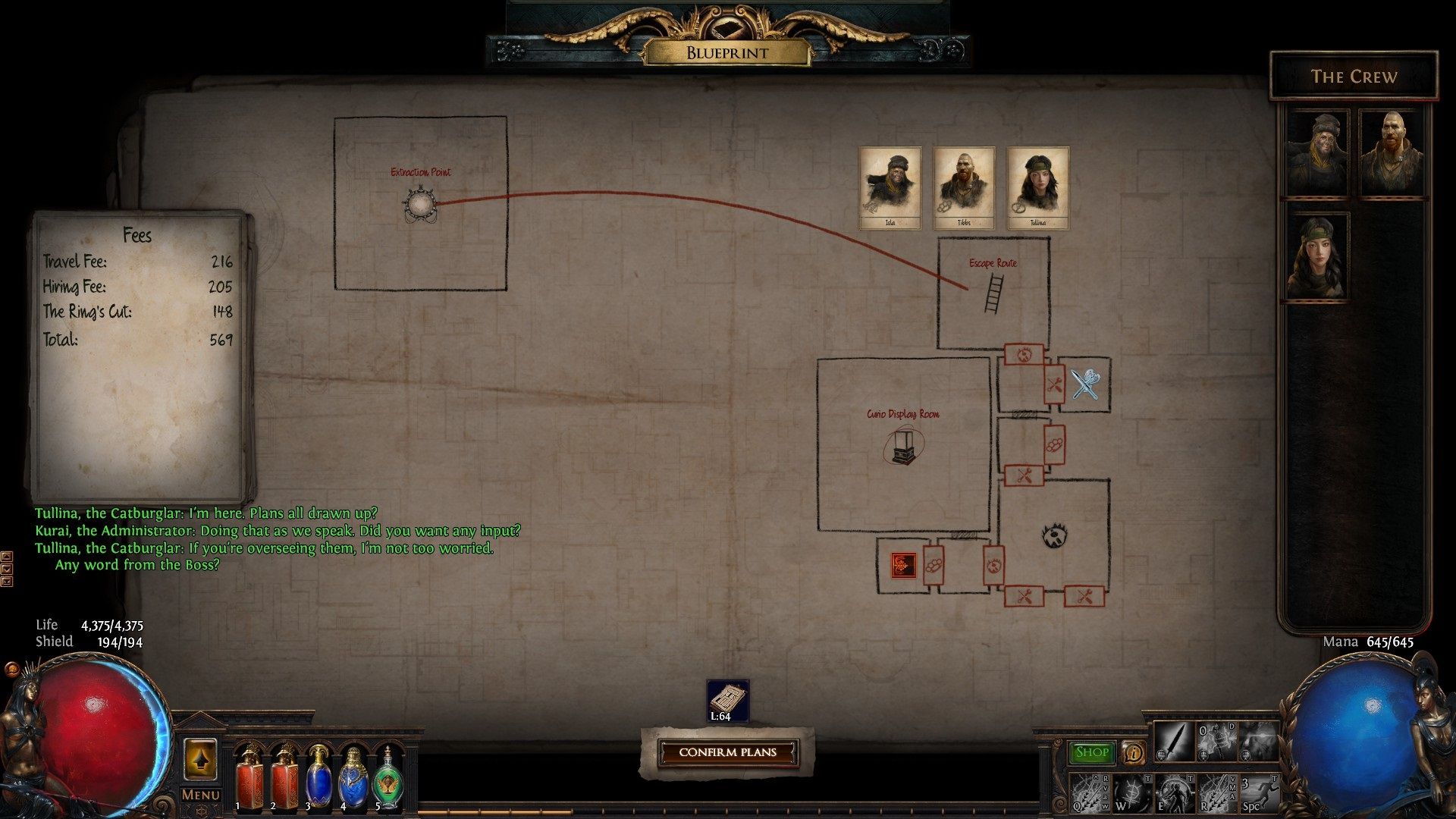 While I don’t think I would have liked Heist when it first came out back in the day. I ended up looting quite a few contracts to run some so I thought I would give it a try. With some changes, I’ve heard of that make it what it so today. I rather enjoyed running quite a few of them.

I also had another motive for running them. I was out of Alchemy orbs to use on my maps and I did not want to trade with other players to buy some more. Heists from my limited understanding are supposed to be a great way to farm some currency. 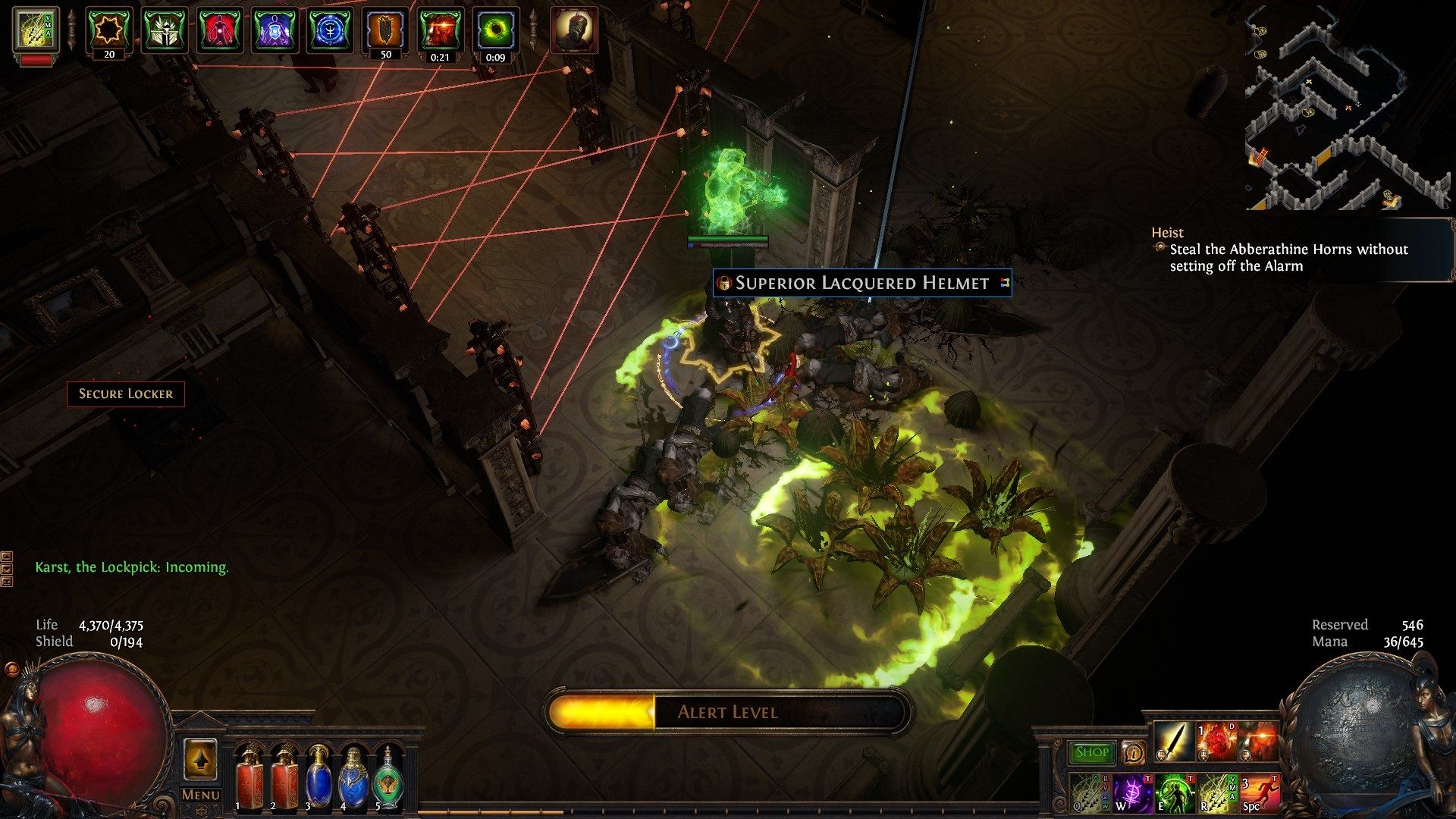 I’m willing to admit I’m still quite a noob at running them. The higher-level ones once I finished off the lower ones I had felt a bit hectic. There are just so many monsters to kill or run past trying to escape once you steal the main object.

Heist cranks up the pain factor when you get killed. I died twice while trying them out. Man was it painful seeing all the stuff I stole spill out onto the floor if I got killed. Thankfully I did not have anything crazy valued.

It makes me wonder if people spam run them and just don’t finish them so they can escape without issues? I did not think of trying to do that the time and seeing if “failing” that way would result in me losing all the stuff I looted. If I just end up not making back the coins I spent to hire the NPC and the heist cut I’m fine with that. It was however quite fun running in. Stealing as much stuff as I could. Telling the NPC I had to hire to disable lasers or break down doors. All in all, I had quite a fun experience and I’m looking forward to running more in the future. 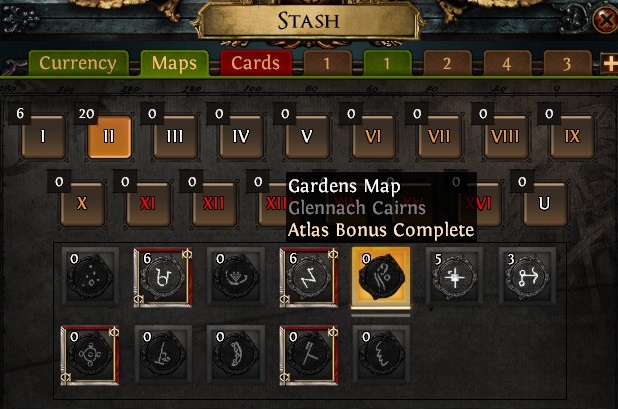 Out of all the things I wanted to accomplish for the day this one left me feeling the most disappointed. I was never one in the past to focus on sustainability farming for a single map so you have loads to run. So it’s not shocking things went the way they did.

What I needed was a bunch of Garden map drops. What the game did not want me to have was the Garden or the lower map tier Haunted Mansion map for a chance at them. Perhaps I’m just doing things wrong.

I ended up having to buy my first Garden map. I also made sure that it was the only tier 2 map I have completed. From my understanding than I would only be getting it as a tier 2 drop while running the garden. Thus in hopes anyway of having an endless loop of Garden maps.

The garden map drops the Porcupine division card. With six of them, you can turn it in for a six-link short bow. Assuming you get the socket colors you want or attempt to roll them you go from there into crafting a bow. With the ability to keep farming Gardens for more of the cards to make more bows and mess around with them in the Blood Crucible as well.

For a while, I was hoping I could just buy a bunch of the Garden maps and see if I could get things rolling that way. The issue is since a large number of players also want to do the same thing by the time you contact someone selling these maps they are already sold out.

I even bought a few of the lower tier to try and get some Garden map drops of my own. At one point on top of using an orb of alchemy on the maps as I always do. I was even using chisels to increase the quality of the map.

It ended up not working out. I’m at a point now where I’m just tempted to run all the other maps I have and move forward with my Atlas progress leaving this idea behind. I might just give it another day or even see what if anything I’m doing wrong.

All I do know is the game seems not willing to give up the goods for what I want. I can go run tier 1 maps in a different atlas region and it will be raining tier 2 maps for that area. Yet when I’m in the correct region hoping for some garden drops I don’t even get the lower tier maps.

I do believe the Porcupine division card can drop in other maps as well. They just have bigger loot tables to drop from. Maybe I’ll try changing up my tactics and going that route. Even in a couple of garden runs, I was doing. I got the other division cards for the map and not the Porcupine card drop. Overall it was a decent day. I got quite a few upgraded I needed. Along with trying out a few new things I have yet to experience in the game. I am a bit disappointed I’m no closer to acquiring a massive bow upgrade that I need than I was the day before. Perhaps I’ll give trying to farm for a bunch of maps I need one more day before moving on.