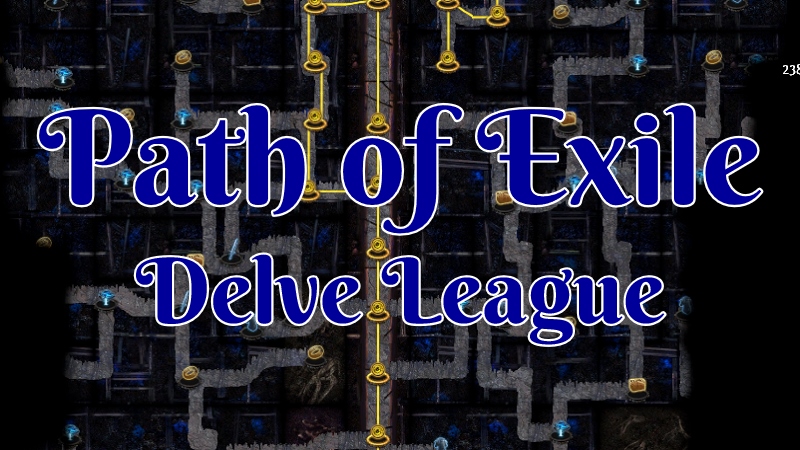 It has been over two months since my first thoughts on what Delve league would be like. Since it has been well over a month now with it being playable I thought it was finally time to get down to sharing about it

I have been playing it on and off and while it’s fun I have more than passed that point of just being burned out on the game in general. I really love how the endless map worked out, the progressed in it, the struggles of keeping things upgraded enough and the rewards that I have been able to acquire. There are also parts I just never got around to or even cared that much about.

Delve is the current league out on the free to play game Path of Exiles. Every few months we get a new league and the former one closes. They always bringing in new mechanics, challenges, and can sometimes toss everything upside down inside of the game. This one, for the most part, had its own entire zones so the player was left rather unaffected if you just were not into it. 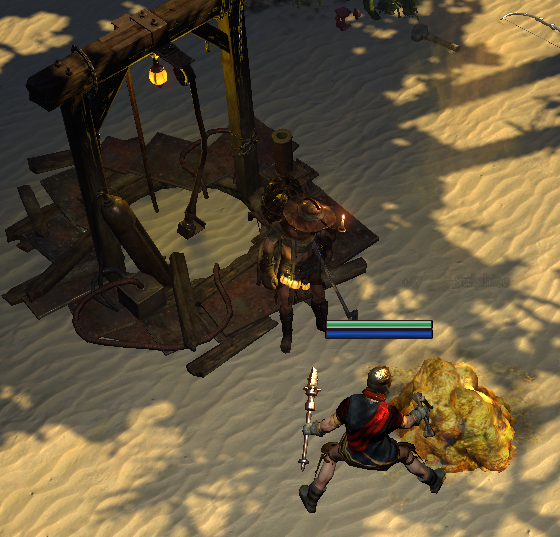 On the surface, either in the normal zones or in map zones you would from time to time come across a Voltaxic Sulphite Vein that you could mine just by clicking on it. Doing so would spawn the NPC Niko The Mad. You can either use him to go down into the mine (in non-map zones) or from the map screen at any waypoint called my Encampment.

Outsides of this above ground interact that is it. You are left to go about your business. No getting annoyed by powerful monster chance you across the zone, nothing to interrupt your gameplay beyond what it is. You also have a maximum amount of Voltaxic Sulphite you can carry which can be increased. 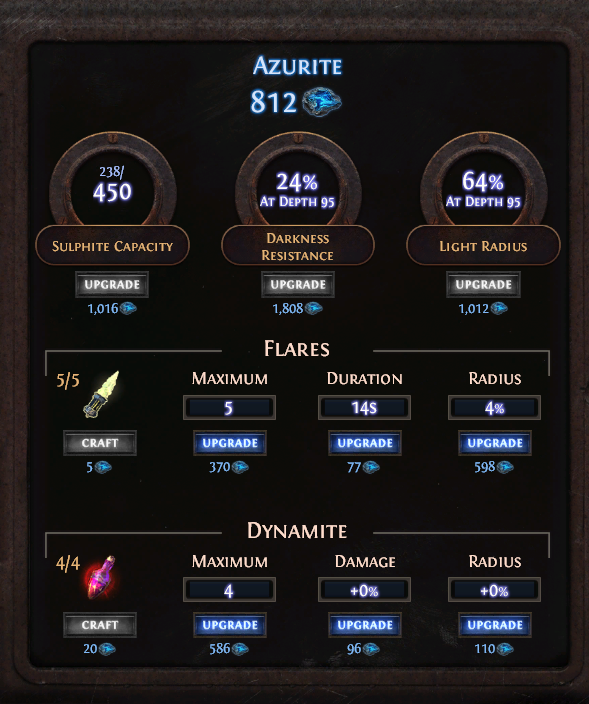 This was a really small but important zone. It housed the Voltaxic Generator to buy upgrades from, The entrances back to the surface and the way down into the Subterranean mine. Outside of that just a chest and the only thing that ever changed about the zone was the Generator grew in size as you bought upgrades.

I really like once you are down in the Mine Encampment that if you are coming from a normal zone you can exit a door and go back right from where you came from. Just as long as the zone is still open. I had it close quite a few times if I spent a really long time down in the mine itself. Most times as I like to farm till I had my Voltaxic Sulphite max out and would just be wasting it away if I had not. While I was concerned about waiting for it during the leveling process on the way to map the game just made its own path during certain key progression goals such as killing Kitava as far as I could tell.

The deeper you go the less effective all your upgrades become. As such you always wanted to get more Azurite to keep upgrading. I found myself mostly focusing on the light radius to have enough of an area around the Crawler to clear. Also darkens resistance so if I feel behind to give me a very short window to get back to some light or drop a flare.

You also had stuff like Sulphite capacity so you could carry more and the harder above zones also granted more. As such if you did not upgrade this from time to time you would be waiting a lot of it and not have enough to keep progressing.

With stats for things like the flares to increase the radius and how long they lasted. I never upgraded that much or the dynamites damage either. I did not spend too much time exploring in the darkness. I was more focused on getting deeper and deeper for the bigger rewards.

The Crawler And Subterranean 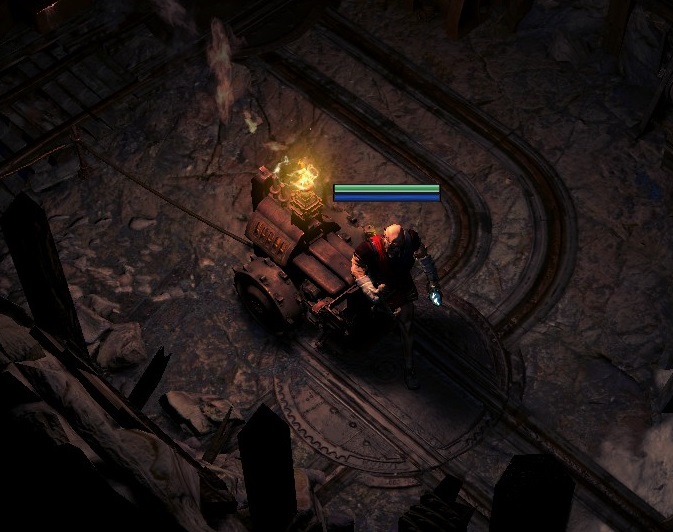 Voltaxic Sulphite itself is used to power up the Crawler. The deeper you are and further away something is the more it cost to power it. As you moved along trying to keep up with it started to consume the Voltaxic Sulphite. I really liked if you died along the way you were only out what you had burned up to that point. You still had to start over but at least it was not a total loss. At the end of following if you had to clear an encounter that it leads up to for that part of the mine to be unlocked. Failing to do so would result in having to do it all over again.

Many times it was more of a challenge keeping up with the Crawler and trying to burn down the monsters between you and the next stopping area. If you got too far out of range the darkness would start to damage you resulting in a rather quick death. So you always wanted to keep up with it. The device itself also would speed up if you got ahead of it. This was nice when you had an easy clearing time.

Once in a while, it would lose power and you had to run to it and hope it would turn back on before the darkness killed you. Also along the way, if you found anything to loot I found it best to wait and go back for it. Trying to loot a chest while it was moving forward normal result in you falling far behind the light and getting killed.

I was expecting the Crawler to be rather lame to have to follow around and watch it laid rope with lights. I found out I was wrong in my thinking of this. It was just something different and rather fun. Perhaps if I had played more I would think differently.

The kind of destinations you could pick would have at the end chests filled with armor, or weapons, or currency or Azurite among other things. You could choose to keep doing deeper for a harder challenge or move sideways. 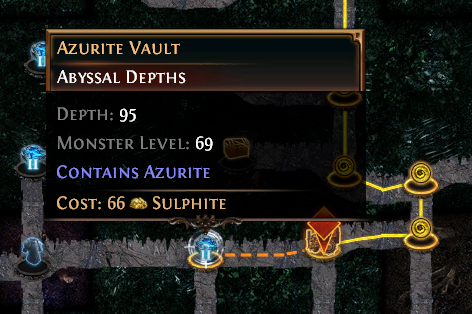 Azurite itself is another currency that is needed to buy upgrades at the shop. You could somewhat tell much of it was at the deposit site by how many lightning bolts were shown in the cloud icon. With one just being the lowest and three being the most. Often times I would go out of my way to farm more of it. Since it was easy to fall behind on upgrades. I really liked the balancing act of choosing to move sideways or going back to get more vs. pressing forward for better loot. 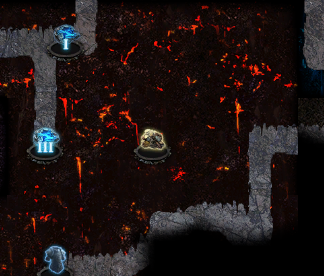 There were also hidden rooms you had to blast open with dynamite and use a flare to do so. You had to find the hidden walls that allowed you to do this. Often times the hidden areas had a few different possible locations on the map. I found myself running and looking at a few locations to find the one. Once the location is opened up you could just pay to send the Crawler down the new path.

Different Kinds of Rooms Down There! 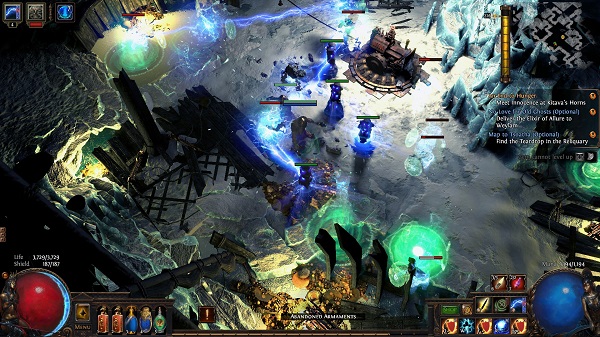 During my journey, I ran into a few really cool rooms and areas down underground. Here are just a couple of screenshots of some of the wonder and aww that awaited me while progressing. 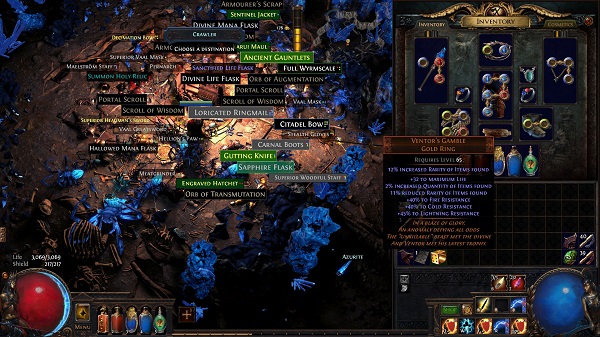 I looted my first ever Ventor’s Gamble ring in one such trip down there! The rewards were quite nice that I could get many times with a bunch of loot just dropping from each encounter and sometimes it had great resistance or life on the items as well! 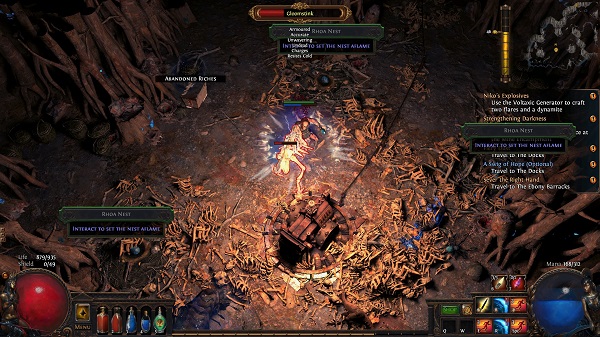 This one had a fun encounter of opening up the nests and having monsters spawn out of them. Each different kind of loot room had their own feel to them. After a while, you could predict what kind out outlay you would be facing and even some of the challenges. 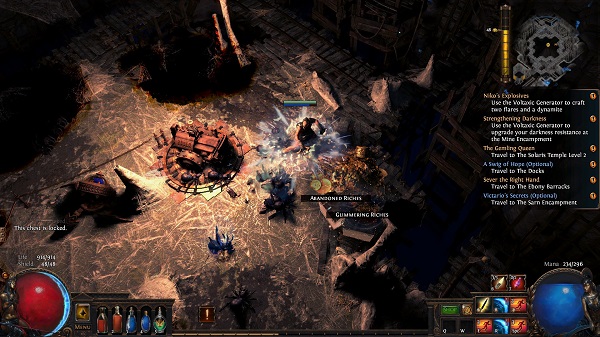 This one happened to have currency as a reward. I got some Chaos Orbs and some lesser ones out of this particular one. They can be rewarding going out of the way for. 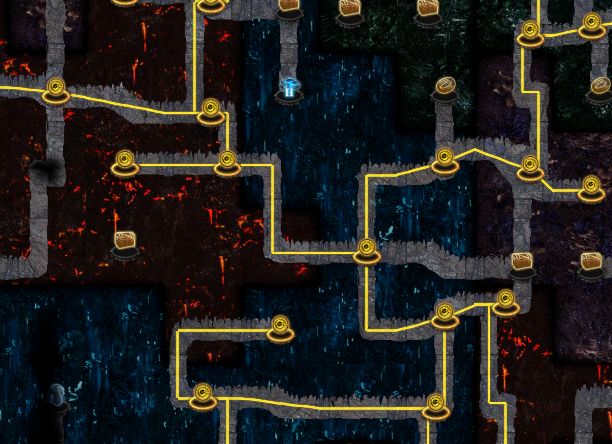 The map itself did seem endless. There was no resetting it or losing it on a crash or on logging out. You kept saved what you uncovered. Which I found quite a crazy idea to give such a thing for exploring and adventure. With it being auto-generated you got a feel for what was coming up and many of the same art assets where reused. This is to be expected. Still, I found that rather an amazing feat for a game that started back in 2013 with how far it has come.

There were many different areas down there such as magma fissures (red), frozen hollows (blue), abyssal depths (green), forests (brown) and an endless amount of others.

Some of these areas had a bonus to things like pack size, quantity, different mods on the monsters you were fighting. It helps to change up things and kept you looking at the map to see if you had a better deal by going down a different path when you had such an opportunity. 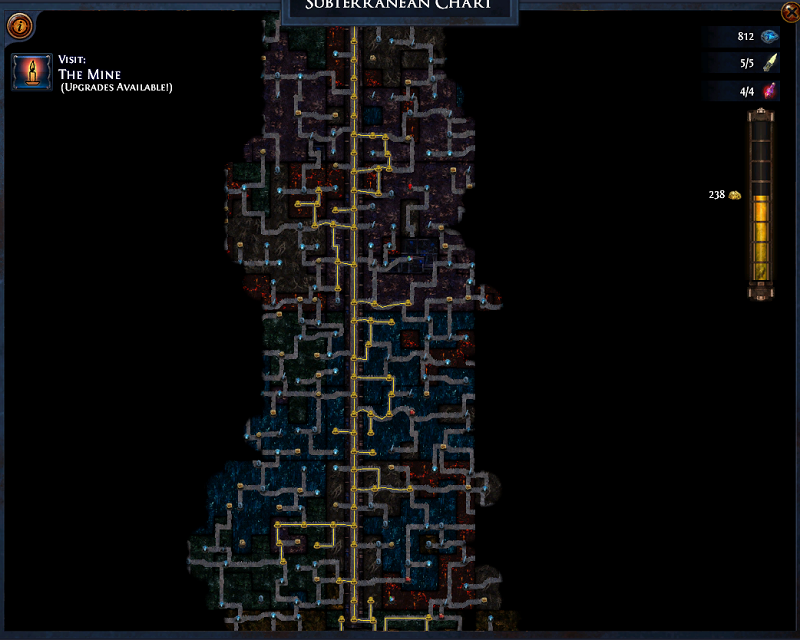 As I was playing the game made this long shaft looking line right down the map. I guess they were expecting me to be much further then I was at my level. That saved me a fair amount of time while also showing a lot of the map. Giving me a cheap opportunity to pick and choose what I wanted while skipping over what I did not. While I progressing deeper down and unlocking upgrades as I needed them without feeling like I was far behind in affording them. 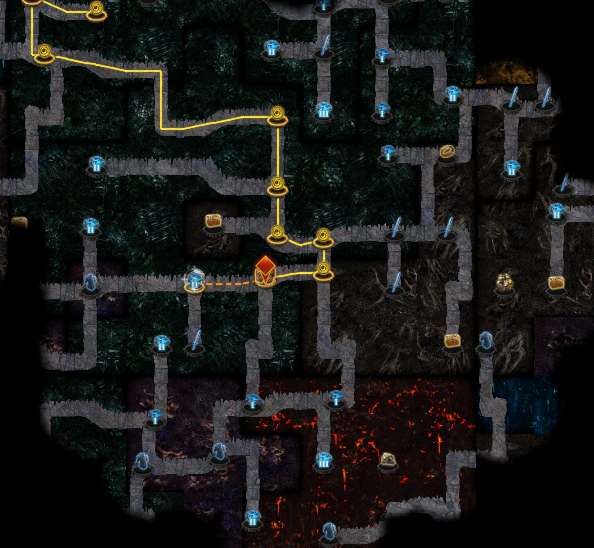 I took mostly a break from this league and have no plans to play this game anymore till whatever the next league bringing. While this league was quite fun for what I played. I am almost far beyond burned out. It is also a lot of grinding in this game so many hours I could be spending doing other things. So I never did get to things like crafting with the fossil that drop and some other stuff as well (it upgraded your gear to have a specific modifier on it depending on which fossils you acquired.)

The furthest I made it was down to depth 95 at only monster level 69. I know there is much more waiting for me beyond this point. I just need the break. Still, the game is f2p and I would recommend it for anyone who does not have 1,300+ hours like me already into it to have a go at this league. That is quite a crazy amount of time for me only spending $20 ever in the game. Which really shows you doesn’t have to spend anything at all or very little for some quality of life if you choose to on banking space like myself. Otherwise, it’s just cosmetics and skins with a bonus to anything gather then how you look.

For anyone who is still playing I hope the rest of the league is a lot of fun! Maybe I’ll be more active in the next one.