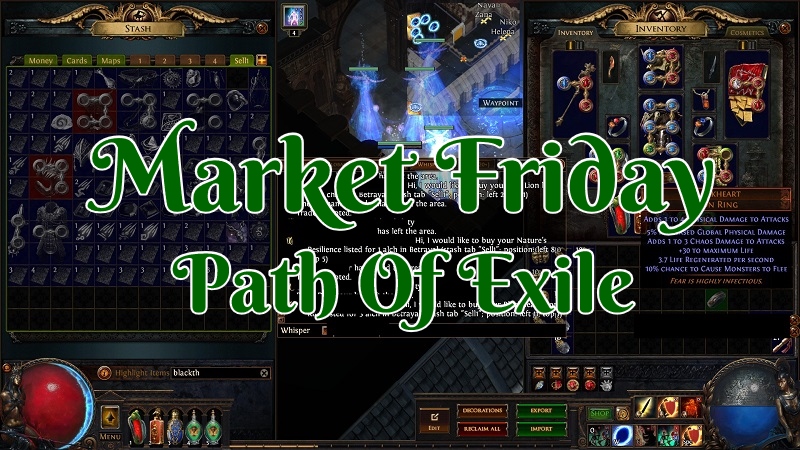 Been a while since I’ve invaded one of these with a gaming post! While it’s more like market Sundays for me where all the players are out and about buying and getting set up. So, when they come home during the week they can just sit down and game! I felt it was fitting to share a bit of some craziness that pursued last Sunday one of my biggest market days to date. Along with some of my biggest trades over that weekend. 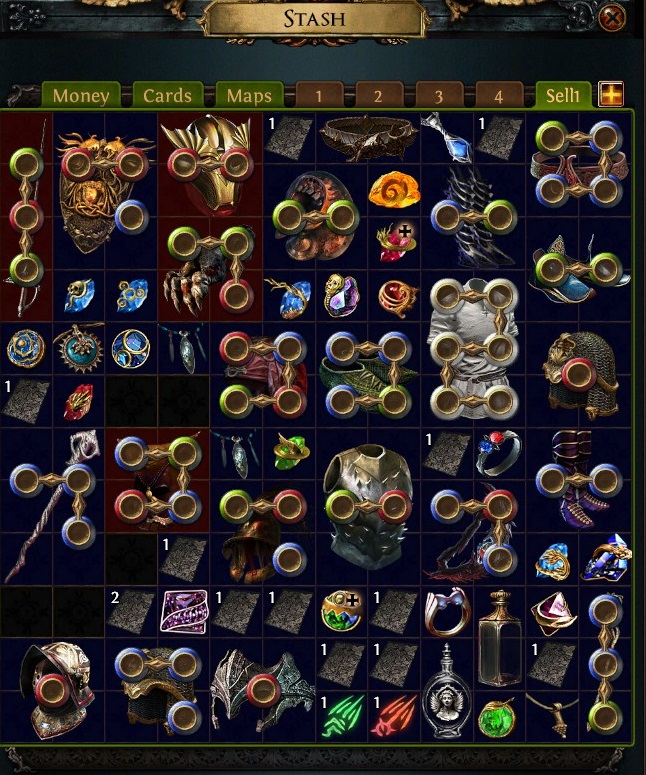 As often times during the many past weeks I was too lazy to try and price or list new items for sale. I also had a necromancer I wanted to gear up since he now could wear much better gear. So my own stash space just becomes overflowing with items that I may or may not try and sell. Unless I was for certain it was just junk or I was just too lazy to think about it. 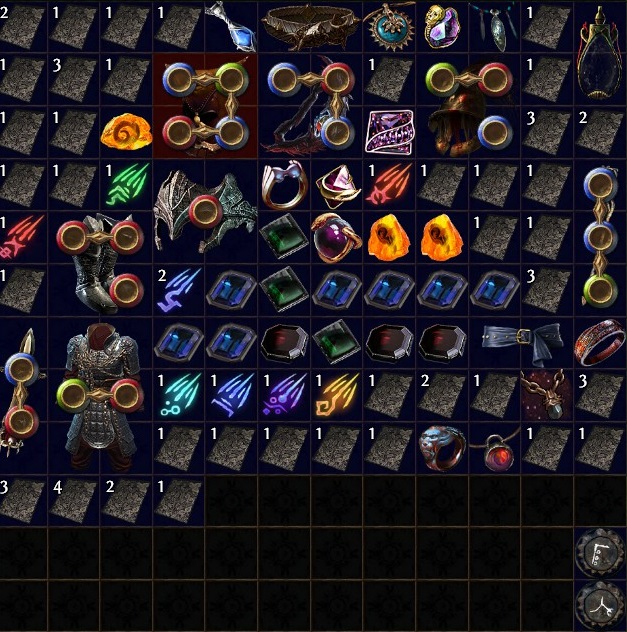 There are a few different kinds of items I sold, armor, weapons, cards, jewels, and other stuff. After a little while of cleaning up my many tabs, I started to move in items as they sold to the one I have for selling. Everyone in this stash tab gets to pick up by the game’s API and listed on a few different websites that pull information from it.

Then a player contacts you in the game trying to buy the item. If you agree you invite them into your group and you meet. Most of the time it is in the seller’s hideout. 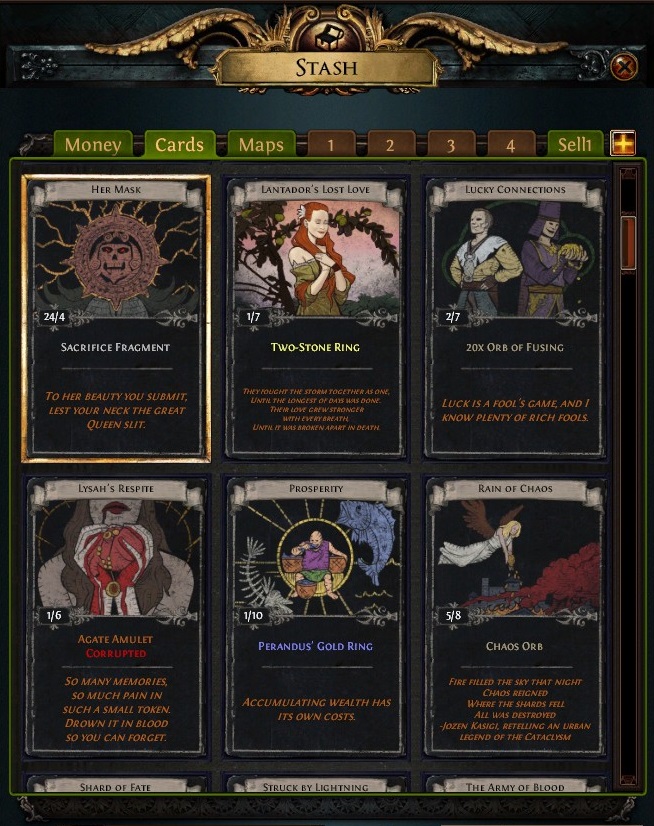 The cards themselves you need to collect a set and then you turn them into an NPC for whatever the item that card awards. While some of the cards might tell you exactly what you get like 20 Orbs of Fussing (used for linking sockets on items together) others might give you say a random belt out of a pool of possible belt. Most of these cards have a bit of a gaming style of risk to them since the people buying, collecting, and turning in are hoping for the best possible item. While myself the seller just wants currency right away and not having to take a massive risk.

While most of the cards sold for around 1 Orb of Alchemy (around 1/3 of a Chaos Orb) there were a few that I get several Chaos for. As such, I can’t just wildly toss them up into my single sales tab that I own. I need to check comparable on a site like PathofExile/trade to see the comparison of what everyone else is selling an item for. Then decide do I undercut, list as same, or do I think the item is being undervalued. 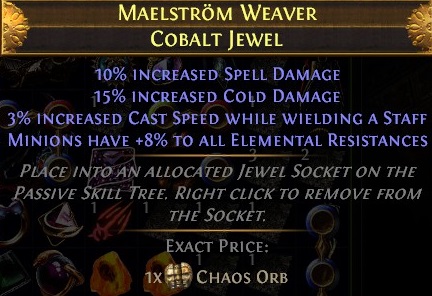 These fit into a player socket in their skill tree and provide some kind of benefit. They can be a bit more complex to price and take longer to look up since there are so many different ranges and different kinds of stats that could be listed. Some are vendor trash and others could be worth a small fortune.

I always find these a bit hard to price as they require deep knowledge in what class builds are popular and what they need for that build. So I start now that I think is the high end and I reduce my price every half. Lowest I ever go on any of them will be one Orb of Alchemy. Since they only take up one slot in my stash tab I’m not too concerned if they take longer to sell.
I had a lot of these up for sale and other tabs full of them. At end of the day, I tossed out some of the more junky feeling ones just to clean up some space. Some of them could be such a rare use case it could take weeks till a single buyer contacts you looking to acquire it. Unless it’s worth big bucks I don’t always hold onto them. 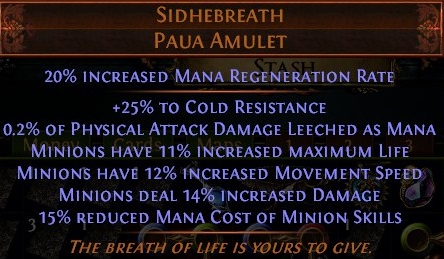 One of the faster-selling items that I tend to get a few of are what I would call leveling items. Most of them like this amulet has no level requirement or a very low requirement. While they are not worth a lot they sometimes depending on demand and supply shoot up in price a few times over.

My biggest mover happened to be Blackheart Iron rings. I sell them for three Alchemy each and ended up selling all four I had. I only place one of them at a time into the sell tab just so I can pull out quickie the one I have for sale and don’t have to make sure it’s the correct one. While they are rather similar there are some stat ranges and I don’t want someone to feel like they been cheated. I also might have a few trades going on at a time so I don’t want that to slow me down double checking.

Once I had a few items for sale set up I made my stash tab public so the API would pick it up and I could start getting trades while also price checking, listing, and dealing with a customer at the same time. Sunday was my longest day where I was at it for a few hours. 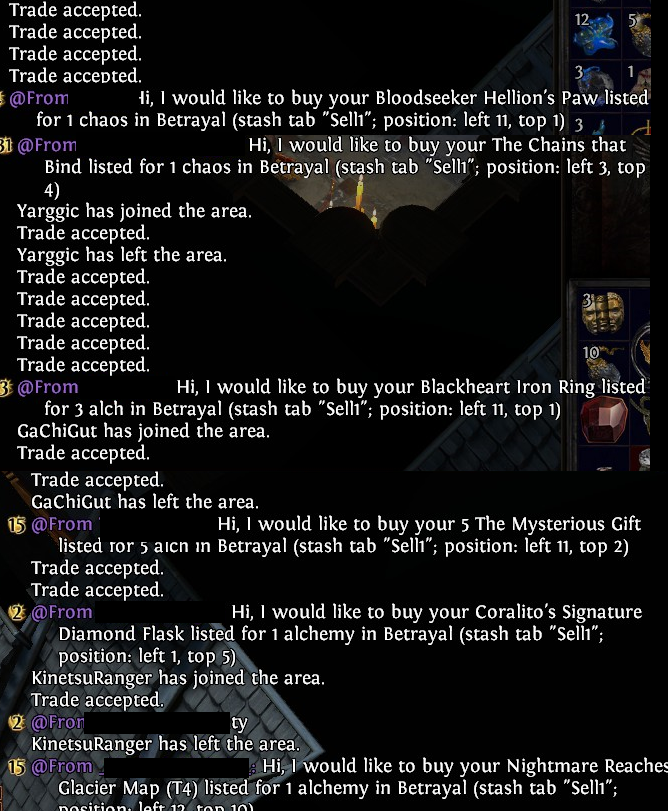 Sometimes I had no sale for 10 mins other times I would have three people lined up in my hideout waiting for the person in front of them to make the trade. These are just some random screenshots I took so you get the idea of the process of someone contact asking to buy an item.

Here is one of the random customers who joined my hideout and I’ll be trading with shortly. I was not running any maps at the time that was just the last one I ran. I like the looked of open portals in the upper left. There was too much going on I would never have been able to clean a map nine out of ten times. So it was just quicker to get a bunch of trades done all at once. 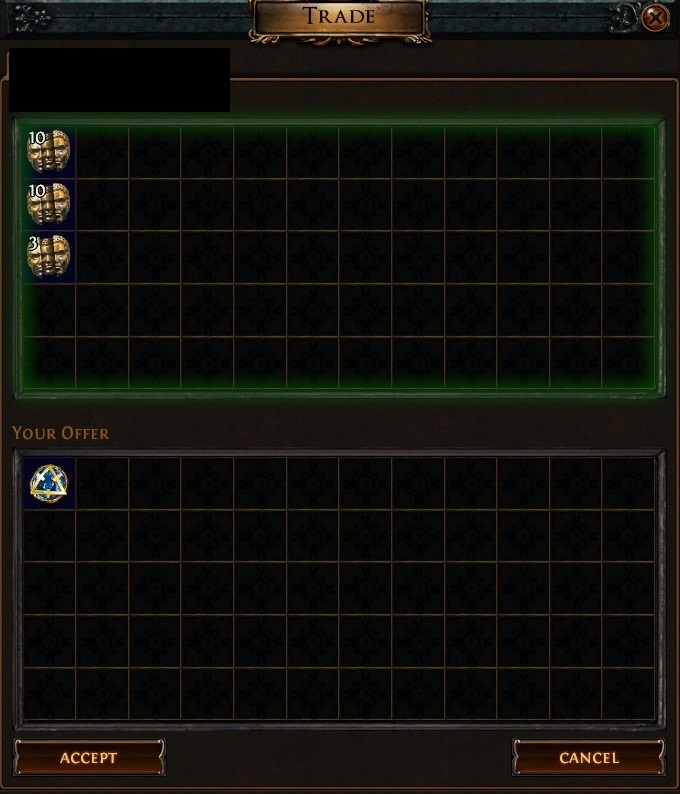 This was one of my trades I had that Sunday. The guy was buying an enlighten gem that grants bonus XP towards anything it was linked with. They are very slow to level up and can be worth a fortune. I got 23 Chaos Orbs for the deal and I did not have to do any of the extra work. Players are upgrading them when raiding the right Syndicate members but that more work then I want to do for it and beyond the scope of this post! 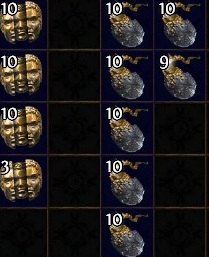 I ended up mostly selling a bunch of smaller items for one Orb of Alchemy each. They are the currency on the right-hand side. While I could convert those to Chaos Orbs the stuff you see on the left-hand side I will, in fact, use them. As such this saves me from having to do a few player trades to make the exchange.

All in all, it was a great day I made around 56 Chaos Orbs. While that not a lot I also did not have to do much for it. I also just find it relaxing as I get to watch some videos while I chat with people. Some junk I vender to just make room for later on. I now also have organized and more space to store stuff! Ah, the cycle starts all over again. 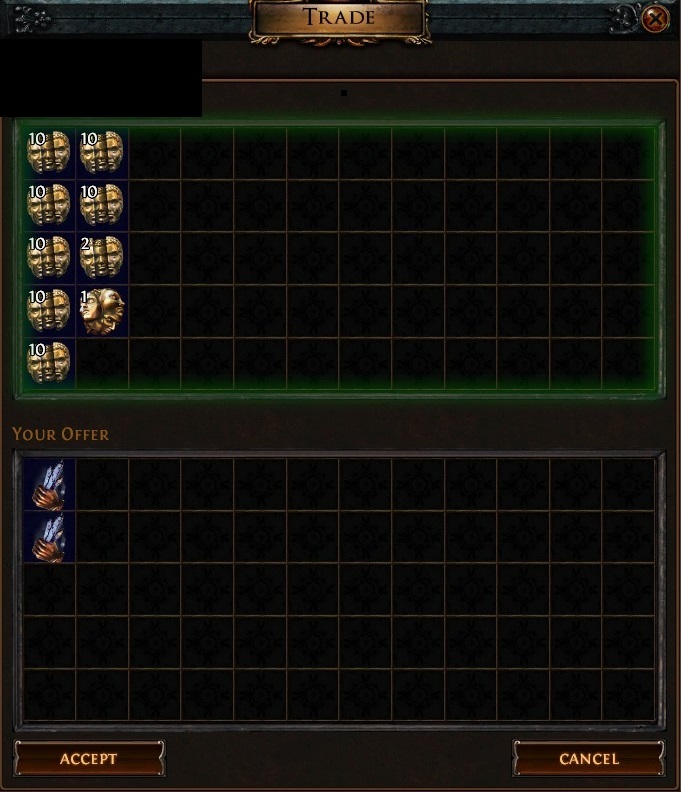 My biggest trade happened during last weekend as well. I punched 2 Tul’s Breachstones for around 65 Chaos Each and I upgraded them to Pure Breachstones which sold for around 126 Chaos Orbs each. Netting a profit of 61 Chaos Orbs each. Which was more then I made on my sale Sunday! Players trying to reach the level cap of 100 often times grind these out with very crazy gear hoping to turn massive profits. I’ll have to try one at some point. They are supposed to be a great experience. 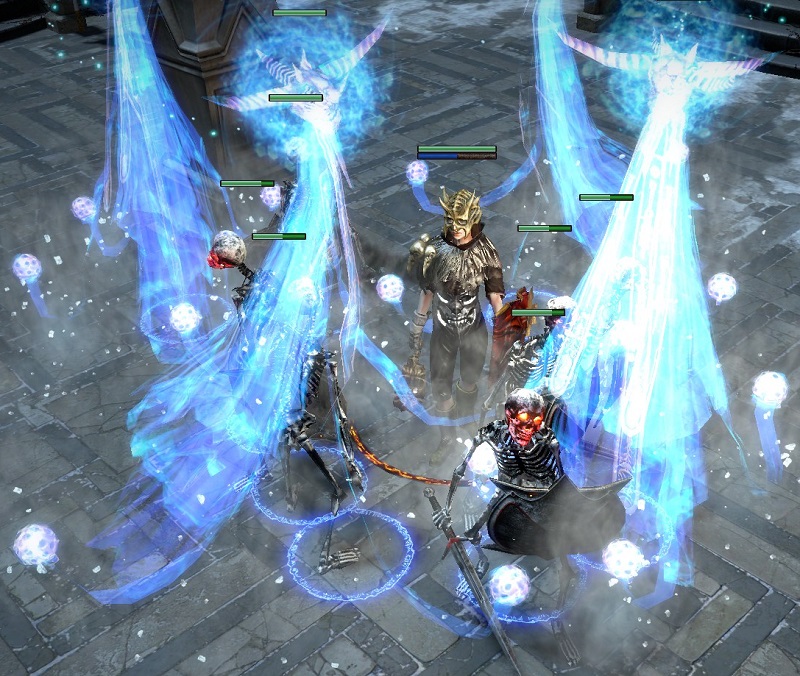 I also did some shopping for my newish alt that I been leveling up. She got a new chest that you can see her wearing in this screenshot. 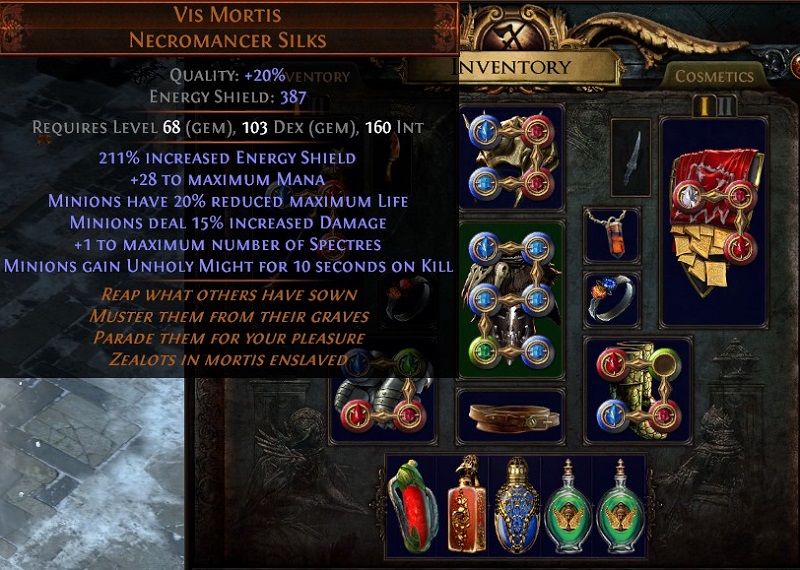 Most of these items that she is wearing I went out and just bought as well on the same day. The Vis Mortis Necromancer Silks where 3 Exalted Orbs (around 510 Chaos Orbs at the time). It would take many market days to make that kind of money back! Thankfully I luck out and have had two Exalted Orbs drop so far off monsters!

Everything else I bought was mostly ten Chaos Orbs or less. I upgraded some of it since so I don’t recall quite all that she had. I was mostly just looking to max out resistance and pick up some Dexterity for item and skill requirements.

I always have fun making one of these Market Friday posts. The ones I make are quite different then what anyone else shares. As most people are sharing about different markets they have around the world. As such I’m a bit off the odd duck out when I make a gaming post around it.

It is run by the very amazing @Dswigle! These are always treated when I have time to check them out. Have an amazing weekend!