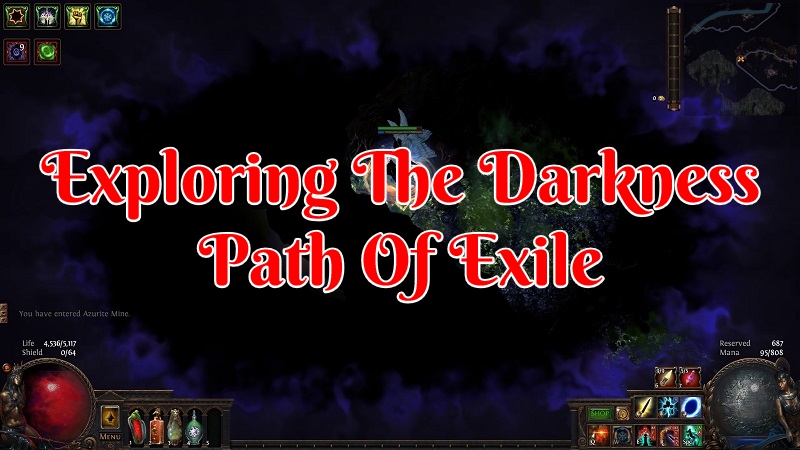 One of the things I’ve yet to do is explore the darkness areas of the mine looking for loot and danger. During the Delve league, this was also something I only barely touched on. With it being in the core game now I get to explore and enjoy it even more now. While I’m only at a depth of 120 that is also further then I was back during that league. At some point, I wish to go much deeper maybe as far as 900. To be able to do that I need a way to afford the high cost of acquiring Sulphite quickly. 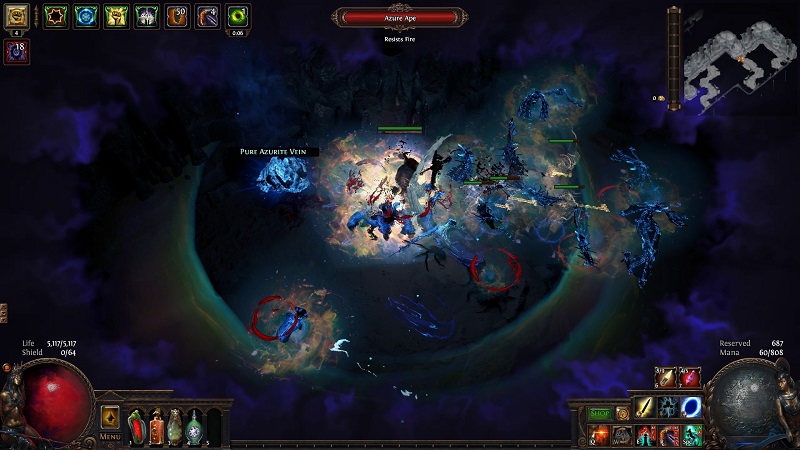 With Delve it is all about managing your light sources and trying not to get killed by standing in the dark areas with no light for too long. The darkness itself also hides things from view unless you are in it often times needing to be close as well.

One of the great things about going back over all my old nodes I’ve uncovered so far this league and brought the crawler (a device you have to power with Sulphite and clear the path while it moves to a new node laying down lighting) out to. Is running down the tunnels and checking every nook and cranny finding loot that was just out of sight or I simply missed. Everything from more flares to use while in the darkness to give me light, dynamite to break down the barriers, and even chests full of loot.

I also have my darkness resistance capped at 75% for the depths I’ve been exploring to ensure I last as long as possible. Between that, life flasks, my life leech, and in case things are going sideways drop a flare to create light source I can go rather deep while I’m spamming Whirling Blades on my Reave Champion. I still die a lot but that part of this whole process

Some of the best loot so far in the darkness has been behind barriers. Sometimes they can open up a node that you then can travel to and other times just a little loot room. So far they only have taken one dynamite to blast down and I even find enough Azurite lying around while exploring that I can keep buying more from the Generator. 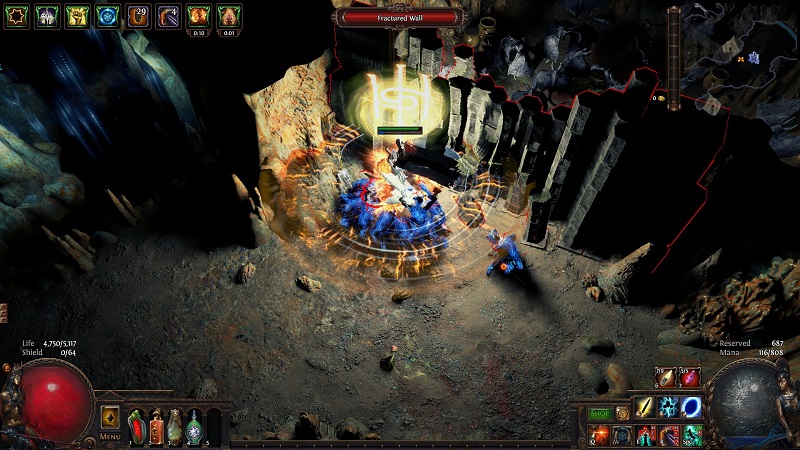 Here is one such barrier. You see it as this purple bluish icon on the map. I dropped dynamite and waited for it to blow up to take it out. 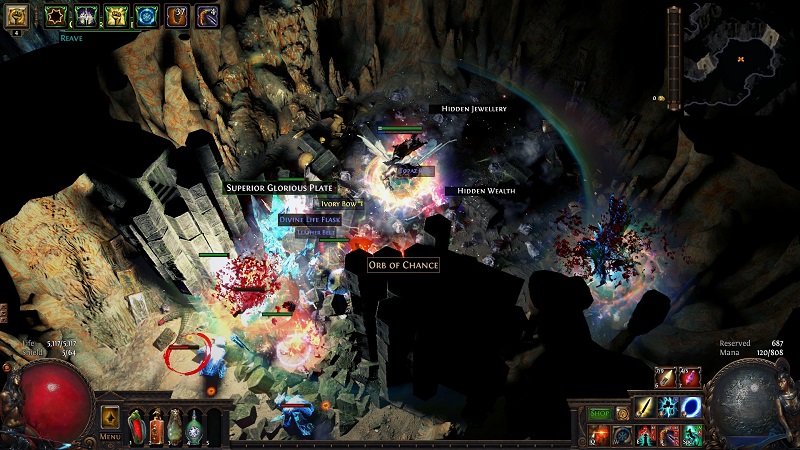 Here I am inside the little loot room. This one happened to have two chests a Hidden Wealth (currency) and a Jewellery that had some amulets in it 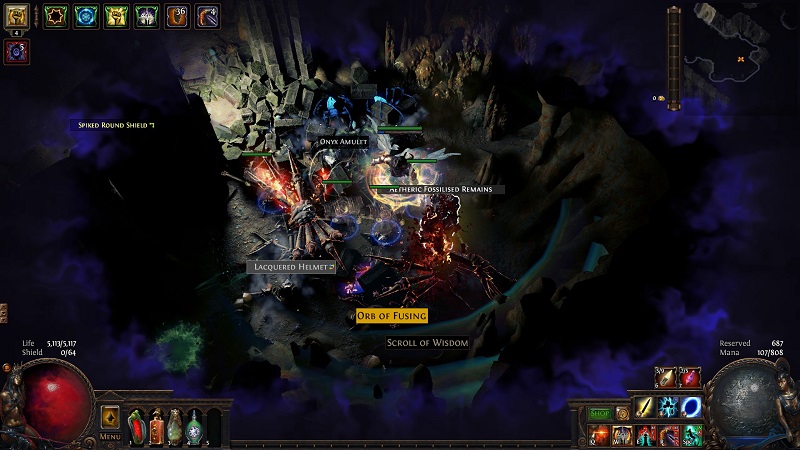 This one happened to have a fossil remains in it. It can drop other ones then states so I always open them up even if I know the one it states is not worth a lot. You can also see really well the darkness all around me as my flare is a little ways back.

The great thing is often times these barriers are only a couple steps too many a dozen from where the crawler laid down a lighted path from. As such you should not really be getting killed getting to these.

I do explore a bit deeper than that looking for chests and many further ones in. Many times I’ve realized I’ve gone so far I’ve found another node that crawler could have gone to. So that part is me still learning how far to explore before turning back. Some of this area are connected and can go on for a while. Many times leading me getting killed for venturing off too far.

Without a light source monsters in the dark do not get killed. As such with my build I do find myself sometimes having to waste flares to get some light and clear a path to move around in when I get pinned down or trapped. 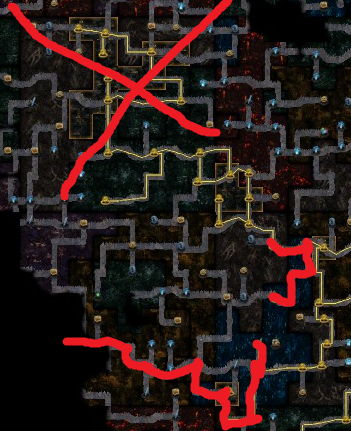 Since I have a massive map I’ve already uncovered the nodes to but have not explored the darkness. I’ve found myself getting a bit lost and going back over areas I’ve already clear out or least seemed to be that way. My solution to this was piecing together my entire map and marking my routes in red. That way if I get killed I know where I was. I still have lots of places to search the screenshot is just a tiny section of my map. Thankfully not requiring any more Sulphite!

I’ve also found it best to not go too far without starting a fresh instance. Otherwise, you hit invisible zone walls while inside your mine. Often times very close to another node that you can even see on your map. Since you can’t portal out you either have to run the long way back, get killed or log out and back in. So I just make sure that not an issue.

Otherwise, it’s just about making sure I’m loading up on flares, dynamite and I have lots of inventory space for loot. While my flare lasts for nineteen seconds since I’ve upgraded them that not a lot of time to be working out inventory space issues. Even more so once you leave you could you could be losing anything on the ground. 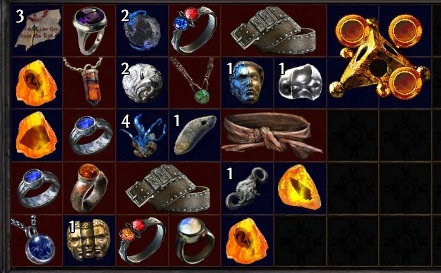 There is some really amazing loot just hiding almost in plain sight being covered by the darkness. While some of it can be a bit deep in other stuff you almost could see just following your path of lights laid down for you by the crawler.

I was mainly looking for

So far I’ve only spent last night and part of today when I had free time exploring the darkness. While I could from what I been getting make more out of Betrayal this is just so much more fun. I’m sure once I get more experience at it and go deeper my profits will go up as well.

A number of the fossils are worth a few chaos each. There are 25 in total and they are used in crafting. Metallic, for instance, can fetch right now five Chaos. While a Frigid just one Chaos. You also have a bunch not worth trying finding a buyer for in my opinion such as Aberrant. For the most part, this has been the bulk of where I have been pulling in my profits from. 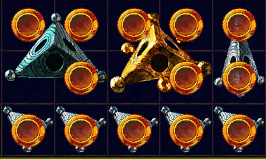 The Resonators are where you insert the Fossils into. As such they don’t have as high as demand and the one worth the most seem to be the four socket ones that I got twenty Chaos for. Everything else at least from what I have seen is worth around an Alchemy or not worth the time it seems. Many times just to save space I sometimes only look for the four-socket ones. I’m still learning and looking up prices as well. These can start to take up a fair amount of room.

The really great news about Fossils or Resonators are crafting, for the most part, are buying in bulk. More time then not when someone asks to buy either of these two types they want knows how many I have. When they don’t I simply state I have X amount how many do you want. Ninety percent of the time I get a reply back “ALL!!!” Which is just great I tend to set my sell stash to private while I’m down in the mine since I’m not trying to sell one hundred items one at a time with people bulk buying.

In total, I’ve made around 140 Chaos just going back into the old areas I’ve yet to explore from these two types of items. While not as great as It could be I’m still learning and trying not to die as much as I have been due to the darkness. 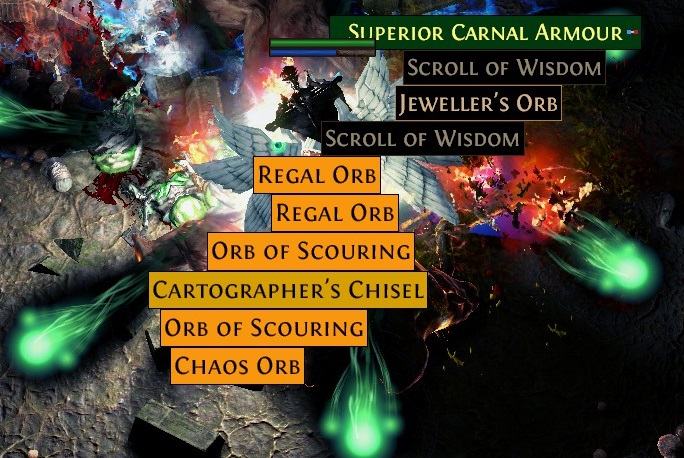 Then you have currency drops. While I’ve not had an Exalted drop yet from any of the chests many times I’m getting Chaos and bunch of other stuff. I like getting the currency right away without needing to trade an item for it. I have gotten one so far this league from Delve so I’m hopeful I’ll find many more. 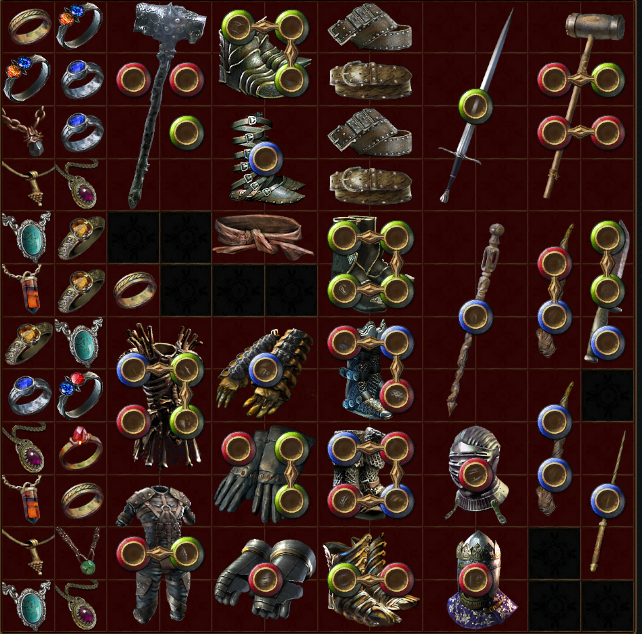 I’ve also had around thirty Chaos recipes worth of amulets, rings, and belts drop so far. Since each turn in is worth two Chaos once I get all the remaining items and these are the hardest to get I’ll next a nice sixty Chaos. I even had to clear out some tabs for my overflow of these three items. These will be great to have for when I’m leveling up an alt character in maps. I can just quickly dump and sell to a vendor without being short these items since they tend to have a lower drop rate. 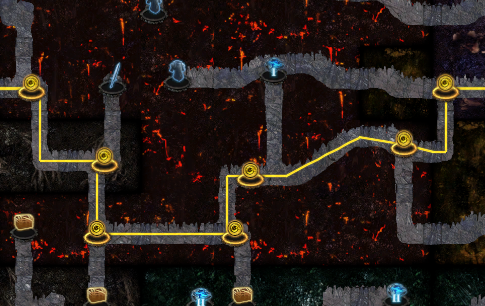 I don’t have enough experience yet to know what the “best” areas to the farm are. The Magma Fissure areas seem to be the best from what I’ve seen but I’m still just running everything. I’ve already spent the cost to bring the crawler out to those locations I might as well explore them.

Once I get deeper I’ll have things like Maps that will be worth a lot and even items that could be worth forty or more Chaos each. For now, I’m not very deep. I look forward to those kinds of thrills! It will be a little while since I don’t have a character quite ready for that kind of adventure. That kind of gear gets pricy.

My main reason to want to be learning how to dive into the darkness and what to look for to sell is to speed up my collection of Sulphite. Just finding on its own can take hours while in a map for small amounts. The alternative is buying Gilded Sulphite Scarabs or lesser ones and running them in the map getting Niko and his Sulphite nodes to spawn. Right now they are running about 35 Chaos each which is a bit pricy for what I’ve been able to earn so far.

I look forward to getting back into the Mine and exploring some more. There is always some thrill in what could drop and trying not to die. I’ve been enjoying this more than the current league's mechanics from Betrayal.