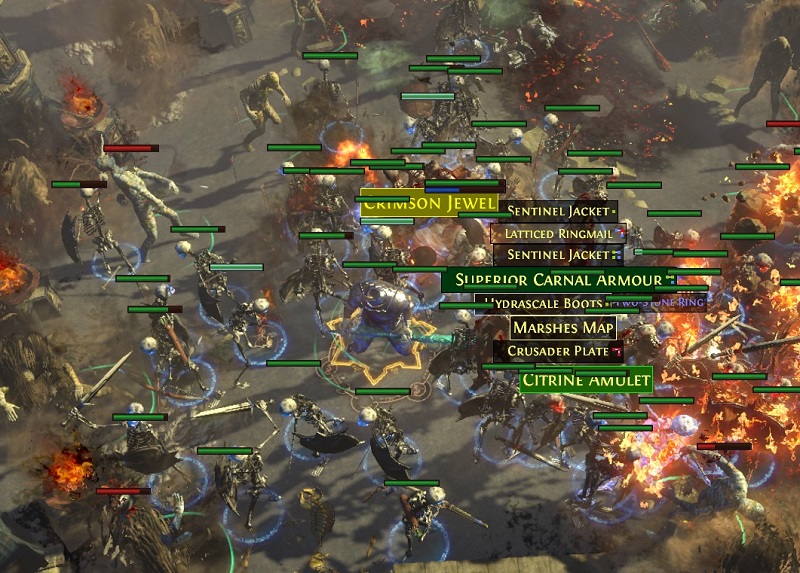 The really nice thing about having some currency earned is when you just feel like making an alt. I really wanted to see how playing a Witch Necromancer would go for mapping. So I spent some currency and off leveling I went!

In Path of Exile, there are great builds for starting off fresh in a league called league starters. For instance my Arc Totem Templar that I got to level 84 in the last update. Not to mention I can raid him for some sweet gear like his rings and belt when the alt is high enough in level.

A summing Witch called a Necromancer presented some new challenges for me. I'm not used to playing a summing style of a build. I also was not quite sure what if any stats passed off from me to the swarm of zombies, raging spirits, and skeletons I called down to do my evil bidding!

First order of business was to splurge on some level 1 gear for him so he can rock out to the bone throne in his own fashion of Necromancery. Was not quite sure what the best leveling gear would be. I’ve always found it easy to search the external trade using a filter of Unique for item rarity and Level max of 1. You then filter each item slot ring, belt, helm, body armor, and so for looking for things to buy. 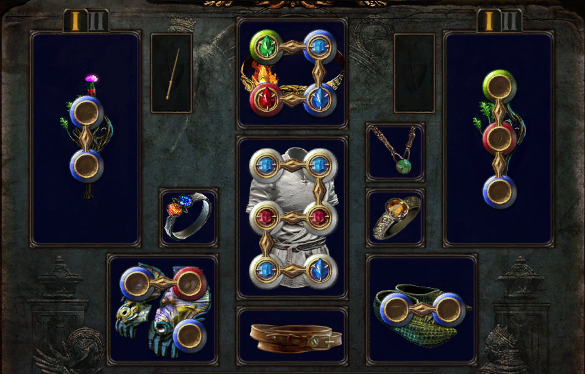 I knew from the start I would be picking him up a Tabula Rasa. The great thing about them is there is no item required for this item. It comes with 6 linked sockets that are white. So you can link any color gems you want in it. The only drawback is the item normally does not have any stats to it. People tend to buy them just corrupt trying to get +1 to socket gems. As such a non-corrupted one that I bought will retain a great value and sell fast just for that reason. I also might just keep it for other alts in the future.

I also picked him up two Lifespring Driftwood wands. While there spell damage would not be very useful after I moved out of using a starting skill called freezing pulse the cast speed was great for summing all my creators.

I also picked him up a Goldrim Leather Cap those cam with 30-40 all resistance. After I upgrade it to a new helm called Mark Of The Red Covenant that increased raging spirits damage I sold the Goldrim for double what I paid! It really is an amazing leveling item to have right away with all that resistance and some evasion rating.

Finally to start off with I just had some random low or no level requirement gear that I picked up for him. Wanderlust for 20% moment speed. Some random Locational Caress Iron Gauntlets for the cast speed. Later as he leveled up I added in some rings I had. Upgrade using the spare life and mana flasks I had from first time leveling.

Leveling was a bit slower than I was expecting. While he was great at taking out bosses in each act he was also rather squishy just trying to move around and dealing with normal mobs. I'm used to just shield charging with fort protection into a pack of mobs and killing them. He had to ease his way in and fast in front of him clearing as he went. 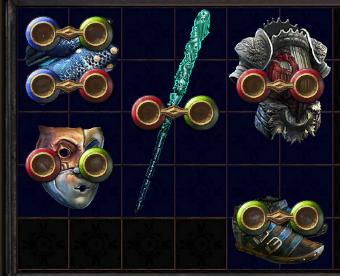 For the first time ever he was not the only one I had to buy gear for. After a while, he was high enough level to have an Animated Guardian. As long as they don’t die they keep using the gear you gave them. This means if you find some amazing gear that grants a bonus to party members you and your army now all have buffs! He is one giant walking buff magnet. The ladies love him. 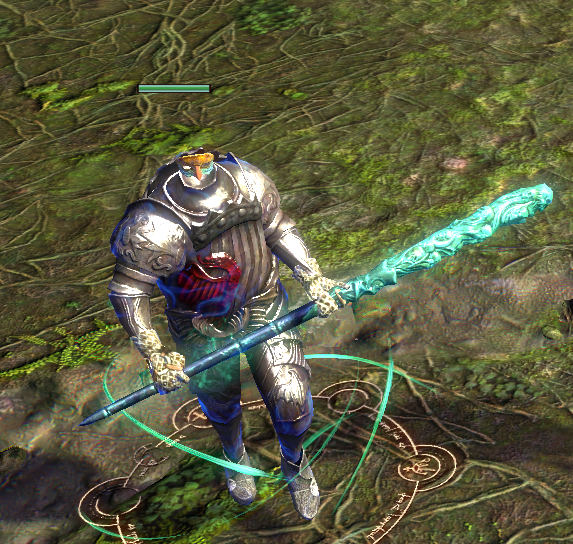 Say hi to Wimund The Forth. It was some pirate name I recalled from way back when. I thought why not maybe he will say yarr at some point. It just felt like a fitting name. Just don’t let him know he's the fourth of his kind for me. Thankfully the others were not geared out like he was. I waited a while to see how well I would be at keeping them alive before spending some currency on gear.

He is loaded out with some buffs, and things to keep him living. That giant staff he is holding is called a Dying Breath and it grants increased effects on aura skills and curses him and his allies cast. Next up is the body armor called Ambu’s Charge. that boasts an amazing 749 armor and 149 energy shield for survivability. Along with gaining and sharing endurance charges. He also has a Leer Cast Mask that grants nearby allies with 15% increase damage. Remaining items grant movement speed for allies and some more survivability for him. While his gear was not overly priced let’s hope he does not die. It took a while to buy everything from people. No one was in a trading mood last night even when I wanted to toss currency at them.

The nice thing about already unlocking the trails to run the labyrinths on a main is any alts you level up do not need to do it. A little time saver and I very much welcome it.

While I have not run his Merciless Labyrinth run yet I have done his normal and cruel runs. The kind of power he was packing I did not even try to take down anything that empowered the end boss. Instead, I just did my best to move out of his way and avoided taking any damage. I had also picked up Vaal Summon Skeletons by the second lab run so it was a bit of a joke.

I’m hoping to run the next one sometime this week and with any luck, I’ll find the three trails I’m missing to run the final one called Eternal. I’ve yet to run it so I’m very excited if I can do so this league.

Just the sheer amount of monsters this guy can pump out is amazing! Sadly his more mapping build focus less on the massive ball of death and more on having some amazing and quick killers. Othwerise, most of them will just die to fast in harder maps and not have great damage. It focuses more on cursing, buffing, and allowing them to do more damage as well. I just need to save up a fair amount to currency for the higher end things to get the ball going even more.

Here are a couple screenshots I got while I was leveling him up to maps. 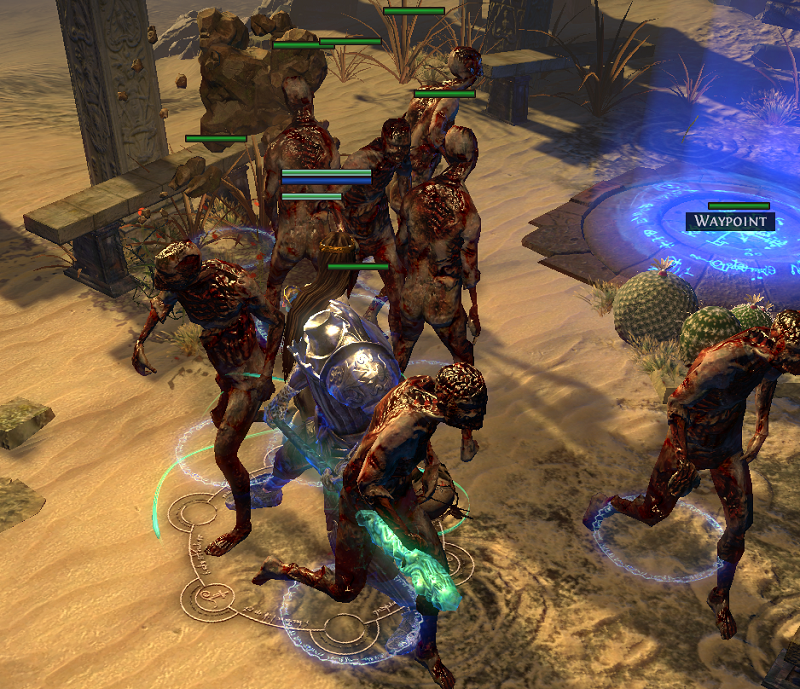 Tempted to keep the zombies around just to have some protection on my side. They are not so great and sadly the chest I’ll be upgrading to at some point will not have any sockets so just don’t have the room for them. For now, they get to stay. 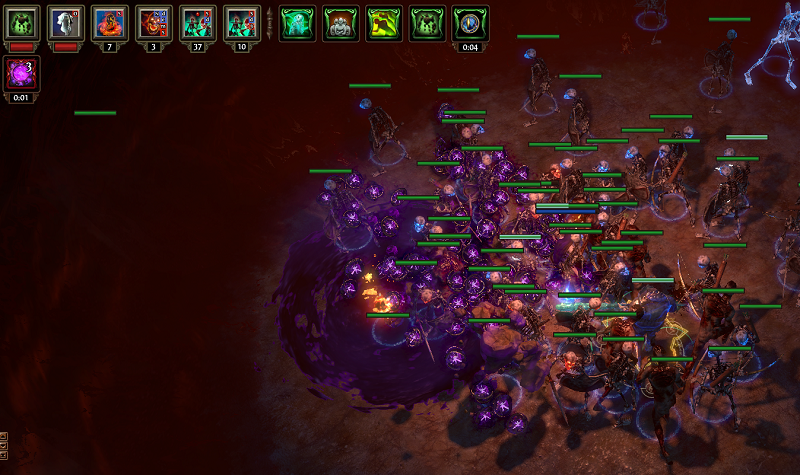 This massive ball of death had 59 monsters I had up and kicking while killing whatever his name was. That fight lasted not long at all. 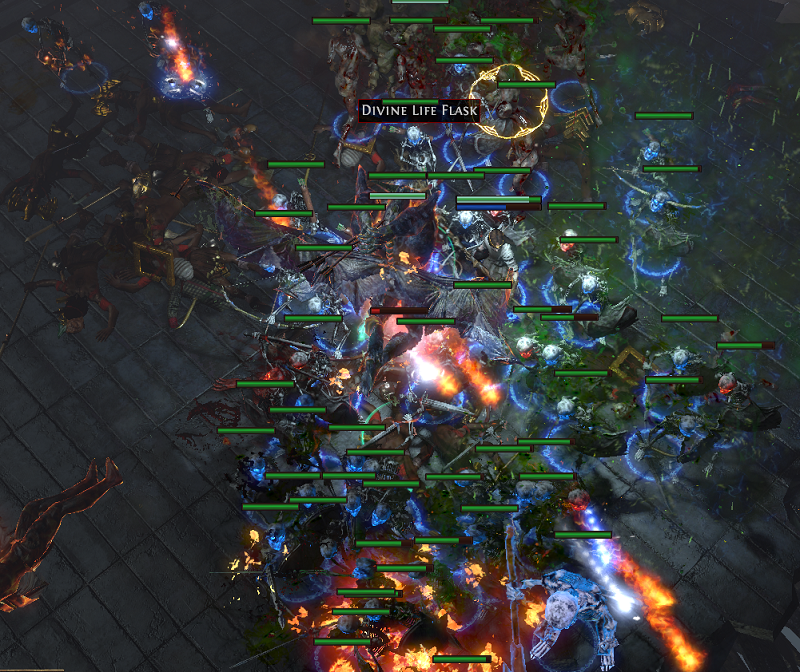 Here we were just talking a midnight stroll along a bridge. It was raining, we had some fire to warm us up. Overall I would rate this an 8/10 vacation spot. Just don’t mind the hostile monsters wanting to eat your face off and everything will be fine. 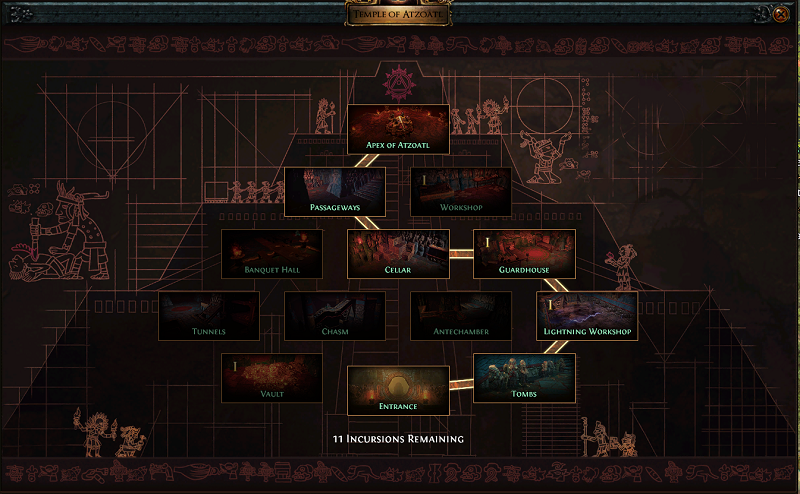 Just look at that crazy new temple loadout I got. Even If I botch this one up I’ll still get to run the Apex of it. First time seeing that happen. I really hope I get that vault a few times so I can upgrade it for the currency. I am wondering if that is in part why Chaos Orbs are already costing a considerable amount to buy a single Exalted Orb. This leagues economy has been a strange one, to say the least.

I got the necromancer up to level 68 and he is now running tier 1 and tier 2 maps. I spent maybe 60 Chaos Orbs on him so far. I really need to farm and get him a new chest as wearing a Tabula Rasa is not going get him very far. I did get him a 5-link Femurs Staff and that should be good enough for a long time for the Vaal Summon Skeleton setup I have running in it.

Since all of his damage is from his minions mostly the skeletons getting something beefy like a Kaom’s Heart that has zero sockets but +500 life and a bunch of armor would be ideal. They are running around 160 Chaos Orbs. I got a fair ways to go to earn that. Most of the remaining damage upgrades I can get for him and the minions come from jewels in passive sockets in the skill tree. I need a couple hundred Chaos Orbs worth of them for that. 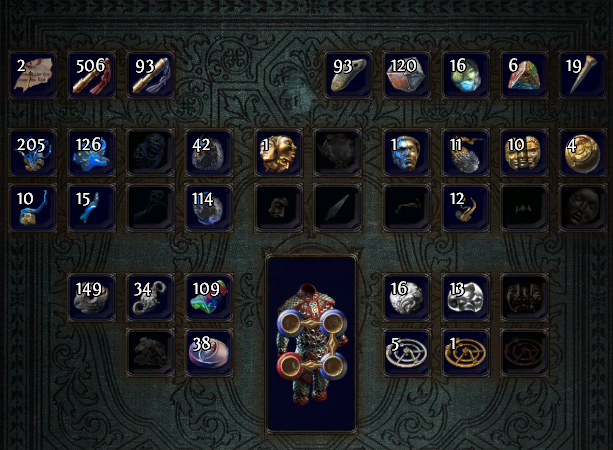 I took this at end of one of the day. I’ve been doing a decent job in trying to upgrade currencies. Sadly it’s not enough to keep up with the market. I’m only at one Exalted Orb and prices are skyrocketing for them. At least I have some protection from the inflation we are already seeing on prices. That when exchanged is around half what I need for the body armor I want to buy. It will be next big purchase I make unless I find a great deal elsewhere in the meantime.

Have an amazing week!