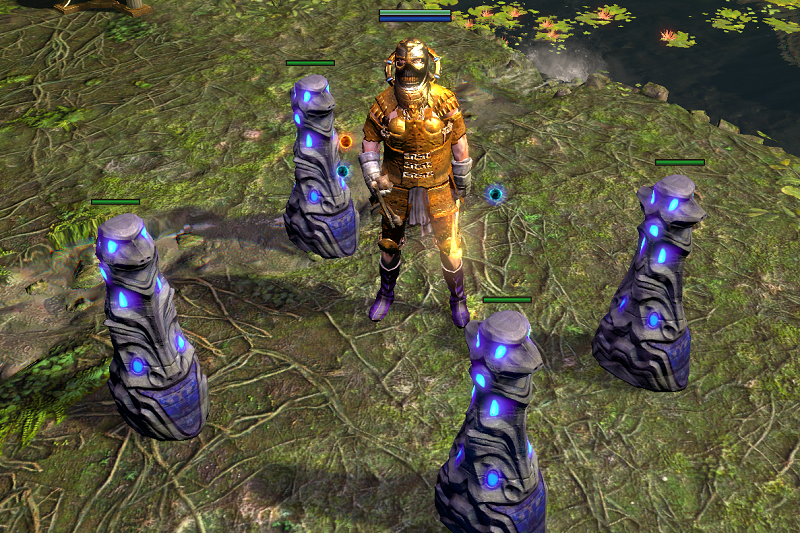 With Incursion league starting last Friday I feel decent progress has been made. I have been leveling up an ArcTotem Templar that I ascended into a Hierophant. I know what a strange name for an ascended class. He is now 84 and at a point where I can either start farming quite a lot of currency or make some alts and try new things.

I last left off with him just unlocking maps and I’ve run hundreds of them by now if not more. The Temple of Atzoate has had an interesting impact on my gameplay. While you can just pass up the NPC for it in each zone as there no hostility or anything like that. I find myself rather drawn to it. While the Incursion part rather fast I find myself dipping down into low-level maps in hopes of getting needed upgrades and unlocks in the temple without too much struggle and failure.

Picking Up What I Missed 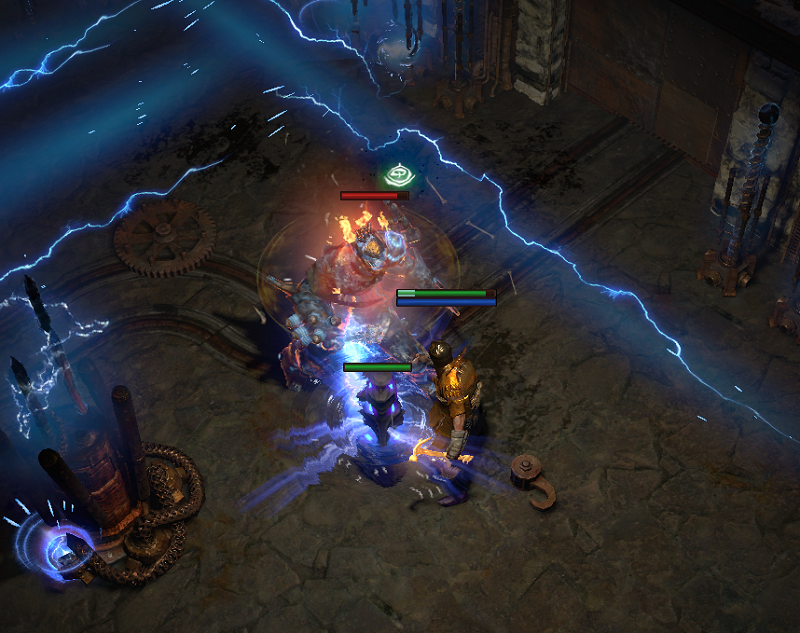 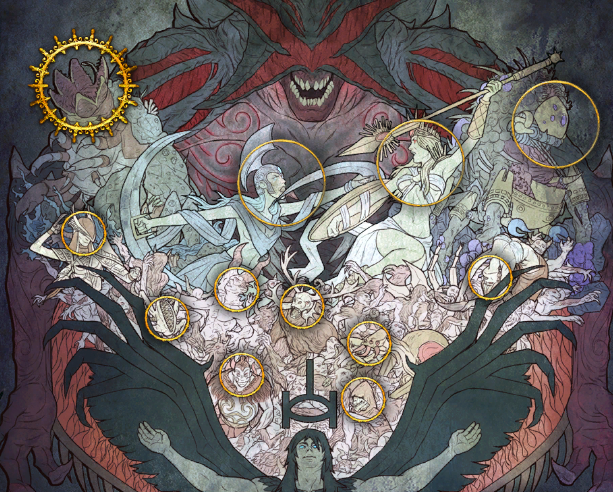 First order of business was going back and slaying any gods I had skipped over. I wanted to have full access to my pantheon and the start of each of the god powers. While I might not ever need 5% damage taken over time reduction or a chance to reduce bleeding compared to other god powers since you can only have one major and one minor one active at a time. It is always important to have that option if needed be. My Pantheon as you can see in that screenshot now has the first tier of everything unlocked.

Mapping will allow me to further unlock more abilities in each one of them. Such as from the god power called Soul of Lunaris. I also capture Midnight’s Howl I will have if I select that power the ability to evade chained back to back projectiles. While I have no need in my day to day playing in this game perhaps I start farming a map that has quite a few ranged bow type of monsters inside. 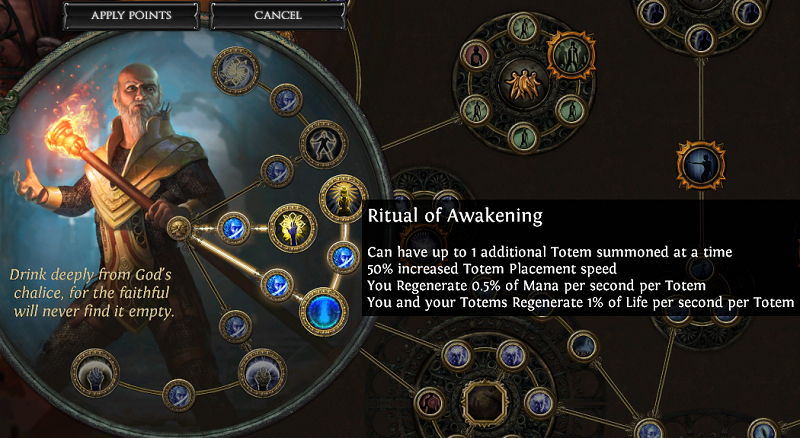 I also went back and got the remaining trails I was missing for both Cruel and Merciless Labyrinths and I’ve run them to gain more passive skill points for my ascended class. Being able to get Ritual of Awakening enables me to have an extra totem summoned. Pair that with a passive skill I picked up called Ancestral Bond. I gave the Merciless Labyrinth a few runs trying to get myself a five-link or better chest with no luck. I also was hoping to get a decent helm enchant but that did not happen either.

While there is a body armor called Soul Mantle that lets you have an extra one as well, but, it curses you and for now I’m not sure I want to deal with those negative side effects of getting that. As such I have a 5-link chest while I shop around and save up some currency. This leaves me with being able to have four summoned totems out at a time. Which so far has been rather powerful.
I have also in my map farming ran into a couple of needed trails for Ethernal Labyrinth. I have found Piercing Truth, Lingering Pain, and Stinging Doubt. There just remains another three I’m hoping to find at some point. I’ve had a few repeats as well. In fact, I have never found them all so this final labyrinth is content I’ve not done before. I’m hoping this time around I get to farm it a few times. 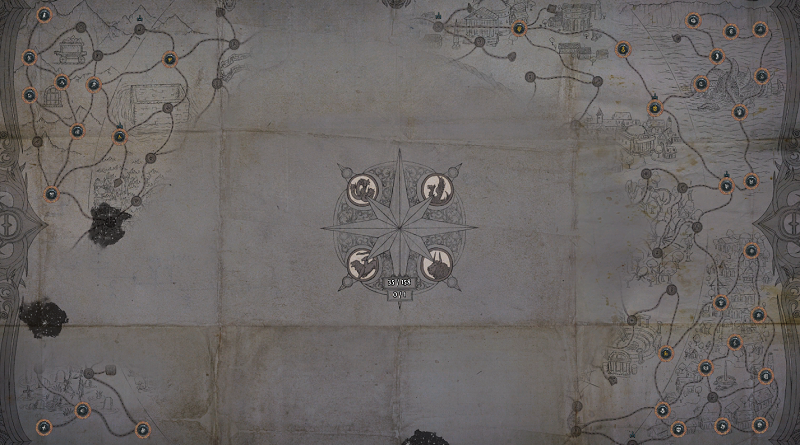 For only being a little more than a week in my atlas map is starting to fill in nicely. Due to temple runs, I’ve not pushed as hard as I was thinking I would. Running low-level ones trying to get something I need for a bigger reward in those has paid off somewhat. As such I’m finding a balance between unlocking new maps and running lower easier ones.

While the beach is tier I. I just loved it even more so if I have rooms I want an upgrade or unlock in the temple for the incursion. It is a fast clear for me and I just find it enjoyable running down the coastline without having to dodge in and out of rooms, giant boulders, or go exploring in every little spot on the map to get 99% of monsters killed.

The drawback I been having with this map is I won't go outside in real life and enjoy the sunshine and the beach! Thankfully it has been raining a lot so I could not do much outdoors even when this makes me have a lure towards it. This is also a very low-risk map for me now so the boss is easy to take out and I don’t think I’ve had a single death so far this league on this map.

While the only map in tier 1 that I don’t like out of the four called Dungeons as it is indoors. The remaining one's Graveyard and Lookout are not to bad to run. I do prefer Graveyard as my second choice. I have completed all of them for the atlas bonus to increased tier map chance on the drop.

The next tier up has six total maps in it. Some of them I hate and only ever run once to get the bonus or if I’m running out of maps yet. Otherwise, I take three of them and combine them into tier III maps. I’m a big fan of outdoor maps that have some shaping to them for easy flow of hunting and farming. Indoor maps with lots of corridors and dead ends or massive outdoor maps with lots of boulders in the way are not ideal for speed running in my opinion.

As such I do enjoy Arid Lake map as seen in the screenshot is has this disgusting lake in the middle of it. That also is a nice divider to go around as you farm so it makes things have a nice flow. I don’t tend to miss cluster of monsters to clear out as I have that lake as a guide along with the edges of the map. I just go around it counterclockwise.

With ten maps in this tier, you start to have a lot of options in what you can run. I even found myself still lacking finding a Burial Chambers or Cells map to complete this tier off my list of things to get done. This is also where many players tend to stick around and farm this tier.

While the first two maps that I enjoy where a nice enjoyable climate. The Iceberg is my favorite map to run in Tier III if you are not trying target a high very low drop rate but the high-value item that I’ll take more about in a moment. It’s a nice chilling change of pace as you can see from the screenshot. Each iceberg is not hard to navigate as long as you know where the bridges are to cross. Making this one a quick on to clear once you get used to it. It also has nothing I would consider annoying like terrain tripping you up and getting in the way as you use a skill like a shield charge.

Speaking of the map I’ve yet to get drop this league, Burial Chambers. It I a heaven for farmers and many people could spend weeks on that map. It’s not because of the zone layout as I’m not a fan of it. Oh no, it's because of what can drop. While many might focus on currency drops or even gear drops there something worth a lot more. Cards can be easy to overlook as most of them are rather worthless. Burial Chambers drops card called The Doctor. Oh, only eight of those and you have yourself a Headhunter! Currently, you could sell one of those cards if you got lucky for around 6.5 Exalted Orbs each. Headhunters are going for around 60 Exalts! Still, a dream of mine to get a Headhunter one day or just the card drop would be nice. The belt lets you gain for a short time mods from rare monsters you killed. Making it rather powerful and desired by many. 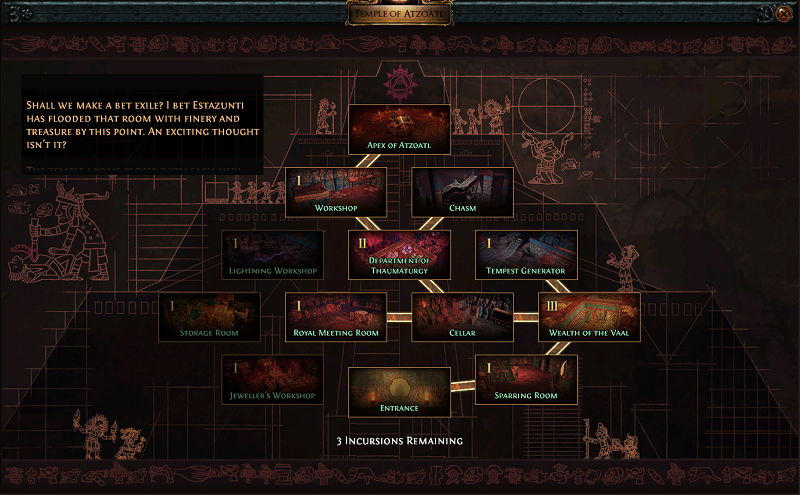 While I have run quite a few Temples so far in this Incursion league I’m going hold off my thoughts and to much talk about it for now. That is till I’ve had more runs into it and with some different classes and builds to better understand and see how things play out. It has been amazing so far and I’ll leave you with that thought.

I’m at a point now with my Templar being level 84 that I need to either invest in some expensive items to keep progressing or make an alt. I’ve been leaning towards playing a Necromancer like I tried out during the 3-day hardcore incursion race. I would love to see how it handle clearing maps and having some money spent on its gear.

Right now I have around 1.5 Exalted Orbs. Nothing to special. It’s enough to buy some alt gear for faster leveling so I’ve very tempted to go that route. Otherwise, I need to farm around 15-20 Exalted Orbs to pick up a 6-link chest, 2 Shimmeron Wands (unless I luck out on them dropping) and some other items for the Templar. Once I switch over to wands I’ll have a massive damage boost, but, I’ll lose out on using shield charge as my movement skill. The alternative skill used is flame dash is just not as good as a skill and I find it rather bulky to get around with.

We will see what the next days bring. Have an amazing weekend!