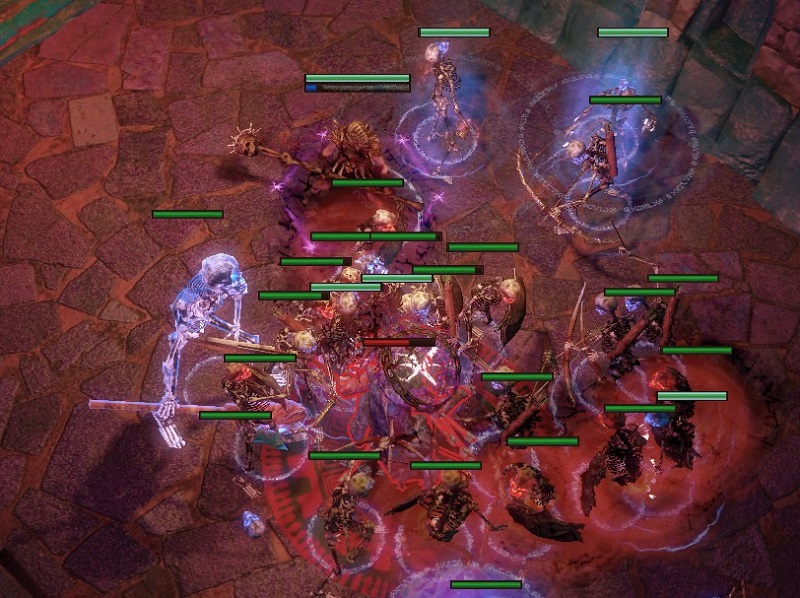 While I’ve not been going at breakneck speeds things have been progressing so I thought I would chime in an update before the weekend hits. I’m getting to a point now where I understand the necromancer gameplay and how to scale the damage. I also just feel very comfortable moving and clearing maps with it.

Ah, the necromancer quite an interesting playstyle in Path of Exile. It is one of those that do decent on its own as a league starter but if you can put some currency into things get amazing. Great thing so far is the most expansive thing I bought was only 140 Chaos Orbs. Granted I could sink a few exalts into getting a 6-linked and getting perfect rolled items would cost more than what I spent as well.

One of the harder things to think about is getting amazing damage output. I mean you can get gear for yourself that increase critical strike, higher damage on weapons, and so forth. As far as your minions well that an interesting one to think about. Since I myself don’t do damage it’s all form the minions quite a few things people are willing to spend on are quite worthless to me.

In my last update Leveling Up An Alt I explored one of the mechanics of buffing and beefing up your army of death mostly for my skeletons. You can use an Animated Guardian and they can wear gear so you put some stuff on have group armor or passes buffs along to the minions. You also can cast your own aurora and have it pass along to them as well with the right setup. 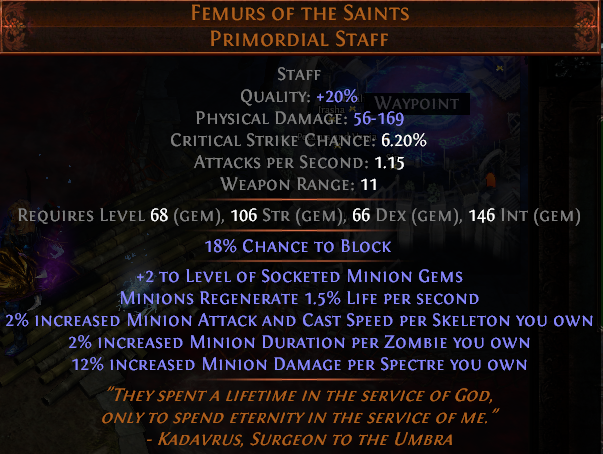 Going beyond that it can be a little hard. You can get yourself a helmet with minions deal increased damage-- which I have done. Femurs of the Saints a two-handed staff has a few buffs and increased levels as you can see in the screenshot. I run the main skill set up a 5-link Vaal Summon Skelton for now till I can get a 6-link. For now, that does not feel as important to sink that much currency into one item. There is even a pair of gloves called Grip of the Council that gives minions extra cold damage. Even then we are still lacking as we are missing something important here passive skills

When searching the skill tree for the term “minion” I count about 28 or so skills. While that might sound like an amazing amount it really is not. Without having specialized gear affecting my minions they are just not picking much in the skill tree at least at first looks.

Four skills are all about passing along the stats you have on your shield to the minions expect I have a two-handed staff so that is out of the question. Besides skeletons only last a few seconds before you need resummons them anyways. So having them just stay along longer with having an increase block chance is not really needed.

There are a couple of nodes that increase attack but no many. To make matters worse for those that increase your max skeleton count they also provide that bonus for zombies, specters, and other stuff along with those skills that you more than likely are not going to focus on. After all, I have a 5-linked main skill unless I spend a lot go get extremely special gear all of my non-skeleton minions will be a bit weak even with getting that added bonus already.

As you can see in the above screenshot of my passive skill tree I have searched for Jewel sockets in my passive tree. You can see a bunch of little whitish blue circle (not that giant one as well there one included in that as well). I’ve connected to a few of them and in fact, quite an amazing amount of power can come from these. Since you can buy ones from the market that give minions bonus damage, among other things. Leaving you just open to paying a higher price for something special or rolled perfectly. 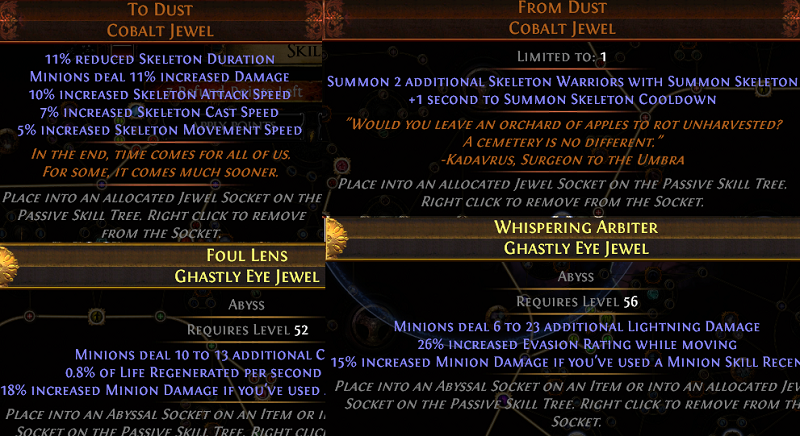 A decent To Dust jewel can run you over 30 Chaos orbs and it reduces the duration of skeletons but it gives something important for that downside and that is haste along with some damage. You also have a very powerful one called From Dust but you notice limitation of just one and this gives you some powerful ones called Skeleton Warriors. You can also just have your run of the mill cheaper yellow once that you pick to fill the sockets till you find something more.

If I really wanted to spend I could get rare gems with blind on hit or taunt for minions. Since they are abyss jewels you can get a belt with a socket on it (which I’ll get one day but I need a lot of resistance hand life so they are expansive). You can also get a helm with sockets but you can already get up to 40% minion damage from a helm so there not point there.

This left me thinking how amazing the passive skill system in this game really is. While I’ve used and had a need for jewels in the past. I never felt quite like it has such an improved impact on a build I was playing to this degree. Other night for the first time I finally started buying and filling my extra slots with minion damage ones. I originally was just going for To Dust so I was holding off on buying any but prices have not gone down too much.

Update On My Progress 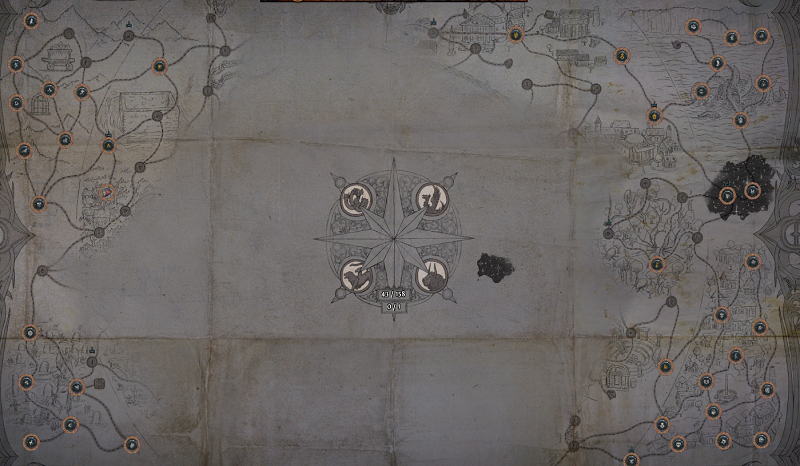 I’ve started to put enough spending into the Necromancers gear now to feel like I’m nearing some time to push the maps a fair bit. The hardest part will be keeping a good map pool but I’ve built up a few lower ones so I have something to fall back on. I have been clearing the couple of tier VII I fined like they are nothing. So it is time to move on after this update to much harder stuff!

I did spend 140 Chaos Orbs other night on a Kaon’s Heart body armor. It has a base of +500 life with my current passive skills that was well over 1k life by wearing it. Bumping me up to 5,700 life along with some other upgrades I bought. The downside of that chest is no sockets but I have that two-handed staff. I also spent 120 or so Chaos Orbs on jewels and some item upgrades. I could still spend a few hundred on getting gear with higher life and all resistance. 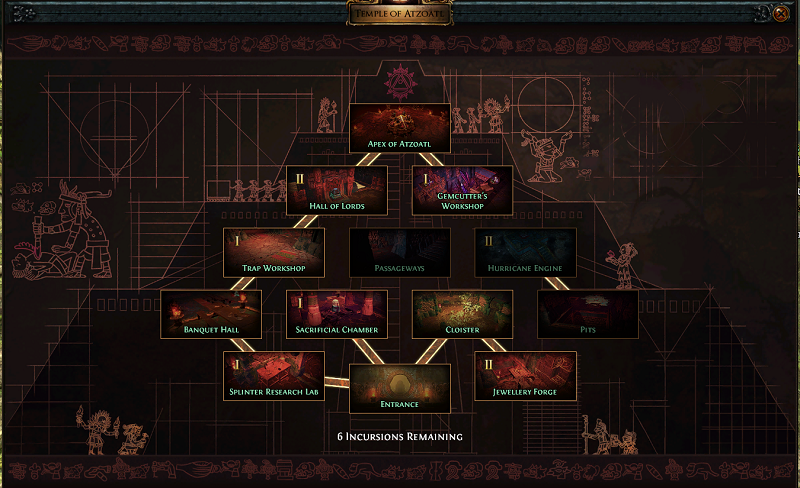 I’ve run a few dozen Temple of Atzoatl by now and I’m getting really decent at it. I’ve not been taking notes like I should have been. There are so many different rooms in it. It can be hard to know what ones you really want to go for. I have been focusing on getting and upgrading: Vault, Jewelry, Map drops, and anything that lets me corrupt items or exchange for a different random unique. I’m trying to think how I want to create content for it. It’s just don’t have enough full information myself to want to make a full guide on it. I’ll think of something.

I’ve not had any amazing luck on items of high-value dropping. The most expensive thing I’ve sold was for 15 Chaos Orbs. Most of my income this league has been doing Chaos Vender recipe of turning in a full set of yellows at the correct item level.

I also ran my Merciless Labyrinth and no clue why I waited so long to do it. I had so much damage and defense I could have done it in my sleep. I’m also just one trail away (I need to find it randomly) from unlocking Eternal Labyrinth a goal I had for this league.

The game economy for this league has not been too bad. Other than Alchemy’s feeling a little overpriced and Exalts trading for up to 114 Chaos Orbs going into the weekend. Somewhat feeling more like we are close to league end and not just a couple of weeks in. Temple of Atzoatl and the number of raw currency people are able to generate with it has some interesting implications of inflation being felt on the Chaos Orbs.

I have an Exalted Orb but with how fast it’s been jumping in price I’m glad I secured one in the first week and I’ve been holding off on breaking it into Chaos Orbs. As such, I felt it was just better to farm as I go and keep it.

I’m still really loving this Incursion league I already want them to make it part of the core game. It is a bit much and more than their normal add to core kind of content but it’s amazing. It feels like something thought out enough to be just a part of the game and it really is not intrusive to the player if they want to skip over it.

The Necromancer has been amazing so far. I’ve not felt like it’s been a struggle after I got that new body armor and some jewels for minions. I’m hoping over a week to get up to tier X maps and see how it handles in them.

It’s been great I can't wait to play some more. Have an amazing weekend!