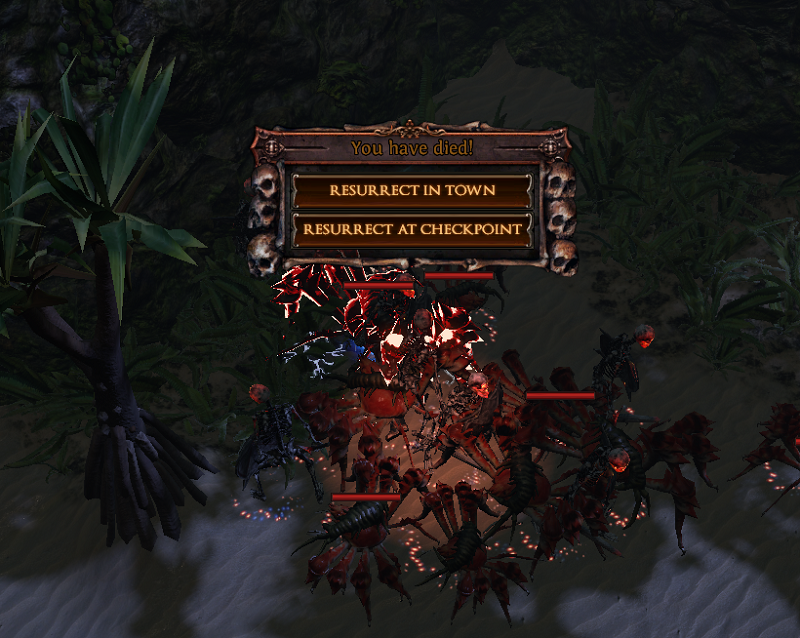 We are nearing week left for this in-game event and about 12 days until Incursion starts. I also just need a few days break from the game so I do not get burned out going into the next league. One of the fun things about only playing in leagues is you are always starting over fresh every couple of months. The downside you are starting over every couple of months! It is a double edge sword while it keeps things interesting and fresh you often don’t have enough time to experience everything you wanted to. 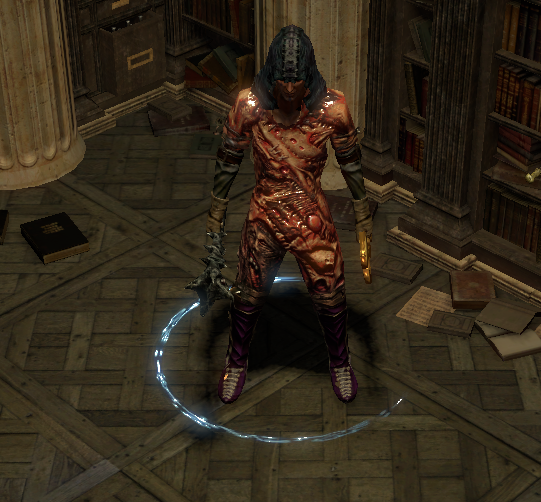 This also means along with flashback ending soon so is Bestiary and in that league, I wanted to level up a couple of toons and try out different classes. This however never happened due to how amazing the Flashback Event has been. I knew right away when that event was announced that I was just not going get around to those goals in Bestiary. So I shifted my focus towards May Flashback Event.

As such in May Flashback event I wanted to get a character to level 85. Since my highest character ever in this game is, in fact, my bestiary toon at level 89. I know I was not going reach the level 95 threshold to get enter into that armor cosmetic drawing. So I decided internally with myself on some other goals I wanted to achieve. 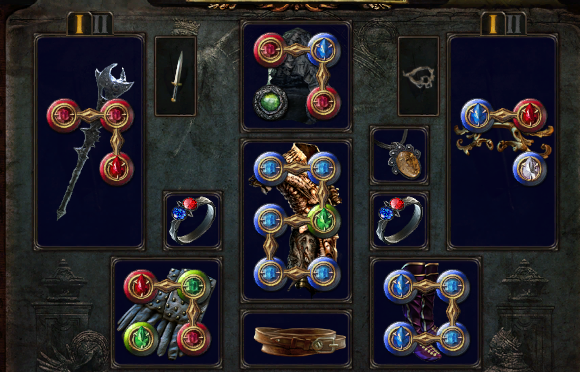 I did, however, get him some decent gear which was another goal I had in mind for my league starting character. A 6-link Carcass Jack Varnished Coat that is linked with blade vortex, increased critical strikes, physical to lighting, spell echo, concentrated effect, and controlled destruction. In addition to that I picked him up a decent Void Scepter and I talk about those in my last update Days 10-14

My final goal for him was to try and get a decent level 21 Blade Vortex gem. While I could go farm some currency and buy one I’m going leave this goal as not finished. I least got that main skill up to level 20 where then you need to corrupt it trying to get a decent 21 gem. It’s not a cheap process and requires leveling up a bunch of gems in the second set of weapons making them 20% quality and corrupting them to see if the RNG gods are on your side. Most will take a gem to level 20 before they vendor it with one Gem Cutter’s Prism to get it to 20% quality and then relevel up that gem to 20 before doing this. I simply don’t have the time if I want to get other things done.

The build itself was rather a cheap one as the goal is to build up currency so you can start another more expensive toon. All in all, I spent less than 6 Exalt Orbs on him which is a very decent deal for what he did for me. I then built up some currency to get into something else that I know would become rather expensive. In part, I just wanted to test how it goes and how effective that another toon is. It is a little late in the league to use it to gain further advantages. While I am far from sourcing a few key components of this next toons gear I’ve started the leveling process just to see where I could get it before needing to break out my higher level toon and farm more currency if needed.

These, however, are very time consuming and I just don’t have the time anymore if I also want a break from the game and get some other needed stuff done beforehand. As such my basic break down of all the leagues that are in May Flashback Event, and A Look Into The Games Currencies will have to do. That last one was rather time-consuming. The other guide I’m in the middle of I think is going take me over 10 hours and I’ve decided to hold off for now. I’ve also not taken much of a look into Incursion itself as I’m waiting for more information to come and that can be time-consuming as well. For now, while not 100% of what I wanted to do will have to do for now. Next league I’ll have to carve out some time to finish and work on other things I had in mind. 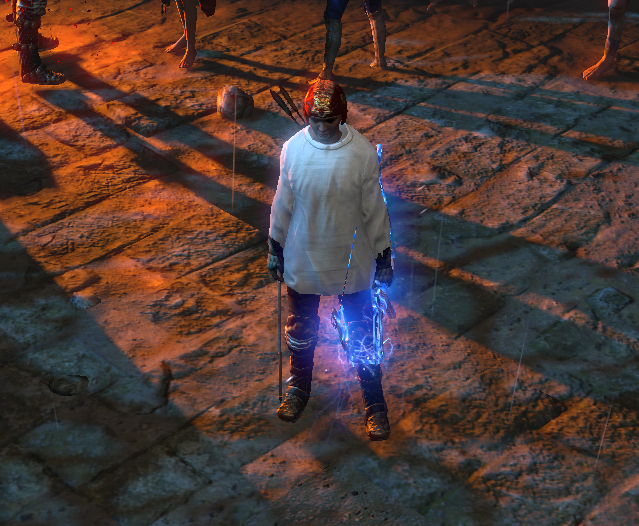 I don’t ever recall playing a bow class and if I have it was never really a high-level one. On top of that for the event, I’ve switched up my approach to earning currency. Most times I never have a plan I just hope for some good drops and try and get my gear from selling that or using it as gear for myself. That works for a little while but then everything except the stuff you want becomes rather worthless.

As such I wanted to take things up to next level. While I have been using the chaos receipt which I never did in the past (vendor rare 60-74+ set of gear) I wanted to focus even more on specializing. This involves creating a magic find the character. While it’s a little late in the event to make one and benefit from it. I might luck out and get some very expensive items cheaper than normal as people are just trying cash out. This will also give me a character for standard league once it transfers over for farming just in case I ever wanted to have one. As I almost never play standard anymore it’s not the main focus but a side benefit.

Making a ranger focused around the Windripper Imperial Bow with other gear focused on magic find(quantity, and rarity drop rate increased) is not a cheap endeavor. Just form how much these items can influence and increase currency earning potential the demand and price get driven up. On top of that, they tend to sacrifice a lot on the gear to get very high levels of quantity and rarity. Which means having to make up for it on the skill tree in terms of resistance and other things. Making them not easy to level either. Even more so if it's your first time as it can get frustrating not having the ideal items to make it as smooth as possible. 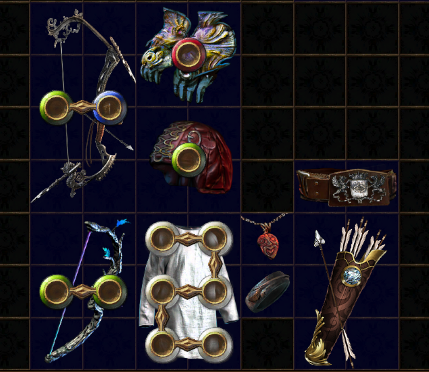 With time running low I decided to invest a decent little amount in some leveling gear for this ranger. Many of the items either have no level requirement or very low. Along with other things for him to upgrade into as I level him.

The 6-linked Tabula Rasa robe was 11 Chaos Orbs when I picked it up. This allowed me to run Split Arrow with Onslaught with Added Cold Damage and whatever else support gem I could get my hands on to start off with as soon as I reached the first Lioneye’s Watch and could across my Stash to get the items. This is a rather standard item for leveling up alts with.

I also bought him a few different bows totaling in around 35 Chaos Orbs in cost. Everything from a starting bow called a SilverBranch up till the bow he will use before Windripper called The Tempest. Which was not cheap for just having a leveling item. Windripper itself does not run cheap just for a base version with very few sockets could exceed over 70 Chaos. While higher end once could go 5-10 Exalted Orbs I’m thinking to judge by what I’ve seen for sale.

I also got him a bunch of other items for speed and resistance. Goldrim, for instance, has a nice 32% to all elemental resistance and even gives a bonus to the rarity of items found. On top of that an Iron ring and the remaining of his slots and some upgrades along the way, I easily spent over 50 Choas Orbs on him which is why this is not something you would start with. This is also rather cheap as his more end game gear will cost a quite a few Exalted Orbs on the low end each unless I get cleaver with a few pieces. Other things like a Headhunter Leather Belt running at 54 Exalted Orbs or higher right now I don’t plan to go for. while I would love to one of those belts one day it’s a little too late as time is running out. Still, a Path Of Exile end game goal for me to have it during a league. 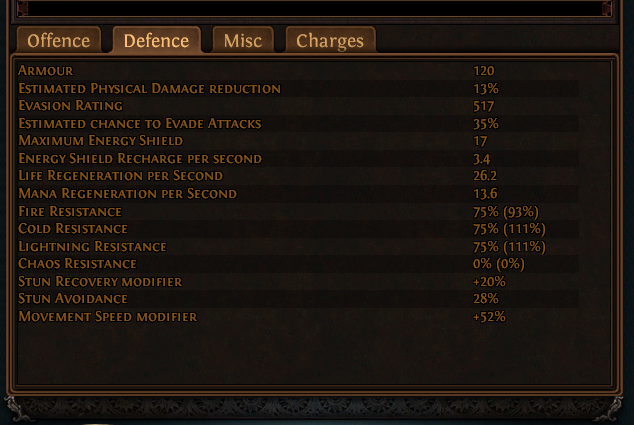 While he's not into maps just yet I’ve done some leveling with him and at the start, it was at least very easy to level with. After all, he has some nice unique items, capped resistance, and a 6-link for lots of damage dealing with his main skill till its switch out for Tornado Shot later on.

In fact, I was doing Acts in around an hour for a while. Not something I’ve ever done. I was keeping this character 5 levels under level as I was speeding past things trying to go as fast as possible. Making it into Act 5 at 4 hours and 10 minutes mark-- holy smokes! This trend, however, did not continue. As after a while, his very powerful gear started to not be so much. I also only had so much to spend. Least for this update things went swimmingly well!

Leading Up To Incursion League

Time is most definitely running low and I really only have so many more hours before I need to switch to other things. I’m hoping to get some cheap end of league deals as people are just looking to offload stuff they don’t want fast so they can rush more characters into higher levels. Not quite sure if I’ll get the Ranger as far as I want. There are some game mechanics I want to test out with him at the very least.

On top of that, I want to do a Hardcore standard dry run for a few hours. See how that goes before going into our race here on steemit on June first. I might even do a couple of starter runs and see where I can improve the most for the first couple of hours.

On Tuesday another game is coming out that I will be enjoying as a way to take a break from Path of Exile. I also need do my standard housekeeping in Path of Exile of cleaning up inventory, freeing up character slots. In addition, get caught up on some stuff here on steemit that I’m falling behind on. Finally, a bunch of in real life to get out of the way so I can enjoy incursion for a few hours a night as well. Should still have one or more blogs coming out before Incursion Leauge starts on Path of Exile.

For anyone still going hard on May Flashback Event, I hope you re still having fun and will reach your goals! Even more so for those trying reach level 95. I won’t be reaching that level this time around myself. Maybe next time something like this roll around I’ll try for it. Have a wonderful week and may you find amazing items!