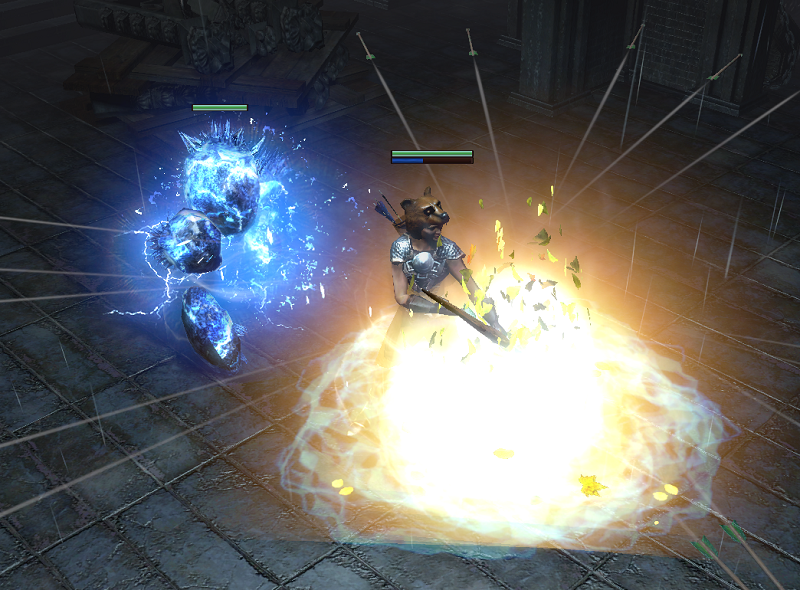 Finally, I got this Ranger into running maps. I knew going into this that he would be more or less be a glass cannon and that has certainly been the case. Last time I left you off with things still going rather smoothly such as getting him to Act 5 in around 4 hours as I discussed the last things I wanted to get out of May Flashback event.

Since then the troubles and the costs of wanting to run a Windripper build have started to pile on. I expected this as they are not something cheap. It’s been a couple days since the last update as it took another 10 hours to get him from Act 5 until he was running tier 1 maps if you can even call it that. Part of it I know is because I’ve never played a Ranger. Another part is I just did not have enough currency to buy him all the fancy things to make this smooth transition. I also was rather greedy in wanting quite a bit of quantity gear on him.

While he can clear maps in his current state thankfully I play on softcore where he getting killed quite often is just a normal acceptable thing. The ranger is now level 75 and while he can do up to tier 5 maps I skip the end boss in each of them as he's not set up for single damage dealing at this time. Mostly as expected he would be a Tier 2-3 clearer without too much of an issue. I’ve just been running whatever maps I have on hand. I know not the best plan but it’s how I enjoy mapping instead of trying force Elder influence. Which from what I hear is getting changed in the next update anyway. 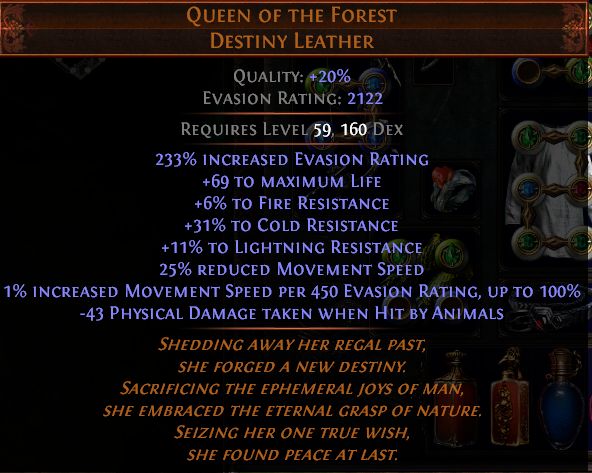 Besides his leveling gear and me shelling out the costs for a 6-linked Queen of the Forest armor piece with the currency I already had. He's been farming his own currency and even getting an upgrade as drops which is very exciting. His luck seems to have started when I picked up that armor for only 4.5 Exalted Orbs! That was at least at the time 1.5 Exalted Orbs cheaper than anything else on the market.

I’ve been running tornado shot in it. Which is not my normal style of gameplay. I'm used to more of an up and close or a screen clear at my casters feet. This skill gives me a bit of a range as it shoots arrows and they bounce around a bit from where ever I have my mouse pointed at. So there has been a bit of a learning curve for me in that. I also don’t have everything that would be ideal to increase his dps even further than it already is. That stuff can get rather costly as a few different bow builds want them. 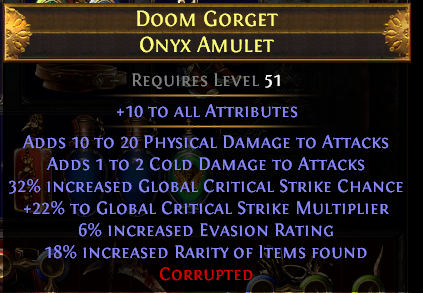 In fact, he has had some good luck and has allowed me to try out a few different pieces. He got an Eye of Chayula drop the other day and while that was worthless I noticed people were corrupting them. So I thought why not I think this guy is lucky. While his gear does not influence the RNG on that he has some kind of luck on his side as I got that Doom Gorget out of it! While it’s not something amazing crazy kind of item. They look to be priced around 25 Chaos Orbs so I thought why not anything better is costly. While I do like the damage on it and it could still be an option something else happened.

I knew what is when my eyes glazed over looking at the screen. It could not be. Why, I’ve never had one of those to drop before. Every Path of Exile player should know what it looks like even if they never had one it is, after all, a decent item. I looked at the gold amulet in my inventory for a while not daring to identify it. Surely I must be mistaken that looks like a Bisco’s Collar there must be some other item with the same exact look that is also unique. Stat rolls did not look too bad either on the item. I’m thinking it could fetch around 2.5 to 3 Exalted Orbs on a good day. One of the more expensive drops I have ever gotten in the game. 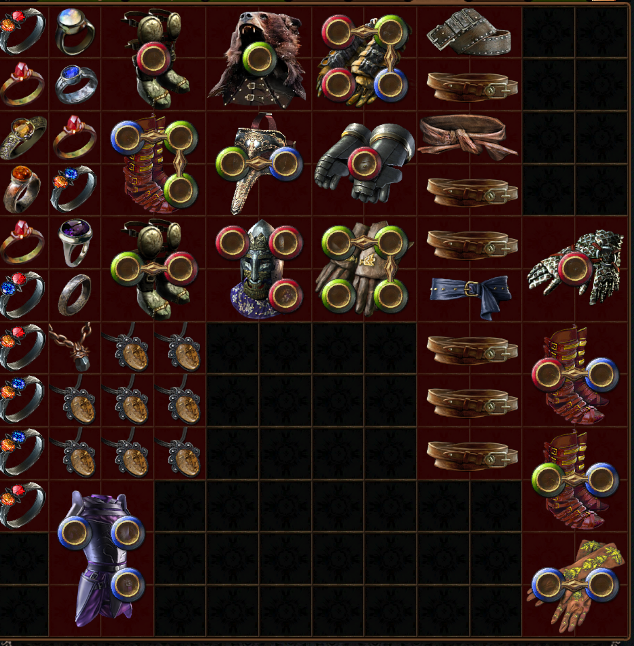 On top of that, I had a few other notable items that I got. A couple of cards that I sold for varying amounts nothing too crazy as I’m not focused on running chambers or anything like that. A Tabula Rasa (my second this event!) I also had a pack of mobs rain down 9 amulets all at once. I turned that into an easy 18 Chaos Orbs when I picked up enough of the other items to do the Chaos recipe (rare item set level 60-74). In fact, my large collection of rings I had going for a while is now gone and I’m even struggling to get enough rings from time to time to keep up with amulets. Finally, just a lot more currency dropping such as Chaos Orbs, Chisels, and Sextants. I was hoping I would maybe see another Exacted Orb drop during this event but I feel very lucky in just getting the one I did the other week. 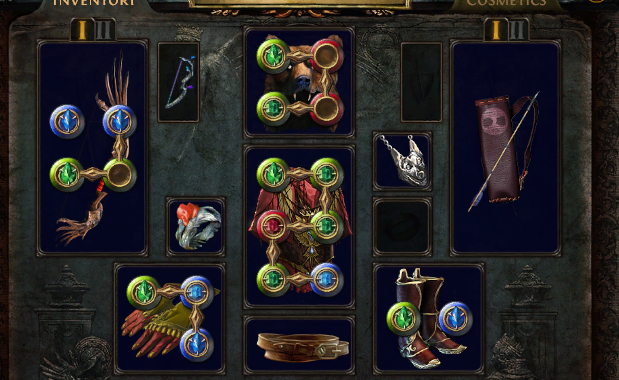 This can be a rather tricky spot for something like this. With how much item quantity and rarity you could run it also means trying to find ways to get up to the resistance cap and enough of a stat like intelligence on dexterity heavy build. 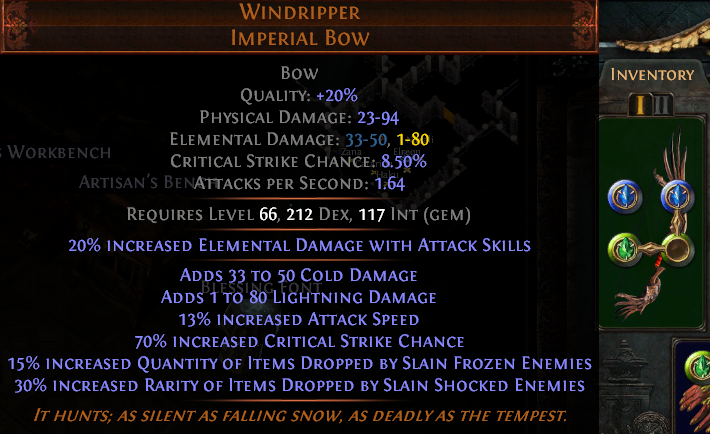 I did have the ranger self-farm enough currency to get his own Windripper. It was a rather cheap one 90 Chaos Orbs and while I could have gotten cheaper. They would have been corrupted and I wanted some options as I was unsure what gem skill up if any I wanted to run on this. I could still try and make this a 5-link and put something like Barrage gem setup in it for single target damage. If I would have gotten a corrupted one I would not have been able to change the gem colors, or try and get more sockets and links on the item.

In addition to the Windripper, he mostly has cheaper stuff unless he found it like the Bisco’s Collar. For now, he has a two slot ring called Thief’s Torments that is providing a much needed 30% to all elemental resistance along with 15% for the quantity of item founds. A Sadima’s Touch gloves with 16% Quantity, and GoldWyrm boots with 18% quantity. While I could try and get something more high end like Ventro’s Gamble rings. Getting two that will make up for the resistance I’m getting out of Thief’s Torments will cost more than I want to think about at this time. The rest of the gear is just focused on filling resistance gaps and trying to make up some damage or evasion. 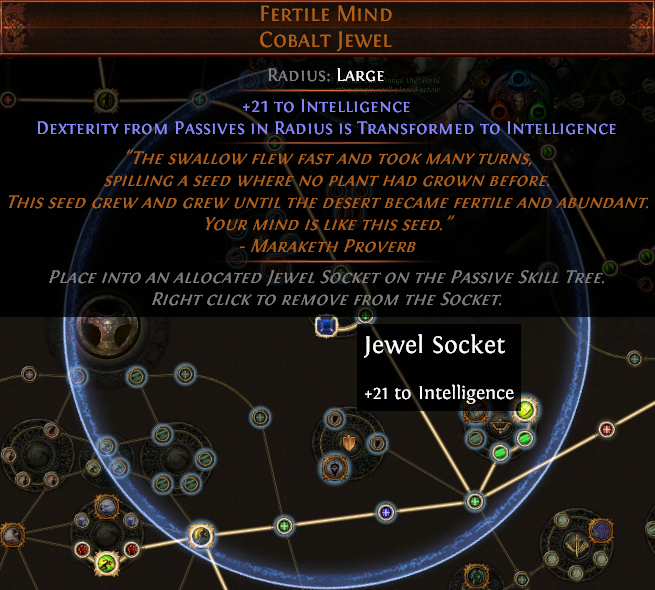 One rather silly way I’ve gotten around my lack of intelligence on gear is in the passive skill tree. While I’m still debating if I want to just reduce the level or level up new intelligence-based gems. For now, I’ve stopped leveling them up. I’ve also picked up that Fertile Mind jewel to deal with things. It really is not ideal at all but I had such a shortfall I decided I would just deal with it for now. I’m hoping in a couple of levels I can pick up other passive skill nodes and switch some socket jewels in the passive try to replace this. I would really love all that dexterity back. For now, it will just sit converted into intelligence.

Not quite sure how much more time I’ll be spending on this guy as we are nearing the end of the event with 4 days left or so. I also just need the break as I’ve been enjoying doing other things in my free time as well. Ideally, if I luck out with some good drops I might aim to try and get a Dying Sun flask and a decent arrow quiver with a mod that adds an added arrow. That quiver is also where I’m getting a lot of resistance from currently so that will be a hard switch. I might end up dropping one of the lower quantity items such as the gloves or boots in trying to make that easier.

I have around 1.6 Exalted Orb’s worth of currency right now. Getting that up to around 5 Exalted Orbs should enable me to get any good deals that show up.