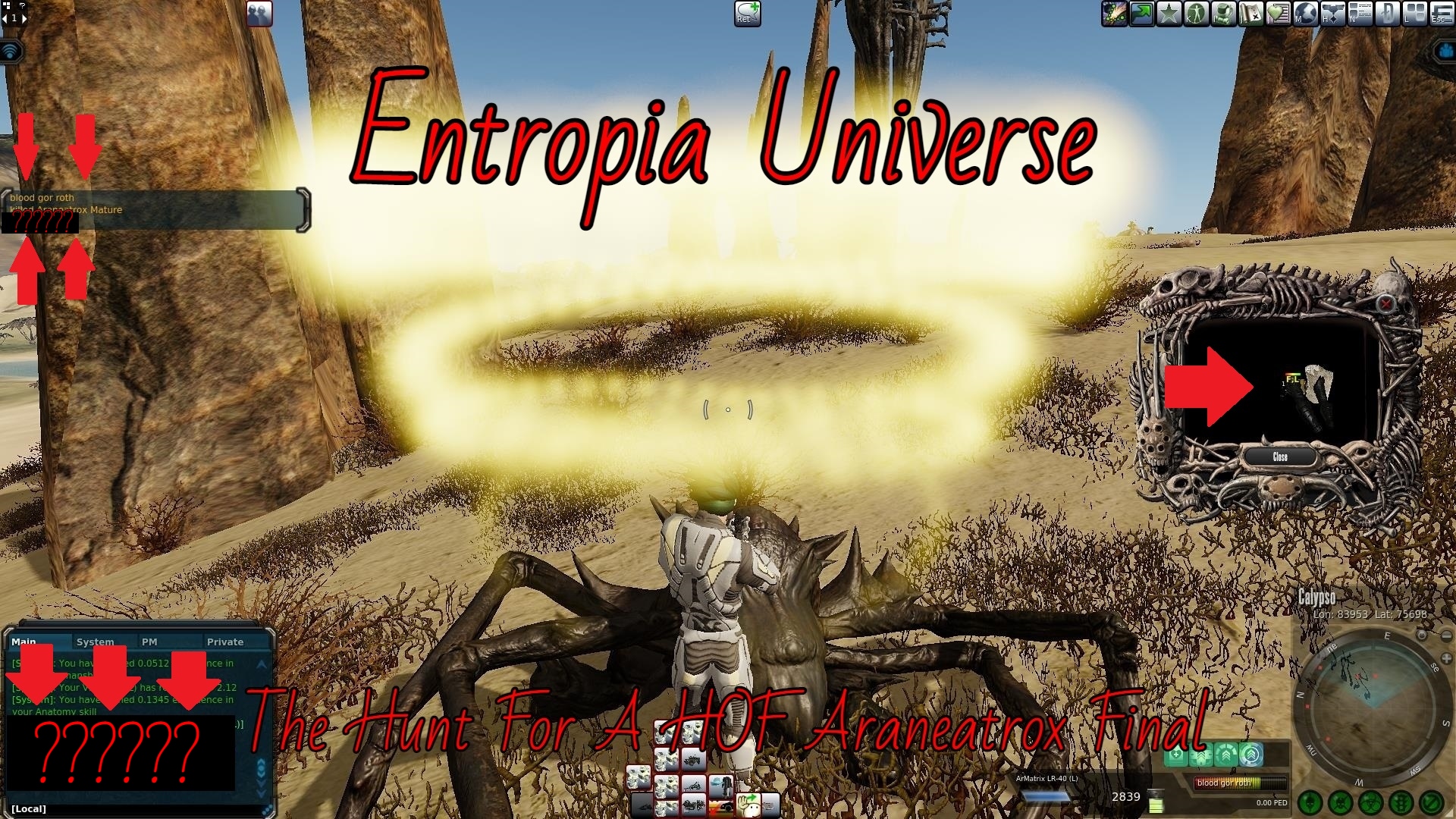 Araneatrox is now my second highest single global creature I’ve hunted in Entropia Universe. I was both right and wrong at the same time. This ended up being quite the conclusion for my hunt for a HOF off these.

A bit of a recap. A few days ago I noticed a trend that Araneatrox had not had an Uber in quite some time. Ubers are 1k+ PED loots. As such, I titled this series HOF (Hall Of Fame) since those that follow along in my content know that term a bit better than the other.

Araneatrox which is quite a high-level creature is also known for dropping 6k-8k PED or bigger ubers when they do happen. So my hopes were quite high that if I would get something there was a chance it was going to be decently huge.

Getting something that big for me would have funded my ability to buy some much-needed ring upgrades. Along with much other stuff. Along with padding my budget for some upcoming events some of which I know about and others I’m just speculating will occur based on what data I’ve been able to gather.

As a result of still no one getting an uber. I went out again with the mindset of hunting Araneatrox for a decent amount. At this point, I’m down a little bit on Araneatrox. It’s however not as bad as I’ve been with some other creatures this year. So anything decent and I would be in profit.

That hunt ended up going decently well. I did not get a global but I was getting way above average on loot. To the point even after decay costs and everything else, I came out slightly ahead. Closing my losses slightly just further fueled my desire to go out and hunt even more of these things. 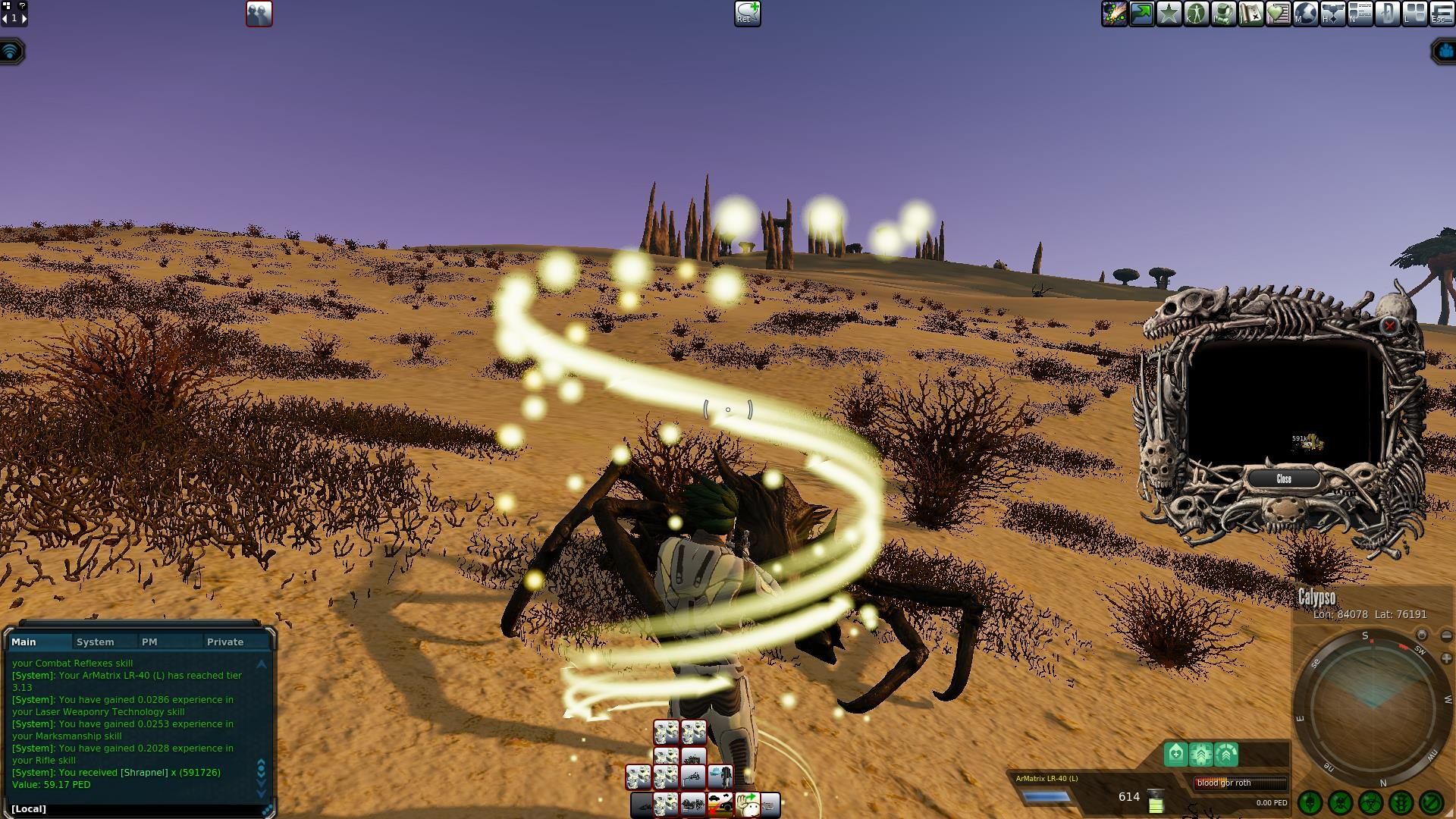 The next run after that I was about halfway through when I ended up getting a small 59 PED global. While that kind of global on quite a few other creatures is decent. For something that large you kind of expect it to be a fair bit bigger.

Further, into that hunt, I ended up getting a 49 PED loot as well. Anything short of 50 PED is not global. I got to say they were looting quite nicely.

I was hoping by now to have gotten some other loot than mostly shrapnel. There are quite a few things Araneatrox can drop that have a markup. Some of those items also have some decent TT (trade terminal value) that if you looted it full TT (it can drop with a far lower value) it would be an instance global.

Loot was at least decent enough without getting stuff like that so I kept going at it.

Sometimes this spot would be filled with other players. Many other times it would just be me and this one other person who was grinding these creatures like crazy.

I had considered checking out some other possible locations for Araneatrox. This place was however doing so well for me that I was willing to put up with there being more people in this small area and not getting the exact hunting situations I would have preferred for the weapon I’m using.

I decided to go on one further extended run before I would be calling this chase off and moved on to other things. I had stuff I wanted to do on other planets and other creatures I wanted to hunt anyways. Early on in that hunt, I ended up getting a 94 PED global. After that loot was dead. Those gains started to get eaten quite heavily but not as bad as I thought they were. This hunt was however going to be my last hurrah so I went for it regardless.

The place was mostly emptied. I think I noticed two other hunters in the area. One person camping in their usual spot and another person like me ends up moving around a lot. During this hunt, I ended up finishing off rank 5 of the Araneatrox codex netting me a nice chunk of Alertness. Every five levels you get a small PED value of a list of skills to choose from. They however tend to be more sought after so the tradeoff in value is more than worth it.

Araneatrox has quite some interesting options to choose from. Including ones, you get even less of a PED amount. If some of those other choices like zoology had a bigger impact on animal looter I might have considered them.

For now, I felt Alertness was still the best option. On top of gains for animal looters, I would also get gains for mutant looter as well. On top of that doge and evader professions would benefit as well. I ended up making it around to the hilly side of the area. I was kind of jumping all over the place trying to get a feel if one spot was going to be better than another. It was all just kind of lacking.

I ended up coming up to another player's spot. I decided instead of just flying over him and continuing on my route that I was going to wait on some respawns and clear backward. This was just as good as any spot at this point. Usually, I try and stay away from Araneatrox mature when I can. This one ended up getting a bit of a jump on me and I ended up doing a lot more healing than usual. For whatever reason, I took this random screenshot since I don’t usually kill a lot of these.

This spot also started to get quite a few respawns in it. I was not expecting to be so boxed in as I was. A part of me was not even sure I’d be able to kill this one in time before possibly getting adds on me. The maturity alone was going to be hard enough with what healing I could do. It then happened. I looted the Araneatrox Mature I had just killed for 1488 PED. While the bulk of that was in shrapnel. It also dropped a full TT Shadow Arm Guards (F, L). 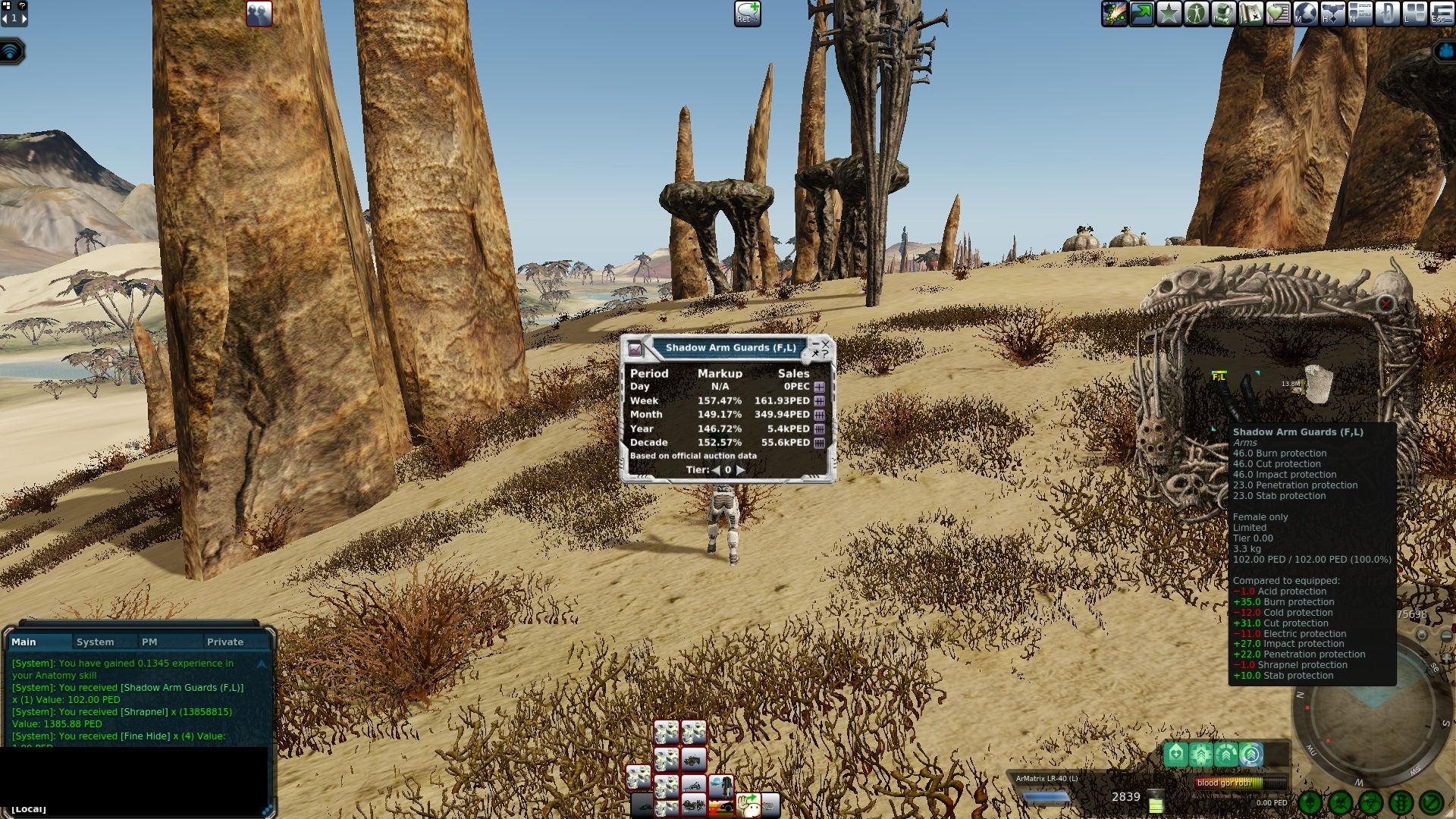 It seems the curse of getting female armor as a drop continues. At least this is the only full TT one on the auction house at this time and I put it up for around 157% markup. When it sells I’ll get an extra 60ish PED from the markup. The listing fees per week will be around 3 PED.

Sometimes these things can take a while to sell. I might also have to adjust the price a bit lower. You can see it’s selling for a usually higher amount than the yearly. Demand for these pieces is more than likely going to drop a bit. I however decided what the heck I might as well some people will pay more to get a full TT one so they don’t have to try and find one for a while since these (L) pieces can’t be repaired.

While I was thrilled to not only have looted an item with a bit of markup on it but getting now my 2nd highest global off a creature in-game. I was a little disappointed. I for sure thought with how long these have gone that this would have been at least 3 to 4 times bigger.

As such I decided to continue hunting in the little spot I was in. This felt usually low and sometimes you get a cluster of globals all in a small area equaling out to the bigger expected amount.

I was not the only person who must have thought this was quite low. The sky filled with many people flying overhead of me within 5 minutes. Most seemed to have landed just on the edge of my radar and were killing these things fast.

After clearing out what was left in the area I did not get anything else massive. I did get some above-average loots. After a short while, it seemed everyone who was hunting these stopped for a short time.

I did get a few private messages from people I’ve never played with congratulating me. I was somewhat expecting to log in a few hours later and see someone else get a much bigger kill off these. That however ended up not being the case. 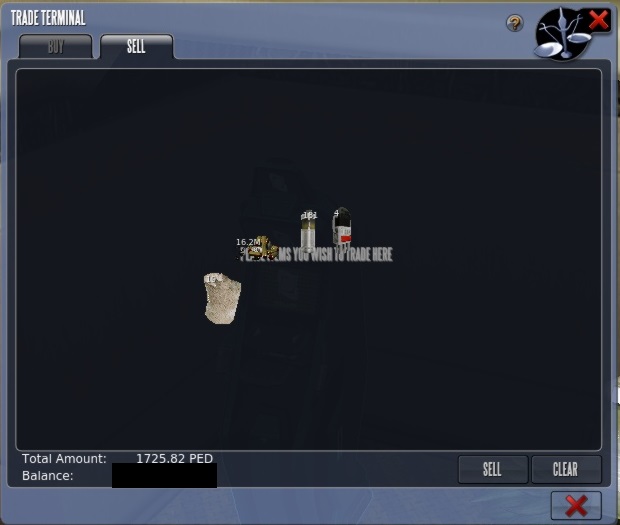 It was quite early in the morning and I thought I grabbed everything from the hunt and dropped it into the trading terminal to get the final amount I looted off that hunt. I forget to include the Arms I looted! So looking back the hunt went even better than I thought it did. Just not as good as I was hoping.