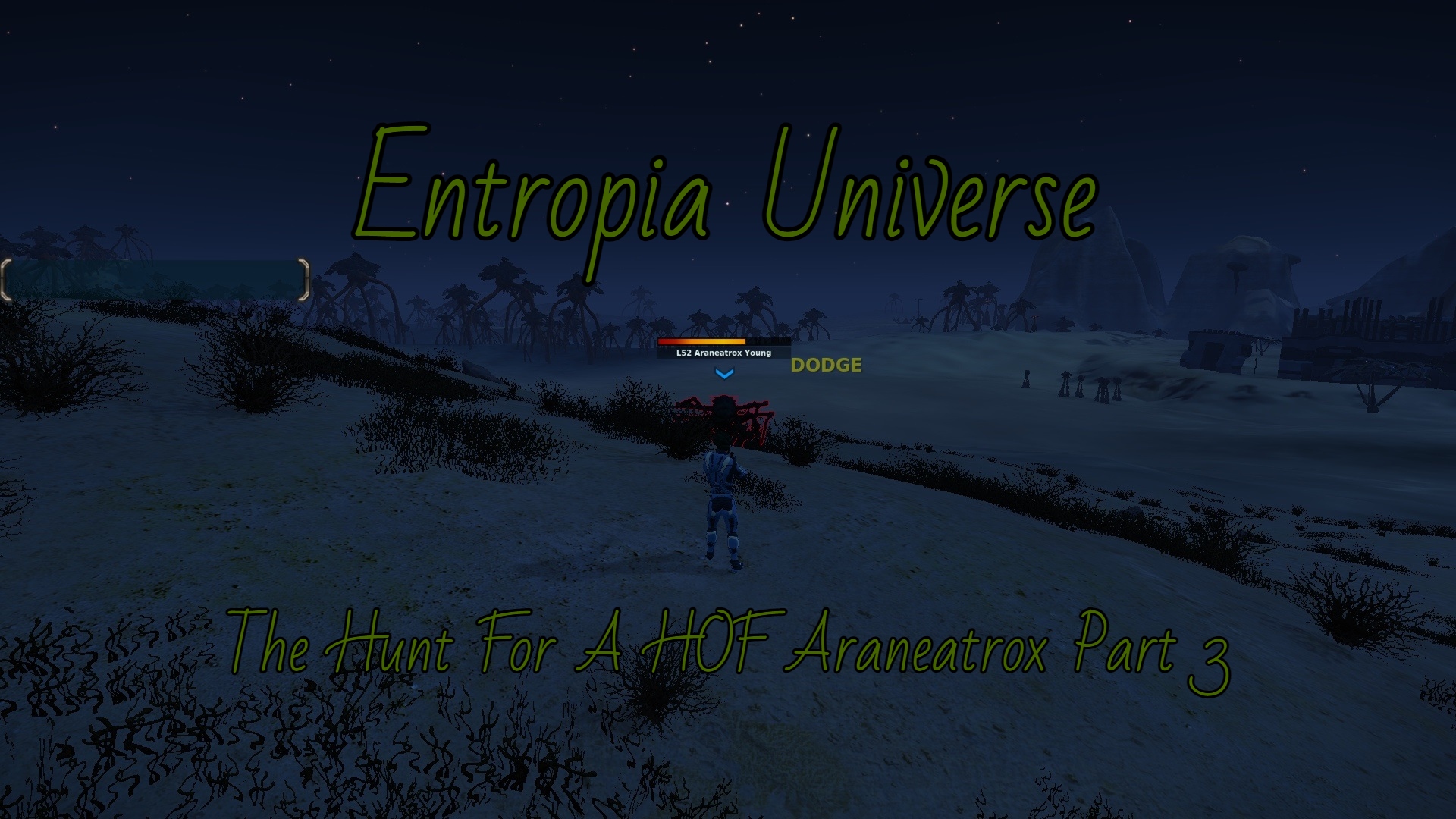 The next several hunts I ended up having on Araneatrox ended up going decently well. They for sure did not cover some of my earlier losses. They at least kept me around and coming back for more.

During one of my runs, things were not going that great. I was at least looting a couple of 10-20 PED looters. I’m rather shocked at this point with how many Araneatrox I’ve killed that amount seems to be rather rare for how much these end up costing to kill. That thankfully gets offset if you can get a global off an Araneatrox. I had one entire run where I only took this screenshot. While it was just 137 PED of shrapnel that was more than enough to cover the losses for that run and even a little bit of hunts before this.

This also made me rather glad I ended up switching to this other location. It is not a player-owned area so no extra taxes. The biggest downside however is the spawn of Araneatrox is not that massive.

When I have the place to myself I sometimes do an entire loop around the place and try to clear every Araneatrox I can. This was however not one of those days. A couple of players here and it becomes full.

That also puts me at a bit of a disadvantage and I need to be careful. The most ideal condition for me is being able to shoot at an Araneatrox at max range and have some space to move around in. With a bunch of people, you could be getting a respawn on you at any moment.

This did mean I was having to heal a lot more than I would have liked to. I also did get killed a couple of times as a result of this as well. Thankfully the revival point here is not that far away.

The biggest downside to getting killed here is there is a chance someone else could be on the radar of the creature you were shooting. So they will begin to region health before you get back. Araneatrox has quite a decent amount of health regen which is what makes them such a high level and even a bit challenging if you lack a proper gun. 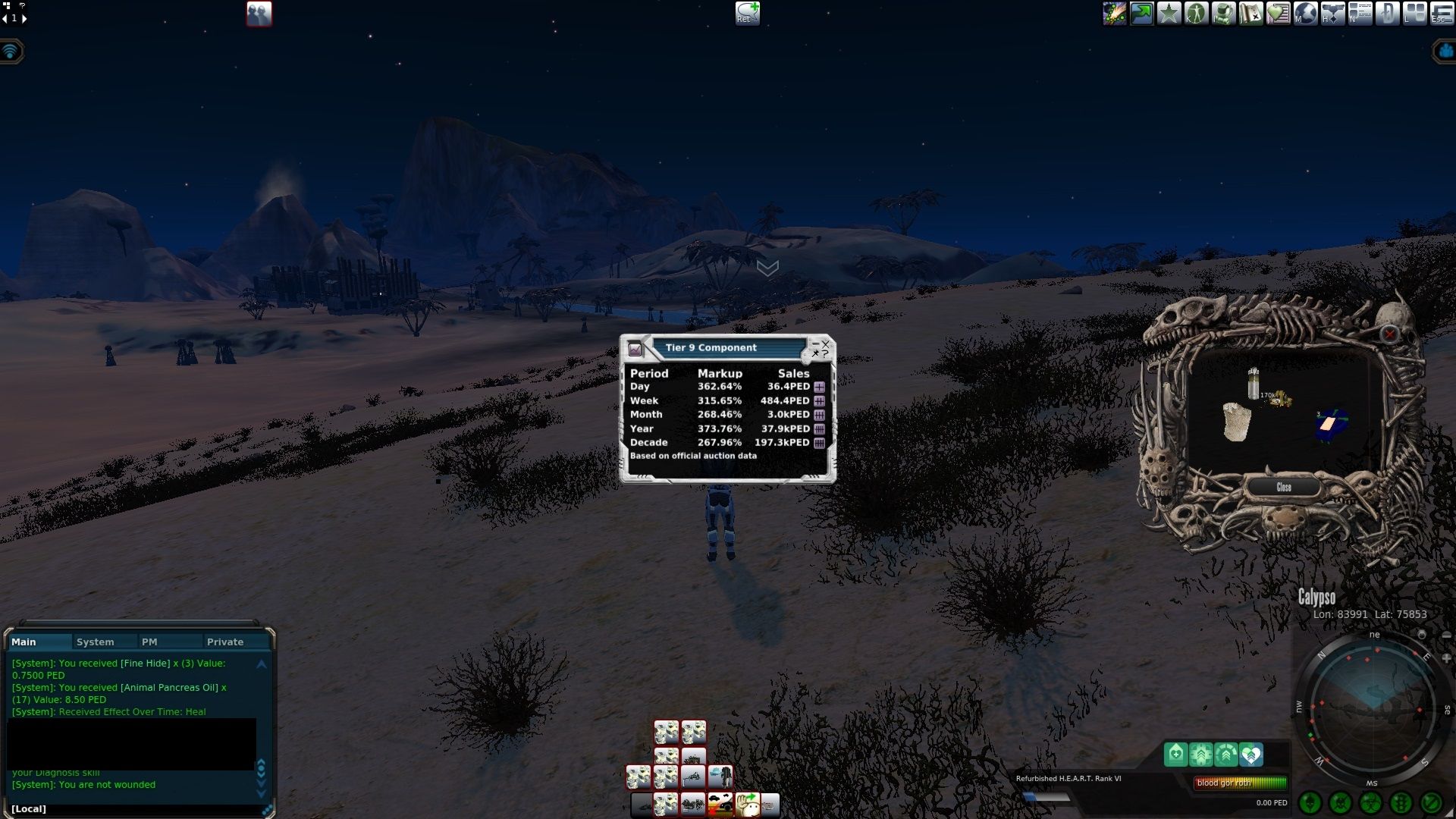 One of the benefits of going out and getting firsthand experience of a creature is seeing just how common or uncommon certain drops are. Up till this point, I had yet to loot a single tier 9 component.

I was hoping once I looted one I would start to see a further drop. Loot in Entropia Universe tends to be a thing that comes in waves. This was however the only component I ended up looting on that run. They have some decent markup but I have other creatures I would rather hunt if I was going for component drops albeit they are not this high of a tier. 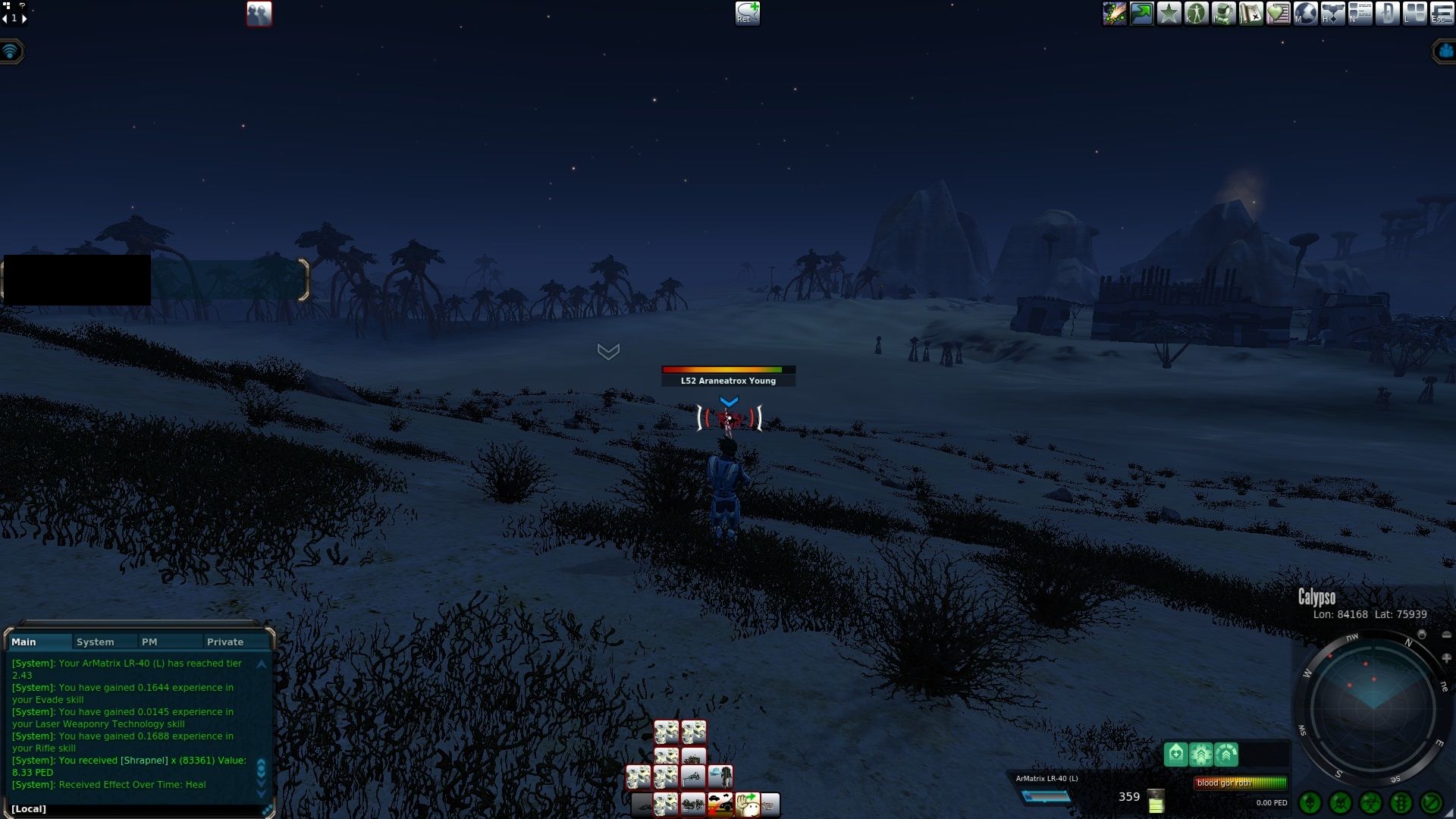 Another thing you get to learn about firsthand in exploring a place is the terrain. Since I am someone looking for the max range of my weapons this sandy desert area provides some issues on that end. There are a fair amount of hills, dips, and even objects blocking me from having a great shot.

Many times I had to decide before a pull how I was going to pull it. Was there a better way I could position myself on a hill? Would I be able to get a decent distance walking backward or would my line of sight get obstructed?

Sometimes I had to just take an extra beating, decay on my armor, and do a lot more healing than I would have liked. Many areas are just not that flat at all.

While there are some decently flat areas as well. You either don’t get a lot of the spawn here in such a way you can quickly start getting adds on you from respawns if you want to have constant kills instead of waiting for respawn.

Some players with far higher skills than mine tend to sit in a rather flat area. They need to kill quickly enough or they will have a lot of Araneatrox attacking them. Such an area looks great for very long grinding sessions I can only assume over months from what I can tell if you got the gear for it. 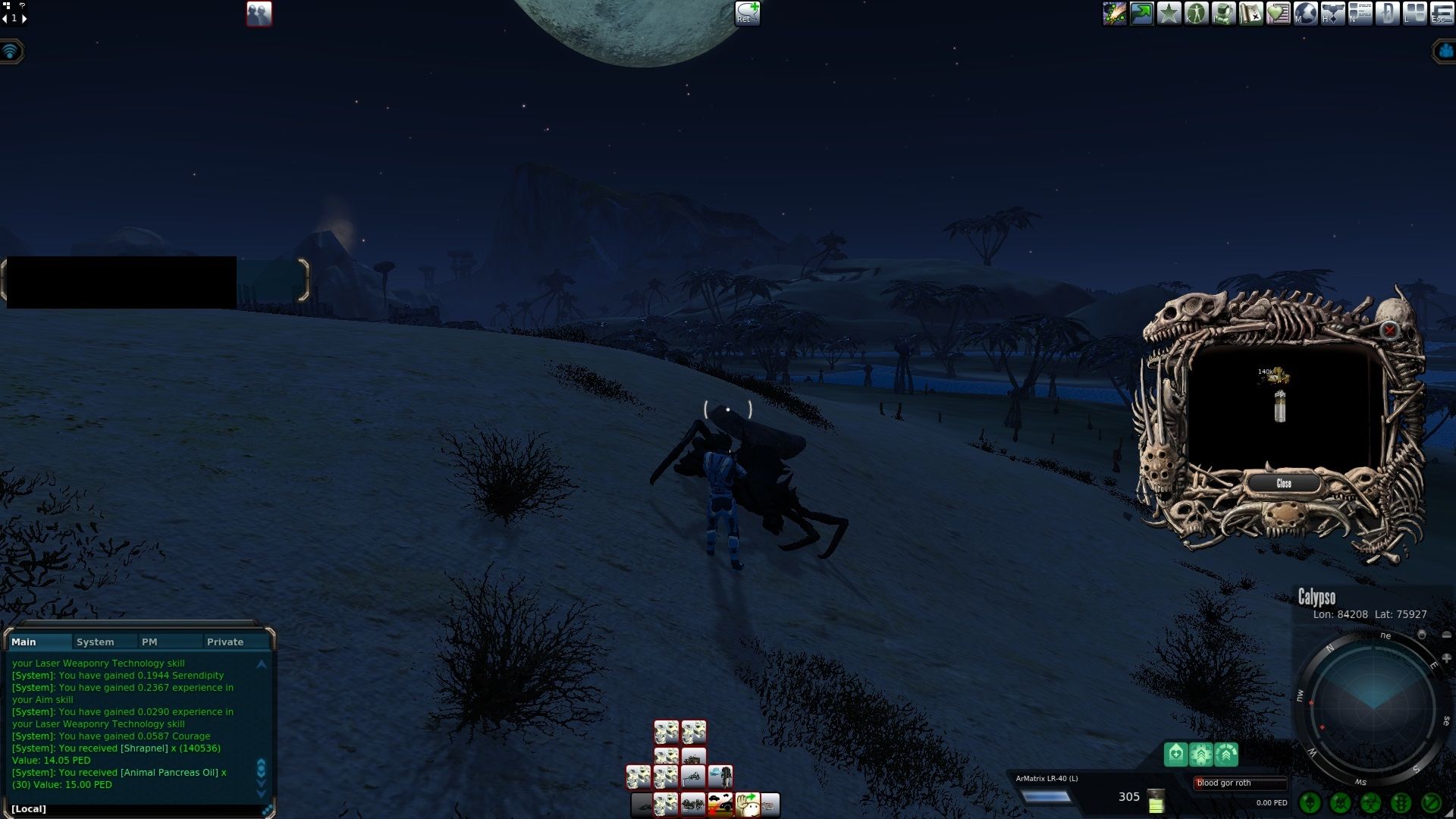 I don’t so I tend to keep my distance from certain spots. I usually find myself more up on the side of the hills than the tree side of this area. There have been certain areas where I’ve noticed the loot has been rather lackluster and for whatever reason when I move else were in the area loot becomes decent again.

I even managed to have a run here where I broke even without needing to get global. The markup I got off that run and just some decent looting was more than enough. That is just something I could never say about Takula Plateau and I had a few further hunts over there getting the same not-so-great results.

Some of these runs would go decently enough that I would go back and double up on the amount of ammo I was planning to use during a single trip. Sometimes it works out and other times not so much. If they seem like they are looting I want to keep shooting! 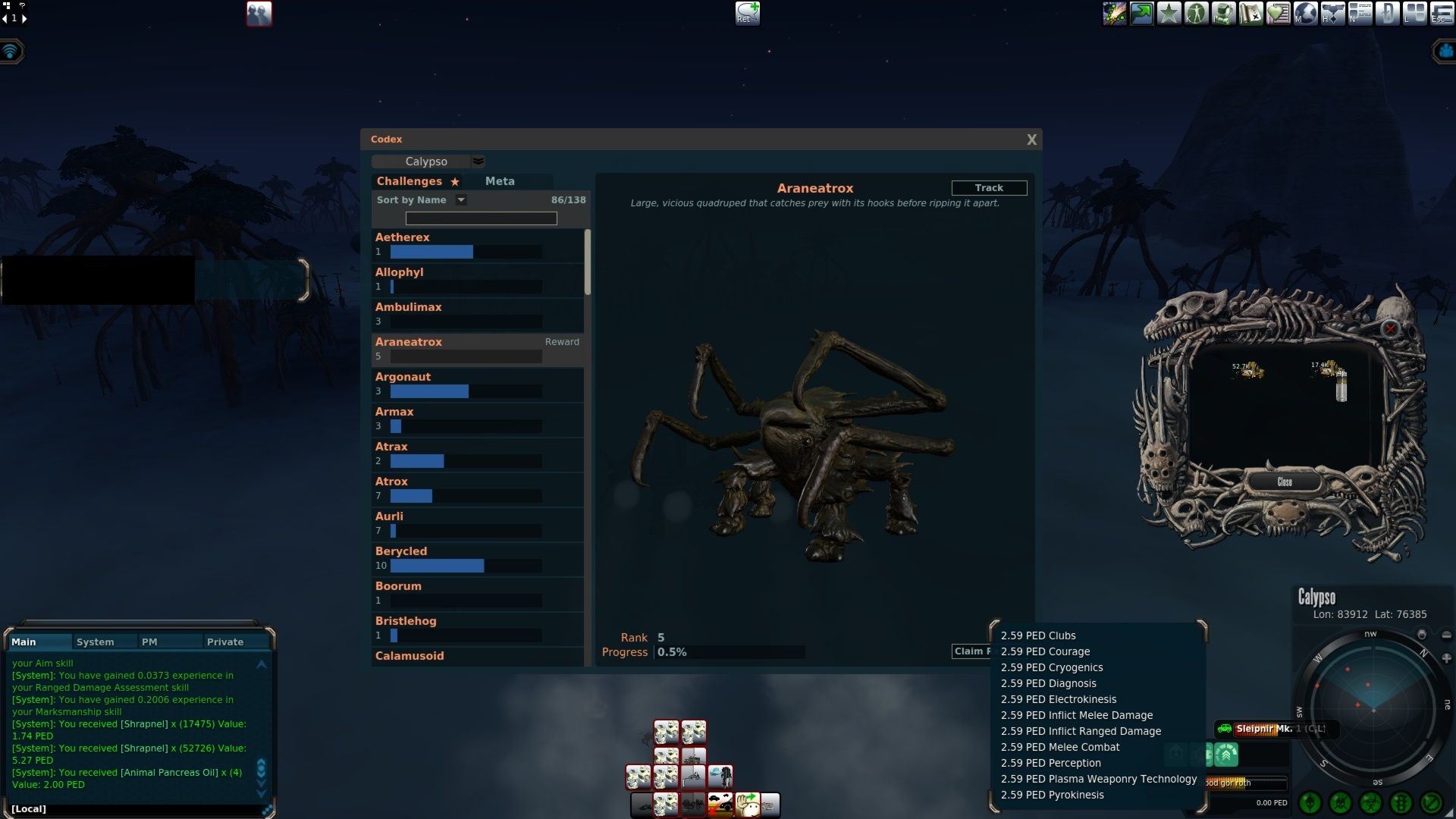 One thing that has been going on as well I’m I’ve been racking up a few codex levels. I was rather expecting with how much ammo I’ve gone through that the rewards were not better. Granted at level 4 of the Araneatrox codex it was 2.59 PED of skill. I ended up selecting perception. While I could have hoped for better from these groups of runs. It was more than enough to at least keep me going for a bit longer on Araneatrox. They could have certainly been a lot worse. I’m also not as far down as I thought I would be at this point with how few globals I’ve gotten on them.