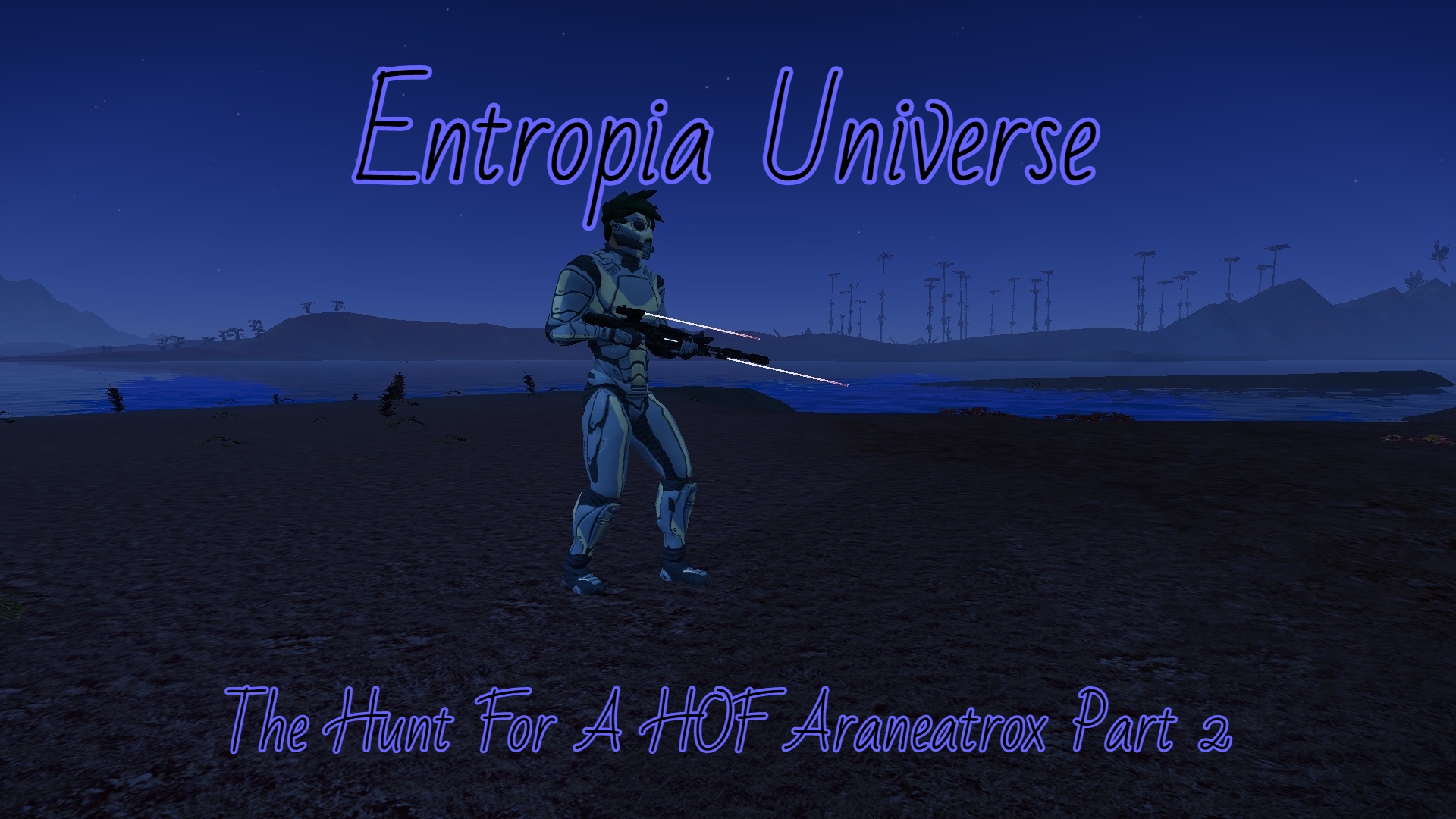 A couple of days passed and I was out at it again hunting Araneatrox. To my shock, no one had looted anything decent so I loaded some ammo and went out. I would be returning to the last spot I hunted at before. 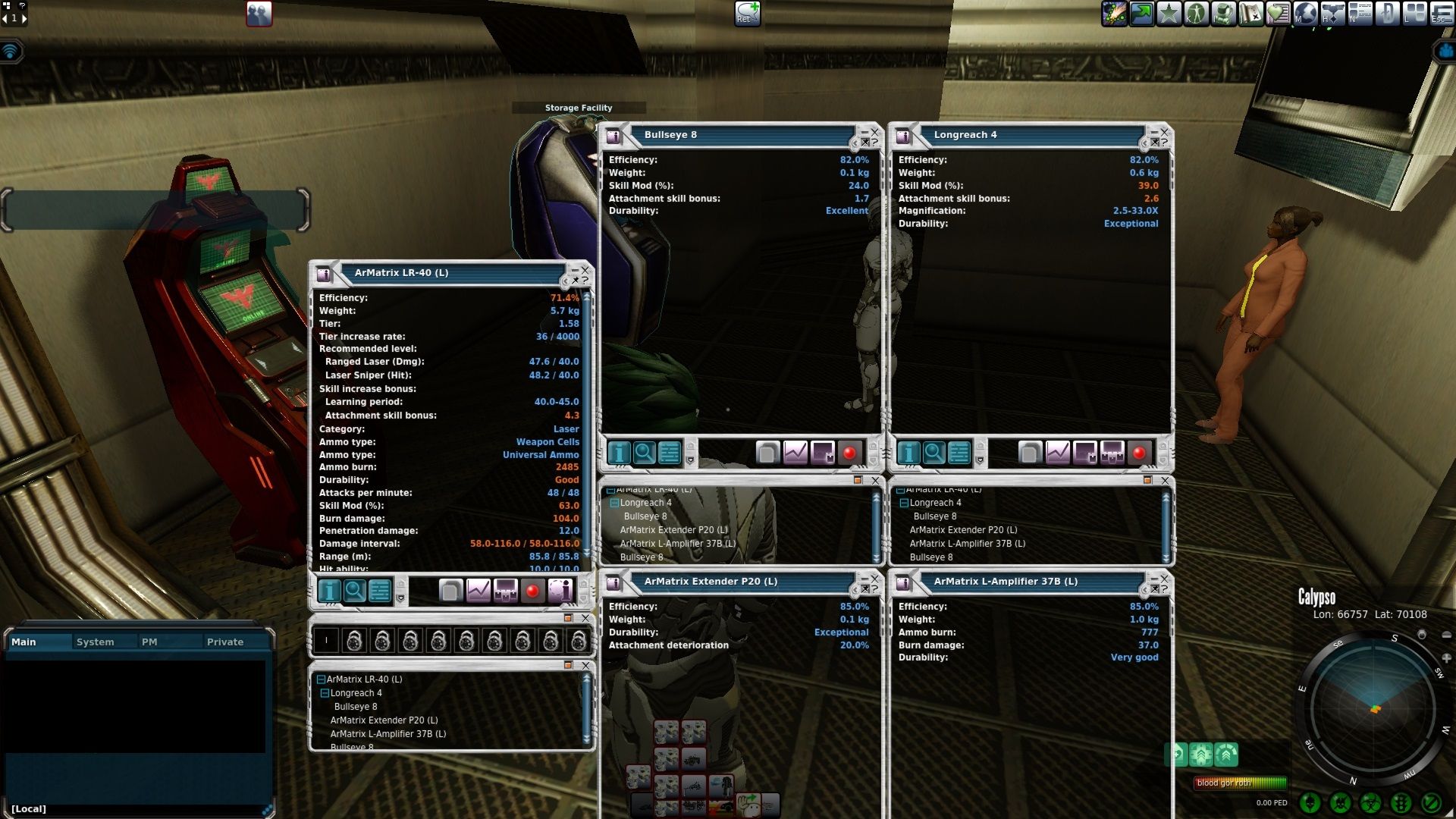 You might have noticed from the cover image that I’ve made some adjustments to my loaded. I should have many years ago invested in two Bullseye 8 laser sights and one Longreach 4 scope. For whatever I just never did.

While I don’t need the zoomed-in effect from a scope. I also don’t need the increased hit ability of these new items I acquired. As I am already using a gun I have maxed out my hit chance. Some other benefits should cover the cost of these over the long run.

These three items have quite a high efficiency on them. As a result, they add a slight efficiency to my overall gun. They can also be repaired which my gun and gun amp cannot be. So while they are adding a slight cost to my setup I’m not paying extra markup outside of what I already have as a one-time thing for sights and scope.

They also give me a slight skill gain modifier. If I had bought this years ago that part alone would have made these worthwhile. It’s just one of those things you think you will get around to and don’t. I have quite a long list of things I’d like to get and this just ended up being on the cheaper side of things since I could buy them off the auction house from other players. 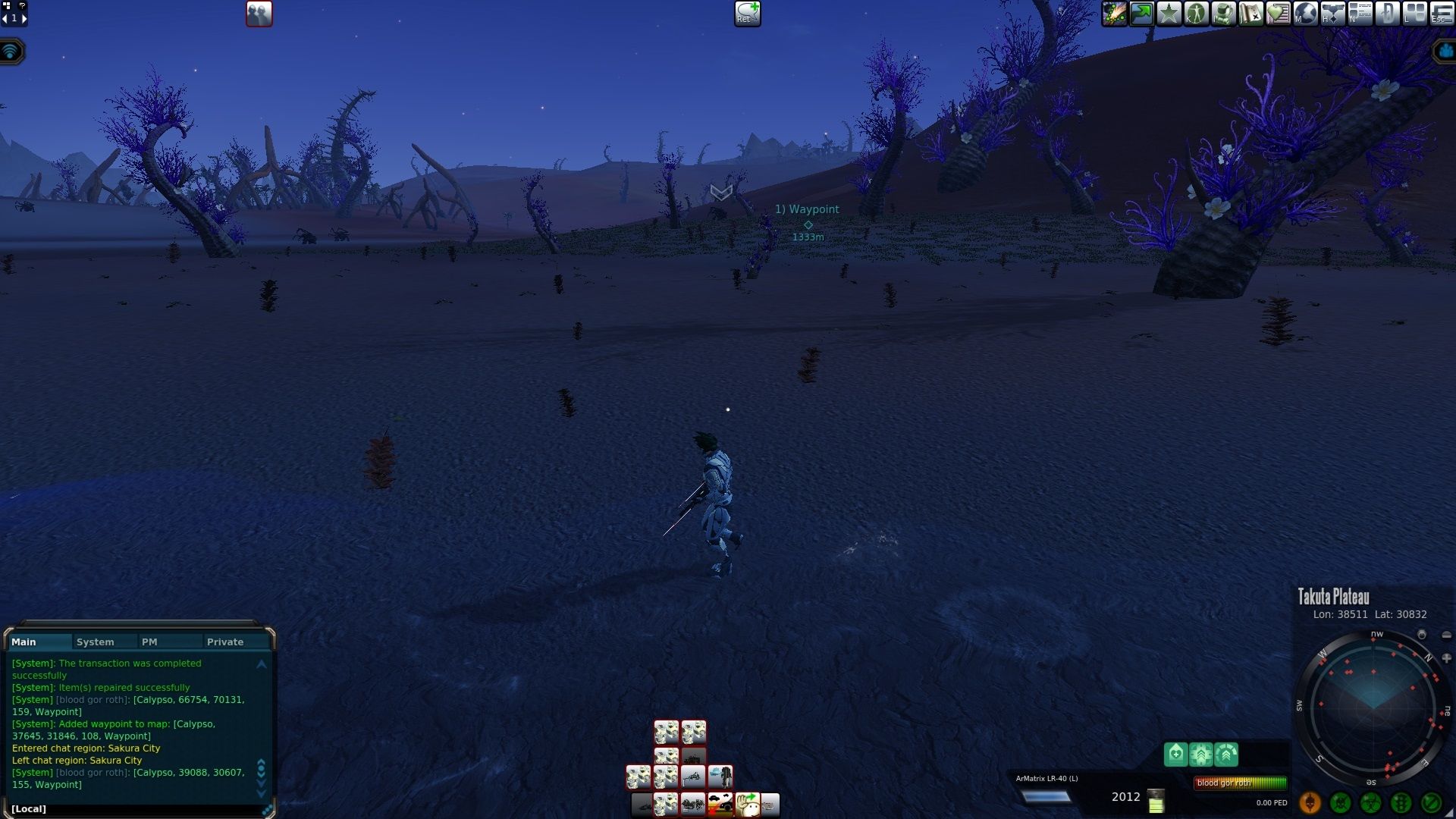 What is most interesting is that not every player is aware you can equip two laser sights. If you try and add two to a gun the second one will not attach. You instead have to attach the laser sight to the scope and then attach the scope to the gun. This also gives that cool two-laser sight effect of the gun itself.

Everything else attached to the gun is what I normally have. An extender since they are lower in markup to buy and absorb some of the decay of the item it is attached to. Along with an amplifier for more damage and higher efficiency for the gun. 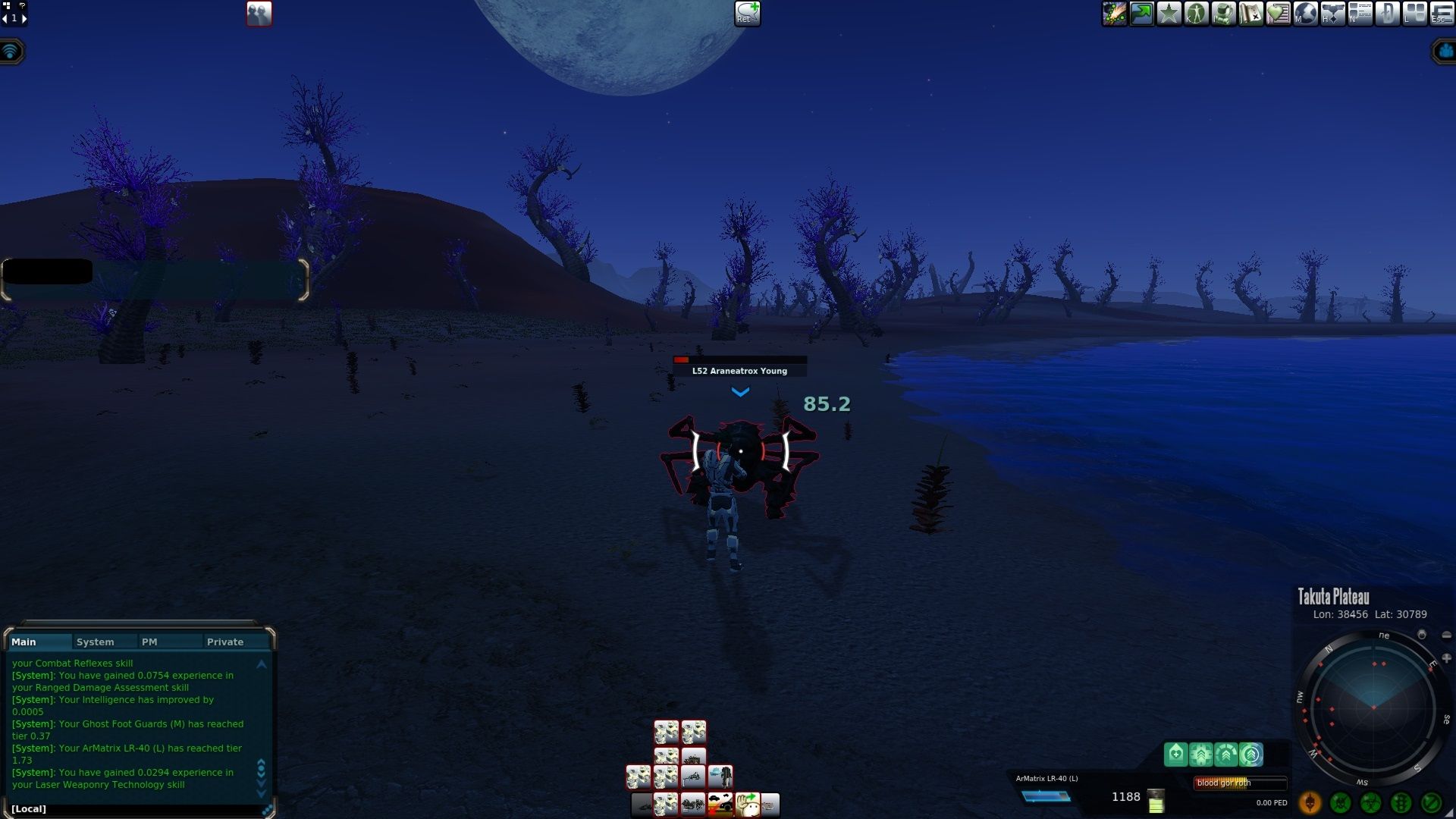 While I did do some exploring around on Takula Plateau I ended up at the same spot as before. The river or whatever it is gives me quite a nice natural barrier on one side that I don’t need to keep an eye out for creatures.

Araneatrox also die if they remain in the water for too long. That is something to be careful of to avoid getting killed by accident by water. If for instance, I get a lot of them spawning into the area where I no longer have the room I need to move around in. I can always just pull them into the water and let the environment deal with them for me. During this hunt, I also hit animal looter level 25. A very long-term goal of mine is to get this into the high 80s to 90s one day. I would not be shocked if many years from now if I was still playing I was nowhere near it.

I do at least end up hunting a lot of creatures that are classified as animals. Each time I kill one and loot it I have a chance at gaining skills that will contribute to the animal looter profession. There are also quite a lot of other skills that count towards it as well. Including many I choose from as codex rewards. 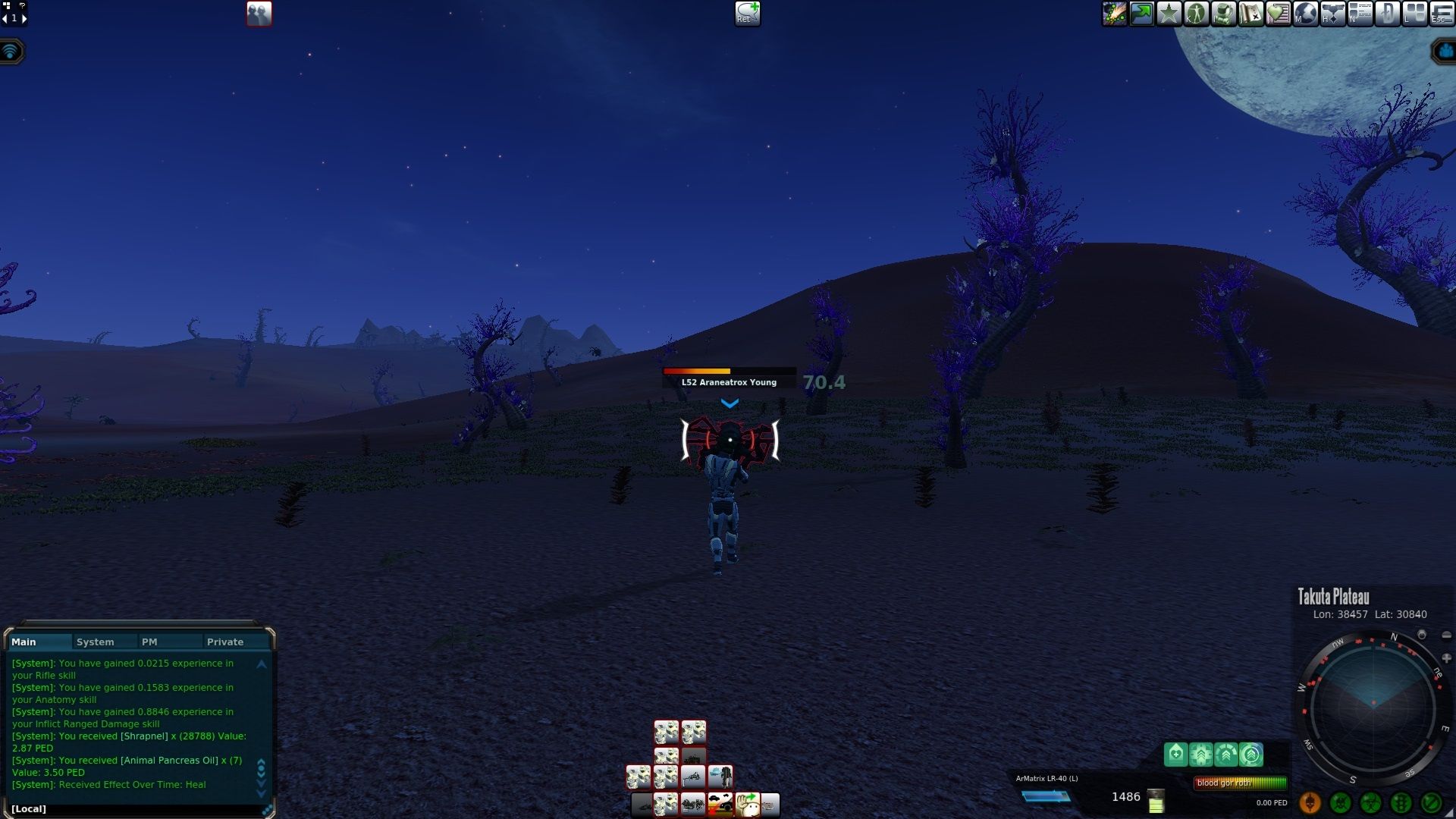 I have to say this place looks amazing for how old the game is at night time. You do get an amazing view of the moon here. There are also just some fun backdrops of mountains and even buildings depending on what direction of the river I’m facing to be seen. 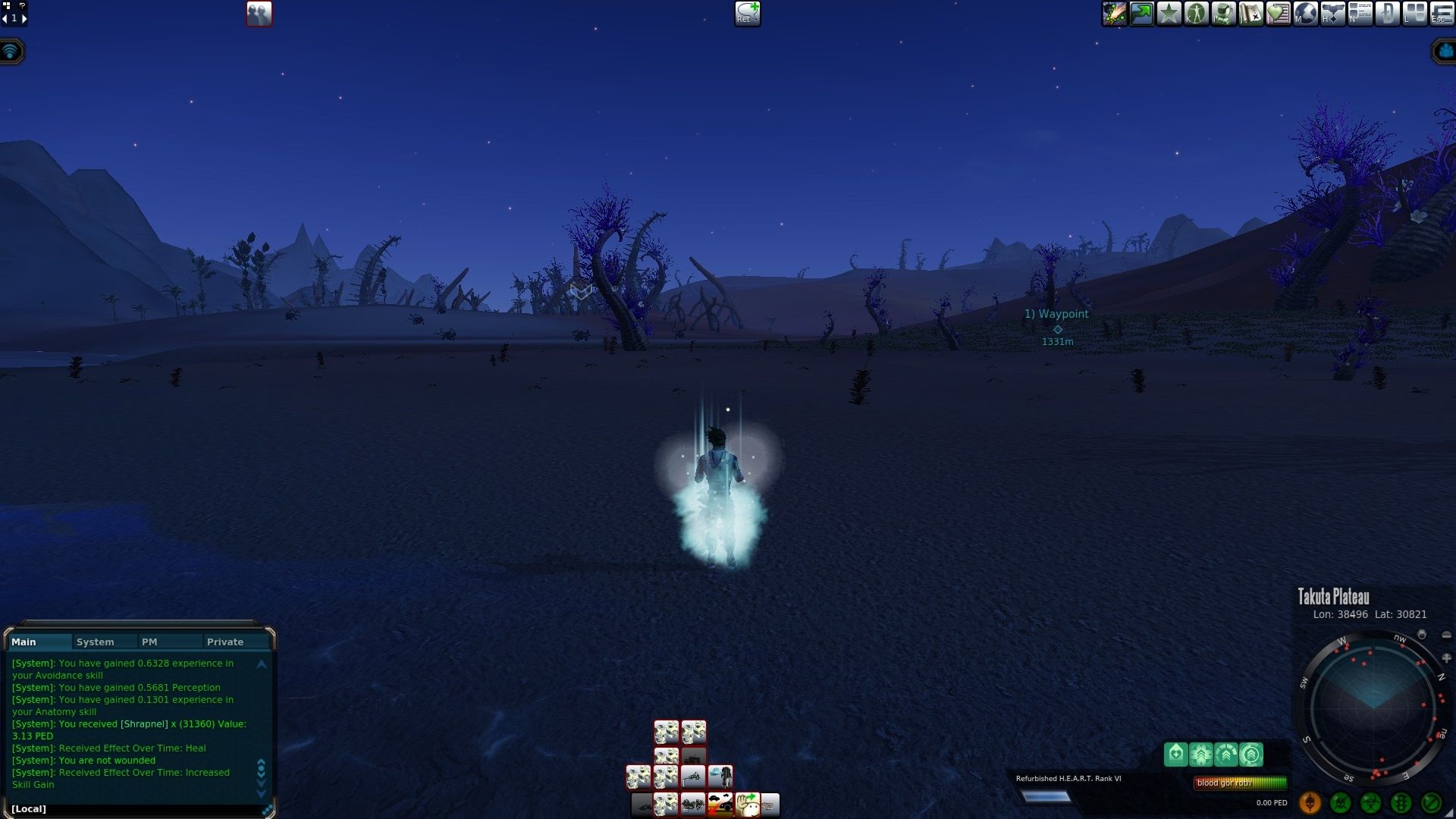 This ended up being another not-so-great run on Araneatrox. It is what I kind of expected. I was just not getting any globals off them here in this area. Add that to paying a tax to hunt on the land and my returns were suffering for sure.

While many players choose to hunt here. I decided it was just not the spot for me. I don’t die a lot but I’m still at a point on these where I’ll get killed a couple of times during a given hunt. This is still quite a large reason why I’m growing to not enjoy this area as much as I do over the other spot I knew they spawn at.

If things don’t start to turn around somewhat. I’m going to have to call hunting these things entirety. It is more than true that these are a much higher level than something I should be hunting in the first place. I however find it more fun than practical in doing so. It is also nice to hunt something that I’m not used to encountering in my daily grinds.