One of the cool things in the areas set up more for newer players are several missions that reward Universal Ammo or a small amount of skill gain. The mission creatures are quite easy to take out they just require a fair amount of grinding. There were also a couple of other things I worked on. 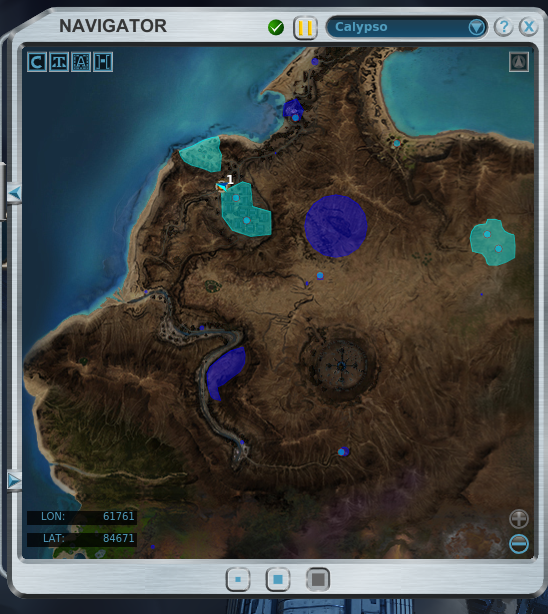 All of these missions I found were the result of having to run around to different CDF outposts for a mission I did a couple of posts back. Since they all were high kill counts I opted to return later. They were around this general region of the map. Between the teleport I’m next to at the 1, and south down along the river.

For the most part, I also ended up finishing off the TT (trade value) on the 5 PED TT gun I got a little while back. I would even later find that gun could be upgraded slightly. Since it is non-trade and you can’t sell it they can do some cool things with such an item that you usually don’t see. One of the first missions I did was called Clear Out The Digsite. It required you to kill 300 Berycled that were usually puny maturity. When I said this was a bit of a grind for a little bit of ammo I did mean a grind.

Since I already had rank 5 Codex for these creatures I gained little progress towards the next rank. I could however see that it was a starting player or had yet to grind a few of these that I would get some extra skill from ranking up the Codex for this many kills.

The mission also required that you killed these in an exact location that they marked on the map for it. There was a special spawn of Bercyled that had a high respawn rate. You had to be careful to not get mobbed to death. While I did not worry about such an event occurring I could see a newer player struggling if they get a few of these on them. While the first mission I did had a quick spawn rate all in one area that you did not have to leave. Lure Them Away which had you kill 300 Cornundos Puny did not. They were also spread out being mixed in with a few different kinds of creatures.

This one ended up taking the longest of them all. At one point even a few other players were working on this mission and everyone just took their corner of the area clearing out what they could when it spawned in. Since this mission also required you to be in a certain area as well you could not just go elsewhere and get credit for those kills. Since I was running this mission for the ammo rewards I did my best to avoid getting aggression on anything I did not need to kill. That however can sometimes be easier said than done. The 4.8 PED worth of Universal Ammunition was at least a nice sight to see for the reward. 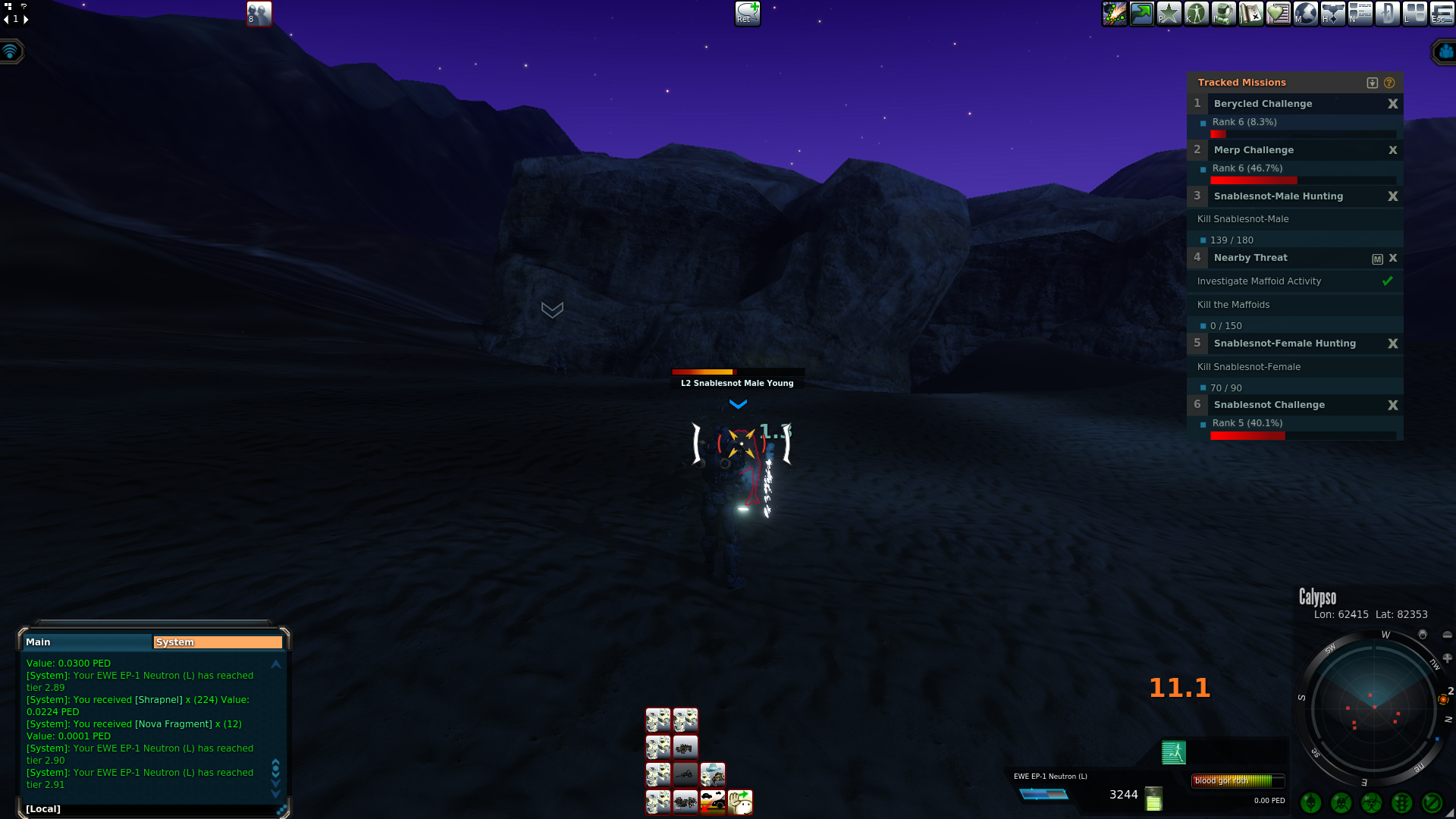 In the next area, I ended up working on two missions. The creature Snablesnot is broken down into the male and female versions. As such it had a quest for hunting each. Since the female is harder to kill it had half as many kills required.

It did not take long for me to work out that I had to be smart about how I went about this. While the missions had me kill twice as many of one over the other. It felt like the area had more females than males. It would be easy to finish off the females first and then end up killing extra ones when they got in your way.

I decided to do my best to keep the kill counts about double as high for the male as the female. That way I would be finishing off these two missions around the same time. I would not have to worry about wasting a bunch of kills that I no longer would get credit for. These were at least a higher mix of young and some older ones. This gave me a little bit more credit towards their Codex than some of the other creatures I had hunted for the night. While I was there for the ammo some free skills are always welcomed. The final quest I would be doing for ammo rewards was called Nearby Threat which had you kill 150 Maffoids. I had to crawl down into a pit-like area where they had a higher than normal spawn rate.

It was almost more like a brawl than anything else. They would be constantly spawning in and attacking me when they got the chance. As a result, I stopped worrying about ammo wasted since I would get some as the reward anyways.

While I was battling these another player showed up. While the special area could handle the two of us it was almost not enough. Unlike me who was fighting them down in the pit, the other player was sniping them from the hillside. Which looked like it made looting a bit harder to do. I then went to work on a mission for that spare rifle I had been picked up a while ago. It required going into an area to hunt some porotype robots. I ended up wearing the CDF Scout Gear I had picked up recently.

I however had a feeling I was not going to turn in the mission for the upgraded version of the gun. One of the points of using it was that it was “free” TT I got to decay on a weapon while hunting a bunch of lower-level monsters.

When it comes to mission turn-in for Entropia Universe they usually required an item to be fully repaired. Since the weapon itself only had 1 more point of damage and a very small almost a non-noticeable efficiency increase I decided I did not want it for now.

That slight increase in damage would edge it closer to a gun I already have for clearing smaller creatures. One of the things I liked about this rifle was it was even lower damage which was perfect. I might even repair it at some point if I end up doing more low-level hunts. It seemed to be quite ideal and not overkilling by much. I also did run my Feffoid Cave daily for the daily token. I think I usually use around 30 or 40 PED worth of ammo to work on this daily. While I don’t have any plans yet for what (L) weapon I want as a reward when I get enough tokens. I find running this cave rather fun.

It’s just a shame the rewards will be an (L) once I get enough daily tokens and that will break over time being tossed out. I’ve always found it fun to hunt the Feffoid in the cave. I might have to do a proper hunt on them at some point. They deal most of their damage as cold which I have no idea what kind of gear I would even want for that. 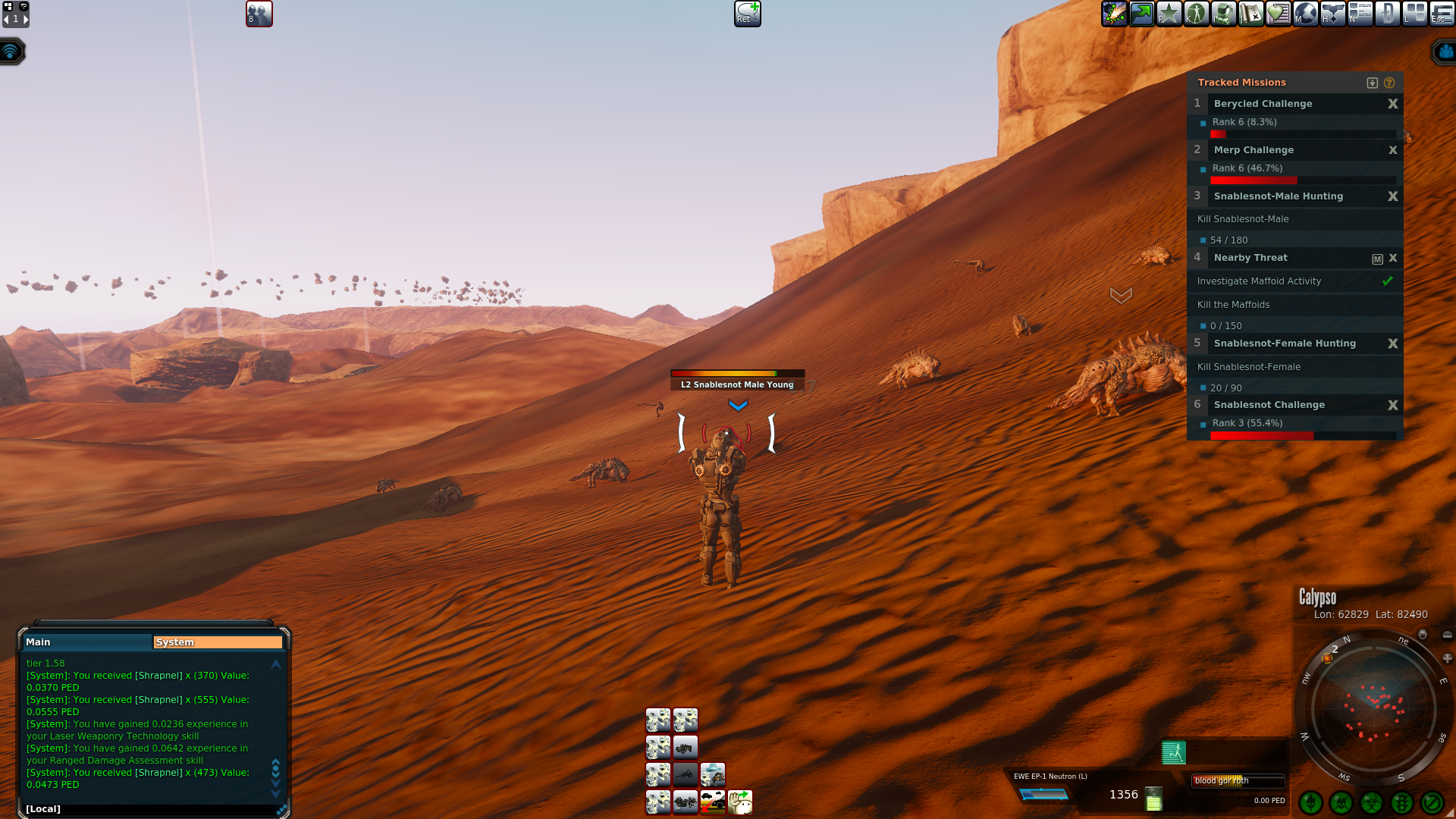 It was nice for once to clear out a few missions and not find new ones to add to my massive backlog of things to get around to doing. Other missions give out ammo as well. Some of them I have already done in the past and others are on different planets.