Not everything you do in Entropia Universe has to cost a lot of money. For quite a while now I’ve had a massive stockpile of missions collecting. On top of that since I have been gone for quite some time I suspect there are many more missions to find while out and about.

Planets tend to have some low-cost content on them to do for starting players. You might get a little ammo or a gun or even gear from doing the low-level missions. This can also be a great way for many players who go to a planet to have something fun and cheap to do. Since Calypso is my home planet I’ve done that content quite some time ago or at least I thought. Before I get around to checking out the area that newer players often go to first. I thought I would load up my mission tracker and try and find a bunch of checkpoint missions I had laying around. Most times you need to go to a different location.

While some of them gave no reward. There was a couple that gave some kind of skill reward. Since I can fly around in one of my ships and I recently bought a decent amount of oil. This was a cheap and slightly rewarding activity to do.

I got to see different parts of Calypso that I either never or rarely spent any time in. Despite the age of the game and not-so-great graphics anymore. I still find a lot of the landscapes, waterfalls, and riverways to be breathtaking in their way.

Once that was done I went back to the starting city of Atlantis. I noticed I had a cluster not that far away from the city where newer players end up venturing into. I also discovered despite being there quite a few times over the years there were some new missions to do. Since I picked up a starting pack when I returned I had possibly one of the more amazing starting guns I’ve used in quite some time. The Z12 Barbarella even came with its only weapon amplifier for more damage and some other attachments.

If I felt I was overkilling things could just drop the amplifier for less damage. While the gun did seem a little overpowered for taking out puny creatures. I found it to be quite the powerhouse to have a little deeper in.

At some point, I might take a look at my skills and find a different type of weapon that I have low skills in that would be worth leveling up some. It’s not uncommon for players to level up a bunch of different skills as they tend to have an impact on others. 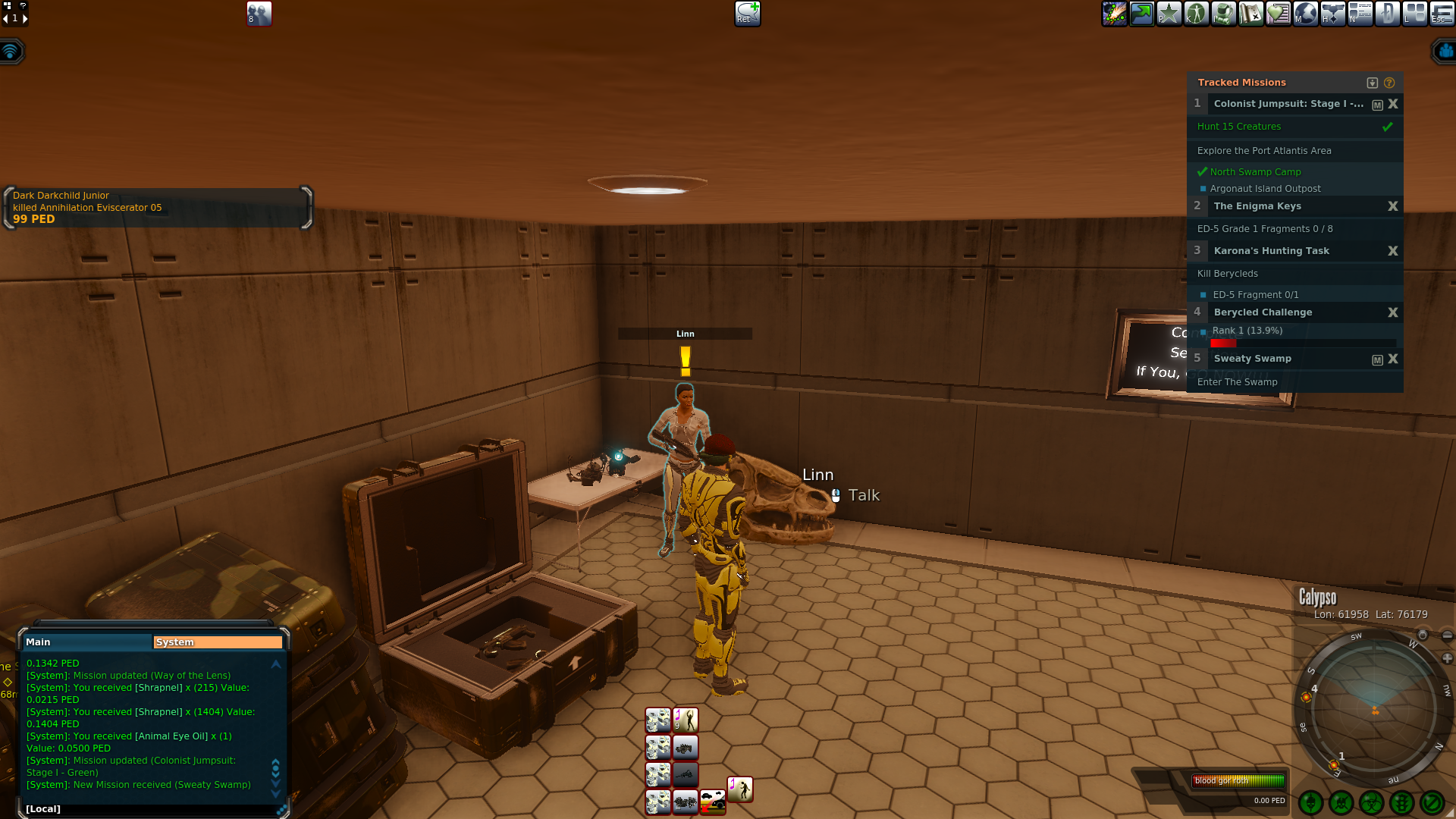 For the most part mission around the swamp did not take very long to do. They even had me go out and do some basic actions like sweating a monster, killing 10 of something. There was also a mix of just going to a location and reporting back.

There was also another big reason I wanted some low-level activities including doing some hunting on Calypso. While I was away they added a Codex system to replace some of the old massive iron killing missions. 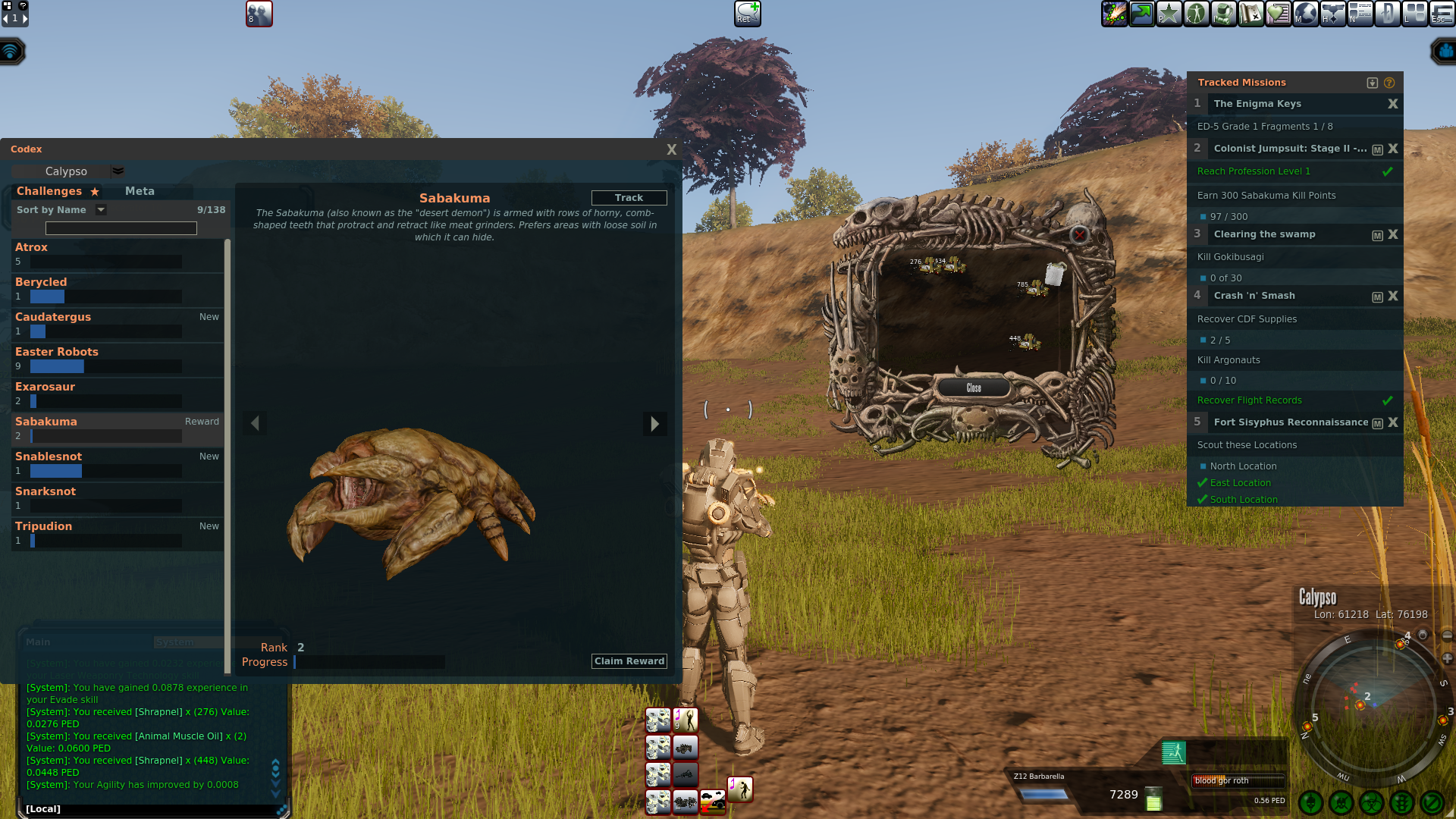 Codex once you reach the next rank after killing enough of the same creature reward your skill gain. While I don’t expect the lower level ones to reward huge skill gains. Their progress also counts toward the Meta Codex which rewards things like intelligence. I have no idea how many ranks a Codex has. It’s however a system I want to play around with more.

The codex seems like a kinder way of having the player do massive grinds for skill rewards. I remember back in the day finding iron kill missions for a certain creature. I think the biggest I would have ever done was having to kill 10k of something. I spent quite a long time in the same area. After a while needing to grind that much for a single mission gets to you.

Since it looked like I would be killing a bunch of lower-level creatures for some time I also swapped out the gear I was wearing. My Adjusted Pixie with plates was way overkill for what I was doing. The Adjusted Harrier Assault gear I have that provides some +1 and +2 protections was going to be more than enough. Wearing the set also gave me a nice 8% increased run speed which was perfect for doing a bunch of missions in an area.

I also would not be using my normal Vivo T20 (L) for healing. Since it’s an (L) and it can’t be repaired I switch to the 10-Pulse Unit that I have since it can be repaired. I did not need huge heals and healing up to 18 life at a time was more than enough for the most part. 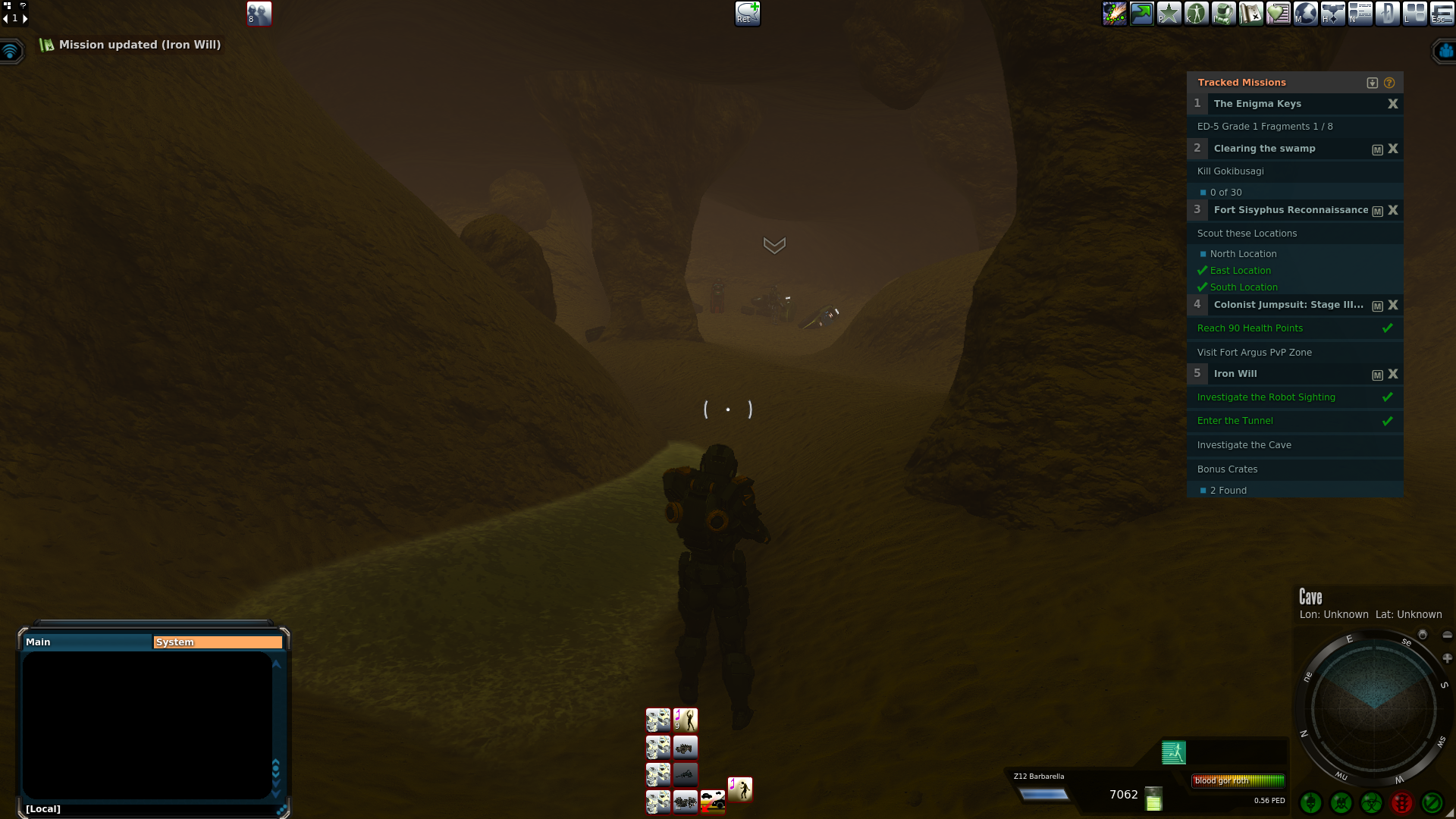 After doing quite a few other missions I ended up working on one called Iron Will. This sent me into an instanced cave dungeon. While some planets in Entropia Universe are quite known for some amazing dungeons the planet Calypso does not come to mind for such things.

I more than welcomed the opportunity. For the most part, it was a rather short dungeon. The place was filled with some low-level robots. I seem to be killing a lot of robots this month and this would not be my last time either. After clearing some small areas I made it to the final room in the cave. It had a couple of robots to kill. I thought I was done after that. That is when I found out this cave has a puzzle in it. I spent more time trying to solve the puzzle than I did clearing it.

Thankfully after a short while, I noticed a pattern and took down some quick notes. It was late at night. I was more in a zombie state of mind of just killing the next thing in front of my character in-game than I was into problem-solving. 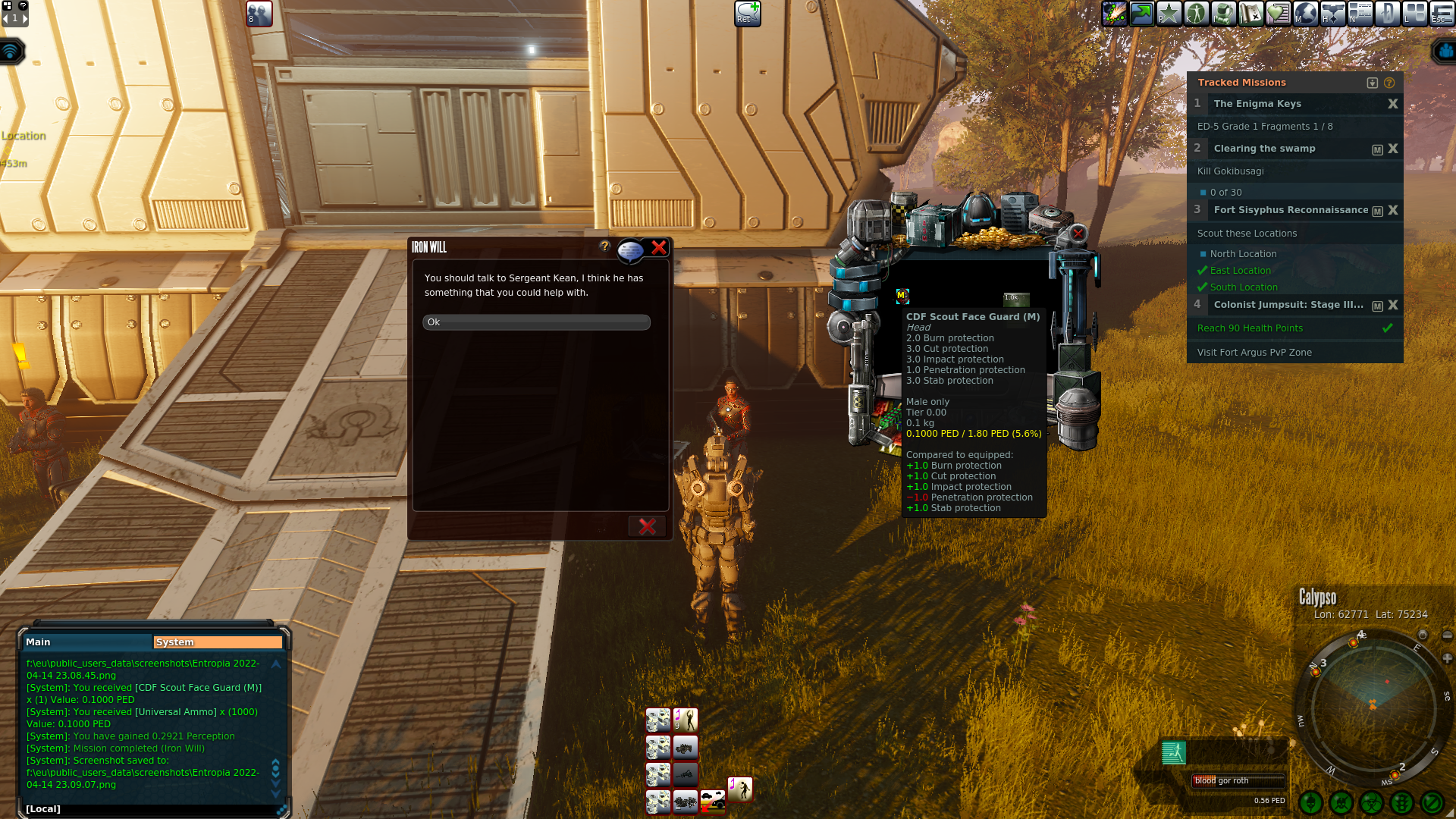 I went to turn in the mission expecting some low-level skill gain and maybe some small ammo. That is where things got a bit more interesting. On top of those things, I also got an option to select a piece of CDF Scout gear. To keep things simple I first went for the faceguard.

This gear does not provide much protection. It is for the most part a slight improvement over the Adjusted Harrier Assault set I have. It also looks like it’s set up for wearing against robots. Since I don’t have a lot of gear sets right now I more than welcome getting more. This got me thinking. Can I do more missions and finish off the set?

After a quick wiki search I discovered there were 7 missions in total that reward pieces of the gear for CDF Scout. Some of the mission lines had other requirements before you could do them. It all however looked to be lower-level stuff to do which is perfect for what I’m looking for.

While sure I could go out and attempt to buy the set. Each piece appears to be selling for only TT+1-3 PED. While not a crazy experience set being able to earn it is more fun. Not to mention most of the set was not even for sale in the auction house anyways. So I would need to at least earn a few of the pieces. Many of the missions to get the remaining CDF Scout gear pieces are also a bit of a distance away. I still had a few more missions in the local area I wanted to get around to doing. At some point, I’ll work my way over to that area.