Leaving off from doing some missions around the swamp area on Calypso. I still had quite a few more things to do before I would be heading north to finish off the CDF Scout Gear set. Some of this even required me to pull out my bigger gun to get it done. 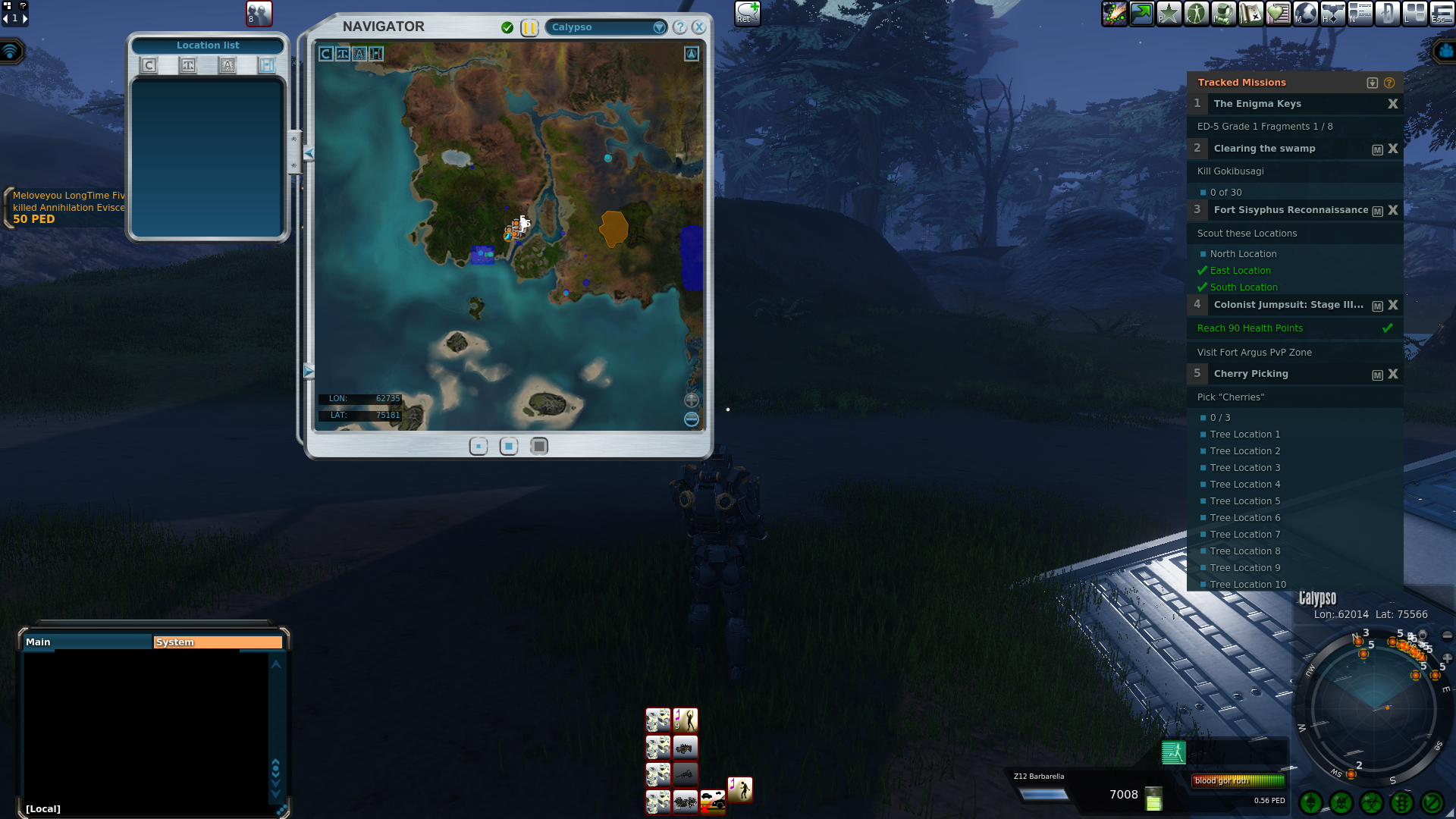 Of all the things I thought I would be doing in a video game, not on that list is running up to a bunch of trees to see if I get a message that they had fruit on them. That is however the way things are going.

I wish something like this mission was a little different. For those that don’t know one free activity that many free-to-play players do is walk around looking at the ground. There is a very slight chance that you could find a lootable rock, fruit, and yes even dung.

I love looting the dung as I usually carry a single unit of it with me when I fly in space. Space itself is a lootable PvP area. When I get blown up by space pirates I love to leave them dung. I am however not the only player that use to do that. Pirates at least back in the day use to get so much Dung they use to sell them at the auction house. I guess the joke is on us they managed to make money looting dung off all the people they murdered that thought it was funny to leave them some.

Despite Entropia Universe is an older game it is rather nice that they include waypoints for a lot of the missions out there. While it is an important skill to learn your longitude and latitude for finding the location on the map yourself if that is all you have to go on. It’s nice when it’s made easy for you.

The cheery picking mission however had quite an interesting lesson to teach all on its own for those paying attention. Such unwritten lessons in Entropia Universe often go unnoticed. I however do like how they did it.

All the trees you had to search were in the middle of a swamp covered in Allophyl. These creatures are also a little harder than other things players might have run into by now if they are newer. They are still possible though if you are careful you won’t even need to kill a single one. Quite an important thing to learn Entropia Universe is taking advantage of the radar. While some creatures have massive aggression ranges. Something like Allophyl has quite a small one. You almost have to bump into them for them to even care.

I did kill a couple for fun and to see if they had a Codex and for some drops. I think I could have done this entire mission without needing to shoot a single bullet. All despite how crowded the area looked. I prefer the guns blazing way of doing things anyway. 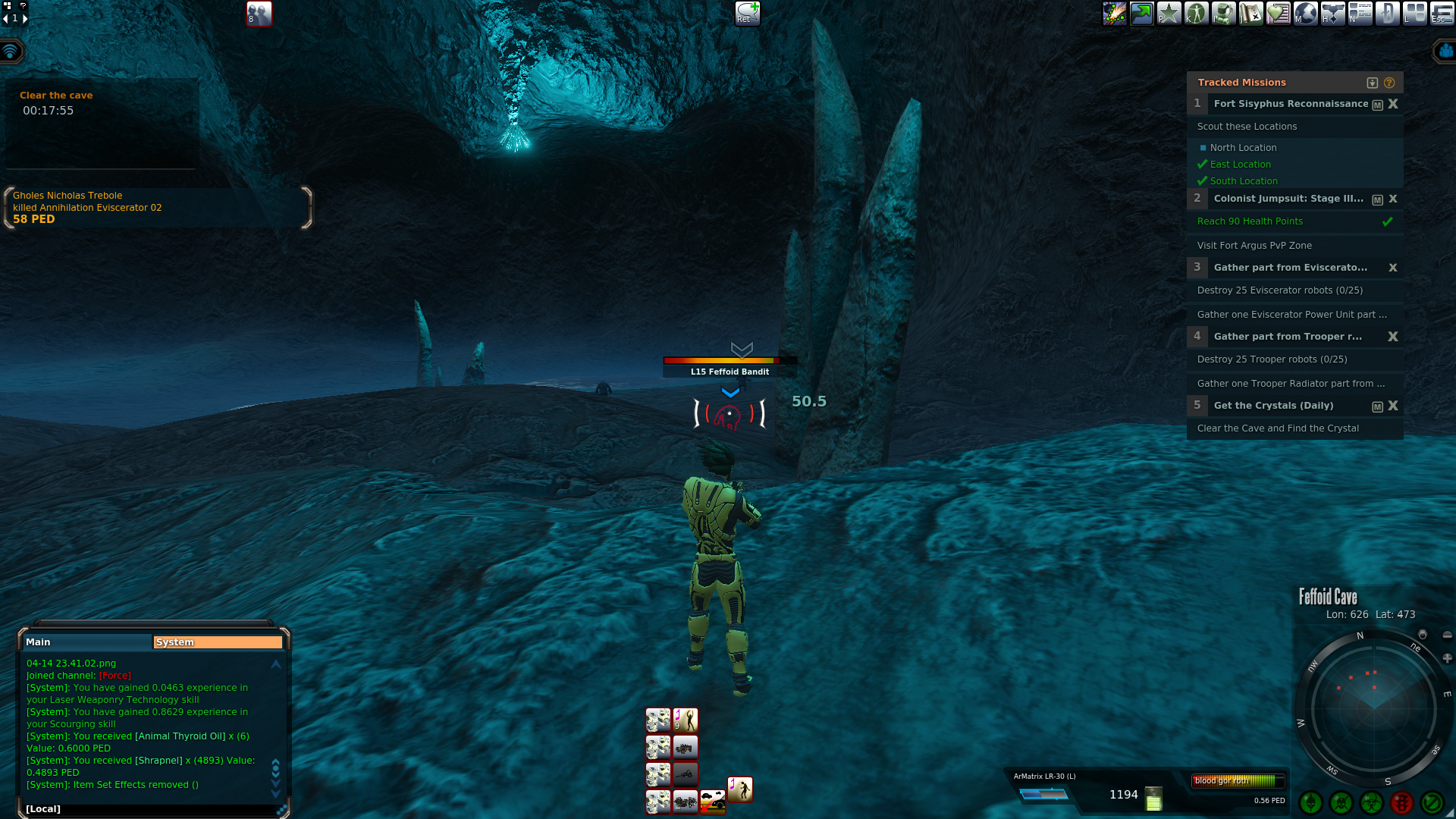 After a few more missions I was getting low for the time being on what I had to do in the area. So I took a look at what I had and noticed not that far away I had a daily mission to go into a cave and kill some Ferroid Bandits.

I’m willing to admit daily missions are not something I have done a lot of in the past. There are quite a few different kinds of them such as this cave mission. There are also ones for mining and crafting as well.

Completing one of these daily missions rewards a daily token. Those daily tokens can be redeemed at a special vendor that sells weapons, clothing, and some other items. A lot of items would take you months or even years of doing daily missions for the better stuff. This is why I never put much effort into doing them.

While I’m not a big hunter of Ferroid I do enjoy hunting them. I have also done this cave in the past and if I recall this mission is the same every day. I might have to make it a habit of running it daily.

This did require me putting on my Adjusted Pixie gear and pulling out my bigger gun an ArMatrix LR-30 (L). I tried first shooting them with my lower-level gun but that did not go so well. After I finished off that daily it was time to head off to Fort Sisyphus. There I would find the mission chain for acquiring a few CDF Scout Gear pieces. They are all robot-killing missions except for the scouting starting mission.

Since the robots were harder to kill than what I had been dealing with in the swamp I kept on my Adjusted Pixie gear set. I however put away the ArMatrix LR-30 as it was not quite needed. My other gun could kill most of these robots in 15 or so hits much cheaper anyways. 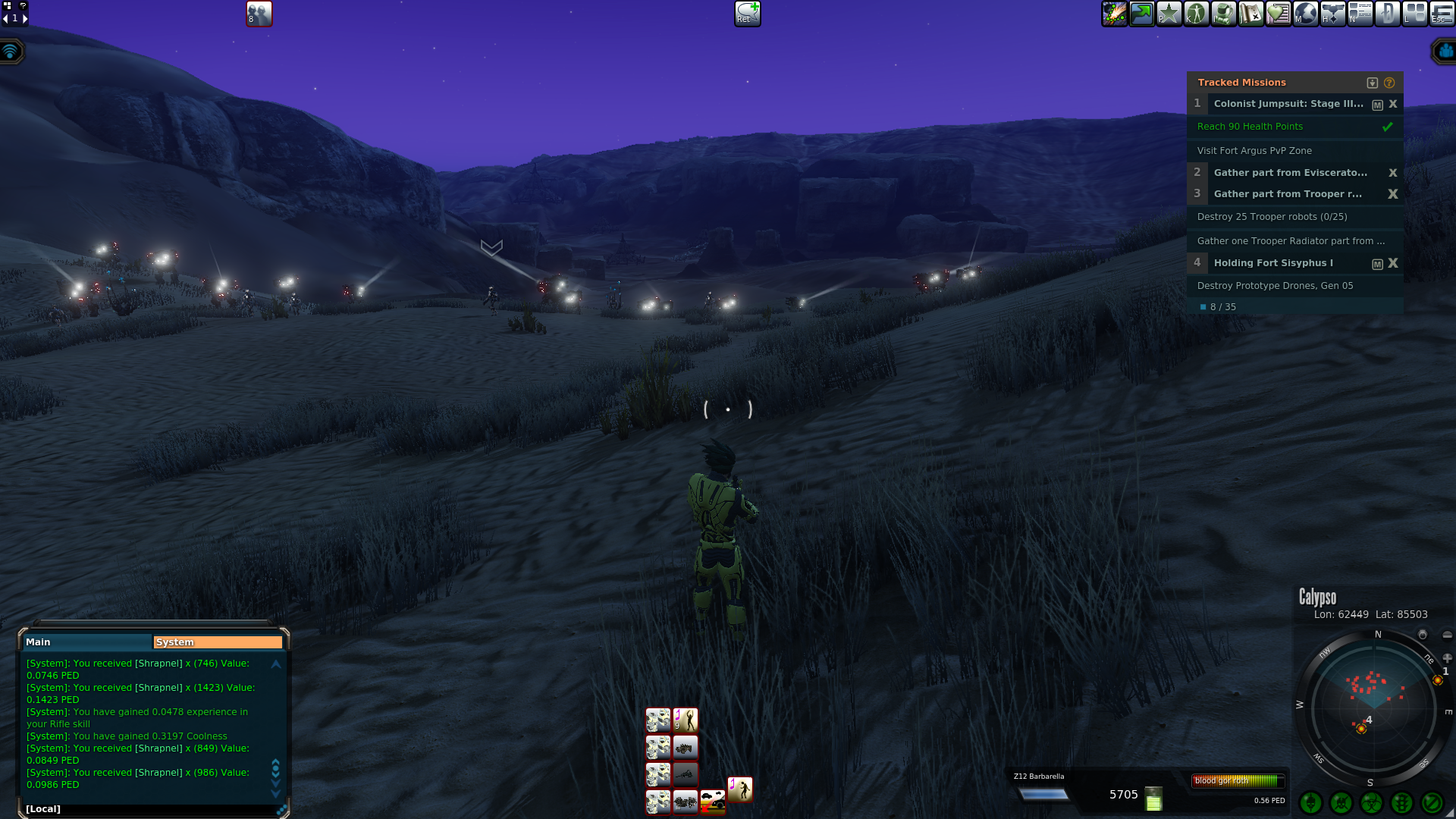 In the first mission of Holding Fort Sisyphus, I had you go out to a hilly area and kill some Gen 05 drones. These robots were ranged which makes them a bit more annoying to deal with. They were also mixed in with drones not needed for the mission.

Usually with my medium range on my guns pulling anything out of a pack is easy. However, when dealing with a ranged unit they will only move forward a little bit before they are in range to shoot me.

This issue was further compounded since the area for them is on a hill. My best way of dealing with things was shooting them to tag them. Then walking back a bit so they would move enough forward I could loot them safely. I then opened fire once the hill was no longer blocking my line of sight.

On my way back there was some random event that had started. There were other players as well working on it. I joined in and killed a couple of robots. Once the event finished if you were supposed to get any rewards I did not.

I still have no idea what the random event was even about for protecting the fort. During my remaining time in area I also never noticed the event starting again. It looks like I’ll have to do some further digging into what that was all about. The next mission Holding Fort Sisyphus II was in a much more open and not as hilly area. These robots were a bit more in a dense spot. I had to kill a couple more but it was more or less the same thing.

I also noticed I go to a few different types of (L) guns for loot. While these guns were quite low value they had a decent markup and it seems like a small amount of them sell every week. I also looted quite a few of them during my time in the area. Missions for Holding Fort Sisyphus III and IV were more of the same. Go out and shoot some robots. Come back and get a piece of gear and a small amount of ammo as a reward. Just like the first two missions. Something amazing did happen while out working on the fourth mission. Different creatures in Entropia Universe have different minimum thresholds to get a global one. For a lot of creatures, it is around 50 PED. On these Prototype Drokas Gen 5 robots, it’s much lower.

Getting 13 PED worth of loot off something this small was quite amazing. The (L) pistol that even dropped was full trade value. It’s a shame the market history for it has been zero sales over the last year with further data showing almost no markup.

Perhaps it will just be vendor fodder. I might look into the gun a little more and see if found myself a new low-level pistol to use till it breaks. I could use a non-rifle weapon for some small hunts. For now, it went into my storage.

After Fort Sisyphus, I went off on a chain of missions that took me all over the place. In many of these places, I would accept whatever random missions I could find and run them if they were quick to do. 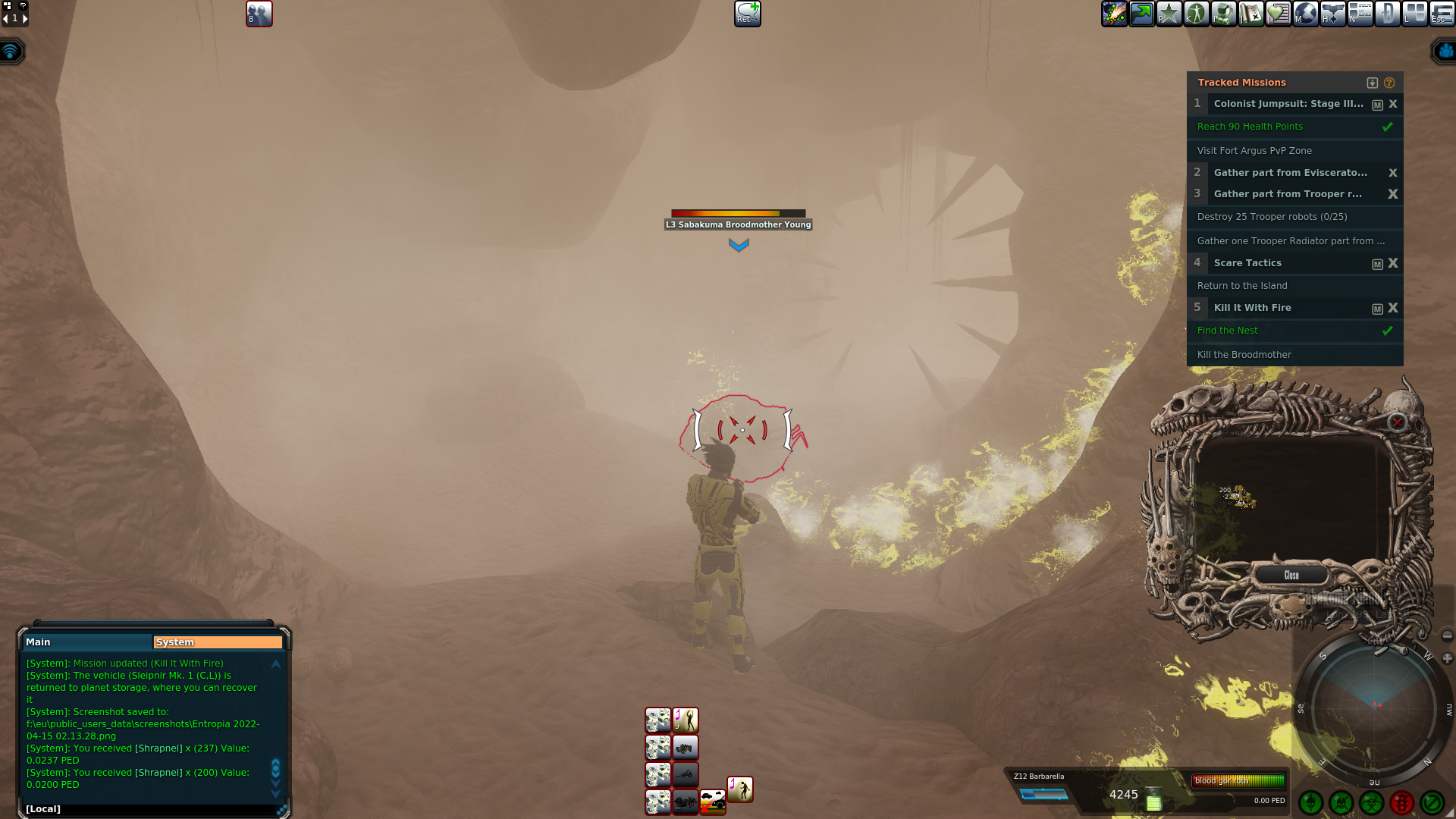 One of them led me into another instance for Kill It With Fire where I had to kill a Broodmother. Quite the ugly-looking thing. The universe is now a much safer place without it.

There was mostly a lot of flying around. Eventfully I got an armor voucher that I got to turn in for the last piece of the CDF scout set I needed. From the looks of it, I could also go find a mission to earn some plates that fit well with the armor. For now, I skipped doing so since those plates are sadly (L) and therefore cannot be repaired. From there I went on some wild go find CDF outpost locations. Each of these locations then had missions for me to kill either hundreds of creatures that I only would get credit for if it’s in the area. Along with some mining missions.

Both of these types of the mission were quite long so I skipped over them for now. While my overall goal was to reduce the total amount of active missions I had. It seems I have added a lot more to that list. Perhaps an adventure for another day. I love the red and black on the CDF Scout Gear set. I took a few screenshots of my character modeling it with his crazy green hair. I wonder if there are any other gear sets I can pick up from missions. As that was much better than farming a monster trying to get all its gear drops if it has any at all as they tend to be quite mega rare.