While I wait for a bunch of stuff to sell at the auction house I went on quite a cheap puny hunting trip at Camp Icarus. I was so cheap I did not even decay my weapon for the hunt. After all, I wanted to be on a tight budget.

Like many things in Entropia Universe if you can work on a bunch of stuff all at the same time that is just being a smarter player. I had a mission line of collecting ED-5 Grade Fragments from the NPC next to the teleporter in Port Atlantis named Karona who gave out hunting tasks. I wanted to work further on my codex for a few monsters that can be found at Camp Icarus. I also wanted to go on a low-budget hunt.

The Enigma Keys missioni itself can have you kill a few different kinds of monsters among other things. It will always tell you on the mission tracker what you need to kill. I ended up getting Caudaterguses a couple of times. You can however only get the next stage of the mission an hour apart from the start of the prevue one. This ended up being perfect for me since I needed to take a few breaks during this hunt anyways.

While you could kill any maturity of the monster being asked for. I know there are some massive herds of them at Camp Icarus. There will also be a lot of players from brand to new to old. The best advice I can give in a heavily populated new player area is to take it easy. Everyone is just targeting the next monster they see in their line of sight. People do and will shoot at the same thing around the same time on occasion by accident. If happens just turn off your gun and move on to something else.

If the creature ends up running towards you as the other player has done the same as you then continue fighting it. Once the creature is dead make sure it gets looted regardless if you finished it or not. It might be that you ended up doing more damage to it and the other player cannot loot it themselves.

The wrong thing to do is to go raging on the other player. Unless someone is going around harassing new players one shooting everything they are trying to kill there's no point in getting angry. Even then a shouting match won’t solve anything.

As far as the hunt itself. After I teleported over to Camp Icarus I went to the second floor of the outpost building there. On that second floor is an NPC who I don’t know if I’ve done quests with before. All I do know is he tells me to bugger off. Not before giving me Bukin’s Spare Rifle that had around 5 PED of “TT” on it!

The gun itself cannot be traded or sold. While it’s not the best thing ever for hunting. Puny maturity monsters it will just fine for. It’s nice I don’t have to decay my weapons for ones. Such opportunities are rare but can be found on occasion in the game. After that, I ran off to kill some puny monsters. There are some nice and dense populations of them all over the place.

Since this is a budget hunt I only took 10 PED of ammo with me. I’m using Bukin’s Spare Rifle; otherwise, I would be using a low damage weapon that is not over killing what I’m hunting. I’m also wearing my Adjusted Harrier Assault gear for the tiny amount of protection it gives.

What I’m not doing is running around in Pixie Adjusted or better gear. I’m also not using my high dps rifle to one shot either. All that is way overkill for puny in the area and it’s just wasting money on decay bills. Not to mention wasting ammo on overkilling. Some players for whatever reason like to go Rambo style on the puny monsters.

One nice thing is with the Shrapnel dropping now a day is you are always getting loot. I remember back in the day you could go puny hunting and kill a bunch of them without getting any loot. If you had a really bad run you had almost nothing to show for it.

Since I only took 10 PED with me once I run out I would just covert my shrapnel into more ammo. Converting shrapnel instead of selling it gives you 101% of its value in universal ammo. Universal ammo cannot be traded or sold so keep that in mind.

For those that take things to the extreme. You could even make sure you are only converting amounts of ammo that would result in whole numbers. I don’t stress that much about the game so any slight rounding down in this situation I don’t care about. During my hunt, I even had some codex rank increases. This included getting another attribute to pick as well. Not bad for such a low-level hunt. Sometimes it’s just nice to work on small things. 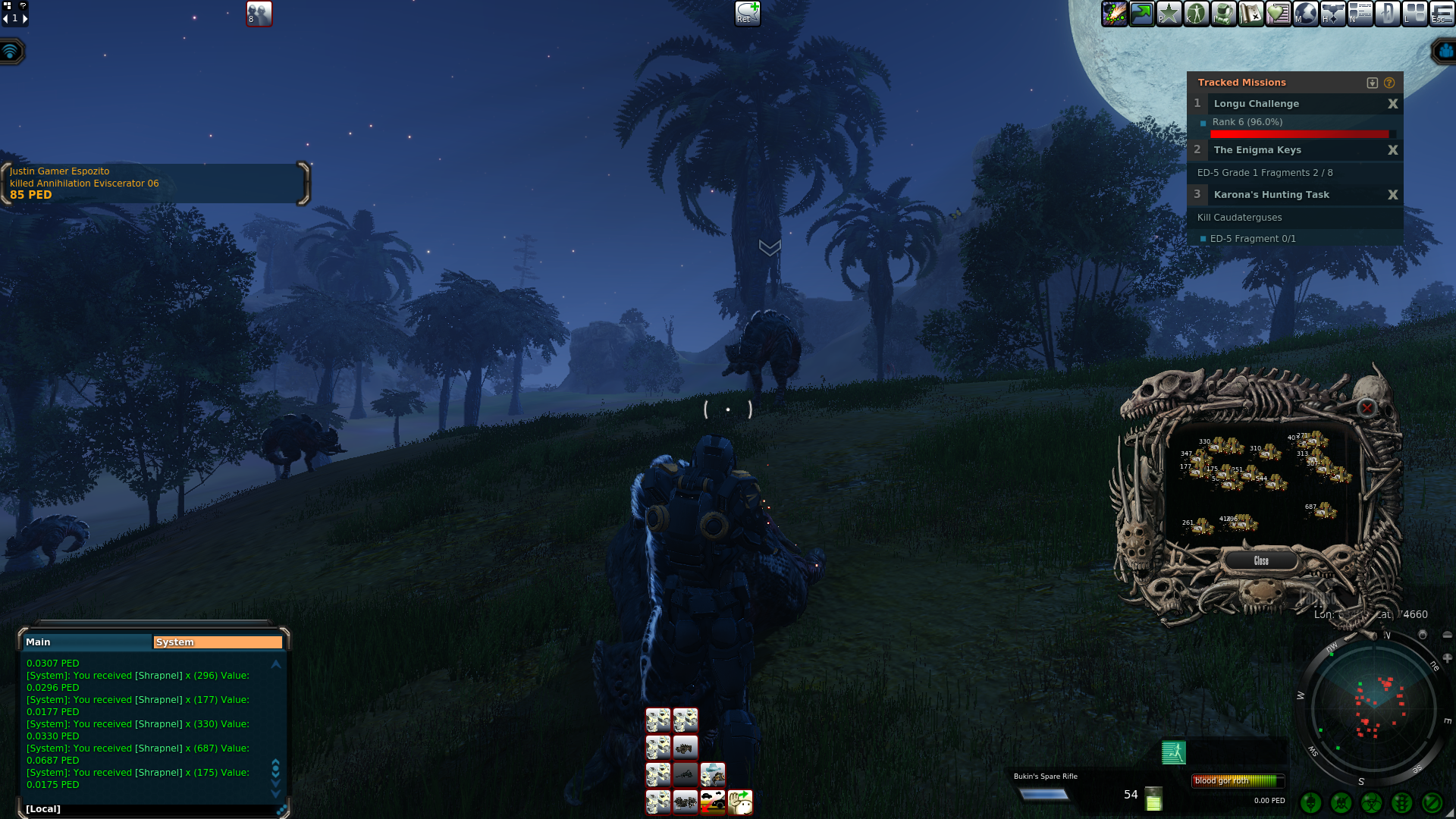 After the hunt was over I just had a small amount of decay on my gear. I ended up turning a slight profit for the day overall. This included finishing The Enigma Keys I and getting the mission reward. I however forget to get any screenshots of the small cave that had a puzzle in it.

Overall a decent little hunt. It’s always nice to have something cheap to want to go do while you are waiting around on things like stuff to sell at auction. There appears to be a second part of The Enigma Keys were they send you out to hunt harder monsters.