Not every grinding session during Merry Mayhem will have something interesting or even worthwhile. Most times it’s just me grinding away late at night or at whatever odd hours I can. Other times you have instances like this that occur where I racked up quite a lot of points for Merry Mayhem.

I entered and exited a couple of instances for the day thinking it was going to be just another average day. I don’t always have time to play for a full five hours without getting interrupted so it’s quite normal I’m not always finishing an instance to the end.

What is important is I try and make the best use I can of the 100% skill gain boosters I’m running. If it was not for those I’d just afk for half an hour or an hour if need be from within an instance. However, you can’t freeze buffs if you are online. As such I choose to log out if I need to be away for more than 15 minutes to preserve the remaining 10-hour-long boosters I’m consummating during this event. Not that far into my third or so instance for the day I get my global for the session. A small 52.41 PED was quite needed. As this entire event, I’m running far below the 93.6% return rate I determined I’d need to accomplish my goals. While that would not move the needle much it at least helped save what would be another massive losing session.

For whatever reason, I felt like trying to stick it out as long as I could in this instance instead of letting whatever came up distract me away forcing me to log out yet again. I wanted to put some heavy hours early on into this event.

That would make sure I’d have a lot more breathing room and could afford to miss a few days of grinding when the time came in keeping up with the 850 average I needed to stay on pace for my goals in this event.

I managed to finish off my second daily mission for Merry mayhem for five Mayhem Tokens. One of the goals I’ve set for myself is to try and get to the 4th stage in the daily mission every single day I can. That goal it seems would also be keeping me ahead of the daily points I wanted to grind for the main mission Merry Mayhem Annihilation. 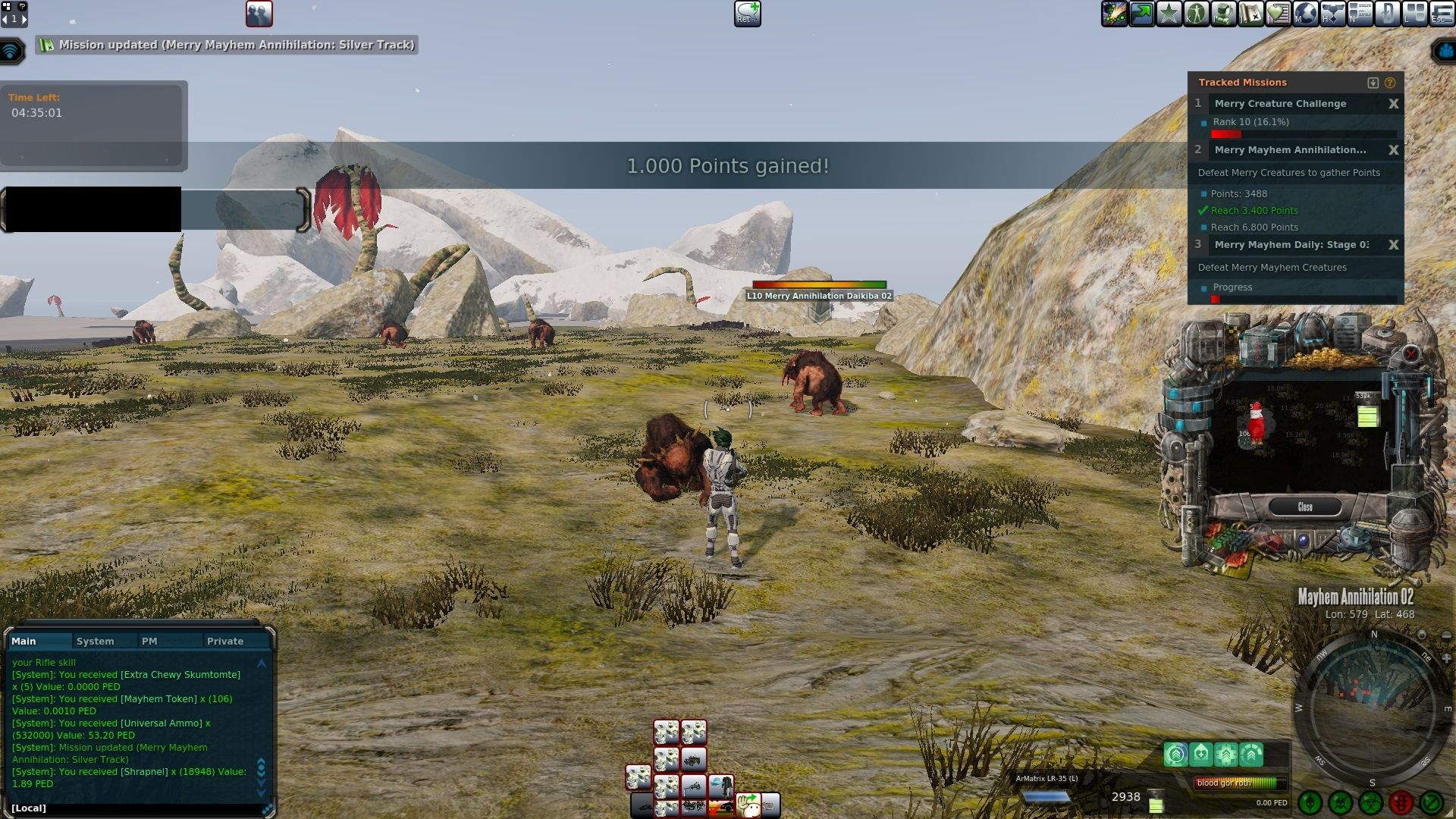 Nothing was indicating to me that this was going to be an amazing instance for point grinding up till this point. Then it happened the first 1k points for instance run gained. It was also enough to finish off the first tier of ten of Merry Mayhem Annihilation. Netting me 106 Mayhem Tokens, 53 PED of ammo, and some Chewy Skumtomte candies that grant you short-term buffs when consumed.

I’ll be saving the Chewy Skumtomte for the time being. As I would feel like a waste using them now when I don’t need them at all. They will join the pile of consumables I got during the Halloween and Easter events earlier in the year. Perhaps one day I’ll find an event or a large hunt worthy of using them.

I ended up getting to the first boss a little behind the 30-ish-minute timeframe I was aiming for. The boss even gave me better-than-average loot but not by much. The boss however did not give me any points for killing it. It is a hit or miss if you will get 100 points or zero from a boss kill in this category of instance.

I gained a few 5 and 10-point kills on occasion. Just a single 1k point gained was more than I needed for the day. I was already rather happy with that as a result even though loot was not the greatest. An hour after getting my first 1k-point kill I ended up getting my second one! That had settled things for me. I was going to see this instance till the end if I could. Whatever tiredness I had flooded out of my system with the excitement of gaining 2k points in under 2k hours.

I also noticed I had a perception gain so I hunted around in this area to try and clear the pack of creatures out the best I could. That did not seem to lead to anything else is found. After a while, I ended up moving to another location within the instance itself.

I also was wondering perhaps how often everything moves around in the instance. If there was something that was giving off perception gains I would find it again. It is however in my own experience never a guaranteed thing. Most things that can cause it to trigger are however not possible in this instance other than creatures around you or a false positive if the perception theory holds up.

After moving around further in the instance I noticed I kept getting more and more perception gains. Then I seemed to have hit a cluster of creatures that were giving much higher averages than usual from 6 PED to 25.39. So I kept clearing them 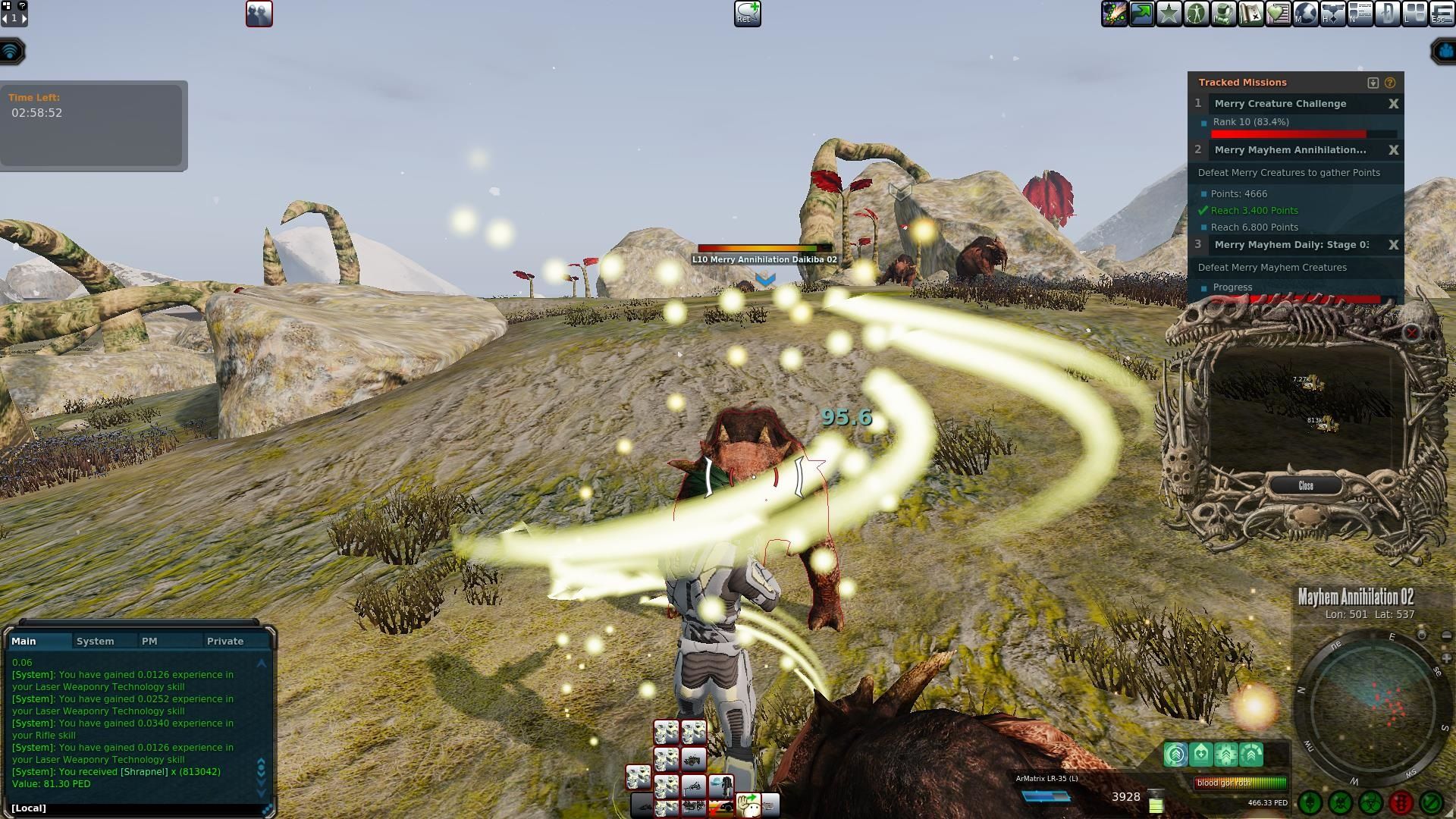 Shortly after that, I looted 81.30 PED of shrapnel. You always have hops when you get a global and it’s a little bit bigger than normal that you will find an item along with it. I’ve yet to get any interesting drops in terms of loot in this event so far.

It is also a bit alarming looking back and noticing I got that global when I had 4,666 points. I’m almost shocked it did not give me 66.60 loot or something as well. I guess it’s just a random coincidence that it occurred exactly at having that many points. 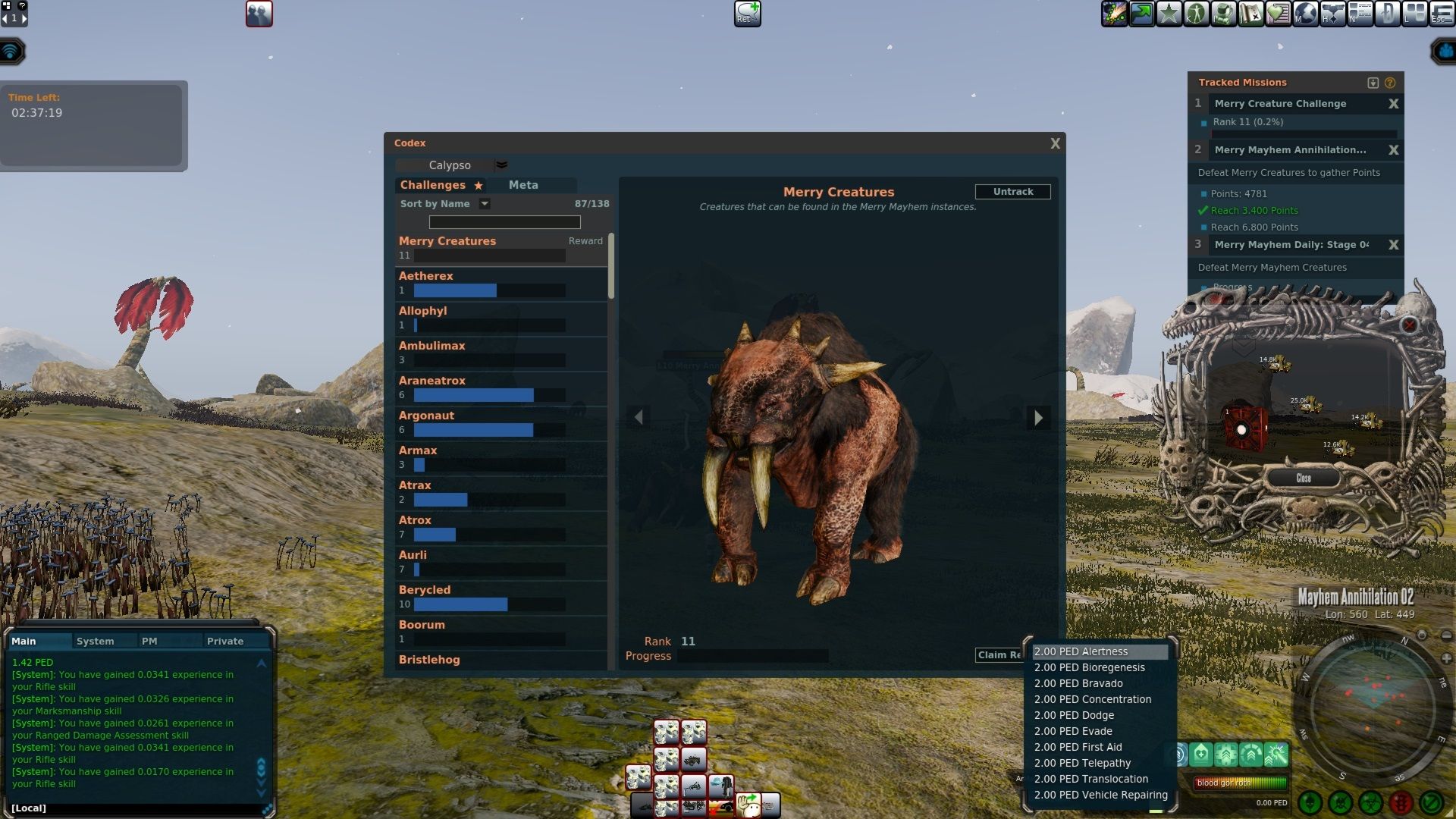 After that nothing that exciting happened for a while. I did manage to finish off my second codex reaching rank 10 in this instance. I had gotten rank 9 within the first minutes of being in the instance. Rank 10 offered a rarer section of skills I could pick from. I ended up selecting 2 PED of skills for Alertness.

Half an hour later from that I ended up killing a boss that rewarded me with 100 points. Several other bosses I would kill thereafter would also give me 100 points. This kept giving me even further incentive to just stick around in this instance instead of calling it a night. 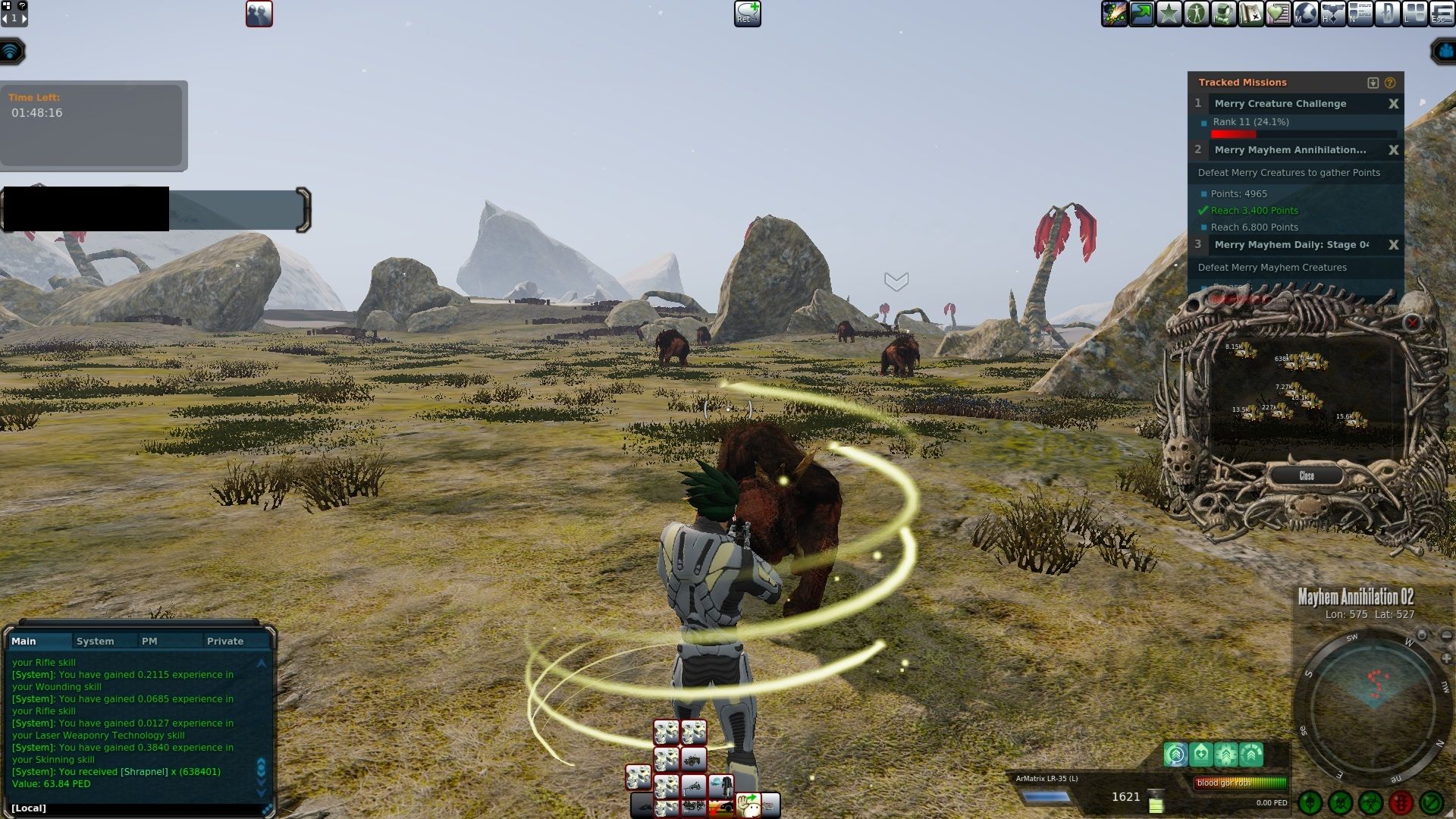 A decent twenty minutes after that I ended up getting my final global for this session. A little 63.84 PED. This one came rather unexpectedly as I was starting to have a decent run. I still ended up coming out slightly at a loss from this grinding session. It was however one of my lower losses in terms of TT (trade terminal) returns. The game would not be so kind to me moving forward.

I thought that was going to be it for all the excitement I was going to get out of this instance. It was quite a winning one with all the points I had racked up. I however ended up getting a couple of 25s, a single 50, and a whole lot of 5 and 10-point kill till it was time to call it a night. I exited the instance back to the area I tend to AFK at. I managed in over 5 hours to rack up 2,720 points, and 3 globals, and I even reached rank 49 in Laser Sniper (Hit) profession. I have yet to loot any of the special Unreal tokens that are dropping from the event or anything else noteworthy.