This is not the first time Ubisoft went back on their words or even just flat-out nuked a game. You would think a single-player game would have zero reasons to no longer be playable. The dirty truth of the matter is we live in a world of DRM (digital rights management) tactics and online services. Many of Ubisoft’s single-player games require them to spend money on a server and updating which they have deemed not to be worth the costs anymore. Screenshot from Steam Store
This resulted in a few games from different publishers to my understanding having to temporarily halt sales on Steam with many still not back up for sale. However, we can see despite them no longer selling Assassin’s Creed Liberation HD. That they have a bunch of other games for sale on Steam at this time. So that appears to not be the issue.

There is a game from 2018 currently on sale for 80% off and it’s important to note the age of that game and how badly they are trying to offload it. Like they know something will be happening next year one could only assume. Pure speculation on my point at this time.

While that might sound like they are trying to build some kind of experience to transcend the game itself. There is just one tiny issue. They usually require an internet connection for DLCs and extra services. In some cases, even their games become unplayable if their servers are having issues.

Ubisoft for a while now has been gutting its online services in a cost-cutting move. Back a while ago when I wanted to play Might & Magic X – Legacy the game was unplayable. They had removed backend server support for online services to that game and many others to save money.

With resulted in me not even being able to play the game. For those that had the game downloaded, they could still somewhat play. However, DLCs and other things with required checking that you own ownership of them due to DRM were having issues. That also broke the game and required gamers to have to make their own “patch” to fix it.

Many months after the fiasco with Might & Magic X – Legacy, Ubisoft did get it back up and running. Many games were affected by Ubisoft cutting the cord at that time. This is however not the last instance they would be doing this to gamers.

On Ubisoft’s website is a recent list of games that are losing their online services on September 1st, 2022. This recent round of cuts will be impacting 15 games across many different platforms from PC, Xbox, PlayStation, and WII.

How badly those games will be affected depends on what kind of content that game had. Assassin's Creed Liberation HD which is what many are focused on right now is losing full access to any DLCs it had, online features, and the ability to link your account to the game according to their own data sheet.

Assassin's Creed Liberation HD is however not the only game being so badly affected. You have games like Prince of Persia: The Forgotten Sands, Silent Hunter 5, Far Cry 3 (2012 Release), Driver San Francisco, and other older Assassin’ Creed games.

While some of the games on their list might still be playable after the date. If it’s anything we have learned from Might & Magic X – Legacy is that unexpected issues can arise when they cut online service. Ubisoft has a track record of taking its time fixing things. After all, when they don’t see enough game sales it’s what put these games on the chopping block in the first place.

According to Steamdb Info a website that keeps track of all kinds of metrics on Steam games. Assassin’s Creed Liberation HD was at a 75% discount for the Summer sale 2022 event. While some other sites I’ve tried to cross-reference this data point on do not show that. Those other sites seem to have missing data on a lot of games past late 2020 that have low volume. 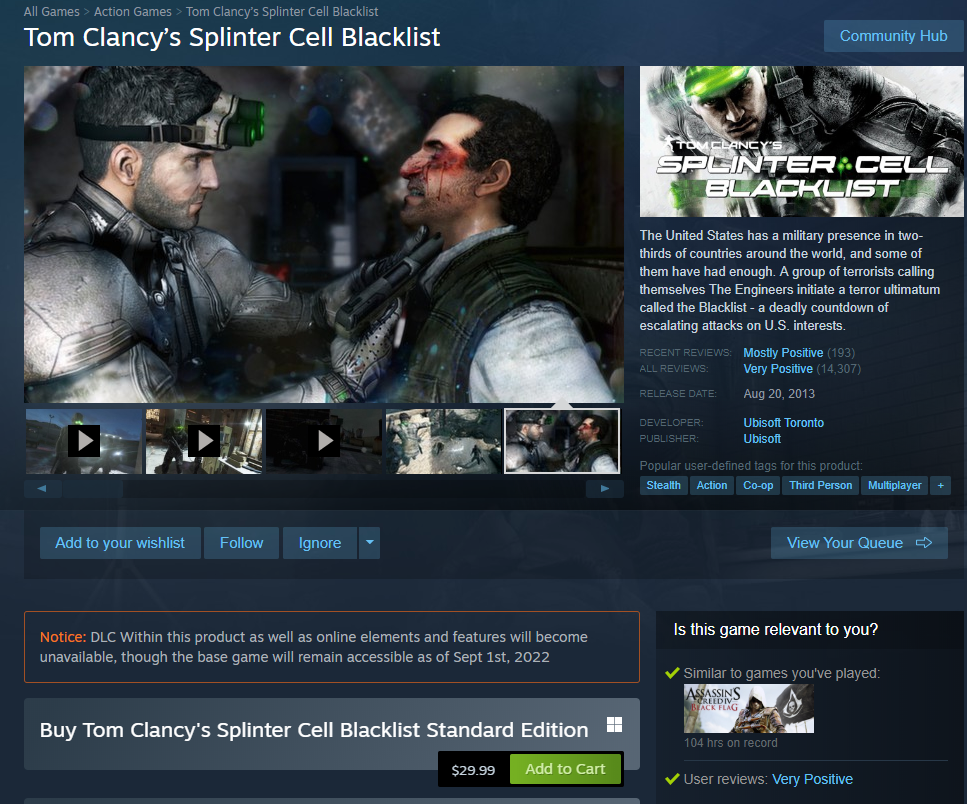 Screenshot from the Steam Store
The crazy thing is not all of the games on Ubisoft’s list have been pulled from the Steam store. There are in fact at the time of writing this post Tom Clancy's Splinter Cell Blacklist Standard Edition and Deluxe among others. They just have a warning that “DLC and online elements” will be unavailable. I can only hope some kind of DRM issue won’t pop up in September.

At least online-only titles like Space Junkies I’m not seeing on the Steam store. That game itself will no longer be playable according to Ubisoft’s notes on their website. Interestingly enough SteamDB shows it going on a 75% discount during the Summer Sale 2022 event as well. How disgusting if this data is correct but I did not see that sale with my own eyes.

Screenshot from Amazon
While you would think all this would be the worst of it. It however is not. As of Monday, July 11 2022 you can still buy many games that have been pulled from the Steam website elsewhere. Amazon has Assassin's Creed Liberation HD for sale with no warning that online services are being removed. Yet down in the system requirements they clearly state that Uplay is required. That is going to be another issue.

Even Space Junkies will not be playable at all due to it being an online game according to Ubisoft’s post. It’s still for sale on amazon. At the very least in that instance, it appears to not be sold by Ubisoft but by a third party. Many third-party sites are trying to dump all the games that are going to be affected by the changes being made in September 2022.

Screenshot from Walmart
I wish I could say this was a one-off but I can’t. While some of the tiles that are going to be affected appear to no longer be on a bunch of different sites and removed from Steam. I found Anno 2070 by Ubisoft up for sale at the time of writing this on GameStop without any warnings. At least the Walmart listing for it is showing “out of stock.” That is however not a saving grace for Walmart because they still have Space Junkies for sale online granted by a third party. It’s like their retail partners are not up to speed on what is going on.

Perhaps it’s not that big of a deal. Many of those games are still being sold I have no idea if they even have DLCs. They also might have had very limited if any online services. All expect at the very least the online multiplayer game Space Junkies with so many sites still listing it as for sale this late into the day.

All of this is not even the most bizarre twist of it all. If you bought the release of Far Cry 3 according to Ubisoft you are losing services. If however, you bought the remastered version? Which I don’t even see for sale you are fine. Are they at least giving anyone that owns Far Cry 3 a free upgrade to whatever this remaster version is? Well in their Steam post there is no mention of it. They simply declare you can still play the main campaign offline. I’m not even sure what they are talking about in regards to the special notes they have about the remastered version.

Ubisoft seems to have botched it again. Retail stores still have games that won’t even be playable listed for sale. Along with games getting services removed without any disclosure on many online sites. Games that were apparently up for sale on discount recently getting yanked off the Steam store and will be gutted of services in September.

While I wish I could say I expected better of Ubisoft the matter of fact is I don’t. My own experience of Might & Magic X – Legacy being unplayable quite a while ago when they gutted online services. It was just a matter of time before they brought back that chopping block for other titles.

Which makes me ask the question. How far in advance did Ubisoft know they were going to be cutting online services to all these games? Did they still put them up for sale fully knowing this? Did they mislead gamers and possibly break some consumer laws in Europe? I have no idea.

My advance is to be careful if you do end up buying any Ubisoft games. If they start deep discounting a game out of nowhere that will be a giant red flag to me. You now need to check if you are buying from other sites and if that game will even be around as some sites are still lacking proper warnings.

While I do hope in September when Ubisoft pulls DLCs and online services to 15 different games that there are not any unexpected issues. That is not how it tends to go and I would not be shocked if some DRM ends up biting them in the behind.

If Ubisoft is lucky the modding community will come along and fix issues and maybe even get things working as they used to if things go sideways. However, with how many gaming companies and publishers tend to treat the modding community poorly. I would not be shocked if they just sit back and watch the fire.

As far as any possible remedies for anyone that has recently purchased one of the games that are losing services. It’s best to try and get a refund as quickly as possible. You should not be left holding the bag on a game that decided to cut off services, DLCs, and other things simply because the developer was not getting the kind of revenue off old games that they desired.

I am rather tired of how Ubisoft treats its customers. I won’t be buying their latest game like I was planning. I’m also putting any content I have on their games on the shelf for the time being. Perhaps as the company, they can still redeem themselves. If not I have a feeling some games they spent a boat load of money on will go down in flames as gamers stay away.

Screenshots were taken and content was written by @Enjar. The screenshot cover is from the Steam store.