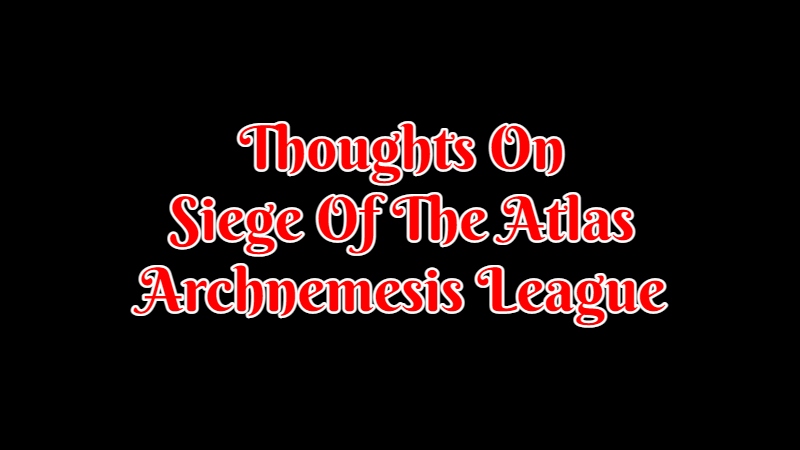 Just when I was getting back into the swing of things only recently coming back to Path of Exile again as of Scourge league the game developers tilted the game sideways. One of the amazing attributes of Path of Exile with how much change in a given year can also be a bit of a dang its moment. Like a lot of mechanics, I’ve learned or been reacquainted with are going to be no more or changes in a massive way with the up and coming expansion.

Unlike Scourge league where I was thrilled about it at first. I’m willing to admit the league portion of this next update leaving me feeling a bit meh. The other part of the update is called Siege of the Atlas I can only say I can’t believe Path of Exile went full-on Path of Exile with the changes.

As anyone who has seriously played Path of Exile you know, it’s all about mapping in the Atlas. On one hand, they seem to be trying to make things a bit simpler in this aspect, and on the other, they are going to smash your brains out with a hammer.

They are doing away with how the old Atlas system worked in quite a few aspects. Instead of having different regions where you are working from the outside inward. You seem to be working inward out into the insanity that will pursue.

The doing away with regions on the Atlas which I’m both for removal off I can understand that will kill some mechanics players were taking advantage of. In the old system, each region would have its passive skill tree that would only affect only that region. Allowing regions to be tailored to different kinds of farming activity like for Sulphite for Delve or contracts for Heists among a lot of other things.

Each region use to have four Watchstones that allowed you to have different regions set up in different tiers of map drops. Affecting what you could get as you try and target a farm while in other regions a certain tier of a map.

With how many Watchstones we used to have if you rolled a Sextant with modifiers and you wanted to save that was no big issue. You could just un-socket that Watch Stone and borrow one from another region. I liked being able to save the better modifiers when I wanted to use them. At least under the new system, they are adding an item into the game called a Charged Compass that we can store Sextant modifiers on.

While I usually did not use Sextants on the Atlas till I was doing end-game farming for the league I am a bit sad to see them remove the lower tier ones. I always considered those lower-tier Sextants to be budget-friendly. You could keep rerolling them till you landed a more preferred modifier on a map like added packs of monsters.

There are also a bunch of other things that however are all now gone. Including from what I can tell a lot of different farming routes many players have become accustomed to running. As it seems what used to be important on the Atlas for farming is now changes with the lack of regions. While regions did a lot they also made the game complex. Removing it at the surface seems like it would make things easier.

There is just one tricky little thing the Atlas passives each region had. While they did limit what maps you were here stuck running to farm for what you had them set upon. It turns out they were not as complex as they could have been. Oh, no, Path of Exile went full-on Path of Exile as they are not giving up on those still being a thing.

While a lot of details are still coming out and will not be known till release. One thing is for certain if you are like me and viewed the passive skill tree system as like a map to the universe. Well, Path of Exile now has another one of those. This time however it’s with Atlas passives.

As a player on one hand I enjoy choice and having more freedom to choose and make mistakes. On the other hand, dealing with a new passive skill tree for the entire Atlas that has 600 passives to work out, understand, and formulate into a new plan. Well $%)##. That almost makes me wish for the old region and region-locked skill trees to be back.

Siege of the Atlas seems to also be expanding on the kinds of influence that can be taking shape on the Atlas maps themselves. With the introduction of two new end game bosses Searing Exarch and Easter of Worlds and their lower lings. As you fight towards them you can toggle like the Maven button on the Atlas which one you want to have on the map.

Up until the last league I was never into building a character that could kill bosses in Path of Exile. I always liked having characters that could clear Atlas maps at a decent rate and had my fun that way. With how heavy of a focus Siege of the Atlas is on getting to the new end game bosses. It looks like I’ll be more focused on making a boss-killing character.

As far as the league is considered they are calling it Archnemesis. You build a rare monster to fight by collecting different modifiers and combining them at petrified statutes. In maps, you can do this four times with each time having the ability to add one further modifier to the fight.

Building your fight somewhat sounds like Metamorph league that I was not around for. I get it that it’s a bit different. Instead of putting all the parts in at once and fighting one monster on a map. You now get four fights throughout a map. You are also no longer being restricted to body part placement like in Metamorph since they are just modifiers on an item you can use in Archnemesis.

While there could be some cool things going on with Archnemesis it just seems quite basic. In the Path of Exile development cycle if you get a really big expansion like Siege of the Atlas you tend to get a more basic league that comes with it. It’s understandable as they only have so many resources for development. It just seems like we kind of did something like this already now with a twist on it.

What we don’t know yet are all the finer details and that tends to be where Path of Exile shines. They of course have put out a massive list of skills they are “balancing.” While it seems like many things are getting buffed. Some things are also getting strange nerfs that seem to be killing off niche builds.

This will be a league where I’m more playing to see all the changes Siege of the Atlas brings than I am in seeing what the Archnemesis league is about. At least the league checks off my list one thing I like to see regarding them and that appears to be the ability to just skip over the league mechanic if I don’t feel like running it.

As far as what I’m going to play it seems I’ll be waiting for more information to come out. Toxic Rain is getting a slight nerf. This made me hopeful that minions would get something worth playing in this league but that does not appear to be a thing either. Seems like using a bow will be how this league goes.

The content was written by @Enjar about the up-and-coming league and expansion in Path of Exile.