I ran one last round of Tower maps before calling it a season this league. While it was fun to get up to this level of gameplay. it also got boring with how many Tower maps I’ve now run. While there is still a month or so remaining. I doubt I’ll be returning to do anything else. 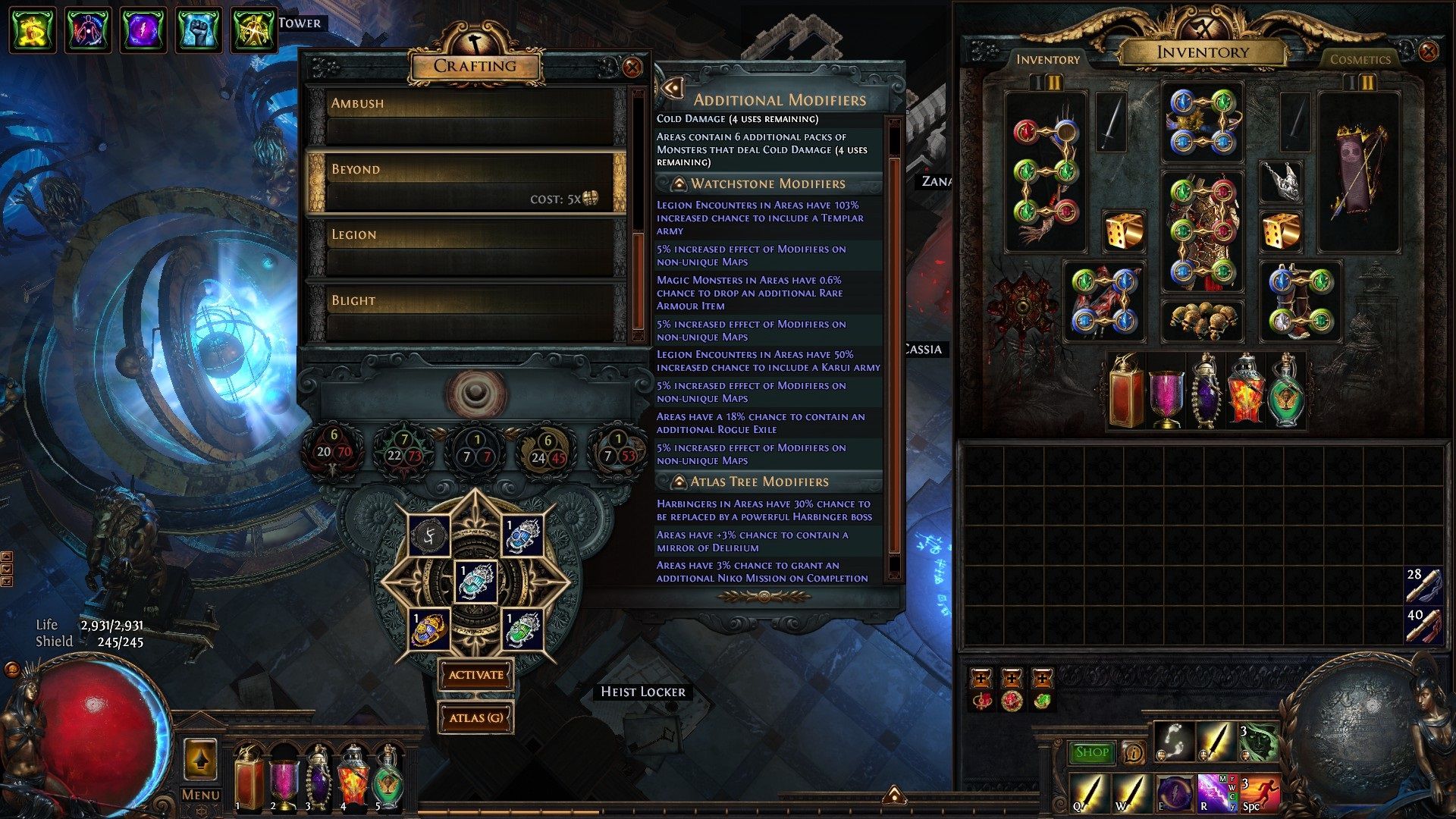 Most of my setup is the same as my last runs posted on the day 50. The biggest change was to my Watchstones. This took a little longer than I would have liked acquiring four of them.

Path of Exile is one of those games where if supply is low enough it seems a few players will step in and control the market if there is enough demand for it. I wanted to increase my 2% effect of modifiers on maps to 4% so I would also pick up a 1% bonus from the Atlas passive tree I have selected. The market is however driving an item that goes for 3 Exalts or less as high as 9 Exalts. I had to keep my eyes peeled and have the Exalts ready to go to get fair listing quickly.

I even attempted to roll my own 4% Watchstones for Valdo’s Rest. The best I could ever get was 2%. Which I was running for a while. I however wanted much better. Gaining such a bonus on a bunch of modifiers could take things to the next level for my farming.

If I was going to go all out I would try and acquire a 5th 4% Watchstones. That way when I roll on my sextant's increased quantity and rarity for undefined maps I would put that Watchstones aside and replace it with another 4% instead of 2%. Then all I would have to do is wait till I rolled take no reflection damage on another sextant.

Undefined maps from vaaling them are supposed to be if you luck out some of the best maps you can run. Since you don’t know what they rolled since you can’t see the modifiers they are also a huge risk. While I did roll a few I never lucked out in getting the sextant rolls I needed to utilize them to their full potential. While I was hoping to break 200% increased quantity during one of my last twenty runs. I almost got there but not quite. I do know it is possible. Perhaps next time or if I return in a few weeks right before things end just to spam my last remaining maps to see if I can make it happen.

This round ended up being unlucky in terms of the drops I was aiming for. I ended up getting 3 The Nurse divination cards total and only 1 Exalt drop. Since my average cost was only 52 Chaos per Tower map along with everything else I got I took a nice profit. With a nice boost in quantity, however, I ended filling up almost 6 stash tabs worth of loot. I now have over 20 Exalts worth of gear and other items I’m trying to sell. I think around 10 Exalts of it was just from these runs alone. It however feels like many players like myself are kind of done with this league. Sales are starting to come in slower and slower. 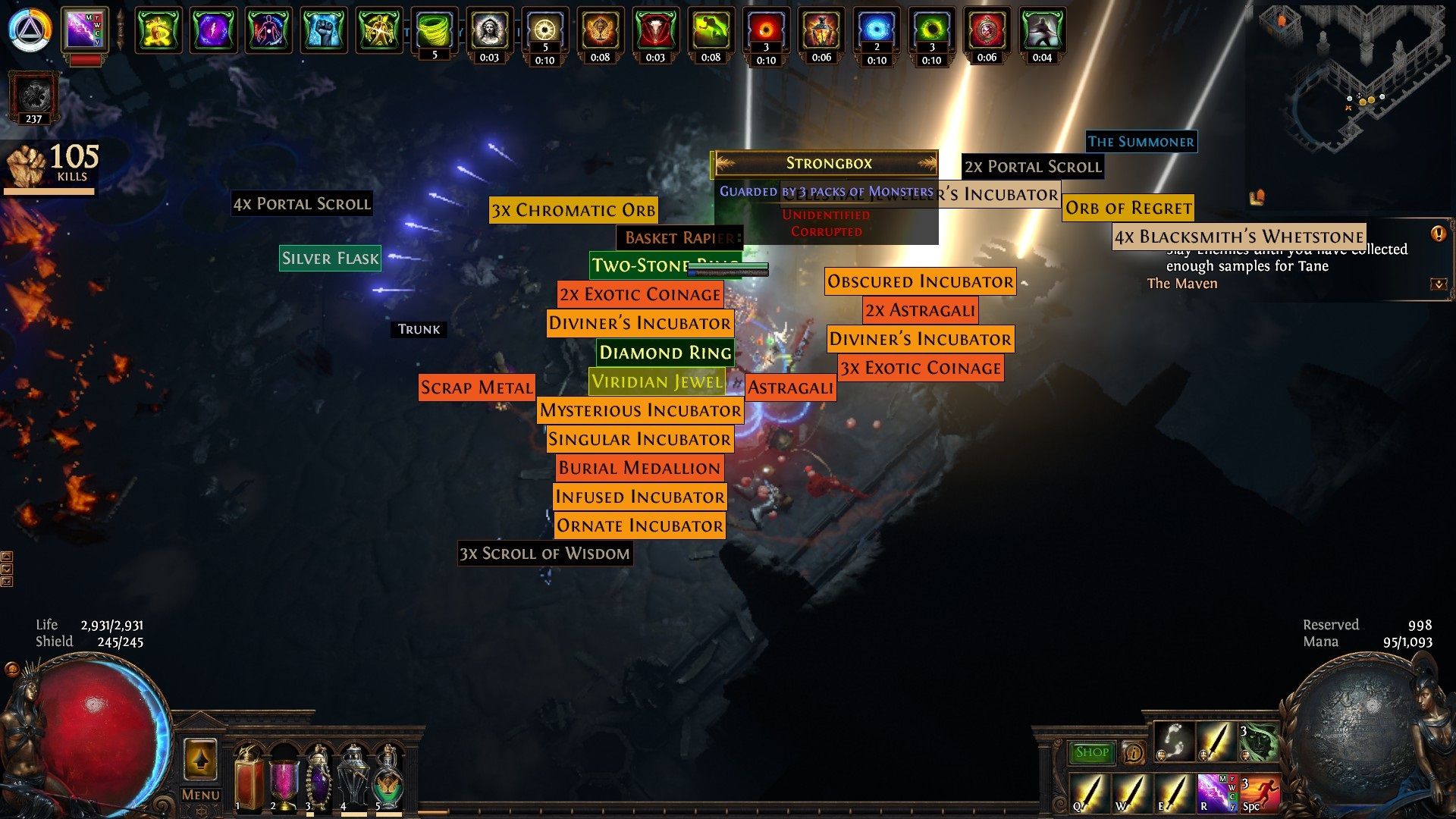 While I had 15 of them many of them were total junk or required my champion to run them. As such there were 10 in total that I ran on my ranger. Two of them ended up being quite nice. The other ones I was hoping to get lucky which did not happen.

My best one by far was yet again another Expedition currency drop map. These have been my highest earners this entire season. Any time I land them on a map I’m leveling up in the blood crucible I’ll take it to level 10 unless some nasty modifiers start being applied when I level it up.

My next best had Scourge League currency drops. It was however quite lackluster. All but the top currency have lost most of their value. I did not luck out on getting anything amazing. A large chunk of it I was even not able to sell.

Beyond that, I had a few that had a slight chance at dropping something amazing. None of them did which is why I ran them as cheap as possible. Nothing special was added. Just sextants rolled for added packs to help get into Nightmare.

During one of them I did get a Nurse drop. Even running these without spending a lot it’s nice to see I can still get one to drop on a magic find character without going all out or running an insane amount of Tower maps.

Just the two amazing Scourge maps I ran alone would have covered all the maps I ran for the day in costs. It was almost like I was running these maps to try and max out the best I could good the good modifiers on my Scourge maps and getting Exalts or Nurse card drops along the way were just bonuses. Between my 20 normal Tower runs and 10 Scourge Tower runs I pulled in almost 29 Exalts worth of loot not including armorer and weapons. Netting me a cool 22 Exalts in profit if I found sellers for everything not including the gear. If all the gear sold that could be an easy 10 Exalts on top of that.

Scourge League has been one of the more successful leagues for myself I’ve partaken in since I started playing Path of Exile. It is also quite a time-consuming affair to try and keep up on daily. Perhaps I’ll jump into the next league whenever that is in a month or two. I might also take a bit of a break from the game again. Only time will tell.

At least I’m not ending the league with an empty currency stash. If I wanted I could try and sell my three tabs full of gear, upscale all my currency, and have a massive map sale. However, I have not played in the standard league for years now. So this stuff will just get added to my pile over there once the league ends in a month or so.

There are around 80 Exalts worth of stuff in my stash tabs alone. Add on top of that maybe 140 Exalts worth of gear on my characters. It has been the league of insanity for me. I’ve surpassed the value of everything I have collected over the years many times over in a single league. Along with running content I never have before.