Pure insanity the last two days have been. I ended up breaking my session up into two different parts while I continue reinvesting into pricier and better things. While there is such a thing as diminishing returns and if you overspend it’s hard to turn a profit. I still have some things I need to acquire. Even without them, it’s been nuts, to say the least.

Just how insane have things been these past two days? That was my best per hour according to Exilence Next. While that was not something I sustained during all my runs. It was fun seeing a couple back to back maps skyrocket the amount of chaos worth of items I was getting. I ended up running a bunch of Tower 6 maps while I had some before dropping down to tier 3. Throughout these two days, I’ve dropped a few exalts on some new Watchstones. I’ve also increased my average run cost per map.

As far as the Watchstones I’ve been buying until I’m able to secure the two I’m missing I won’t be saying anything more about them. The prices on them have started to skyrocket. Which makes me believe I’m not the only one on the hunt for them. I still need to acquire more Exalts and hopefully not overpay for what I need.

Since I’m using Gilded Cartography I’ve hit a point where I’m now overflowing with Tower maps more notability tier 3. As such I’ve taken the extra risk of Vaaling all maps moving forward that I plan on running. About half my runs I did this for the map this time around.

The risk with Vaaling a map is it corrupts it. It could upgrade it to another tier higher map or add modifiers on it that make it un-runnable. Between the Vaal itself and bricking maps it will add to the total cost. Thankfully these lower maps are only a few Chaos each.

On top of the standard chiseling, alchemy, and rerolling the maps for higher value or to remove modifiers I’m trying to avoid. I ran these maps mostly with Polished harbinger, Elder, and Divination scarabs. With the higher Gilded scarab for Cartography for map drops that I might be replacing till I’m low again on maps on future days.

I’m also Atlas crafting Beyond on the maps. Along with using Prime Sextants for rolling extra monster packs on the Watchstones, I’m using. It’s tempting to play around with some Awakened Sextant since I have a stack of them. That will increase my costs by a lot and will have to be for another day.

With all of this added up my average cost per map run increased from 35 Chaos to 51.5 Chaos. Since this was done over two days with some slight changes. I acquired the needed materials and two different days resulting in slightly different prices per day. This was all done throughout 32 maps for a total cost of 1,648 Chaos or 10.91 Exalts.

Hopefully, in the future, I’ll have a big enough bankroll to mass buy everything I need for 30 to 50+ Tower map runs all at once. Since that was not the case it was broken up into two different runs. A fair amount of time waiting around for things to sell. 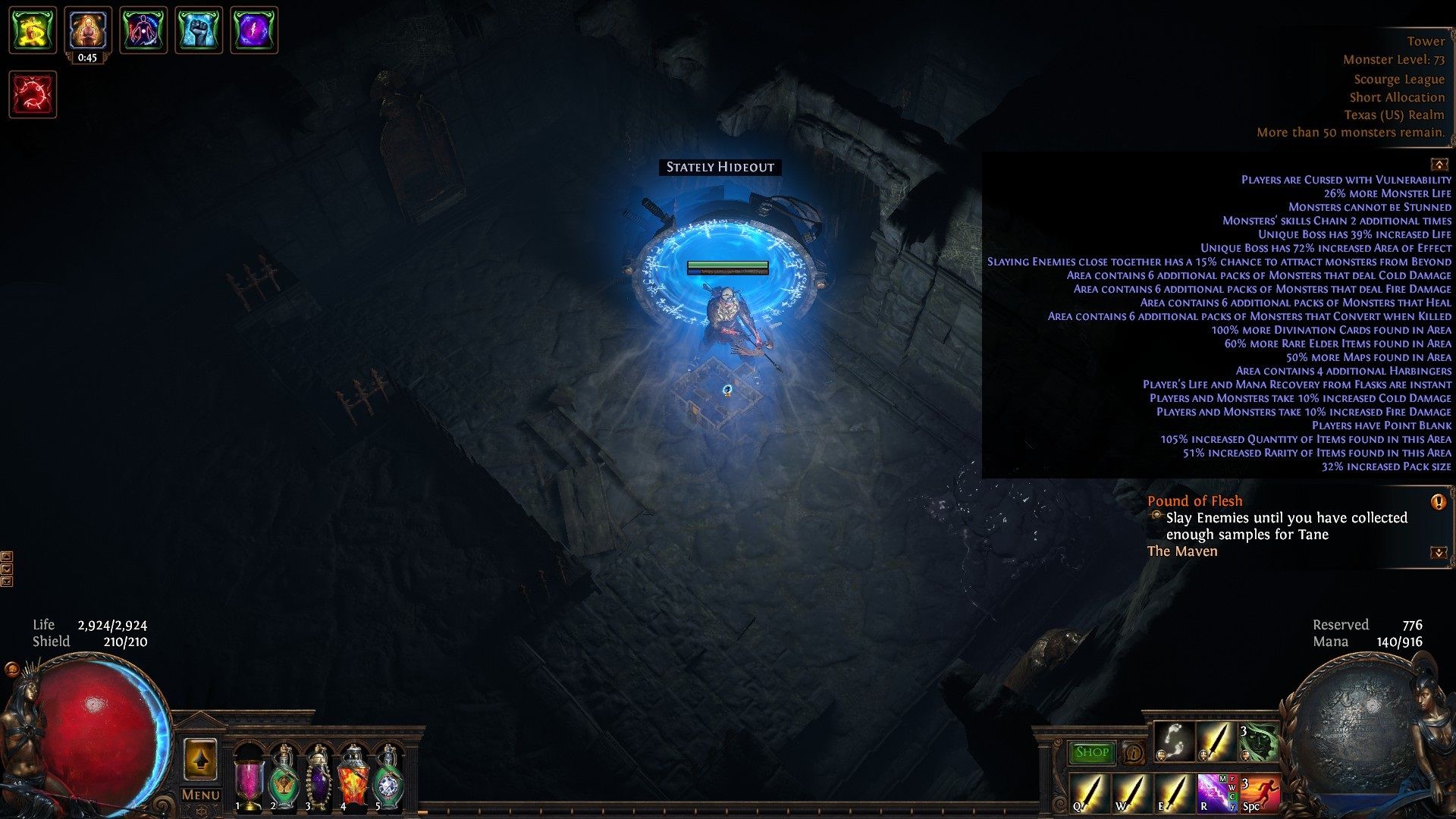 Things are a little hazy over the past two days as I’ve been having to do these runs mostly late at night. This first run was not the most insane tower run I had. They were however better than many of my runs over the past few days.

You can start to see from all the modifiers on the maps that things are starting to get rather insane. The screenshot above was by no means one of my better maps. I, later on, made some changes and purchases that increase things even further along.

With that much quantity and rarity on a map, it’s hard to not stop and open every single normal chest just because. I was having Elder items and even tower maps flowing out of the non-combat chests. I hope one day to get something massive. This time around just a few extra Chaos here or there. I don’t know why but even after all the Exalts I’ve looted this league I just love the thrill of seeing one of these drops. The only thing more exciting than getting an Exalt drop early enough on a map Tower run is wondering if something else insane could drop. While It’s not always been the case more than once now I’ll have a run that drops an Exalt and a Nurse. This happened to be yet again one of those times. I did end up getting another Exalt and Nurse to drop in later Tower runs from this batch. I have so many maps now some of my lower tier map tabs are full and I’m trying to run discount sales to sell things in bulk. While I did not keep track of how much of my total value of the loot was from map drops. It is quite a lot. I need to spend some time readjusting their prices and moving inventory.

What is not included in the Elder and gear I ended up looting. I’d cheery pick mostly the small items that I knew could still have value. I would then later on go and price checks them and list them. I’ve had many 200 Chaos worth of sales from such items.

Inventory space and even more so premium inventory space for listing items for sale has become quite the struggle. I got to the point during the day when where I was ready to buy more stash tabs during the next sale. I just have so much loot these days. This part of the journey I started to Vaal just about all of my Tower maps. There were also some modifiers I was focusing more heavily on than others just to test some things out. While I’m not running enough maps for a decent sample size. It seemed to have paid off some of the changes I’ve made.

I also broke down and replaced my helm with another rare one. While I wanted to farm my Lighting arrow hits 2 additional enemies I was just not having the luck. What I did have were Exalts to spend and now I clear maps even faster.

On the tier 3 maps, I also replaced one of my flasks with a life one. There have just been far too many instances where if I could heal myself in any way I would not have died. I don’t even have any life regen which makes things quite dicey in many situations. Something I’m hoping to resolve once I level up some more. This batch of runs started right away with an Exalt drop. I love it when it’s that way. It helps me get a little ahead of my average 51 Chaos per map run cost. Which at least for me makes it more fun as I don’t feel like I’m about to get hosed and end up broke again. 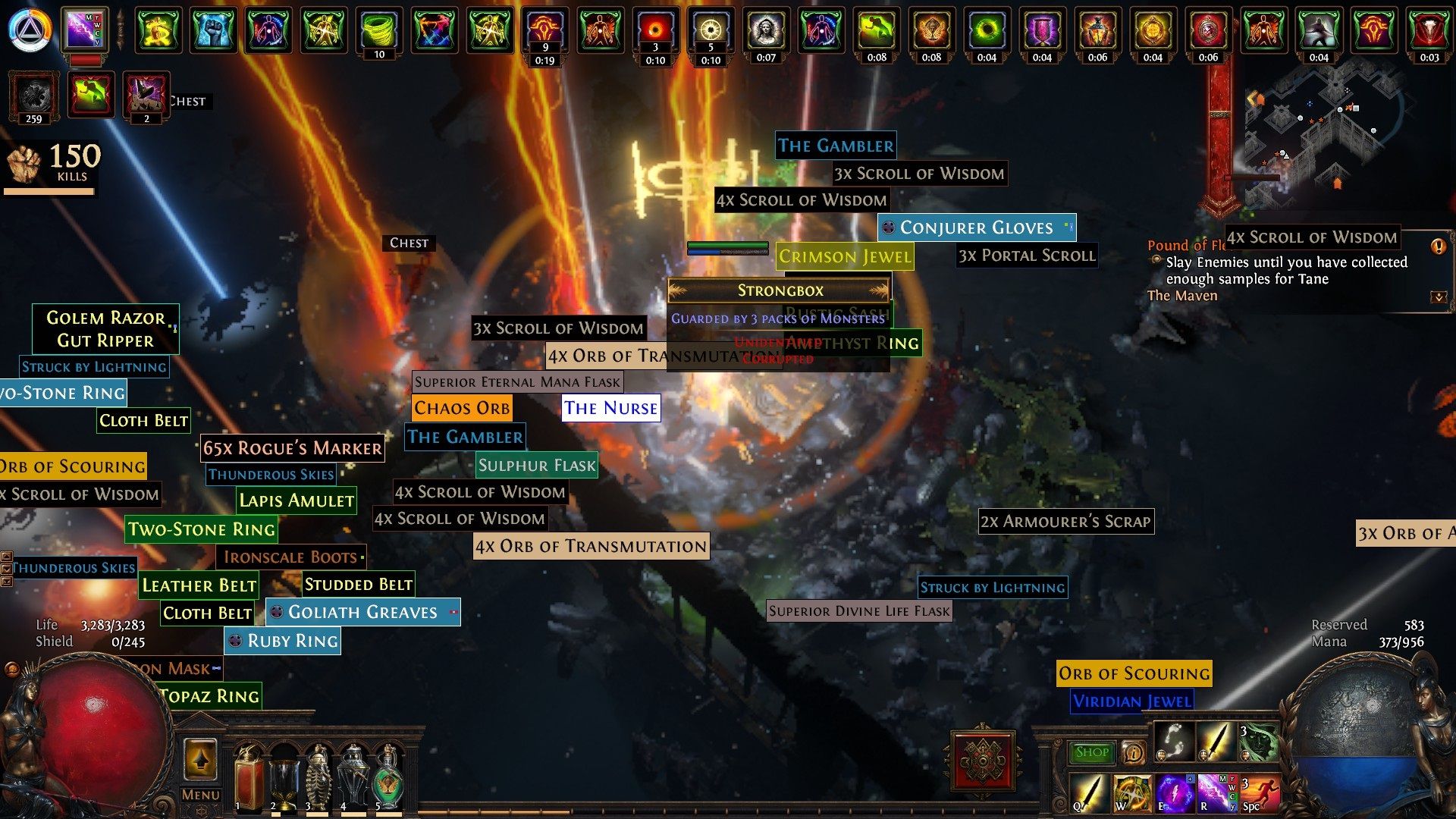 Not long after I got a Nurse drop. A map run later and another Nurse drop. I think this was part of the run where I hit 807 Chaos worth of loot in a single hour. 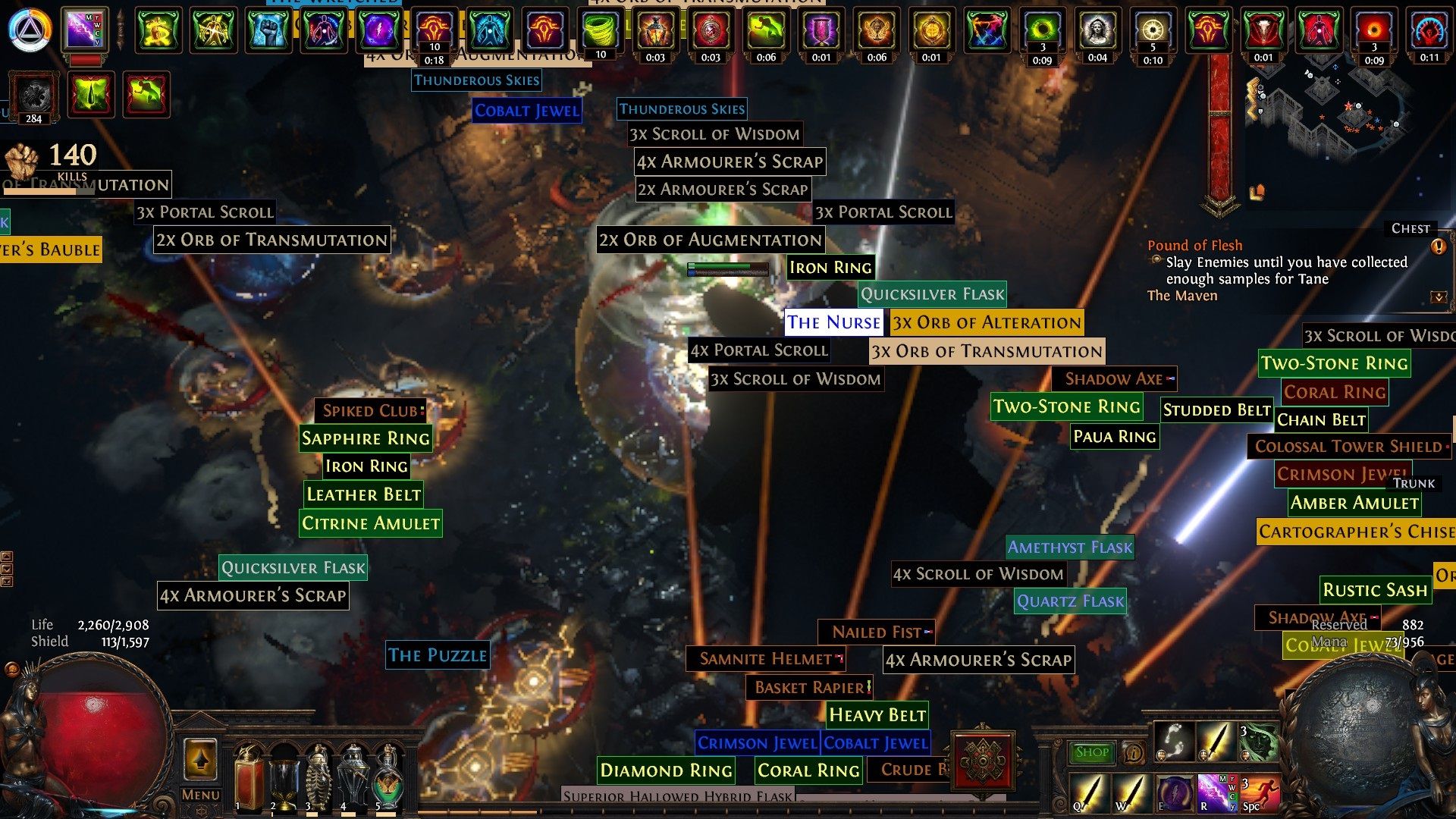 How about another Nurse drop? Why not Path of Exile tells me There came a point where I went to drop things off and my inventory was full. All of my stash tabs were full. While I do love getting these screenshots of all the loot it takes up a lot of space. I ended up having enough space to start removing all the Heist Contracts I looted and putting them into their proper storage. In this second batch of runs, I ended up getting 4 Nurses cards and 2 Exalts. It was quite the crazy run. 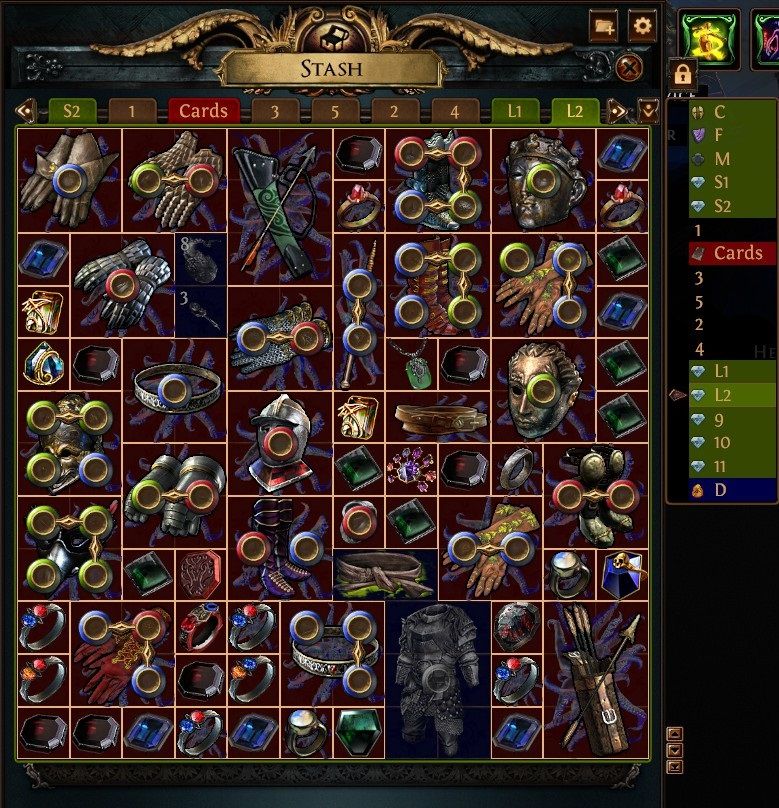 Path of Exile is also running a stash tab sale over the weekend. Since prices seem to be around what they were during the last sale I thought I better not miss out on this one. I needed the space. I now have dedicated tabs for price-checking items. A few for listing items for sale. This is going to make things much easier on me. Not to mention I won’t have to discount things quickly over 24 hours to try and move inventory out of a single sales tab anymore. 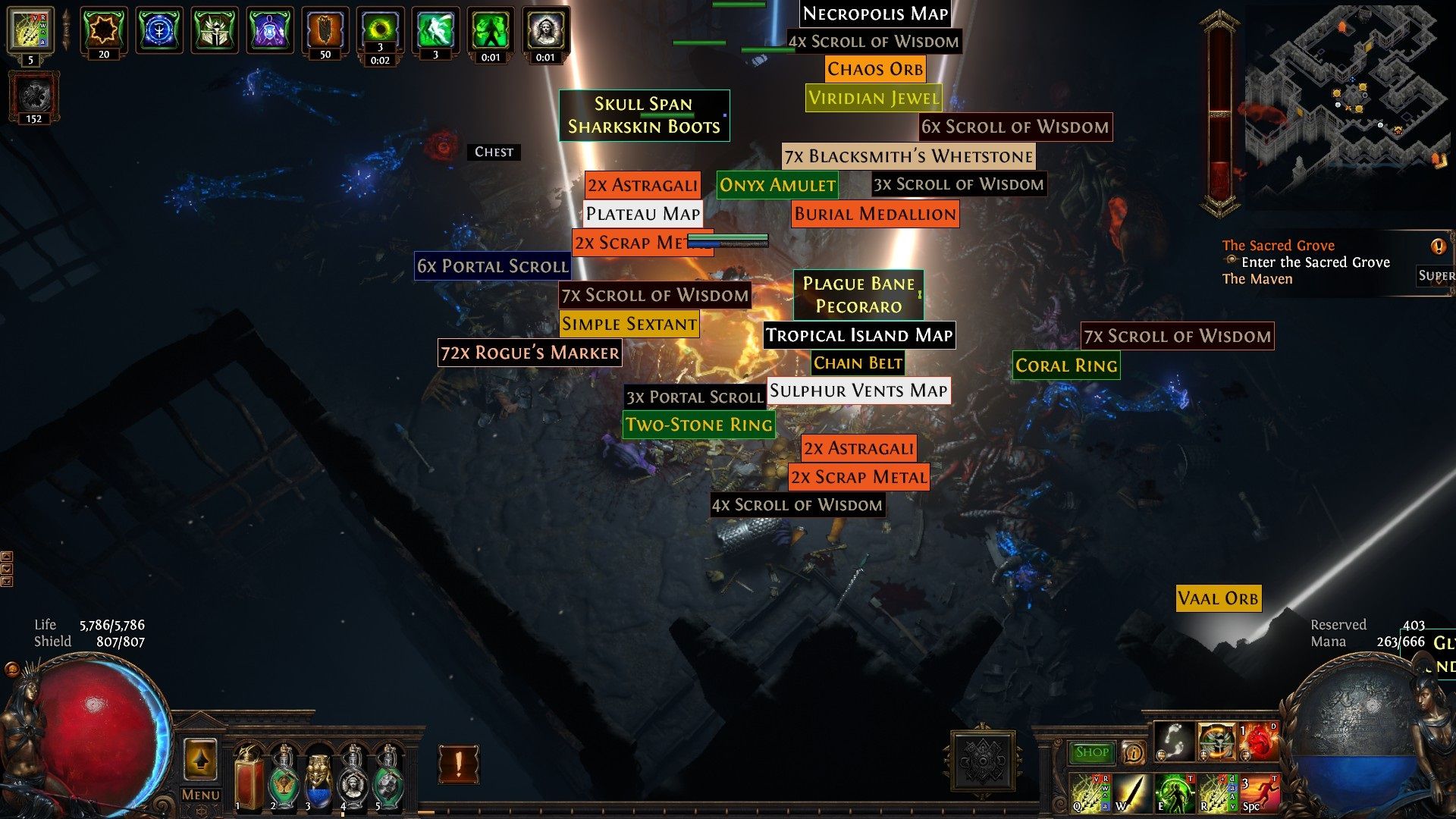 I also ran a bunch of Scourge Tower maps I had from leveling up a few. If they were decent in what could drop and it was not too much of a pain for Nightmare to be triggered I would run them like my normal Tower maps. If my Champion had to run them or they were not that great I ran them without anything extra.

The best ones so far hands down have always been the ones where I have a high roll of expedition drops. Unless they are really hard to run, I’ve bricked the map, or something else goes wrong they can bring in a decent amount.

I’ve gotten to a point now if I have not rolled something decent while these Scourge Tower maps are leveling up from me killing monsters in Nightmare I’ll swap them out for new ones. I have also been more careful to swap them out if something I don’t want lands on them if they have decent drops. I also had some that were total trash. I ran them anyway since there is always a slight chance for say a gem skill one to drop something of high value. That of course did not happen. It was rather interesting seeing the ground littered in gem skills though.

In total, I had around 1,108 Chaos worth of loot out an unknown amount I ran. Getting an extra 7 Exalts for just a little more effort than what I was already doing is quite nice. It’s now the weekend and I have so much to price and sell. During my 32 map runs, I looted 6 Nurse Divination cards and 4 Exalts among a lot of other things. There was around 4,378 Chaos worth of loot including my Scourge runs amounting to around 29 Exalts. I spent 10.3 Exalts on running the maps. There are also another 10 Exalts or so in gear, which I’ve not included in my totals since I don’t know if or for how much they will end up selling for.

While it would be nice if I was flush with currency. Between all the Exalts spent on running the maps. Buying a new helm and Watchstones. Well, I got to wait for more sales before loading up and doing this all again. I also need more Exalts spend on Watchstones which I’m hoping to get over the weekend.

At least I’m a bit more organized. Have a lot more storage space to handle the insane volume of loot I’ve been getting. I’m also no longer at a point where I question spending over 100 Exalts to make a Headhunter magic find ranger.

These last two days have just been insane. For all I know it was just a fluke. Things could also get better once I finish getting what I need. I might even up the stakes even further and increase my average cost per map run. Only time will tell what I end up doing.