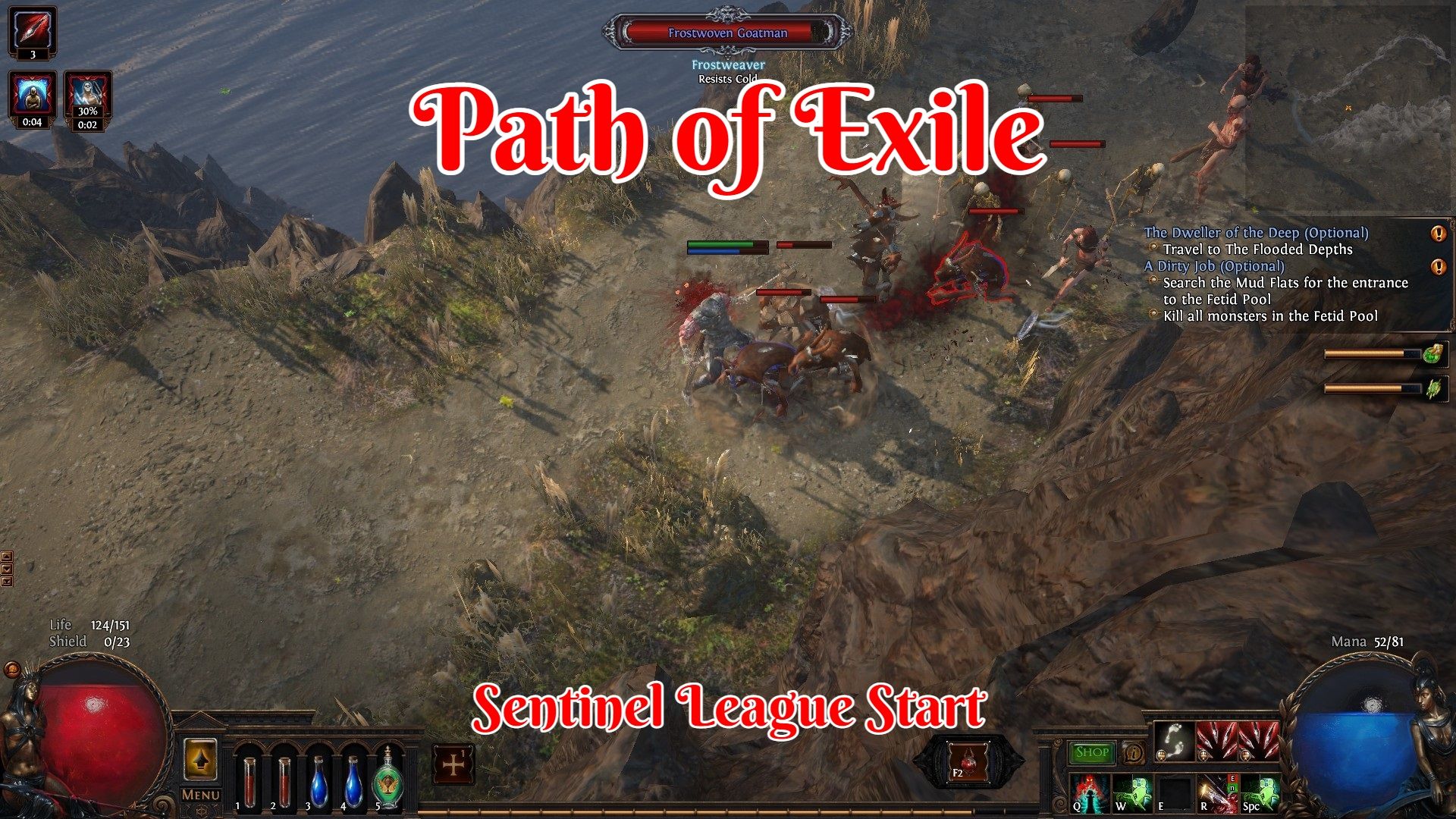 It’s that time again for the thrill of league start in Path of Exile. This time around I’m changing things up a bit. I’m going to be taking my time a little more and not pushing myself as hard as I have in the past. I don’t have any real goals going into this.

I still have a bit of a mixed feeling about this league. The thing that keeps me coming back to Path of Exile over the years is just how game-changing a single league can be. With this league and the past one, they had other focus and improvements for the game. The league felt like it came second.

This was quite felt leading up to this league as well. The developers behind the game were all talking about small changes to this or that and not so much about the league itself. Such as moving buttons from past league mechanics in the UI to “better” positions. They seem to be more focused on UI than quite a lot of other things.

It was tempting to just skip over this league and hope the next one is something more in line with what I’m looking to play. I still however wanted to give it a shot. For all I know I’m wrong and I end up loving Sentinel.

This however does mean I’m changing things up a bit. I won’t be pushing myself as hard as I tend to for a league start. I’m not going to be grinding all night long trying to beat my personal best time for making it into maps.

While my internet is not great I’m glad it was quick enough to get the last hour patch updated and finished in time. There had been some patches leading up to this. I was hoping they would have been the bulk of the updates.

I do feel for the players who have much slower internet or are not around to get it patched in time. Their first day of league start might be spent waiting on the patch to download and falling asleep before it finishes.

I don’t miss those kinds of days in my early gaming life. I can recall them quite well trying to stay up for a game to patch. Then being tired once it finished that I’d end up just going to bed. Then I’d wake up the next day tired and not getting the best start of the day to enjoy whatever game it was. I also was not the quickest to patch or do some of the other updating once you launch the game either. I ended up landing in a queue at 25k. If this was any other game you would feel doomed to not get in for hours. Thankfully once the league started I think I only waited about 35 minutes before I got in. Unlike some league starts where I did not know what I wanted to start with. I had decided hours prior that I would give explosive arrow champion another run. I have played it before and enjoyed it. There have been quite a few improvements to such a build since then including some new items that now drop.

I’m hoping a lot of the things I hated about the explosive arrow in the past are no longer a huge issue. I also know enough that I feel a bit more confident playing it. There are some things I knew I can get away with and more importantly without if needed to still progress at a decent rate in the game.

The truth of the matter is I usually hate the leveling process that you have to get to get into maps. I’ve done it so many times I’ve grown quite sick and tired of it. I decided this time around instead of trying to rush it I see if I can enjoy it again. 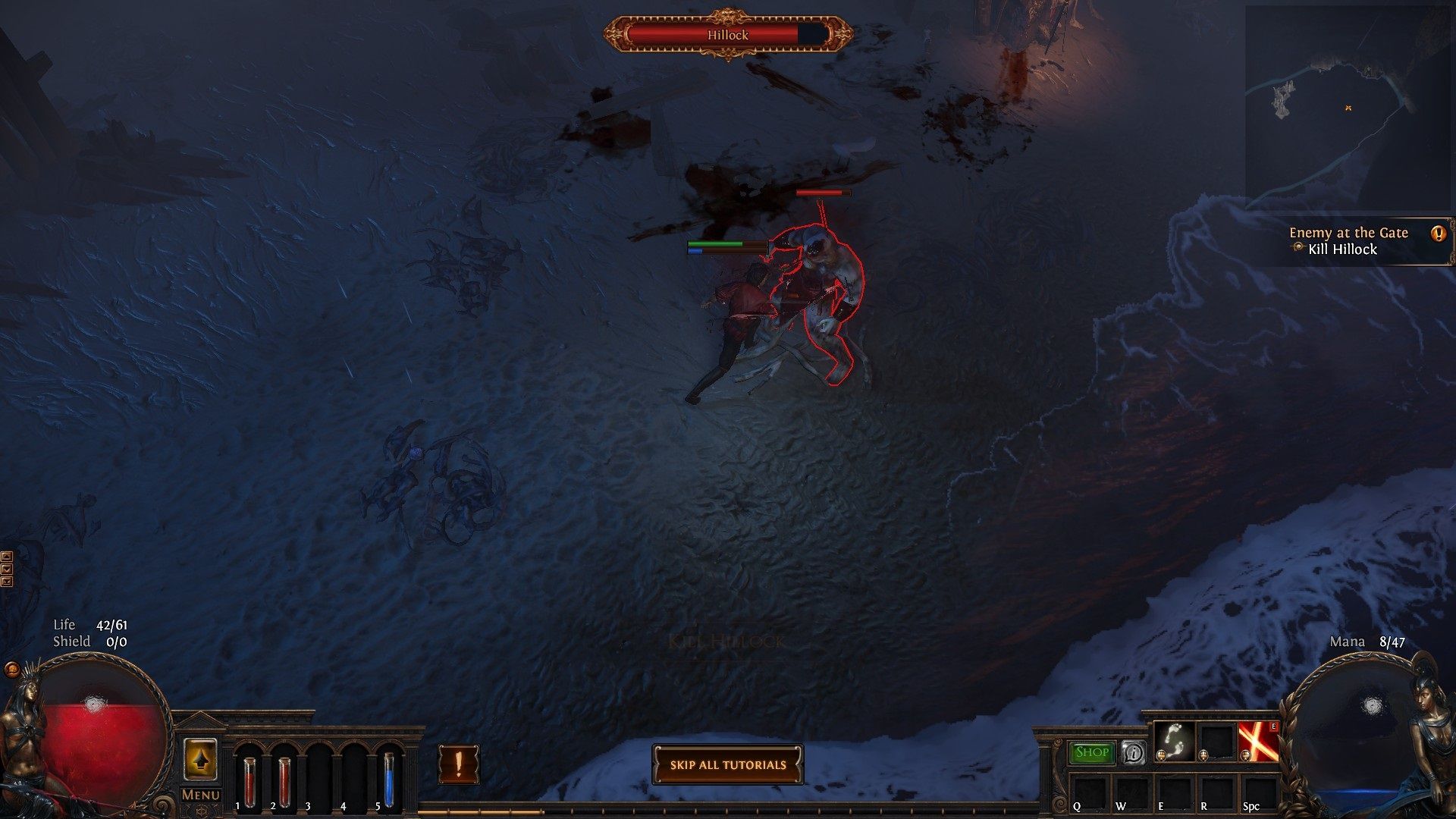 Once I landed in-game I was off like a horse on a very long track. Since I did get in a bit later than I usually do a lot of players were already well ahead of me. While in the past it was fun trying to only be a couple of levels and zones behind those quickly rushing towards maps trying to not fall far behind. This time around that is not my focus.

The first act in the game gets even more brutal every league than the last. As they slowly add in more game mechanics, modifiers on monsters, and other small changes. It can become death city till you get some skills and gear under you to stand up on.

This has been an issue I’ve brought up in the past. Despite the developers being focused on making many small changes. That first act just still feels brutal. I’m also not aware of them wanting to change that. I’m rather glad I don’t play a hardcore character. At one point I was almost in a death loop between a couple of monsters I could not exactly get away from that I also had a desire to kill. So I shamefully died a few times till I was able to take them out.

Sometimes in the past, I’ve skipped over the league mechanic until I got into higher levels. This time around I thought I would check it out as soon as I could. My first encounter with it was brutal. There was some massive hard guard right next to the Sentinel Cache. I have no idea if that was normal for a first-time encounter. In future finding and opening of Sentinel Caches, I did not have this kind of fight on my hands. I at least managed to kill it without getting killed. 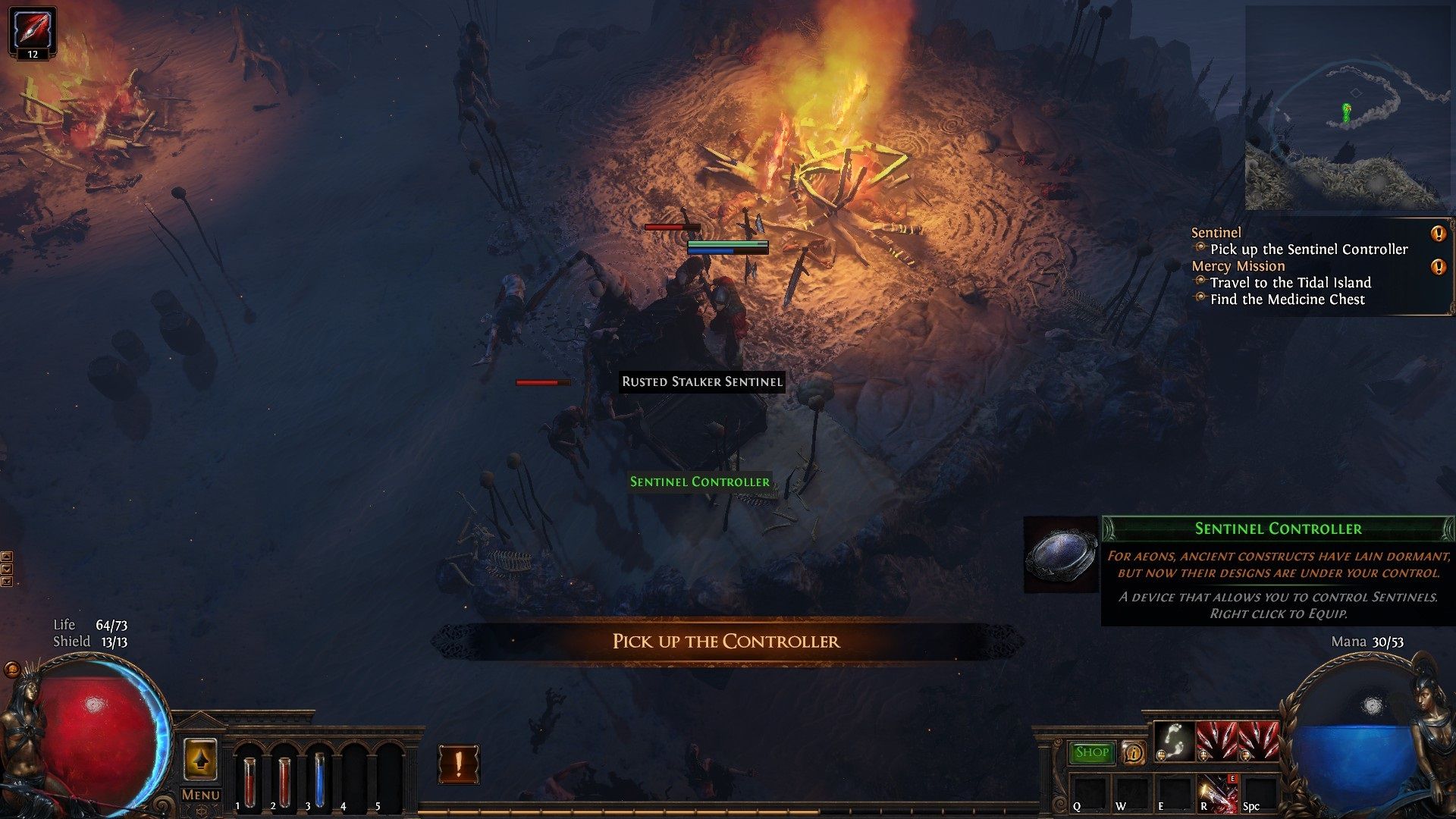 Inside this first cache and I’m rather glad I did not skip over it was a sentinel controller. I had to insert it into a new slot on my character sheet to unlock having my first sentinel slot. This I feel is why I had such a hard encounter around this area in the first place. 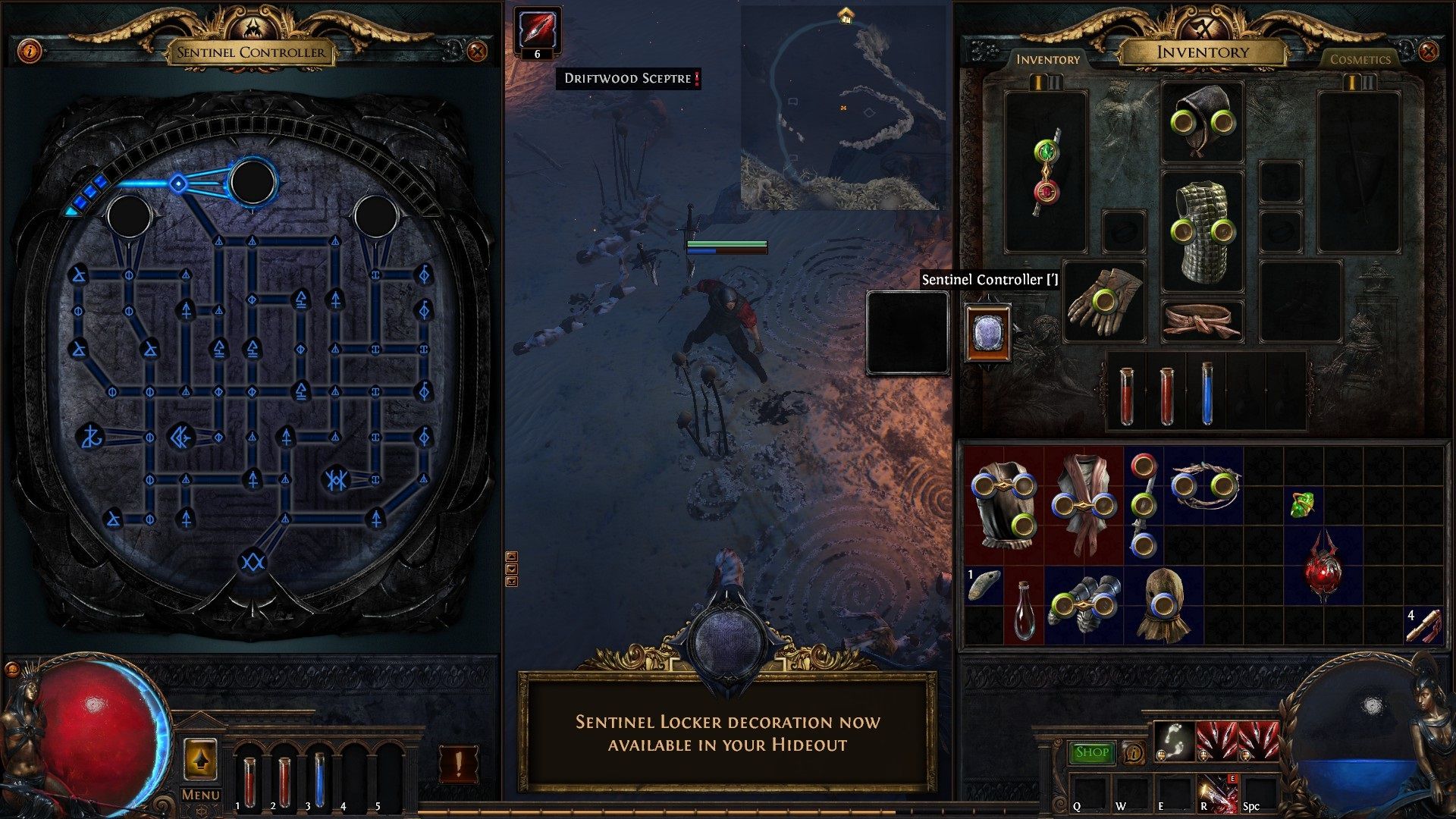 I still knew very little about the Sentinel controller panel. I don’t even understand yet how I unlock more points. What route do I want to take? Let alone much else. At some point, I’ll have to spend more time looking over it.

What I do know is you can switch nodes at any time. It seems they did not want to punish the player by having some kind of cost to change your mind. For something such as a new league this just feels like the right way to go about things for the player. 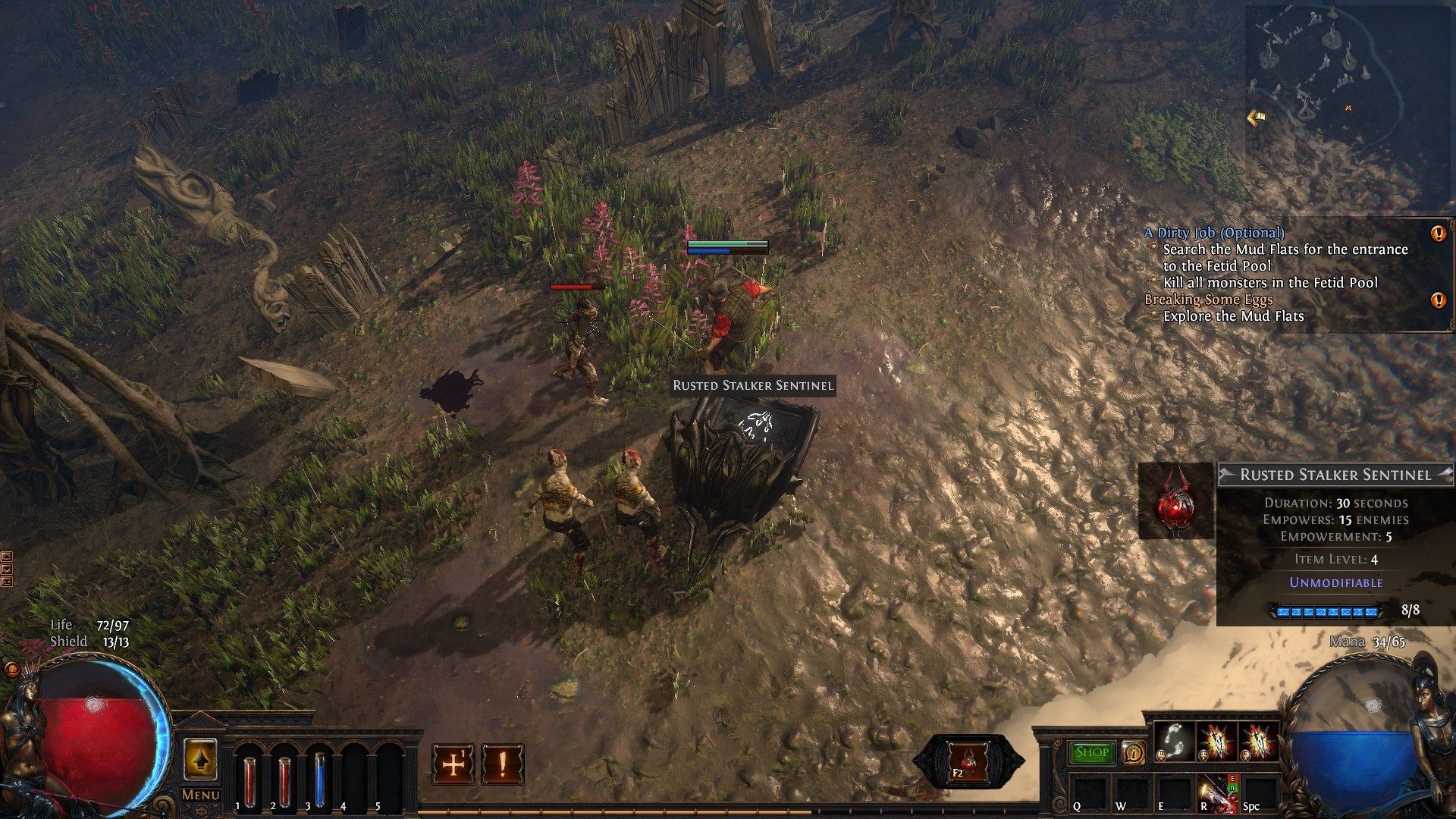 I have found a cache with a rusted stalker sentinel in it quite a few times now. I have a feeling if I searched each zone I’d find one. A stalker is the first type of sentinel. I can use one in each zone to summon the sentinel and it will empower a certain amount of monsters around me.

Monsters that become affected by the sentinel become harder to kill and have a slight chance of containing any modifiers drops such as weapons, jewelry, and so on to drop. This all depends on the modifiers for the sentinel. I ended up playing with a couple of different ones. After eight uses they burn up. Since the game is giving quite a few of them I have been doing my best to pick them up as I see them.

I am unsure yet how often I’ll be playing around with the league mechanic till I make it into maps. While I have been getting more rare items to drop from using it. Sentinals are slowing me down quite a lot. I am however not in a rush either. Only time will tell if I keep running one in each zone or if I end up skipping or overdoing them all together. I decided to cut off what I consider my first night rather early. With how late in the day the league starts I still wanted to get something out about the league, what I’m running, and talk a little bit about it.

I hope those who are playing in this league have a fantastic time. Unlike past leagues where I’ll post nothing but Path of Exile for weeks or months on end. This time around I am playing a couple of other games. So it might not be posting daily about Path of Exile and what shenanigans I get up to.