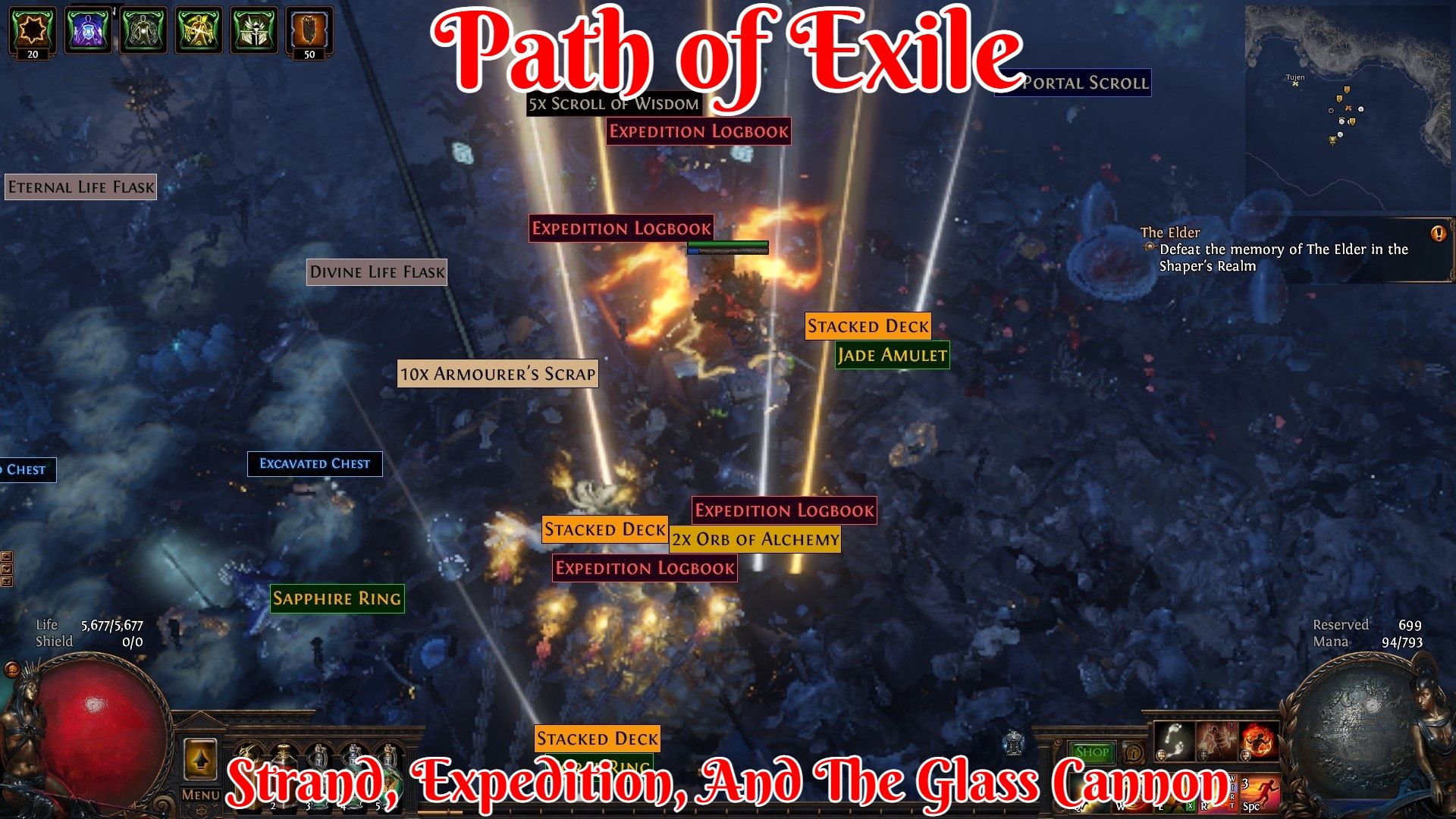 For over a week, I’ve been playing a build in Path of Exile that is quite the glass cannon. I love the clear speed on maps and that damage is amazing. It however cannot be left alone in an area for two seconds before it gets whacked by a normal monster in the tier 16 juiced map. As a result, I’ve been working on the deadeye I’m playing clearing as much as it can; then, I’d quickly switch over to my champion and finish off what was left.

Needing to play two separate characters one after another for a single map is not ideal in any way. I just really love the deadeye to the point I’m willing to accept it’s going to die and die quite often. I’m also doing content that can be a bit too much for it.

I started in the lower tier maps where it died a lot as well. After I got all of its gear I grinded out getting to level 91 the best I could. At one point I was 99% into level 90 and then went on a series of deaths. Losing a day’s worth of grinding. That ended up being the story for most days playing something so fragile.

While I did not need to run tier 16 maps there was little difference between the number of deaths I was getting in tier 14 to tier 16. I felt it was quite important to be running high enough level maps to have Eater of Worlds enabled on them. I also had some Atlas passives for drops being in tier 14+ maps. 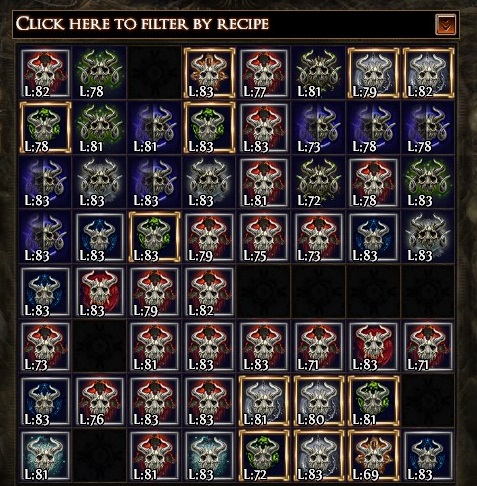 While Archnemesis league mechanic is still something I do quite often. I’m more in a stockpile of higher-tier tokens for the time being. I’ve had quite a full inventory of tokens to use up. At some point shortly I’ll be doing quite a few back-to-back runs hoping for a few exalt drops.

In this league, I found something I rather enjoy running to the point I did not care too much about trying to max out. With the playtime I had, I was usually getting 5-8 Exalt or so per day. While that is not that great I have a few stash tabs full of stuff I’m trying to offload for the time being.

I’ve also had some crazy days. Like the loot, you see in this post's screenshot. Those logbooks in total netted 200 chaos or 1.4 exalt. Add in the other kinds of drops I could get and if I had any more luck in that map I could have been close to 2 exalt. Most times it’s not like that, however.

Strand is one of those maps I just love running and have for many years now. In past leagues, it was not always something I got to enjoy as it tended to be in a region that I was not always active on the Atlas on. Since the atlas map has been reworked and the Atlas passive system allows me to farm more or less where ever I want. I’ve been hitting this map quite hard.

It’s an outdoor zone which I prefer as opposed to running indoor ones. It’s also not a very complex route to run. You have cliffs on one side and a body of water on the other. You are just running down beach zig-zagging to cover all the ground.

Strand is also a big enough map that I don’t have to worry about too many different league mechanics spawning in and blocking each other most of the time. From my understanding of other maps with the kind of setup, I’m doing that is quite commonplace. As far as the runs themselves it’s nothing that complex or requires a lot of setups. I run it with an expedition, cartography, and ambush scarabs. I also pay 4 chaos for the ambush craft option on the Atlas. I also toss in any random Sextant I roll on my two Voidstones unless they are worth selling.

In total, this setup gives me at least 7 strong boxes to open and fight within the map itself. Despite how much of glass cannon the character I’m playing is it’s rather rare for me to get killed by opening them now a day.

I also rarely struggle to get the boss down in Strand at the end. This is quite important as I’m collecting any alter decisions I’ve made that result in the boss dropping scarabs or eldritch currencies among other things. I’m also banking Easter of the World's progress for that sweet invitation I’ve been selling for 60 to 70 Chaos every time I clear enough maps. 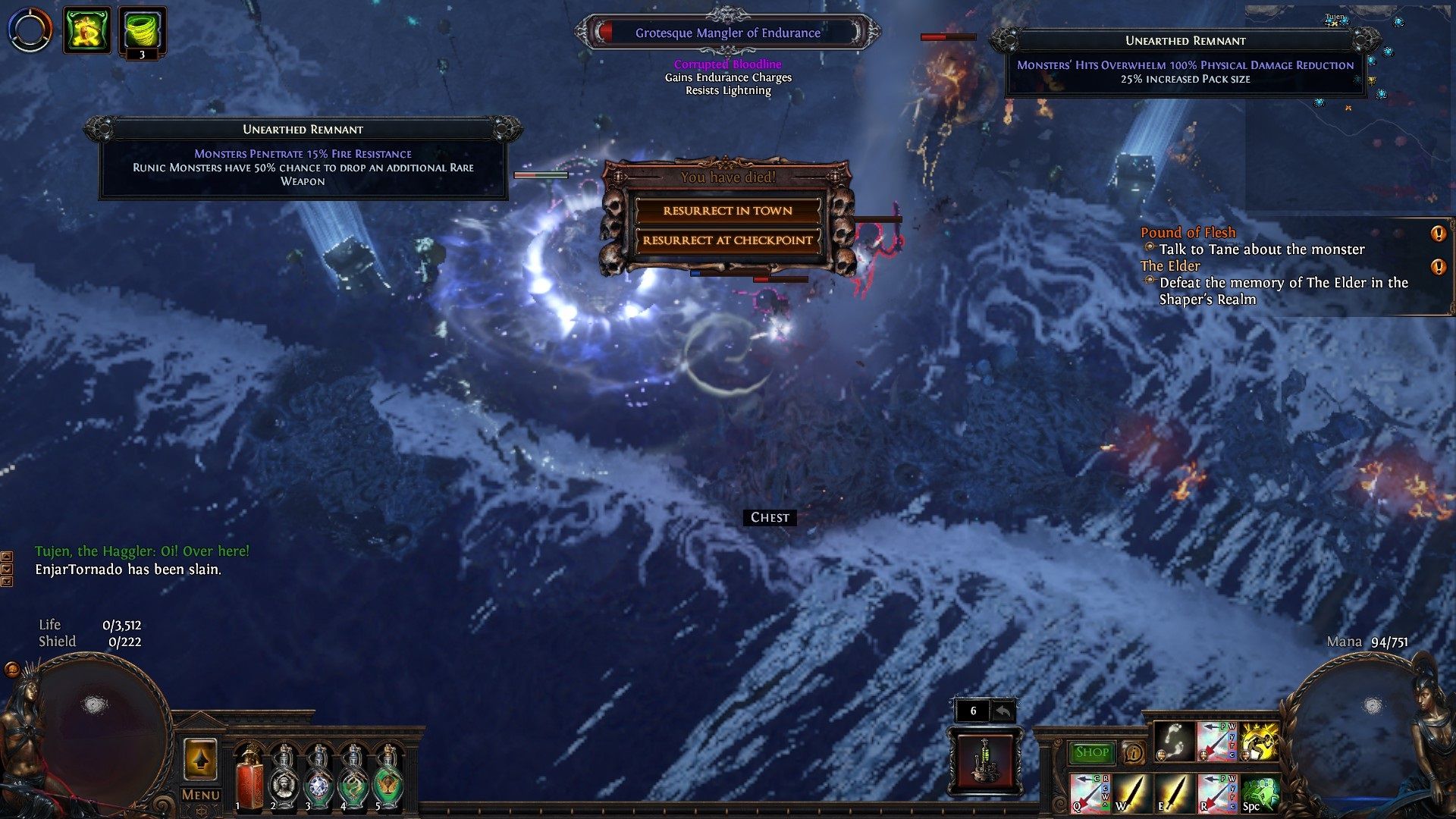 The issue funny enough tends to be a random trash map that whacks the character. I did not even start the expedition I was clearing trash obs around when that death happened. I’ll be cleaning like a crazy person dashing forward clearing everything. Out of nowhere splat. Dead and sent back to my hideout where I’m reapplying my auras and hoping I dropped a portal close to where I died.

While I could set up an on-die cast for a portal. I don’t want to give up another gem slot somewhere on my gear. Granted that would make life easy and less frustrating. This character dies so much at the moment I have no hope of it getting higher than level 91.

What I usually can’t fully clear without death is the other thing I’m running these maps for – expeditions. Once I pass where the expedition is on the map that tends to be where I move the portal back into the map for the last time.

Once I make it to the boss and kill them. I switch over to my champion. Use a portal and land right next to the expedition and start it. While the champion is tanky and can take a lot to kill him. His damage sucks and there can be an instance where it struggles dealing with too high of fire-resistance monsters. Expeditions take up a decent little-sized area on the map. This is in part why I like having them in Strand. I don’t have to worry about things obstructing outside of the random rock or two my way of getting to a node.

With the setup I’m running I get six explosive devices I get to place down. They can only be so far away from the last one you placed as well. The explosive break open remnants, chests, and creatures which are indicated by icons on the ground for you to fight.

One of the reasons I like running these so much is they require a little bit of thought. You need to look around to see what kind of options you have. Sometimes you might have a 50% increase chance of a logbook dropping (they open up entire expedition maps). Other times you might be getting a 300% increase in the rarity of something dropping. All of those increases also have a downside which can sometimes be a good thing as well. You could have increased pack size, more of a certain type of monster on so on. Which for my Champion is not a big deal. It’s the ones that give damage increase or resistance to the monsters that my Champion struggles with that tends to be an issue and something I have to be mindful of if it’s worth taking.

Sometimes I find myself redoing the layout of explosives. I have enough that I get most of the area covered which is why I’m not using a better expedition scarab to increase the explosive blasts. Order matters and you sometimes find a better way to have the modifiers you want sooner having more of an effect on a greater number of chests and monsters.

There have been a few instances of running expeditions where the champion just can’t kill off the monsters. I might have made a mistake and placed an explosive too close to resistance nodes. Sometimes the creatures have too much along with some life regeneration that he is not getting the job done either.

In those cases, I try and kill as much of the trash as I can. I then switch back over to the deadeye for the second time in a single map run and try and splat what is remaining before they splat him. After death or two, it’s usually clear.

After that, I’m done with the map. I dump off loot into my stash stabs and get ready for another run. This usualy means switching back over to my deadeye if I’m not already on him. With occasions of needing to go out and trade with other players for further scarabs and other supplies. This quite frankly has been the silliest way I’ve had to run a map in a long time. I don’t want to run low enough maps where the deadeye can clear everything I want to do as the rewards drop off by a lot. I also don’t want to give up expeditions as I just enjoy them too much.

It is at least nice to have multiple characters now that I can switch to and use as needed. Even more so if I blow up the wrong thing while running an expedition and need to switch to a character that can deal damage to the monsters that spawned.

I’m hoping a 30 to 40 exalt bow upgrade will be enough of a damage boost that I can make some other gear chances to make the deadeye a bit tanky. After that, I should be able to do what I want on just a single character instead of switching back and forth so many times in a given day. I’m however having just too much fun at the moment playing it that I’d rather not farm all of it on one of my other characters.

While I’m still a bit short in having enough exalts in hand. I have so many items to sell, trades to find and make, and other things to do. That I should be closing in if I have a big enough of a trading day. I’ll also keep adding to my piles of loot hoping to get even closer. I’ll more than likely need another 10+ Exalt for my other gear changes.