While I have been selling expedition logbooks for a decent amount I had yet to run one. I wanted to get a fuller understanding of Expedition itself and see why people are splurging so much money on these things. While I did not run any of my higher valued ones even the cheaper ones have been going for 35 chaos a pop. It seems like I only scratched the surface by running a couple of them that I’ve looted myself to get the feel and understanding of them. It seems since I’m not huge on gambling for end-game items from expedition itself I might be better off just selling them. For starting one, you had a logbook over to the expedition NPC named Dannig. He made it sound like these things were going to be dripping with gold and insane treasure. I on the other hand found them to be a bit lacking in at least what I see as nice treasure. I’m sure those gambling for high-end items sees it differently.

I somewhat guessed that you could only run one of the sites listed on the logbook. Every time I would look a logbook up you would have some of them worth a lot and others not so much. Players always priced them for the highest valued area. Once you got in there was a fair amount of scouting around the place to be done. The map thankfully displaces all the icons for most of the loot chests on the map. What you don’t see however are the nodes that give modifiers.

For the most part, I was looking for modifiers that affected pack size, quantity, or a modifier that was affecting a certain type of chest I was going after. Since I’m not sure what kind of chests are the best I tend to stick with what I know which is currency chests.

One thing I made sure I did not take was anything involving modifiers to resistance or making them immune to fire damage. I was running these on my champion who does not have the best damage but can tank quite a lot of damage. I was not sure how challenging these were going to be. 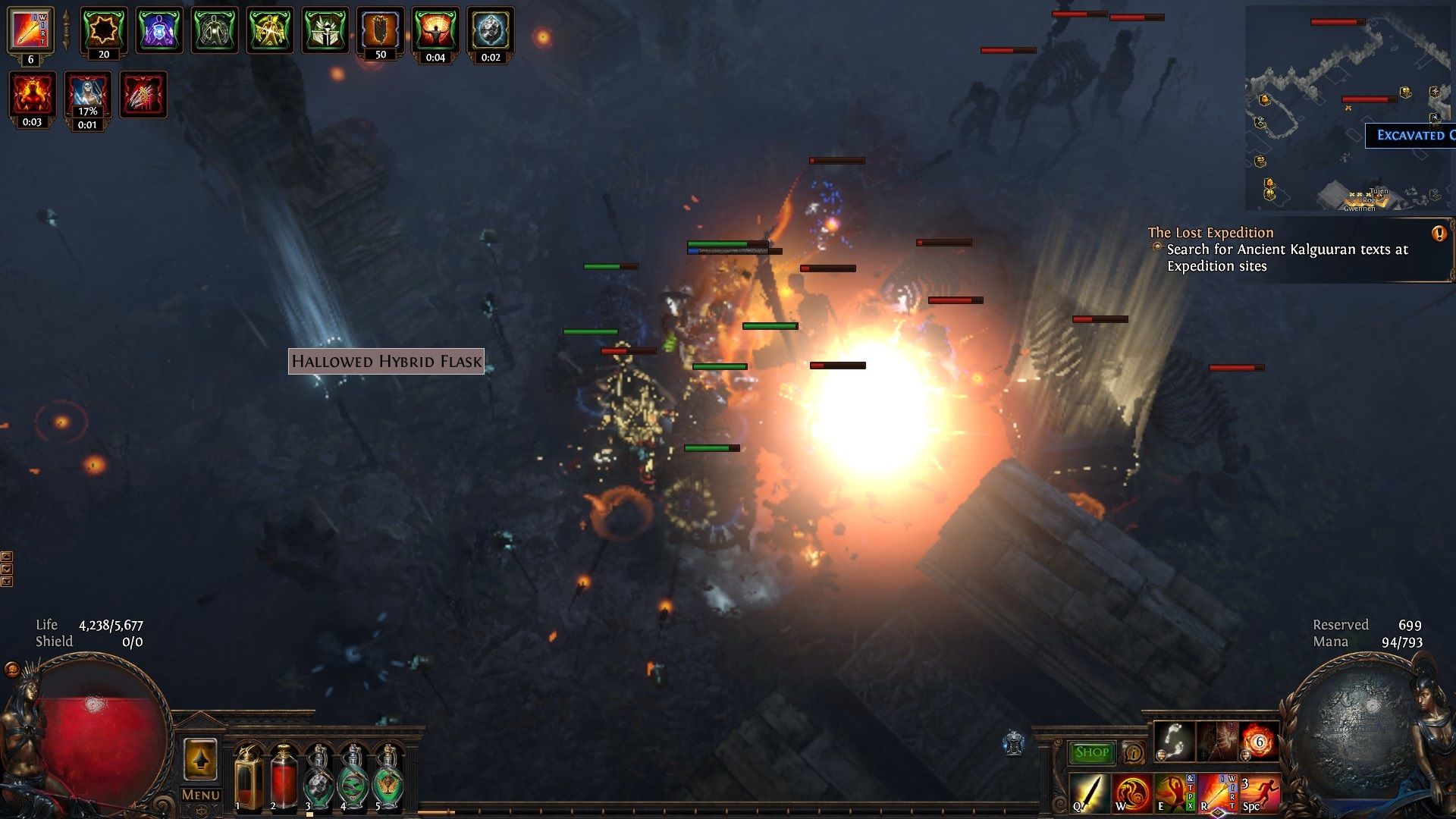 After I placed down all 20 explosives it was time to clear the map. Some of the maps I ran I found quite easy to clear. The loot on the other hand was a bit lacked luster. I’m sure there are some things I don’t fully understand as of yet.

During one of the logbooks I was running, I noticed a giant skull displayed on the map. I had two thoughts about what it could be. I had found an underground area in one map and perhaps that was an indication of another. My other thought was it being some kind of boss.

I’m rather glad I did not head towards the giant skull in the expedition right away after I blew up the charges. It ended up being towards the end of my route. That monster that was there almost one-shot even the tankiest character I have in this league. It’s some insane boss all right and I could not kill it.

While I did end up losing out on some loot. For the most part, I was able to get everything else. This could have been much worse. If this boss was in a more populated area I could have lost out on a lot. Hopefully, if I ever encounter another one of these again I have a better result.

In one of the logbooks I ran, I ended up rolling a “has an extra underground area” modifier on it. It ended up being quite a small chamber with just three chests. One of the chests dropped a note I turned into one of the NPCs. I was not paying enough attention to see if there was an icon for this area or if I just lucked out and found it.

I was hoping for some kind of massive reward for doing a turn-in. Instead, I was just told there were more of these notes to go after and find. This makes me wonder what other things I don’t know at all about logbooks in general.

Afterward, I thought I would give gambling a little bit of a try. I mostly have only been using Exotic Coinage to haggle for items from Tujen. More times than not I end up getting enough loot to cover the value of the tokens used. 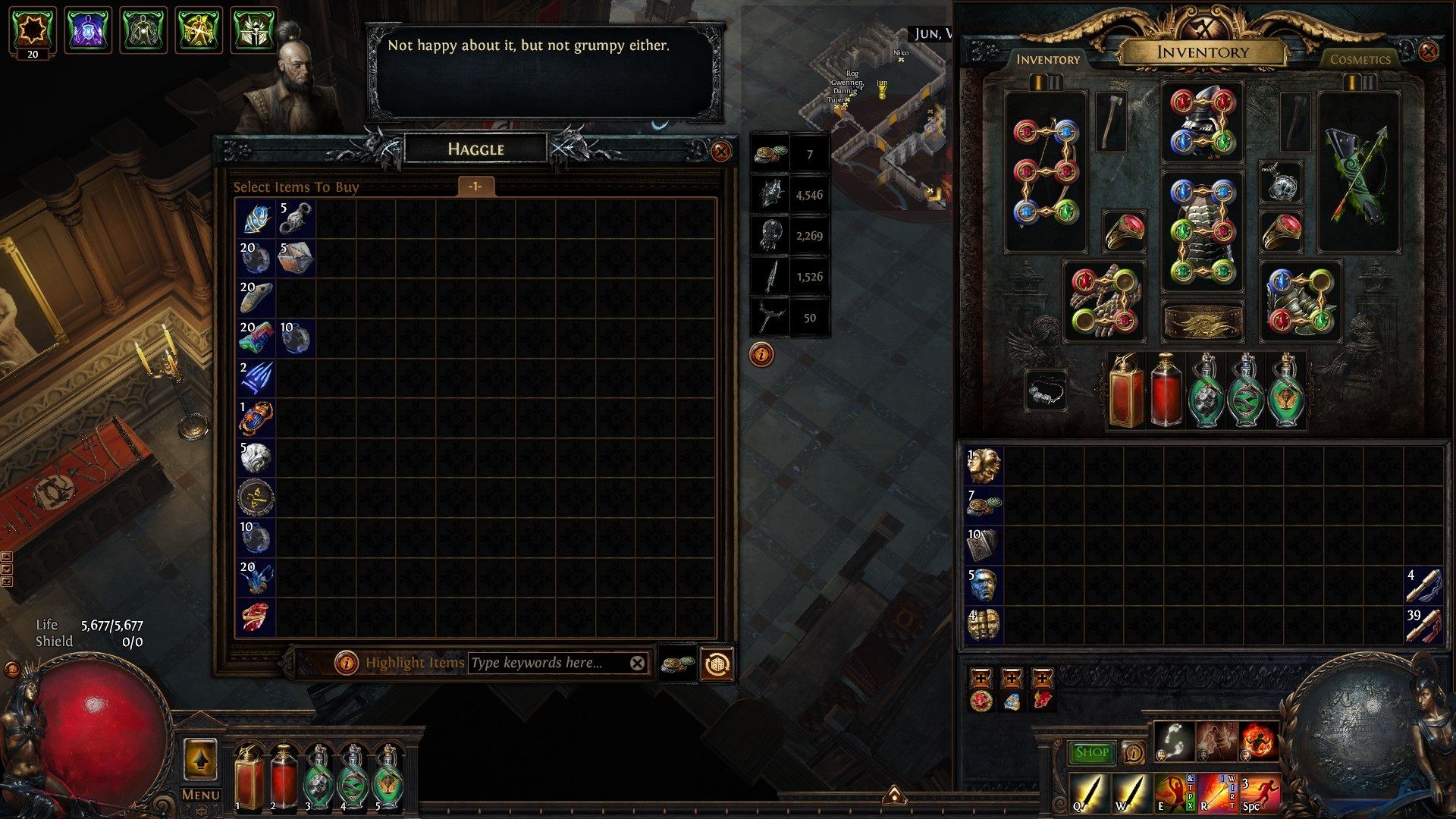 In the past, I have come across some items worth around 30 or 40 chaos, and every time he is quite quick to take the item away on a failed haggling attempt for a lower price. The moment I saw an Exalt as an item I paid full price before I even took a screenshot of it being in his inventory.

While sure I could have tried to get a lower price I was not feeling lucky. There was no way I was letting that Exalt getaway. The price in expedition artifacts seemed to be decent. It was however most that type of artifact I had for trading with.

Sure enough when I used an exotic coinage to reroll his inventory that next screen had a full Stacked Deck that wanted those same artifacts. Based on that price alone I got quite the deal for my Exalt. Pulling the Exalt also made all my logbook runs profitable. This I was not expecting to be the gambling part to help cover it.

I pressed my luck and tried gambling for belts on a different NPC. I don’t know what the chances are for pulling a 100+ Exalt item but I’m going to guess they are not good. Gambling on such an item seems to be an all-or-nothing kind of deal. This is why I prefer the other NPC.

From my limited understanding, logbooks look like they are a great opportunity to farm up a bunch of the non-tradable currency artifacts needed to buy items from the expedition vendors themselves. While I did get some of the tradeable currencies as well. I somewhat struggled to just break even for the value of the logbook by selling what I got while running a couple all on its own. 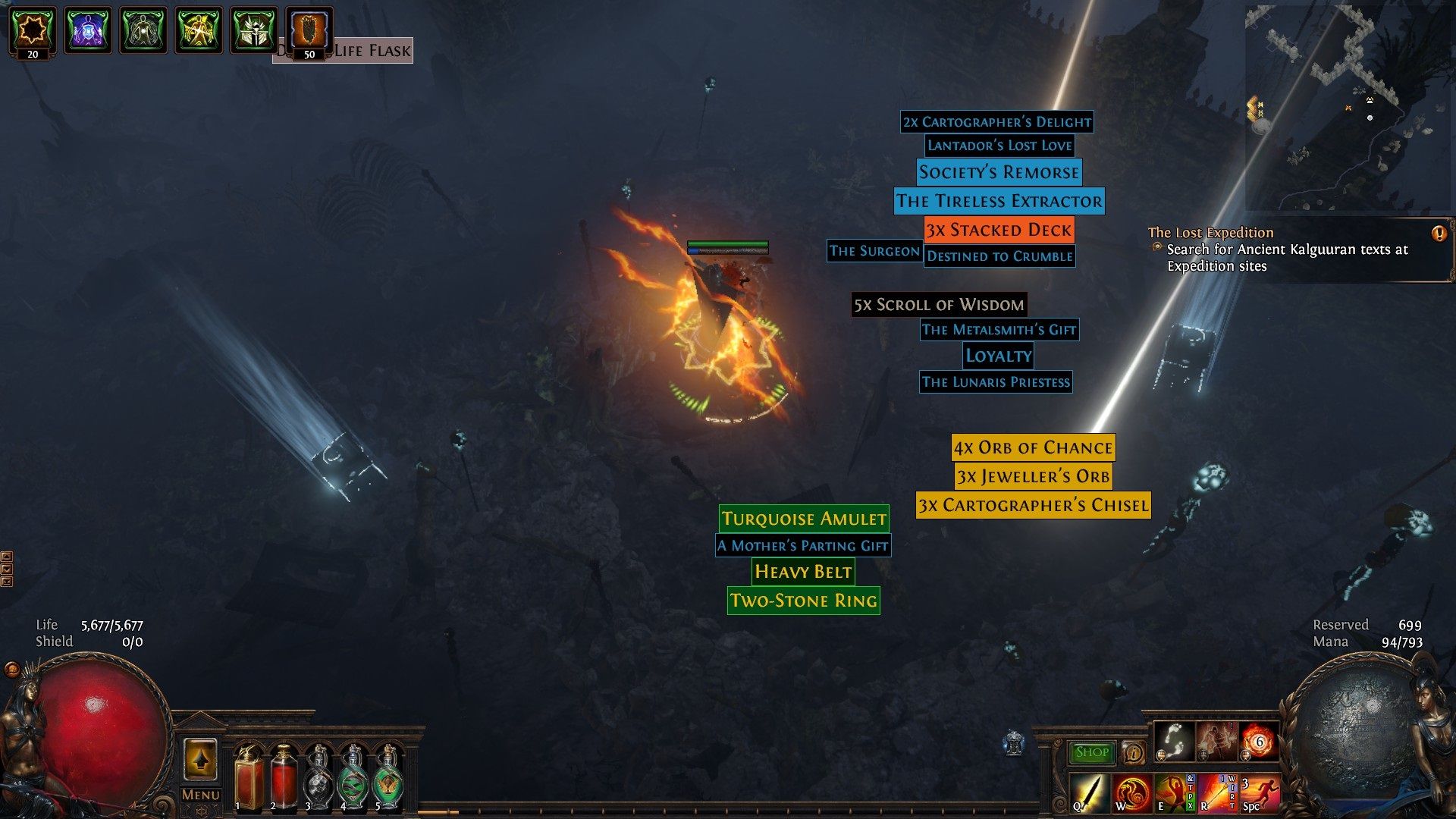 Logbooks were quite fun to run. I’m just not sure I have the right kind of build to do them. That boss I ran into destroyed me in such a way I knew I was not going to kill it. I’m still unsure if I’ll sell all future logbooks I find or if I’ll try a few more just for the fun of it.