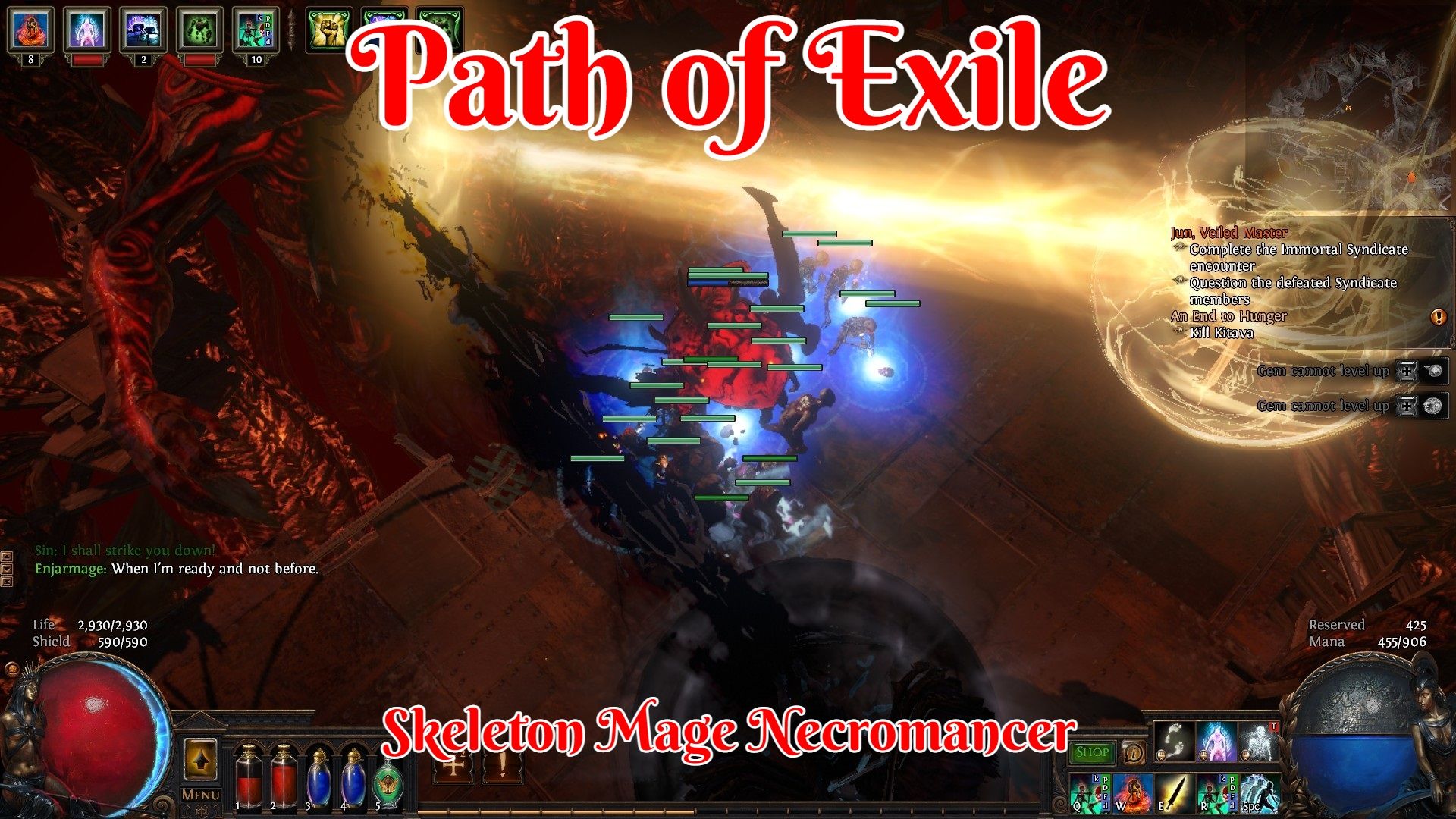 I’ve been wanting to play a minion build for a while now. While I won’t be able to fully deck out my new character once it hit maps with end-game gear. I do have a few Exalts. Not to mention I’ve been saving some leveling gear to help ease the process.

The first couple of areas went by like a breeze. I was wearing a six-link tabula that I picked up from my stash as soon as I hit the first town. While I did not have 6 gems to put into it right away I sure left that town with a few gems ready to take on the world.

It also helps on a fresh character to already have a stash full of a random assortment of currencies in Path of Exile. Anything I need to buy off a vendor is mine. If I need another socket or change the color of a socket for a gem-- I can afford to do so.

I also had gear for the majority of my gear slots. All usable at level one for my character. Some of it I would take into maps struggling to replace it till I had a lot of things set up. My goldrim leather cap for example has 40% to all elemental resistances. That thing saved my behind a few times, to say the least.

The interesting thing about a skeleton mage build is it has some required items. Without them, you cannot play it. At the league start, these items were quite pricy like many builds. Expect here you could not get away without having them. The good news is you don’t switch over to using skeleton mages until around map level anyways.

Since I had the currency at hand already to buy one. I picked up the required gem called a Dead Reckoning. It allows your skeleton summon gem to summon skeleton mages instead. Quite the key item. It was however not of any use to me at the lower levels. The other support gems that would pair well with the summon skeleton skill would be acquired later.

Despite having a much easier start than one would with nothing. Things got a bit interesting in act one when I could not kill the first mini-boss in one go. I just did not have the damage to kill it before I ran out of mana and life flask charges. The witch class is quite weak when confronted by my melee attackers.

I managed to finish off the first act of the game without much further trouble. I also did so in around half the time my first run of the league took. I was under-leveled and remained that way for a few acts. Most of the time I was reliant on my minions to get the kills and experience for me as I ran past things when I could. 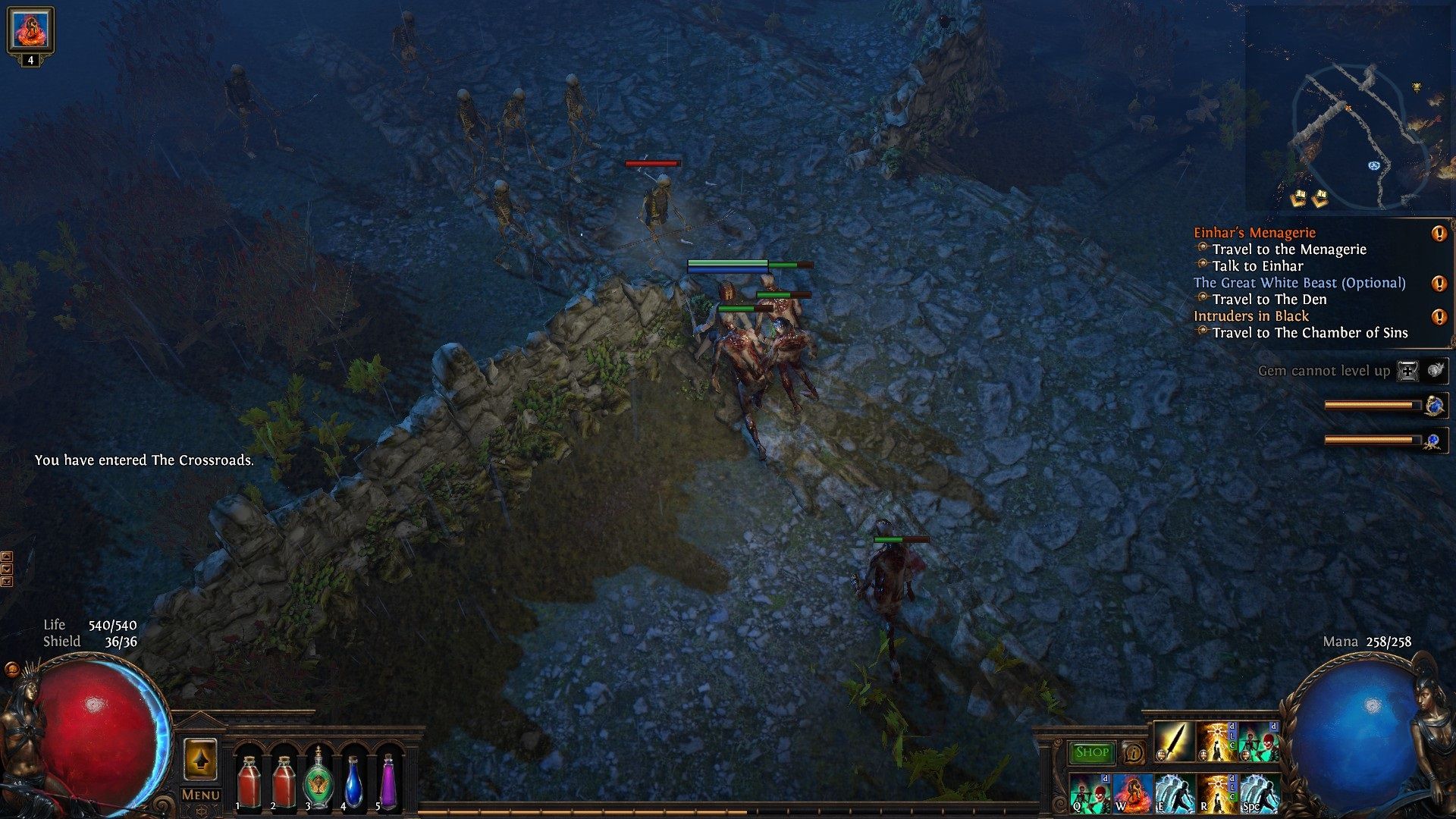 At the time my minion army was quite small. At the lower levels, you can only summon a couple of minions. I had with me a couple of zombies that I was using as meat shields. I would also spawn a couple of skeletons ahead of myself that would do a lot of damage. My minions were however not my main sources of damage. I was raining down bolts of Absolution from the sky. Dealing physical damage and spawning in more minions to do my bidding. This skill came in quite handy every time I faced a boss in the campaign. The enemy would melt right before my eyes.

For a while, I was making a mad dash for things. Nothing was stopping me. Outside of getting killed in act one I would not get killed again till act 5. I did not need to stop to pick up portal or wisdom scrolls. All the low-level currencies I left rotting in my wake of death.

The nice thing about a second character in the league is being able to skip over some things. I no longer need to run the trails needed to unlock the labyrinths. Sometimes they were well out of the way of the main storyline anyways. So skipping over a zone here or there adds up quickly to the time saved.

I was also skipping over a lot of the quests. Some of it I knew would only reward gear or other items that I just did not need. Others that would reward passive skill points I would later pick up if I missed them before I hit maps. I was more focused on staying under-leveled for an amazing experience as I blazed past zones leaving them a blur in my mind. 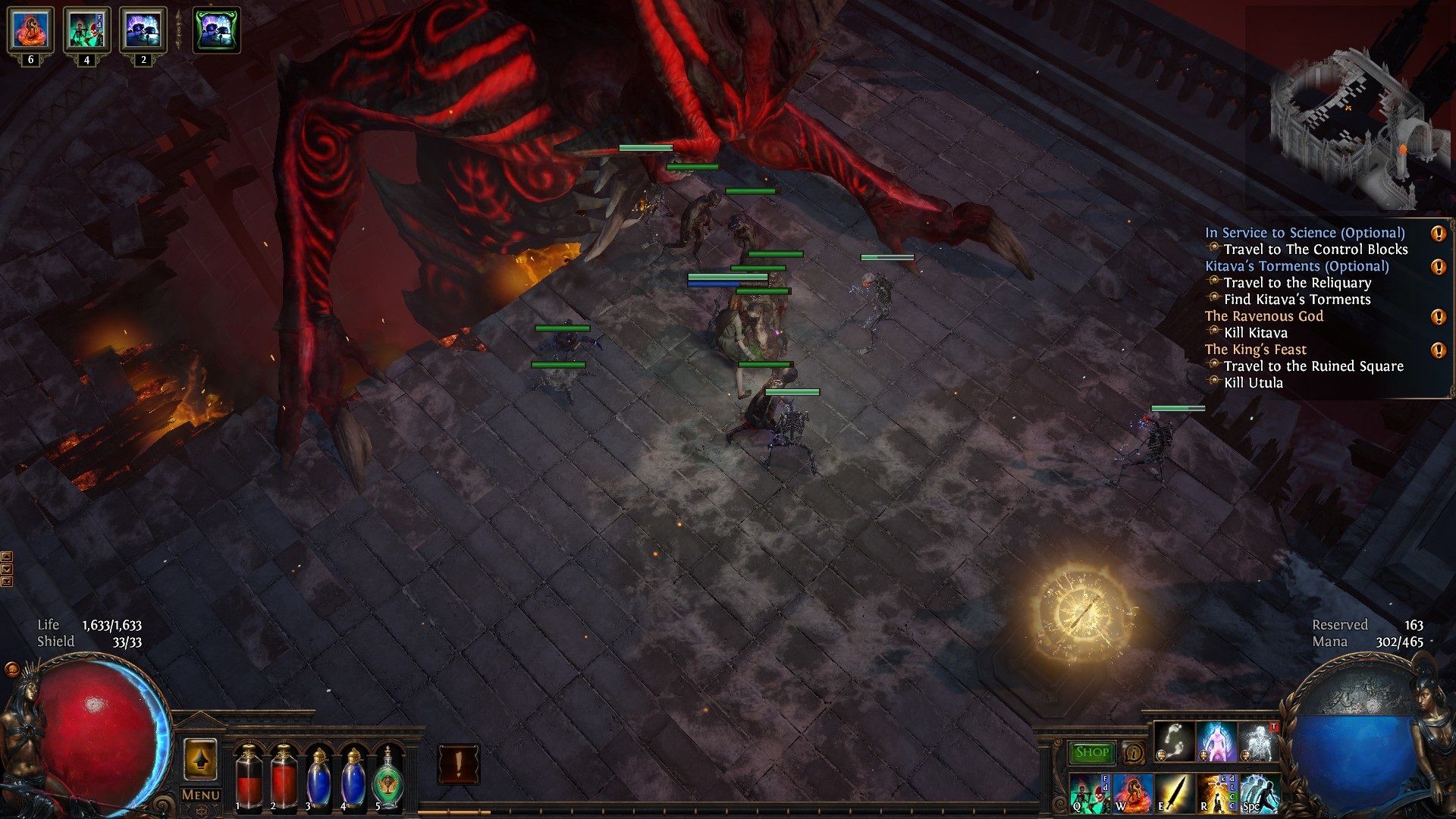 Before I knew it I was at the end of act 5. It was time to kill Kitava before taking the boat back to the first town of the game that has changed with time to do it all over again but seeing the scars my damage had left on the world.

After that, you take a bit of a resistance penalty that is permanent. While resistance was important in the first half of the campaign if you are not sorted out for act 6 there is going to be a lot of death and suffering waiting for you.

I ported into my hideout to take advantage of the crafting bench I have in there. Since I already had a lot of crafting recipes for adding modifiers unlock from my first character. It made things like adding needed fire resistance or life easy. Even more so since I already had a bunch of currency to burn just for the occasion. 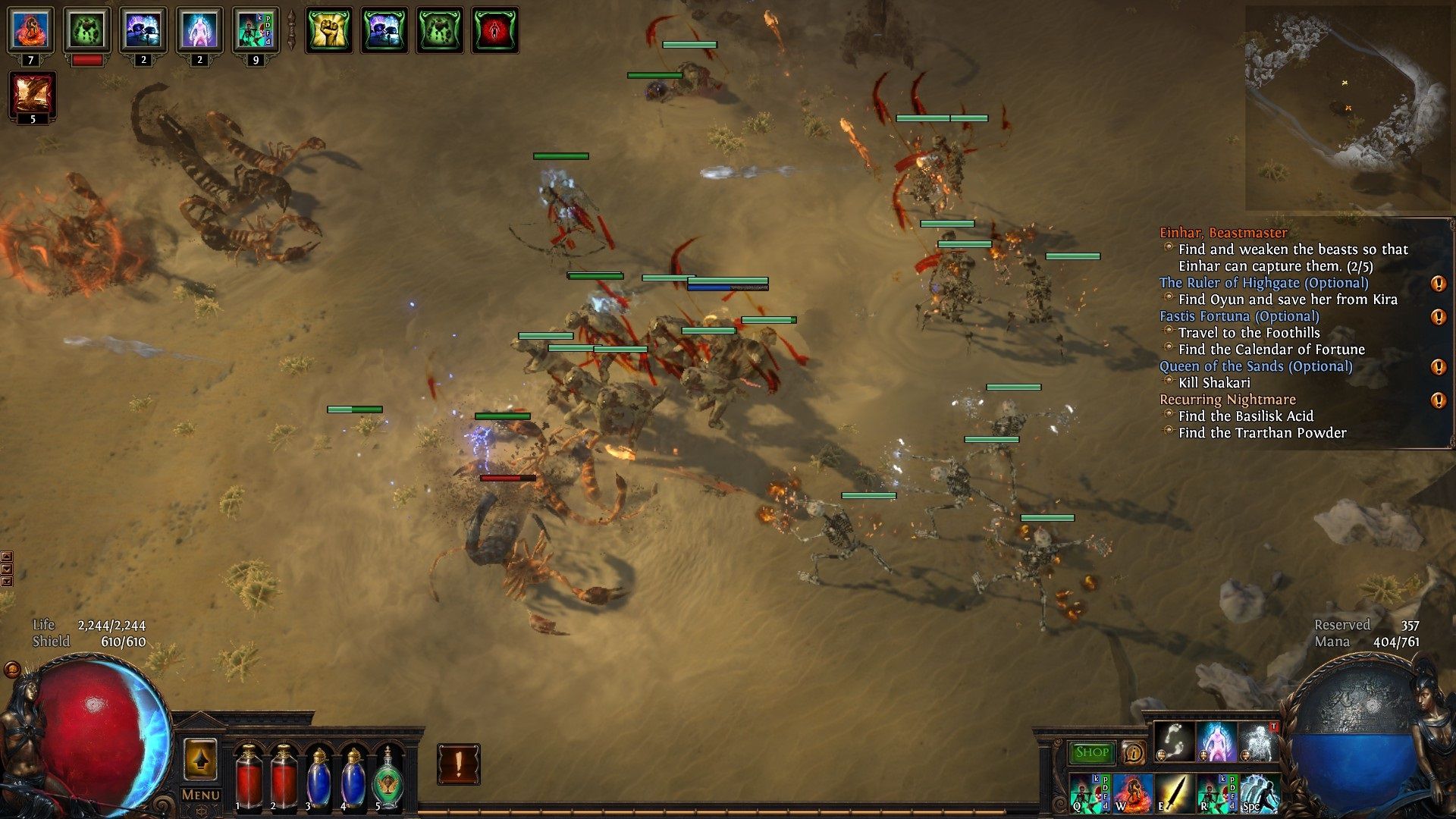 Over time my army of minions grew. I was slowly leveling up my minion skills gems and picking up different minion nodes on the passive skill tree. Some of which allow you to spawn in extra minions.

My starting gear was however beginning to falter. Even with me replacing a few pieces and crafting on some needed stats it was soon not enough. I was for what felt like forever four or more levels under whatever area I was in.

I ended up stopping at a couple of random places and clearing them for the experience. I don’t quite call that late into the night where it was. I just knew I was starting to get killed more frequently that it started to slow down my pace. 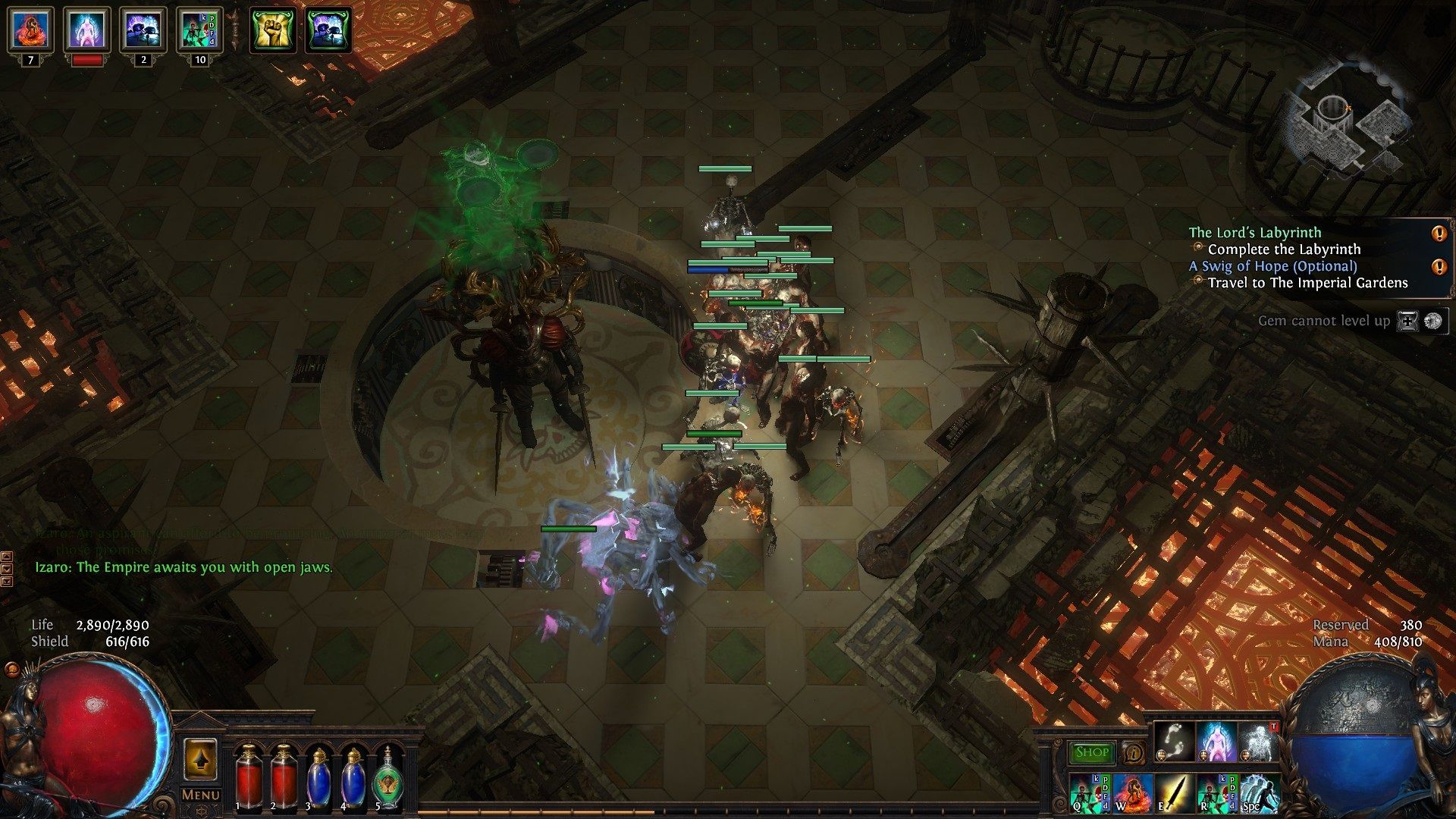 I also went off and got caught up on some labyrinth runs. Having the special passes and ascending to be a necromancer would help aid me in killing Kitava. It was something I had neglected as I usually do since I was not struggling enough to take the time to run them. I also wanted to do this before losing resistance.

After I had killed Kitava I was nearing the levels I needed for some gear my build would be using. I had just enough currency left over to buy myself a proper 6-link chest that I would be running my skeleton setup in till I could afford something better.

I spent some time repricing old items I had up for sale. Along with finding some things I was holding off on selling till I was done running through the campaign. I raised a few exalts to my name to buy some needed upgrades. It was however just a start for the future adventures I would be embarking on. Here is hoping in a few days the Skeleton Mage Necromancer will be doing what I was hoping to be doing on my explosive arrow build. There are a lot more things the build needs before things take off.

Until then I have a massive trove of maps and most of the Atlas unlocked. It will be more about running whatever areas the character can handle for grinding out experience. It’s rather nice not having to focus on finishing the bonus object for each map in a particular tier before moving up to the next. I just get to binge run and burn.

For the time being, I’ll be switching back and forth between my two characters. The skeleton mage is just not at the point yet to kill certain things. The explosive arrow character can tank a lot of damage and deal with some trouble when I run into it.

At some point, I might sell my other character's gear. While I don’t fully expect to get what I invested into him. It should go a long way to getting my new character up and off the ground. I however want to make sure before I do that I’ll be sticking with the new character. Who knows I might end up keeping him around if I can find a better use for him.