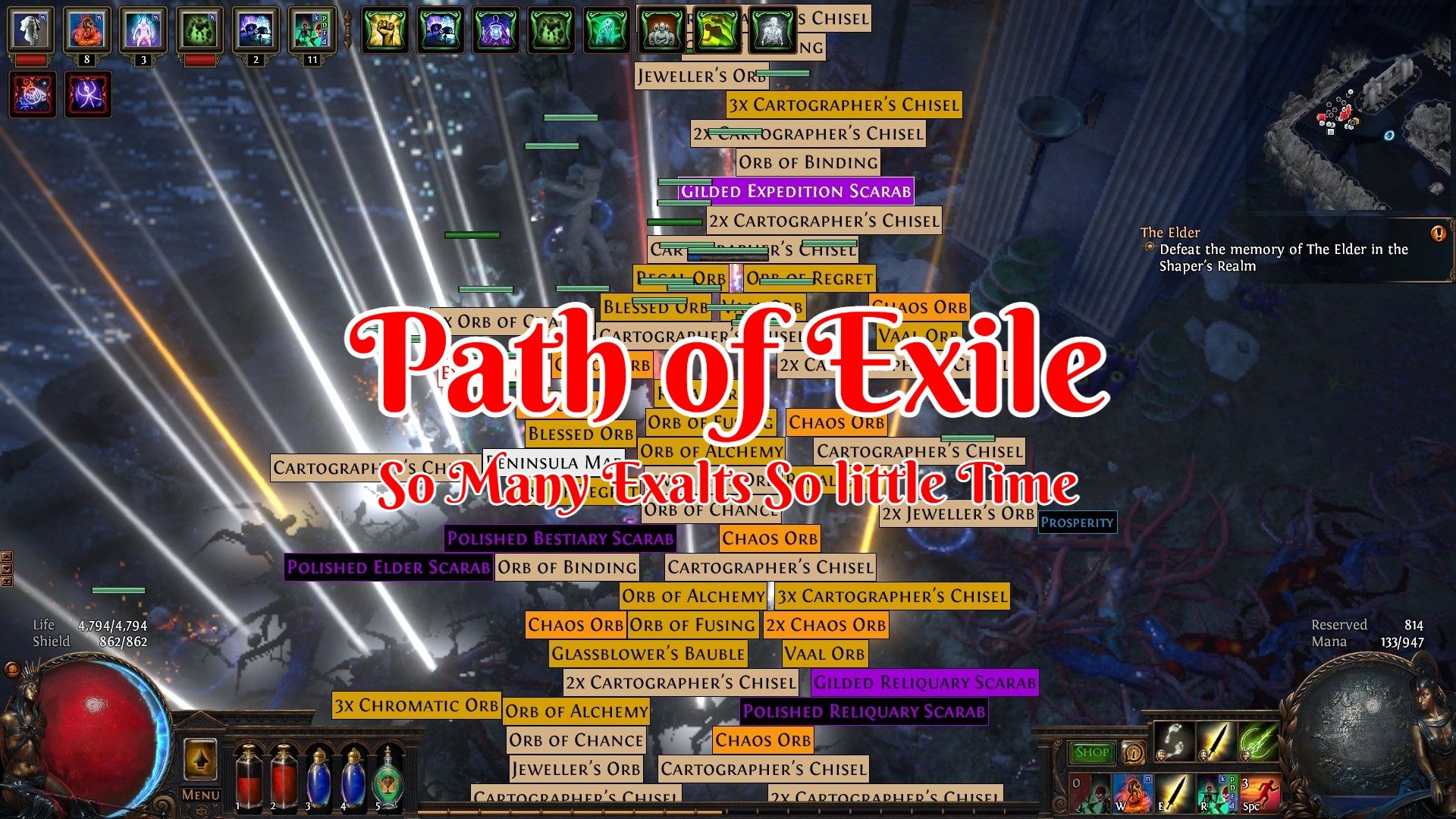 It has been a few days since my last update and things have been going decent. The new build I’m playing is taking a lot of investment to get it going to the degree I want it to. I still have a few final pieces I need to upgrade to something better. I however have now acquired some of the bigger things I needed.

This league like the last league has been insane with the pure amount of Exalt drops. Outside of those and selling tons of scarabs I’ve been lacking anything else big. I will hopefully be switching over soon to farming what I’ve been wanting to. 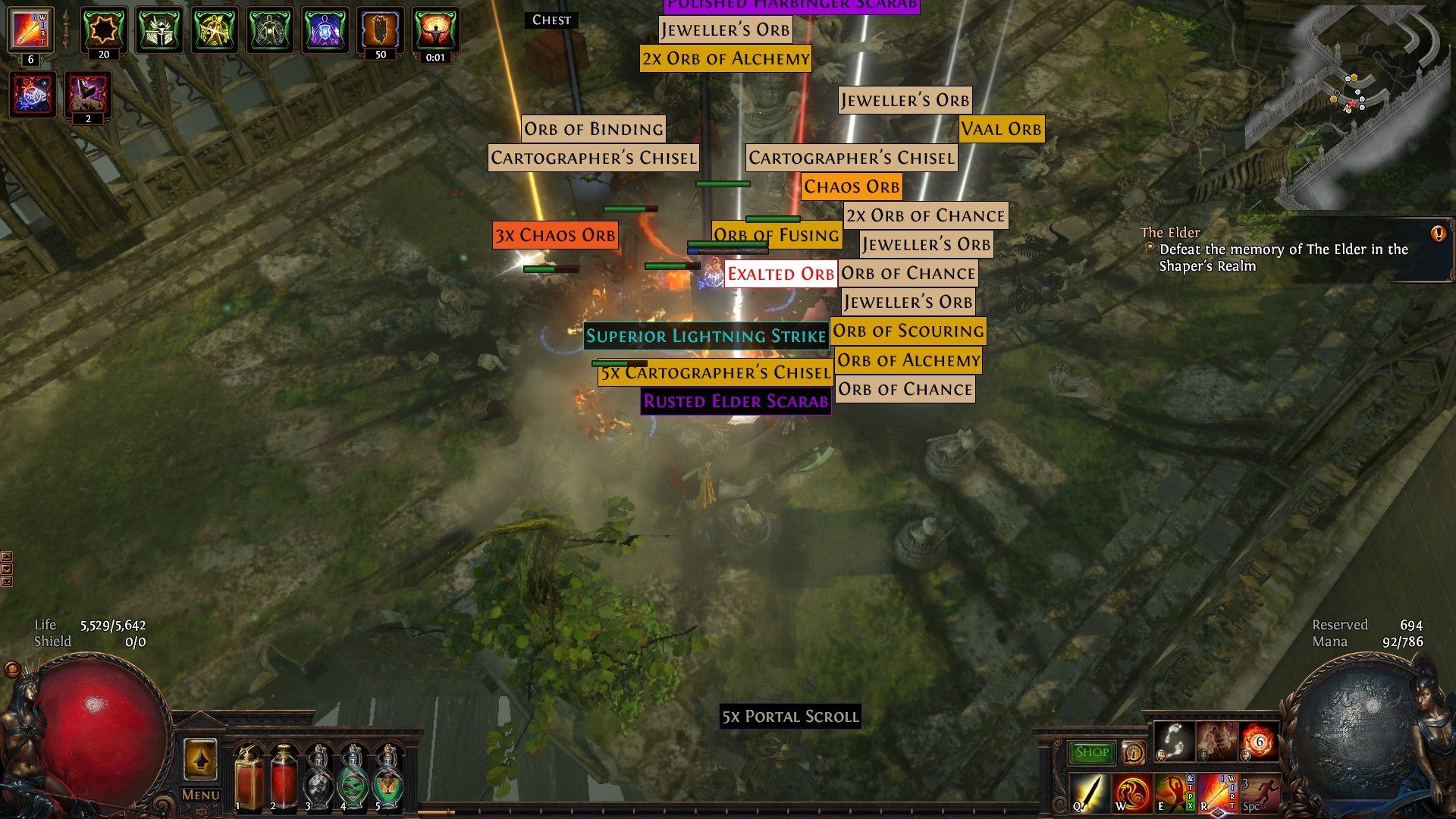 There is always a downside to having too much older player knowledge of a game. I took what I’ve learned from the past league and the years of playing this game to this league. I tried to set myself up to as quickly get to a certain point as possible.

The result was not ideal. The first character I made did not live up to what I was hoping. Despite spending a decent amount on his gear he is pale in comparison to my last league's starter. Even the new character I’ve made is just not cutting it as of yet.

I will more than likely be changing gears somewhat from my plans. I’ll be attempting to switch over from wanting to do Maven and a bunch of other bosses. To just doing single target bosses if that works out with my new character.

The issue is my newer character still falls over dead if the wind changes slightly. It’s rather disappointing being almost 30 exalts spent into the gear now and it still can’t handle being hit by certain trash mobs while out clearing a map. It’s been a fun adventure at least. Just not as stable as one I was hoping.

One of the things that have been holding me back has been struggling with the resistance of all things. The build I’m playing requires a lot of specific modifiers making resistance rather hard to get. I even have entire pieces of gear that you would have to pay an absorbent amount of currency just to get everything and resistance on it.

One of the ways to combat the resistance issue is packing up a Necromancer node called Commander of darkness that has +30 to all resistance for you and allies (minions). Since there were more important places to spend my ascendency points on I saved it to last. Just one issue with that. The last labyrinth run I needed to do for those ascendency points has been a struggle. One day I ran into a layout that was so nasty I don’t think I could even do it on my main. Other days I’ve learned it’s hard to see traps on the ground when you have an army of minions around you. Making it easy to move quickly to the wrong spot and get killed.

Thankfully I overcame that issue after a few failed attempts. I even had made it to the final encounter in the labyrinth just to get one shot by the boss. It’s shocking how paper-thin the necromancer I’m playing is. At least after trying a few times finished it.

Once I landed the needed points I wanted I could finally upgrade to the helm I needed. The issue is it is quite pricy and to switch over to using it you need to spend about half as much on other things. A bit of an overlook on my part to not notice things running with awakened support gems among other things. At least in this league, they are being farmed by many. Just the other day I got the helm I sort of wanted. I ended up deciding to go for something with a bit of resistance over the final modifier I could have gotten. Some of these helms crazy people are asking for 50 or more exalts. They're also a lot of competition to get these helms so it’s not hard for some flippers to drive up the market. Thankfully I got something useable for 16 exalts.

I more or less funded the entire purchase just from all the exalt drops I have been getting. I have been mostly focused on leveling up my new character so I can get a lot of the passives it needs to do what I want to do. Thankfully there has been no shortage of exalts dropping. I think in a single day I had five exalts drop within a few hours of each other if not more. Yet every time they do drop there is just this amazing feeling you get seeing one. I’m glad that feeling has not gone away.

Perhaps one of these leaguers I’ll get something even better than a to exalt. That once-in-a-lifetime drop that most players will never see. I am nearing enough playtime thought all these years that I should just by random get such a drop. Perhaps this is the year it happens. 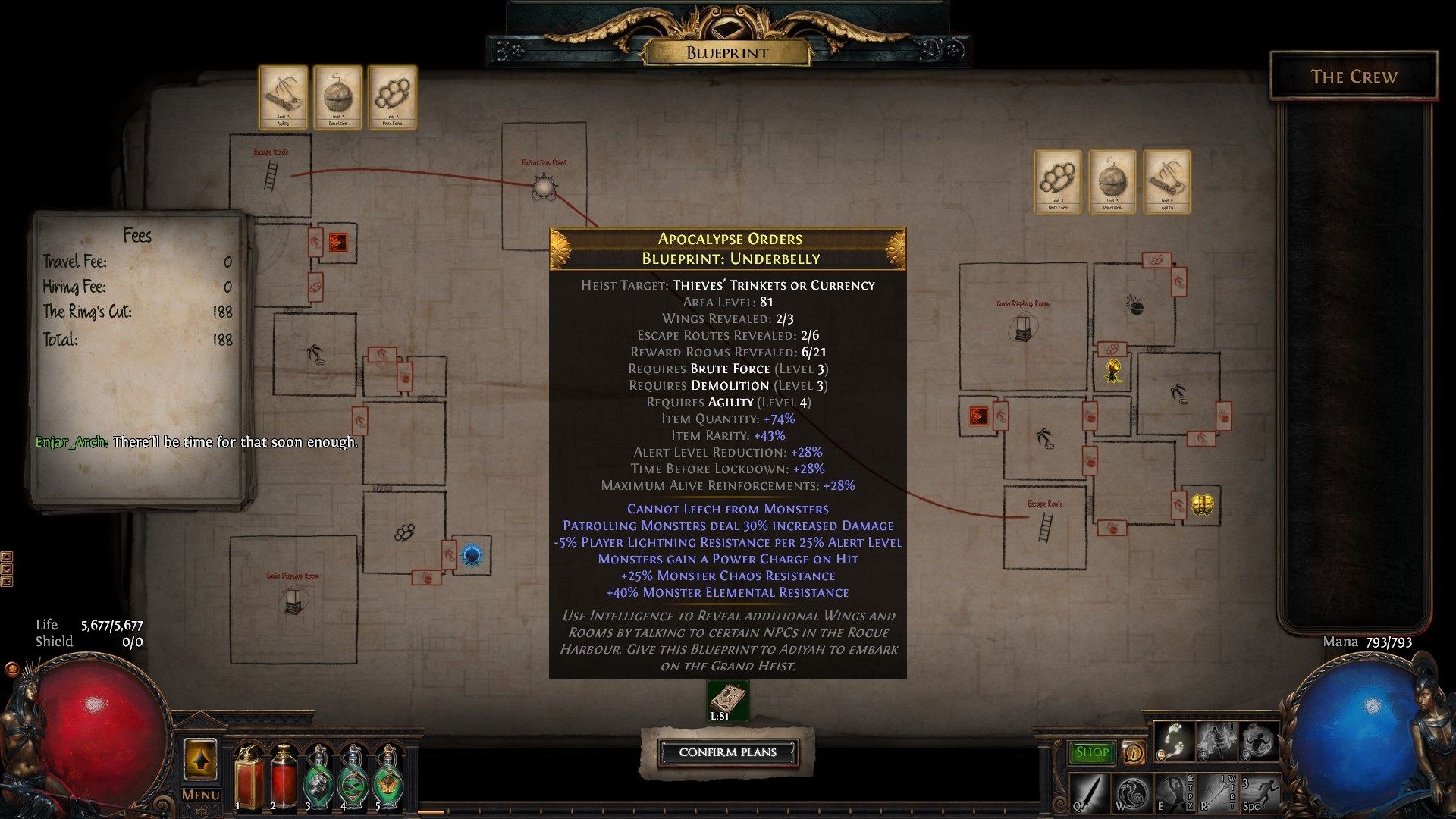 Everything else I can do has been rather lacking luster in getting currency. I’ve been skunked a few times now running Grand Heists with thieves' trinkets or currency as the reward. At best I get a couple of chaos at worst not even enough to cover my costs to run them.

Every ten tier 14+ maps I’ll run I have been switching back over to my main. That way I can do the Maven invitation. I have even attempted to do some harder inventions like I had plans to do in this league. My main character just gets murdered. Things have been a bit disappointing on that front.
One thing I have not done a lot this league has been Delve. I am kind of itching to do a bunch of it at some point. I’ve been stacking a lot of daily missions for Sulphite that I could run at some point. Since Sulphite scarabs are not worth much I’ve been stockpiling all that I’ve looted as well.

I’ve also been tempted to cheery pick all the heists contracts I’ve looted and just do yet another full-day run of them. Since I have Atlas passives for heist I’ve been picking up quite a lot of them. That would at least allow me to finish off getting a few more items I need for the necromancer. Hopefully, soon I’ll line up something more effective farming-wise. Otherwise, I might just rework a large portion of my passive Atlas tree and go for something else. The orbs used for resetting those passives have become quite cheap. I also have looted a lot of them which I end up selling.