It feels like I’ve been on the pursuit and I just keep coming up short. A series of singular events occurred leading me down a certain pathway that I did not see coming. It was almost mine but I was just moments late.

I had been running quite a lot more maps trying to get a decent pool of Garden maps so I could farm for a divination card I wanted. That I could turn in to get a bow if I had enough of them. That would just be the first step of many I’d need to do, learn, and gather things to craft a better bow than the one I currently had at the time.

After many hours I was just not having any luck in getting a single Gardens map to drop. It’s like the game knows it’s what I’m after and it’s not going to let them near me. I was feeling quite tired and a little peeved to the point I was going to call it an early night.

Throughout the entire night, I was getting contracts for Heist missions. I had run some just the other night for the first time. I was still intrigued by the game mechanics and possibilities behind them.

What was going to be the last map for the night ended up dropping an active contract mission. You can’t place them in your storage and have to talk to a specific NPC in the Rouge Harbor to get them started. Feeling for a bit of an itch to run a few I had acquired. I went for it. I ran around a dozen Heist contracts. I was learning a lot more about them. Including unlocking some new NPCs so I could run ones I could not do so before. I even acquired some gear for the different NPCs you can hire to wear.

On the last Heist for the night, the thing I had been seeking for far too many hours dropped. Yes, a single Gardens map to run. I chiseled and alchemy the thing up giving myself the best chance at getting some dropping hoping for more Garden maps. 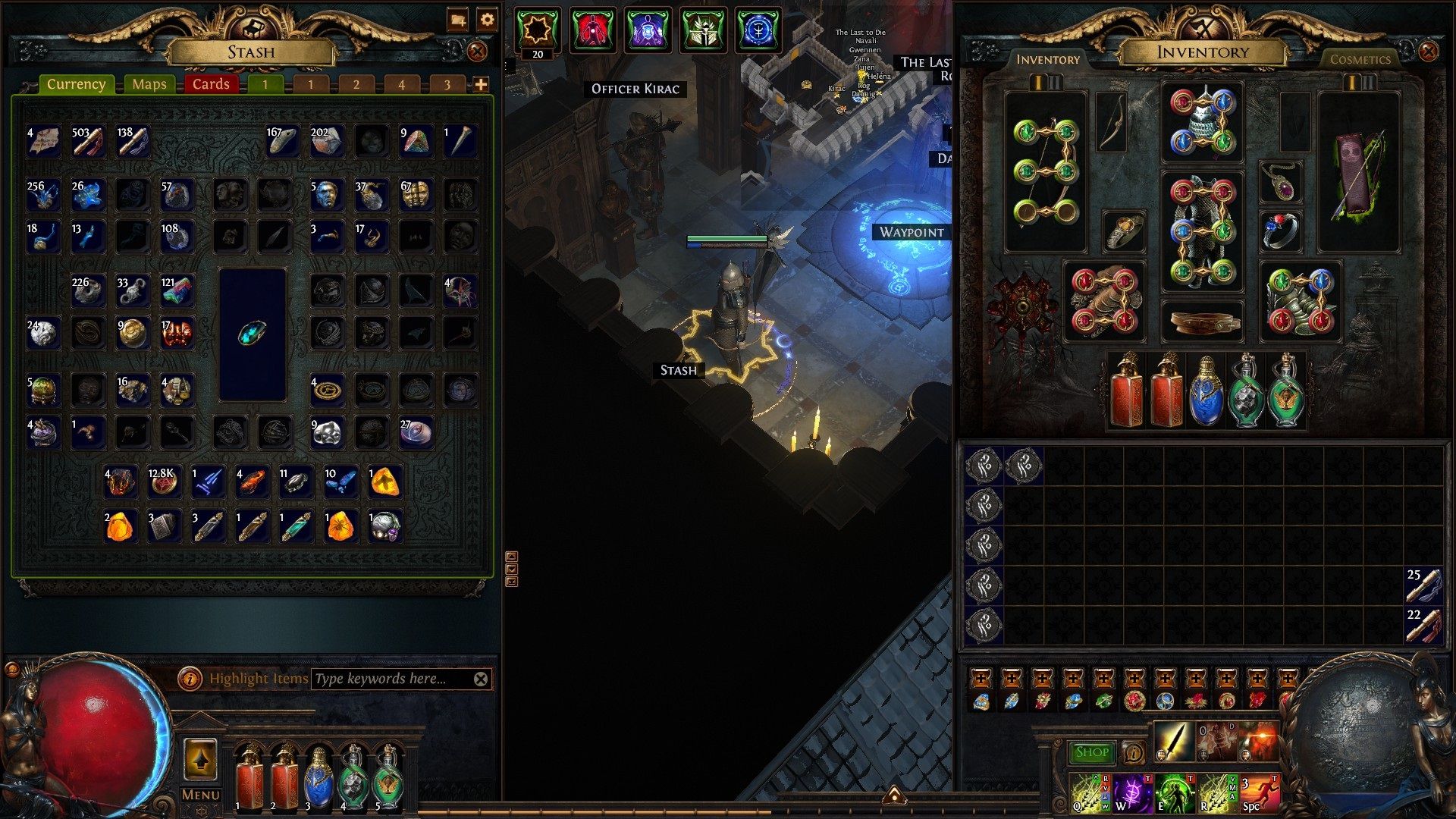 That single run netted me 4 more Garden maps to run. After a few more runs I was up to six. At that point, I was preparing a few at a time and then just running them back to back. More times than not I was getting at least one Garden map to replace the one I used. Making it a sustainable farm for a while at least.

The whole point of running the Garden map was for the Porcupine division card. You needed six in total per turn-in. I was hoping to get many dozens of them by now. That way I could have a few bows to play around with and not worry if I bricked one.

While there are not many other division cards in the loot table for the Garden map. Some appear to be much more common. How common you must be wondering? Almost every run I would get an Emperor’s Luck division card to drop. It is not the drop I’m looking for. Sometimes the Emperor’s division card would drop with one of the cards in the loot table. Still not the one I’m looking for.

Most times however it was just by itself. Over and over again for around the twenty or so runs, I did of the garden map.

With it being that rare and needed at least six per turn in things were feeling quite hopeless. While I was willing it give it that day it was going to be my last day chasing after this one. Gear and character-wise I’m not set up for increasing my drops to target something this hard to get.

I had run down the latest batch of Garden maps in my inventory. I had just one remaining when I noticed I had skipped over a patch in the starting area of some possible monsters in the map I was in. The in-game map showed there were still over 50 monsters left to kill.

While it was tempting to skip over having to run back to zone in just to kill a few monsters. With plans to just run my last map for the night before calling it. I had noticed I had yet to loot a Garden map to replace the one I was running; so, I said to heck with it maybe they will drop one. 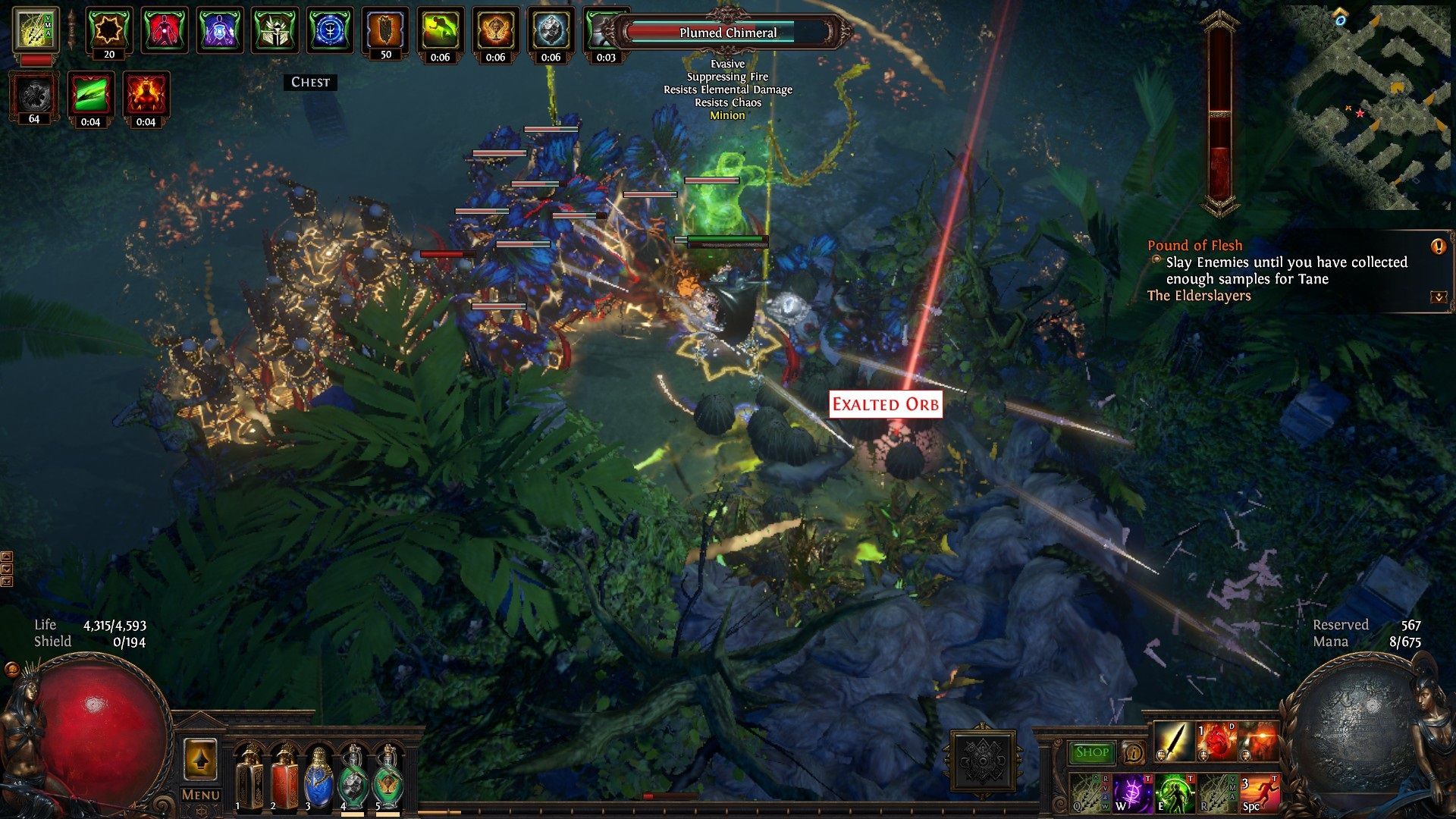 While I did loot another Garden map on my way to the last pocket of monsters. I was not expecting this to drop. My first Exalted Orb for the league. While the end game bow I want will cost over eight Exalted Orbs. This would at least be a good start in getting a much-needed bow upgrade.

I thought I would check the market to see if there were any middle ranged bows up for sale. Sure enough, there was one discounted just enough that I barely had enough currency to buy it. I doubled checked that along with my Exalted Orb I had enough Chaos Orbs to cover the ~1.5 Exalted costs of the bow.

Now Path of Exile is not like any modern-day game when it comes to player trading. It is after all quite an aging game. When you want to search for what is for sale you have to do so on the Path of Exile website. This is not an internal game function.

Once you find an item you want there or if you are a really old school on the forms or trade chat if those are still things. You have to contact the player and make an arrangement for trading with each other. This usually involves the buyer traveling to the seller's hideout and then you make the trade.

I sent the message to make the purchase and nothing. This is not unusual as most players are busy running maps or maybe even harder content where they can’t just portal out and invite you to their hideout for trade. Sometimes not even able to reply as they don’t want to risk getting killed.

I waited a couple of moments. I then got the message I did not want to hear back but they were at least kind in letting me know. The item had just sold. The trade was going down while I was waiting to get a reply. If that other player did not purchase for whatever reason it would have been mine.

While it would have been nice to have a new bow that is not how this story ends for today. The good news is I found out the guy was trying to sell the bow at a much higher price for a few hours before discounting it down a bit to a price I could afford.

Now armed with currency to get a decent bow upgrade I’ve been keeping my eye on the market. I’ve noticed some listed bows are slowly getting discounted over time by the sellers. While they are nowhere near what I want they would be more than enough for some time if I get my hands on one. Many of them are over double what I was looking to pay. Perhaps within a day, they will decrease even further in price. 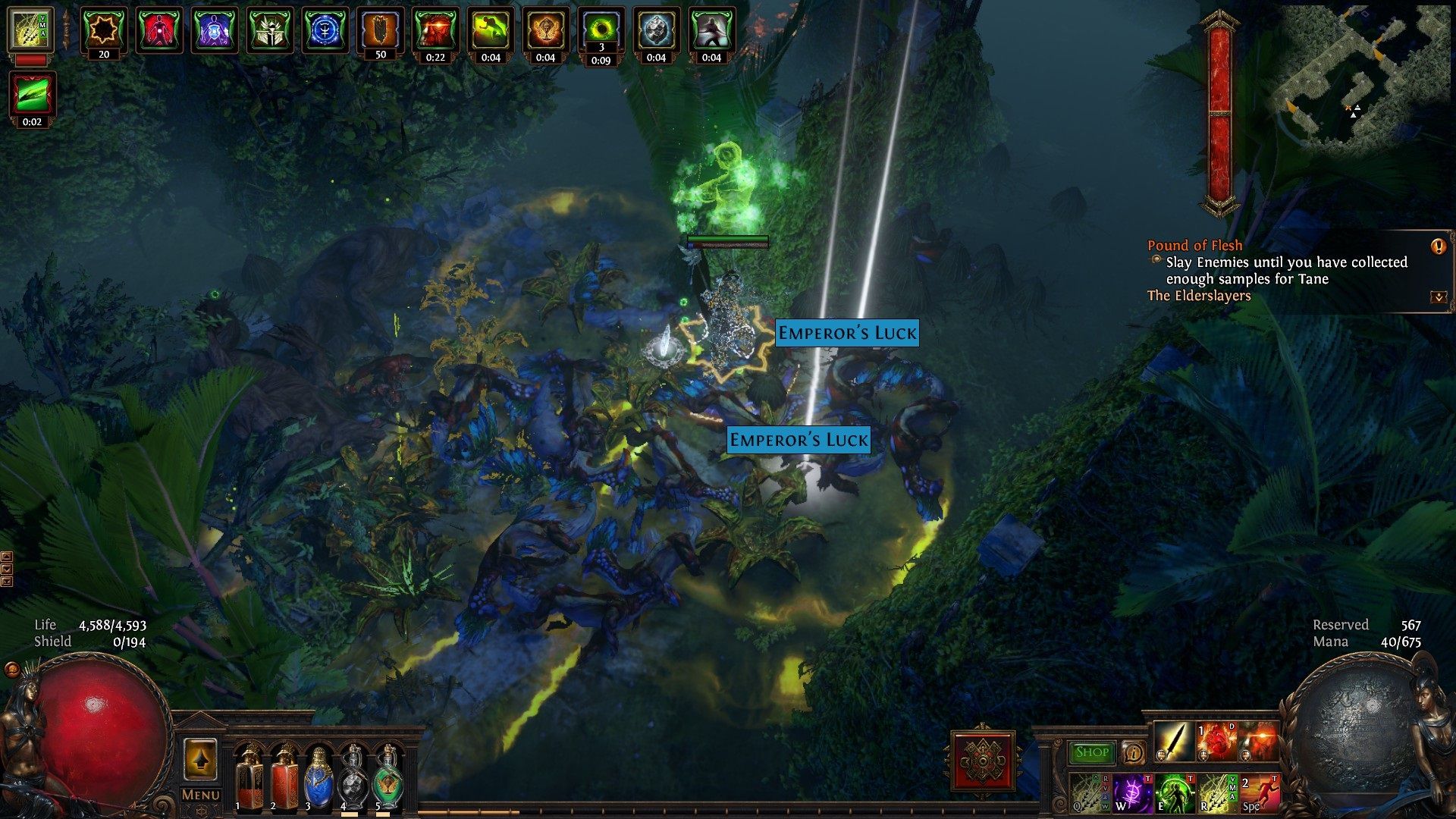 Not wanting to leave things undone I went running that last Garden map I had set up for the night. You would not believe it. The universe has appeared to taunt me back with a double drop of Emperor’s Luck. I think that tells me all I need to know about trying to chase for the division card that just won’t drop. While I’m not the biggest believer in fate it almost seemed like something was guiding me down a path. That path just happened to not end with me getting the bow I wanted at the time. I wonder what the story of the unknown player who got the bow instead of me is. Perhaps this is not the end of the story in me getting a decent bow upgrade from the series of events that have occurred so far.

All I do know is I’m done running Garden maps. It’s time to progress further along in the Atlas map and find many more adventures. I also want to do more Heists and I have maxed out my sulfur for Delve mine runs so I need to get after that as well.