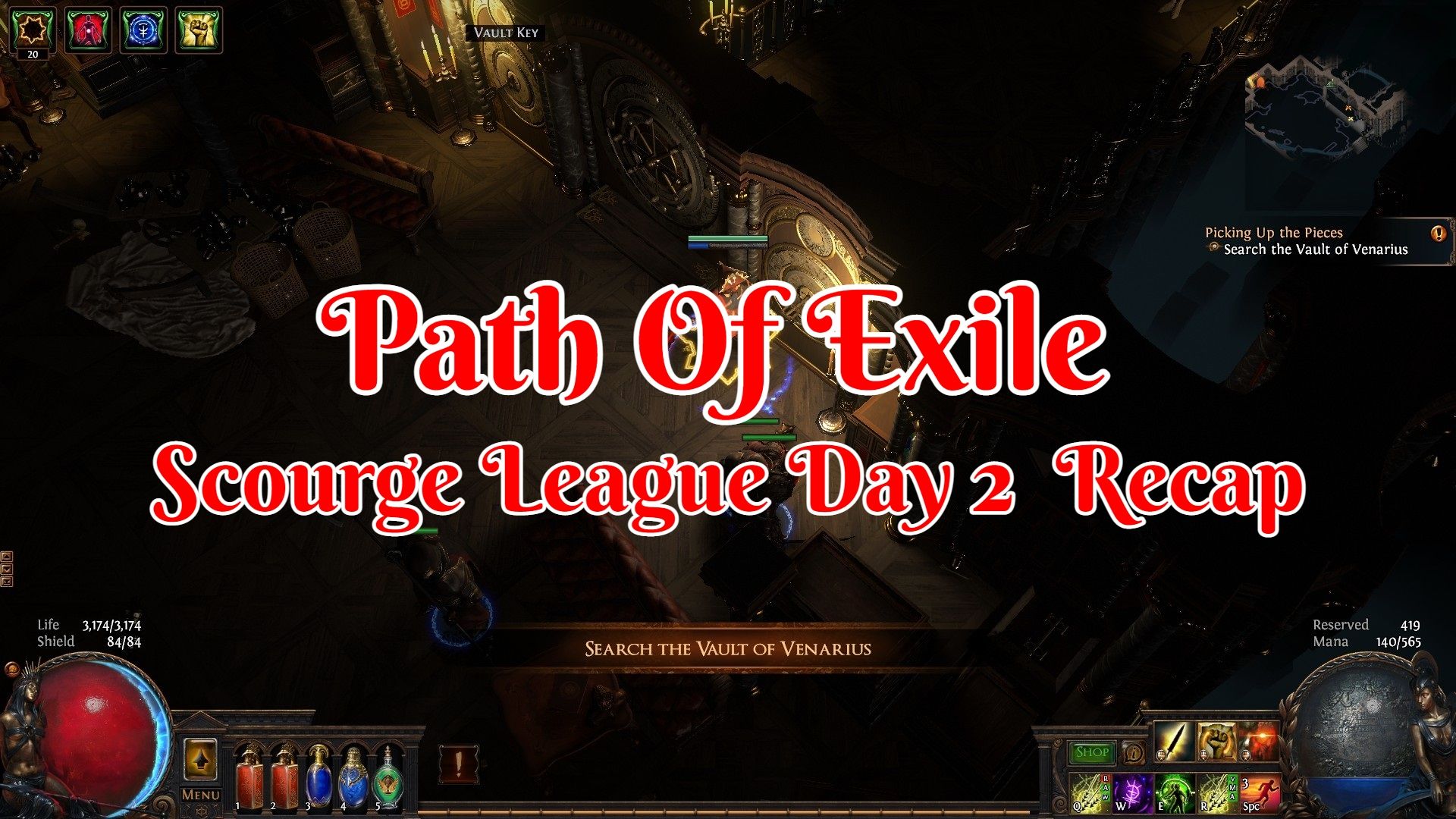 Day 2 of Scourge league ended up going a lot smoother than day 1 did after I got past act 6 of the game. I also got some decent sleep going into the weekend so I was refreshed and ready to take on the league for a second day. It’s always great when you can finish the day completing the goal you had set for yourself. This act for me has always been nothing short of a challenge. I knew heading into it I would die many times over a fiery death. My fire resistance was negative at the time and it was time to face the music for not attempting to do anything about that.

I at least had one good thing going for when I hit act 6. I was over-leveled by three levels. This made things at least a little easier to brute force my way through them. This also meant I could just zip through zones the best I could and not worry too much about experience at least for the time being.

I did my best to stay away from fire totems and many other things that you tend to find in the first couple of areas in this act. Needless to say, they sure found me and I died quite a few times. With this being standard I knew I could just press forward and once I got over this act things would be a lot better. 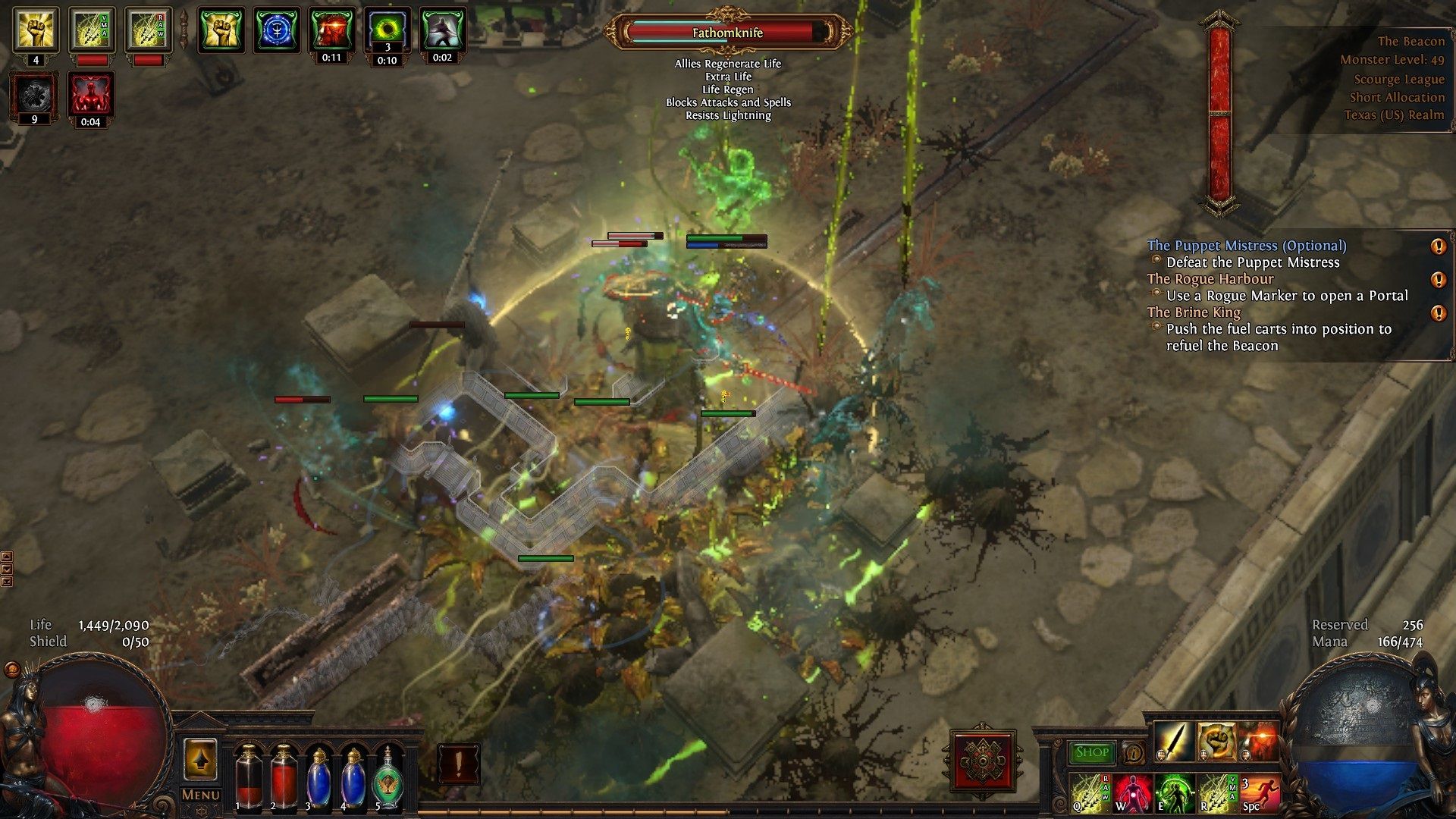 I ended up skipping over some of the optional side quests for the time being. Sometimes it’s just best to leave things be when you know your gear is not up for it. I would later return and finish them off with ease.

Before I knew it the end of Act 6’s boss was dead. This act could have been a lot worse but I managed to rush through it as quickly as I could. Not a place I’m looking to return to if ever. 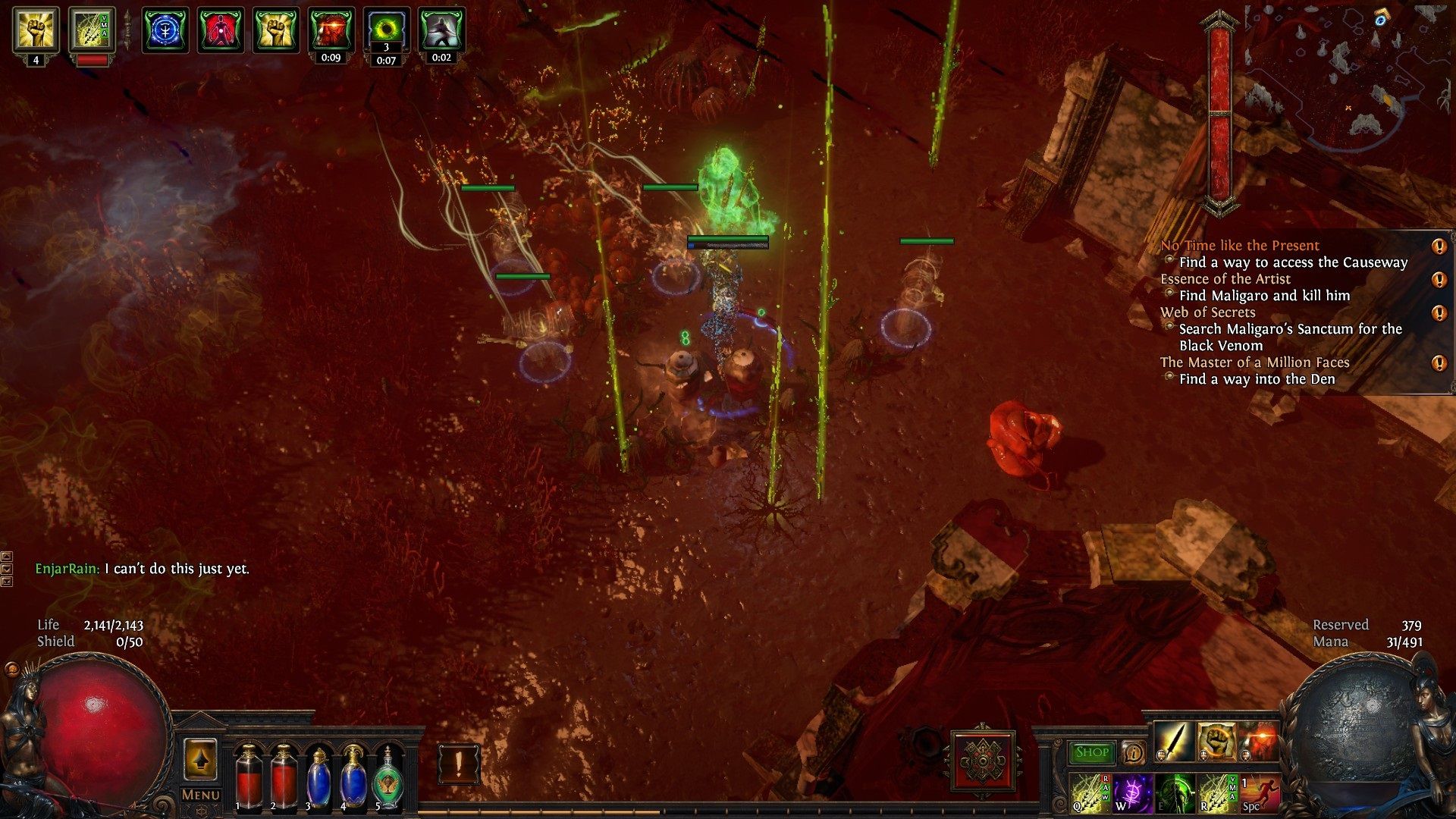 Act 7 always feels like a quick one to run. I don’t know if it was just me somehow being ahead in levels of the zones or if I’ve run it enough that I could almost run it in my sleep.

This act was quite uneventful unlike act 6. Other than the end of the act boss pulled one over me and got a kill. Everything else was easy. I did not find any new gear to wear. No new skill gems to fuss around with. It was rather unmemorable. This act always makes me feel just dirty. Like you need a shower after running through it. The first section you are running through after the main town is a sewer system. The tight spaces made my toxic arrow add to the unappealing look of this place. I assure you it was not that bad. I’m just glad there is no such thing as smell-o –vision in this game. This is also an act I always waste way too much time on the side questing on. I always get halfway up to where I placed the red X at on the map. From there it’s not much further to pick up the last remaining main quest item before fighting and moving onward.

Instead of just doing that. I heard all the way east and back down till almost reaching the town. I then spend way too much time fussing around in a zone trying to find a quest loot and the NPC in a pocket zone that triggers a fight. You would think I would have learned my lesson by now and just picked up the teleport to it the shorter route.

I at least got some decent experience while clearing and picking up waypoint portals to many zones I hardly spent any time in. I am one of those players that will go back once I finished act 10 and make sure I have every single waypoint and side quest completed. As such it’s just quicker to do them when I can while I’m there. This is another quick feeling act. I have in the past struggled here if you somehow rush through clicking on a quest and don’t get a needed quest item. Resulting in you wasting a lot of time trying to work out how to get said item when you just needed to speak to another NPC.

It just feels like most of your time in this act is spent in two zones. Everything else is rather quick or side areas connect to those two zones. I rather enjoy it like that going into a zone finishing off quite a few quest objects and heading back to town for some turn-ins before rushing across a couple of zones to get to your next place. 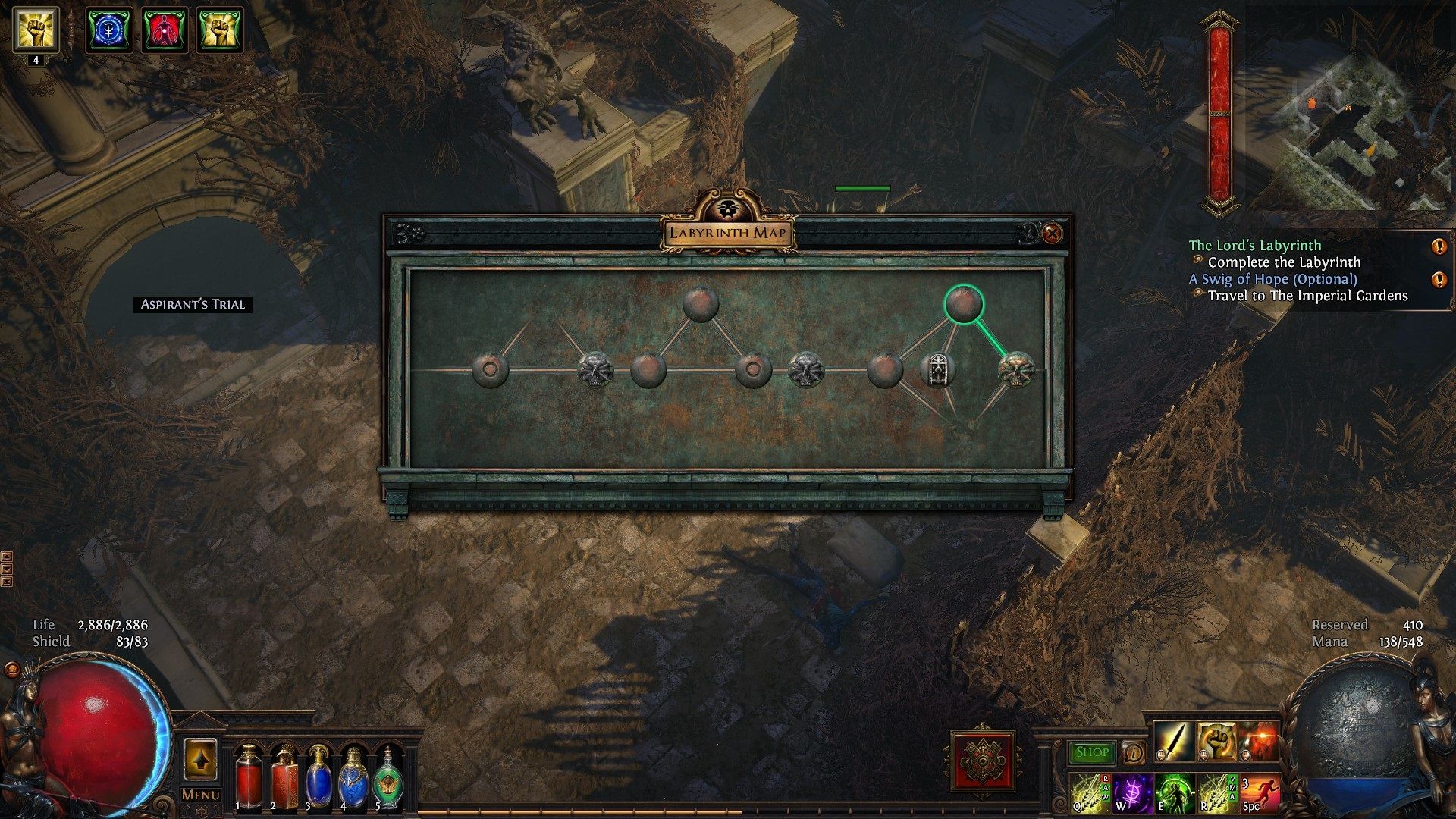 The second lab as we tend to call it is quite an important one for the Toxic Rain build. Once you finish it you can unlock your second set of ascending points. Which if you picked correctly in the first one should lead you to get Fortification.

Fortification appears to have changed a bit since I’ve last played. It now comes in a stack of up to 20. The passive I pick up from doing this lab granted me a full-stack permanently. This reduces damage taken by 20% and is a requirement for some of the early passives in the champion tree I had to gain full benefits from them.

I have never been one to try and rush doing my labyrinth runs as soon as you can do them. If you die you have to start over from the start. Every hour the configuration of the labyrinth changes so if you do die as long as you are not on the hardcore mode you tend to have some time to know what the layout is to attempt again before it changes.

Zero deaths for me this time around. I did end up messing up on one of the mini fights inside. I had a little too much damage from being over-leveled which is a risk. As such, I took the guy down to around 50% life from my area of effect damage before killing a totem. As a result, the boss’s final form in the last room you encounter him ended up reducing my elemental resistance if I recall. Which for me is not a good thing since that is the major weakness in the gear I had at the time. It was still an easy fight. Since I had not played PoE in quite some time there were either some changes made while I was away or perhaps they were made right before I took a break. In my mind, I was ready for some things that ended up not happening or frankly being much shorter and easier than I was expecting in act 10.

I also did not need to take a break and grind out a few levels as I have in past leagues. While there are some decent leveling areas I did not feel like it was needed. I was finally trailing the zones level and not being that bad off for it. Despite not having that great of gear I was mostly renitent at this point on the gem skills I was using. 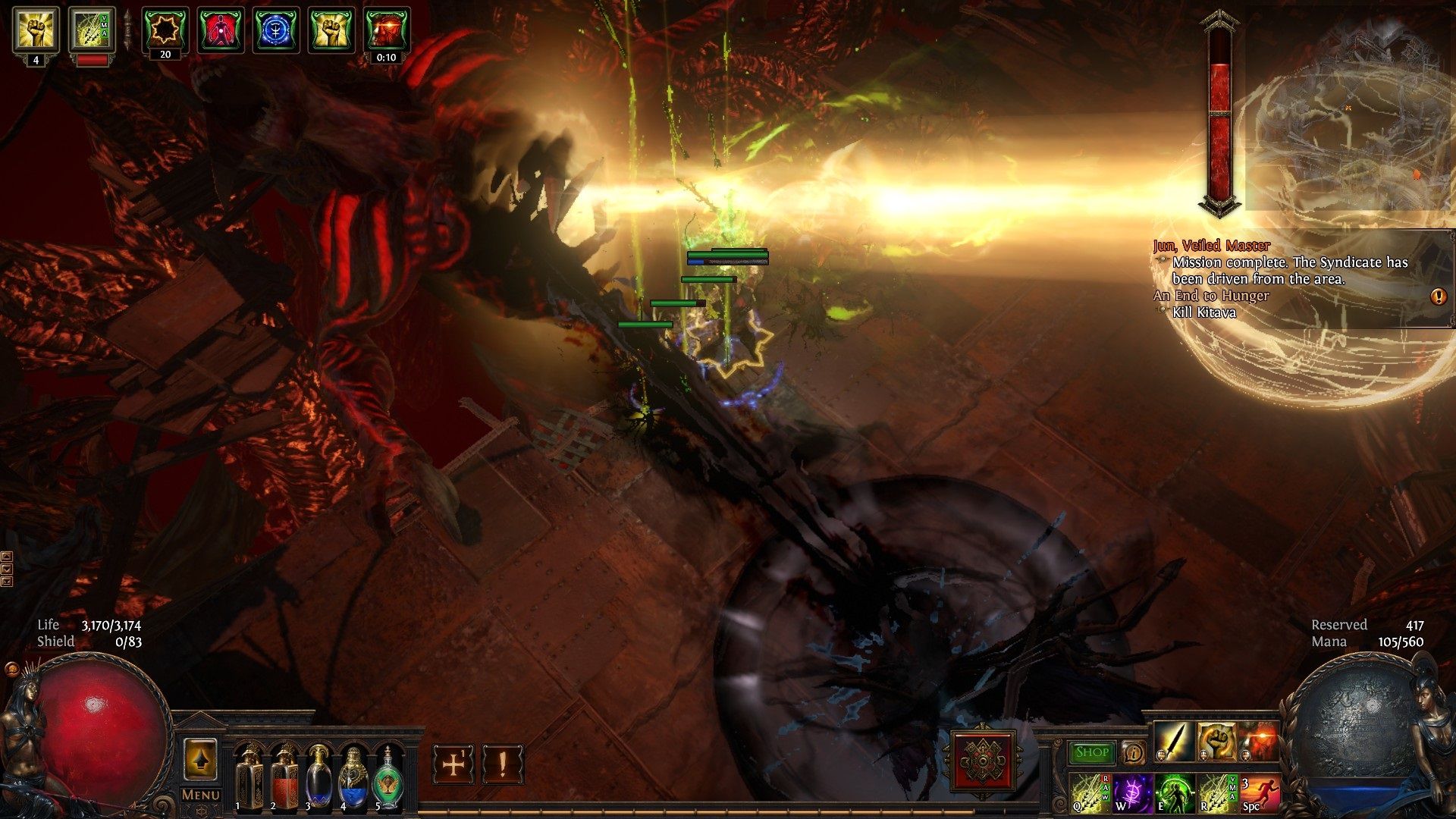 While I did die twice it was not as bad as I was expecting. I was quite tanky and could take on a full hit. I also had a decent amount of damage that the add spawning phases were no issue for me whatsoever.

The final takedown. There was some light questing after this before hitting maps. Which I forgot about. Leaving me in a moment of wtf I just want to start running maps. That part I’ll just skip over as it’s onto the main show. The thing I lust for the most in this game and it was finally time to get reacquainted with the Atlas. A lot of changes have occurred over the years to the mapping system and I’m willing to admit I am not in the loop about them. If I recall I quit around the time some big changes were being made and I’m sure there will be a bit of a learning curve.

To finish off the night I went and ran eight maps. I had looted a couple in a chest back in act 10. You also get one to get you started. That is where it was time to pay the price for lagging behind and not keeping up with my gear, life, skill gems, sockets, and resistance.

I got my butt handed to me quite a few times over in tier 1 maps. This I was rather expecting. You can reenter a map six times before all the portals back to it are closed. In some cases, I was down to my last portal before finishing on a couple of occasions.

This is also where all the past leagues in the game that got added to the core version of the game show up. I ended up getting killed a few times trying out some things I was not around to enjoy during their heyday. Some of them I think I’ll leave alone for now till I get better gear.

Luck was sadly not on my side. I only ran eight maps before calling it a night. I only found one other map while running them. I’m hoping I just had a rough start and this is not a foreshadowing of how the rest of this league is going to go. Thankfully I can buy a couple each day from a vendor. Which at this point I’ll be needing to do. It feels great reaching the Atlas for map running at the end of the second night. This is where I was hoping to be. It will need to be spending some time trading with other players to get much better gear. My resistance is quite bad and I could use more life. Something I would worry about on my third day.