I had a few Tier 3 towers to run for a bit of practice before I step things up. This gave me some time for further things to sell and for me to source more of what I’ll need. I also got quite a feel for the layout of the Tower map. Finally, I got to particle a bit of the setup on the cheaper side of things before I start ramping things up even further. For those who are not in the know, it is possible to unlock one additional slot on the Atlas map device by completing the Domain of Timeless Conflict. This will allow me to run one more scarab or something else on the map. I’m not sure if I have ever done this before I at least did not recall and had to look up the requirements.

I decided to leave this up to my champion to do. I did not know how the whole event thing even worked out so my rewards were quite bad. I was not expecting to recover the 150 Chaos total spent on the 4 different timeless emblems I bought. 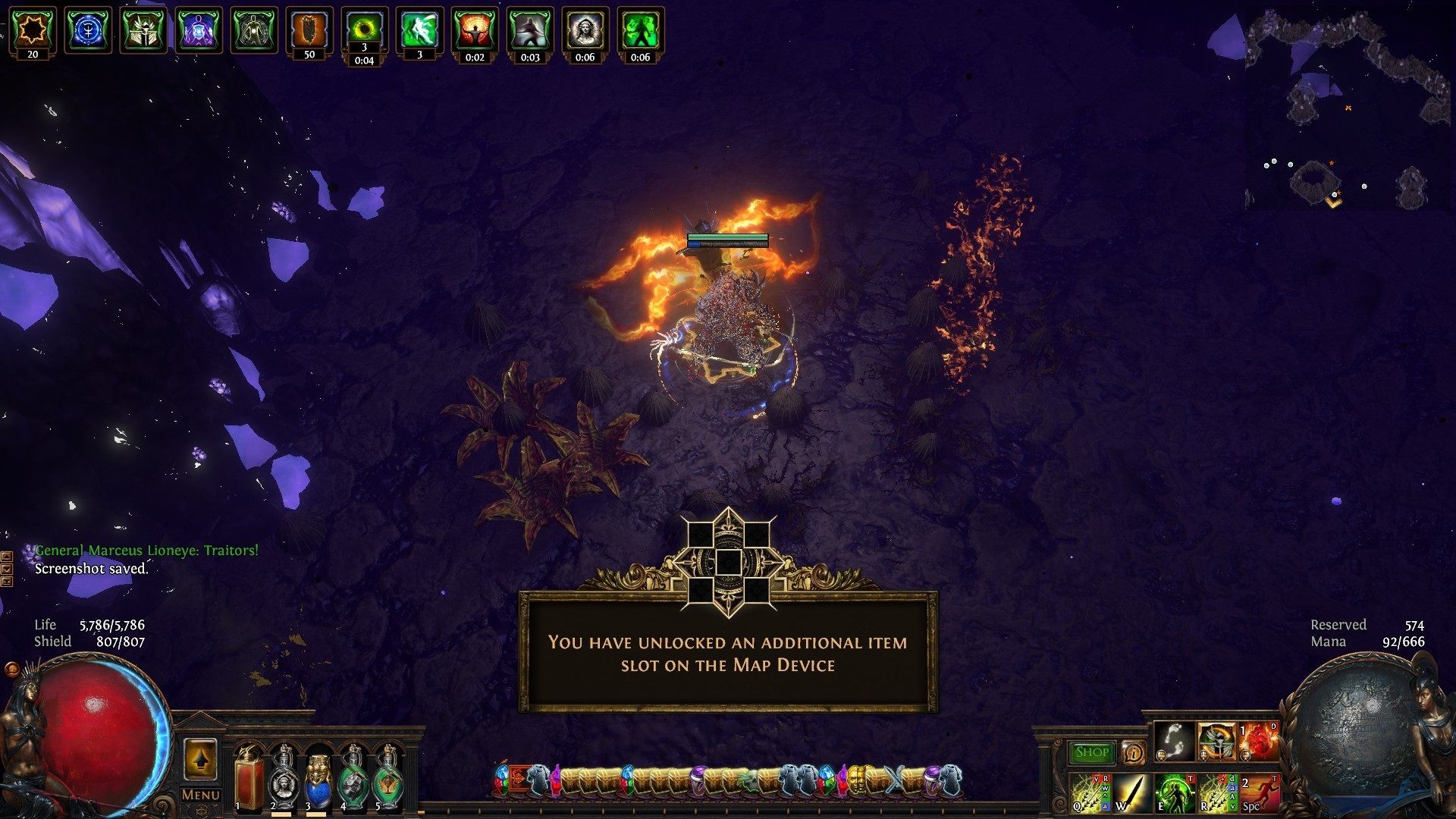 Thankfully it was rather easy. I just ran around until the timer reached zero killing monsters. I mostly focused on what was highlighted on the map. After I killed everything and ran around the whole zone a few times I figured out I could stand in the middle and get another wave to spawn in.

I could have gone afk in there and nothing would have been able to kill my champion. I was just face tanking the bosses or whatever they were. They never even got past my energy shield even once. If it was not for the cost I’d send the ranger in to see what kind of rewards she could pull out of it. The nice benefit of running a bunch of the cheaper lower tier of this map is trying to learn how I want to set myself up inside it. There is a lot more than just running from the start of the map till I get to the boss and teleporting out to run another one.

While some of these runs I did invest a little bit into using scarabs, sacrifice fragments, and buying a modifier. Many of them I also did not. I do have quite the bulk of many things I’ve been saving up. I’ll save any of the really good stuff that I did not sell for the higher tiers. For now, I don’t mind burning some of the 1 to 2 chaos items to see the impact. 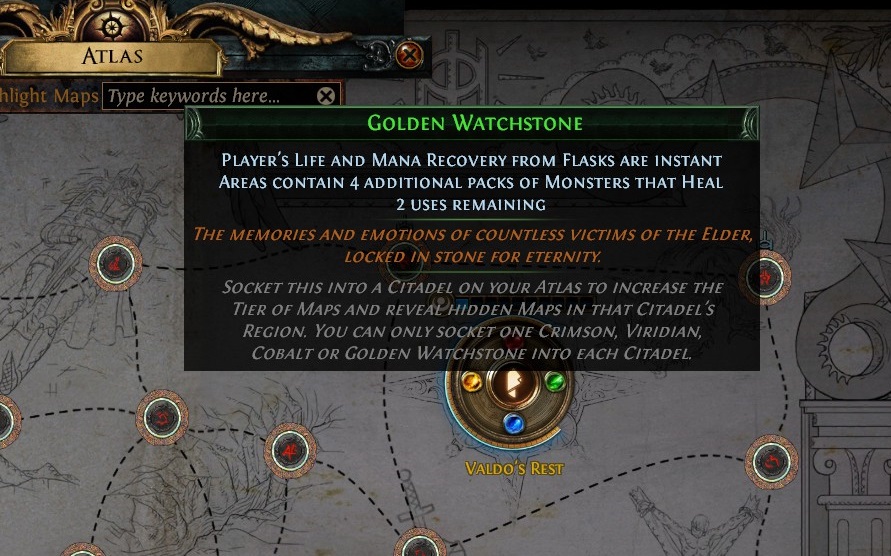 What I did always do is make sure I get into the habit of running maps always with four sextant modifiers. I was not that pickle anything that added packs of monsters to the map I was fine with. With all the ones I used I still have 250 Simple Sextants remaining and I’m saving the better ones for the higher tier runs.

There was also rolling of all the maps. Since these only tier 3 maps I was running for the day I did not want to spend too much on rerolling each one over and over again trying to get a high pack size modifier. Anything that looked decent, chisel, and alchemy used were good enough.

When I did have a few Tower tier 3 maps I experimented with Vaaling a few of them. In the process, I lost a few since they upgraded to a higher tier among other things. I also have a Watchstones that I’ve rolled modifiers for unidentified maps when that would occur. Those were usually the maps I spent a little extra on adding in scarabs and whatnot as well. The main goal of these runs however was trying to get to 300 stacks of the debuff for Scourge. This meant I would have to be entering Nightmare a couple of timers per Tower floor. As I was trying to take advantage of the extra pack of monsters that can spawn up to 10 times per map when you do this.

More times than not I got up to the 250-280’s. A couple of times if I recall I hit 300 right at the end. While that is not ideal I’ve gotten the hang of playing this way now. The higher tier maps with a lot more modifiers should not be much of an issue to get to 300. While I was hoping to make a fair bit of currency to help fund everything else I need to acquire. For the most part, I was just breaking even on my cost per map. The item I’m farming for is The Nurse divination card. I had two of them drop on the same floor in a single map and that was all I got for the day.

The other big part was trying to work out how I wanted to handle the loot situation. A few runs I tried looting as I was going the best I could. It felt like that added too much time that I was losing my Headhunter buffs. So I ended up walking through the entire map once I was done and looting everything.

This also gave me a little time to better understand the kind of loot that was dropping. While the loot filter I have should more than make it known that a pricy item dropped. There were a lot of drops I don’t recall ever seeing before that I checked out the prices on so I know if I should loot them or not. Just for fun, I disable my item filter just to see what else was all dropping. This was before I had my new rings. I also don’t think I was running much on this map anyways. So the higher tier stuff when I’m spending a lot is going to get insane in just the volume of stuff dropping. I’m so thankful for item filters in this game. 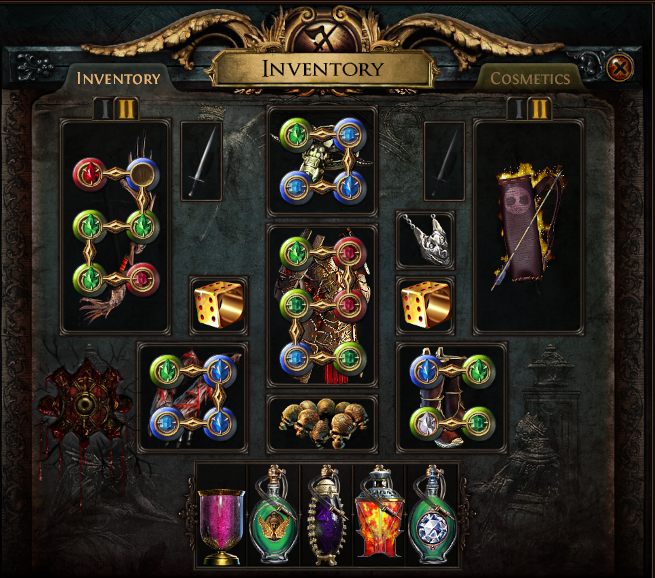 There are quite a few things I’m still working on getting. While I was hoping to have better luck on drops today from Tower runs on the ranger. It looks like I might have to do some more farming on my champion. I’m however out of all the guardian maps and maven inventions so it is a bit of an investment to get back into it.

I would prefer a quiver with a higher life roll. With all the stats I also need on it those are going for 10+ exalts.

4 magic quality Watchstones with 4% increased effect of modifiers on non-unique maps. They are going for an exalt each. While there are others I could be going for I’m going to give these a try first when I get them.

Maybe one day I’ll switch over to using unique Watchstones for some insane things. However, I don’t have the kind of bankroll to be upping my cost per map to something silly like 1 Exalt per map.

The lightning arrow hits 2 additional enemies enchant on my helm. I have 47 Offerings to the Goddess and I’m hoping I can just do a bunch of runs on my Champion and get it along with a glove and boot enchant on my gear as well. That would be a bit too much for the ranger to try and run.

7 more Orb of Unmaking for 84 chaos total. I might end up getting more if I go back to guardian farming. I’m also holding off on changing my Uncharted Realms Atlas passives till I’m certain I won’t be needing Guardian’s Aid and Remnants of the past for farming on my Champion.

A nice phat stack of chaos for buying the modifier I need on the Atlas device at 5 Chaos per map run.

My stack of tower tier 10 is quite tiny. I think last week before I fully understood what I was going to even run I was selling these. Once I knew I was going to be using them I started saving. I’m somewhat glad I sold when I did. It looks like the price has dropped quite a bit as farmers start selling their bulk.

There are a few different kinds of scarabs I need to pick up in bulk. I have not yet looked at pricing between the different qualities for each one to see where it make sense with whatever bankroll I have to be spending. I more than likely will be looking to run Elder, Harbinger, Divination, and Cartography to get started.

Some slightly better-rolled flasks for the two magic quality ones I have. Maybe I’ll end up making some changes and going for something different at some point.

Leveling up some more to get life and damage passives.

While that seems like a lot of stuff and it is. I at least got a lot of the core stuff so I could enjoy trying out lower tier of maps and gaining more experience on the ranger as well. My quantity and rarity modifiers I hope are decent. Getting them a tad better costs an insane amount more. I almost ended the day with zero exalts and chaos. I ended up scaling some currency before logging out just so I have something to work with when I get back in. Hopefully, I can earn the rest I need on the ranger with items I already have for sale. Otherwise, I might switch back to the Champion for a little while.