An attempt was made at doing tier 10 Tower in Path of Exile with a Headhunter and high magic find. I ended up learning quite a lot. The plan then was to try tier 6 Tower and see if those would be more plausible.

For those that have yet to check out the last update, I gave Tower tier 3 a try. Spoilers I ended up looting 2 Nurse cards from those runs making it a profitable day. The plan was to try out tier 10 and hopefully keep getting Nurse card drops to cover my expenses. Before going out and buying up a bunch of Tier 10 maps since they can be a bit pricy. I had one sitting in my map tabs I thought I would try out first. Depending on how that went I would go out and buy more or a bunch of tier 6 instead.

This was no longer going to be a dry run either like the past days had been. I loaded up the map device with Reliquary, Harbinger, Cartography, and Divination scrubs. I opted to go for mostly rusted versions of the scarabs expected for gilded cartography.

While it was tempting to go for higher Divination ones for double the drop chance at getting divination cards. They were something like 5 times more expensive to buy. I had yet to have that kind of bankroll so I thought I would work my way up to spending that much per map run.

This was also the point of no turning back. I used what orbs of unmaking I had to give myself some reset points for the Atlas skill tree. I changed out my Uncharted Realms passives so that guarding farming would not be that great anyway. Meaning I would be rather committed to going this farming route unless I wanted to encourage a decent cost to reset them again.

I ran up to the map device and put everything in. I also paid an extra 5 Chaos to add beyond to the map for even more monsters. These monsters are a bit harder to kill. They should however help overall get up to 300 stacks for Nightmare farming Scourge.

I also made sure I had 4 Watchstones in for the Valdo’s West region and they were sextant to add packs of monsters each. After the map opened I removed two of them dropping the regions level down low enough so I could get tier 10 Tower maps to hopefully drop.

I ran into the Tower map and almost instantly died. The first monsters I killed spawned something nasty from the beyond. I ran back in and killed it and processed to move towards the next floor.

On the next floor, I died again and again. I’m starting to think I only have so many more portals left I hope I can make it a few more floors to the end. The issue is with Headhunter you want to go fast and trying to play it safe is more deadly since you would be losing the buff if you wait too long.

After getting through what I was hoping was just a rough patch I almost made it to the last floor. Where I died till I ran out of portals. I had not looted a single thing and it was all a loss.

With how bad that went I thought I would try a lower tier of Tower and then go out to buy more if It went well. 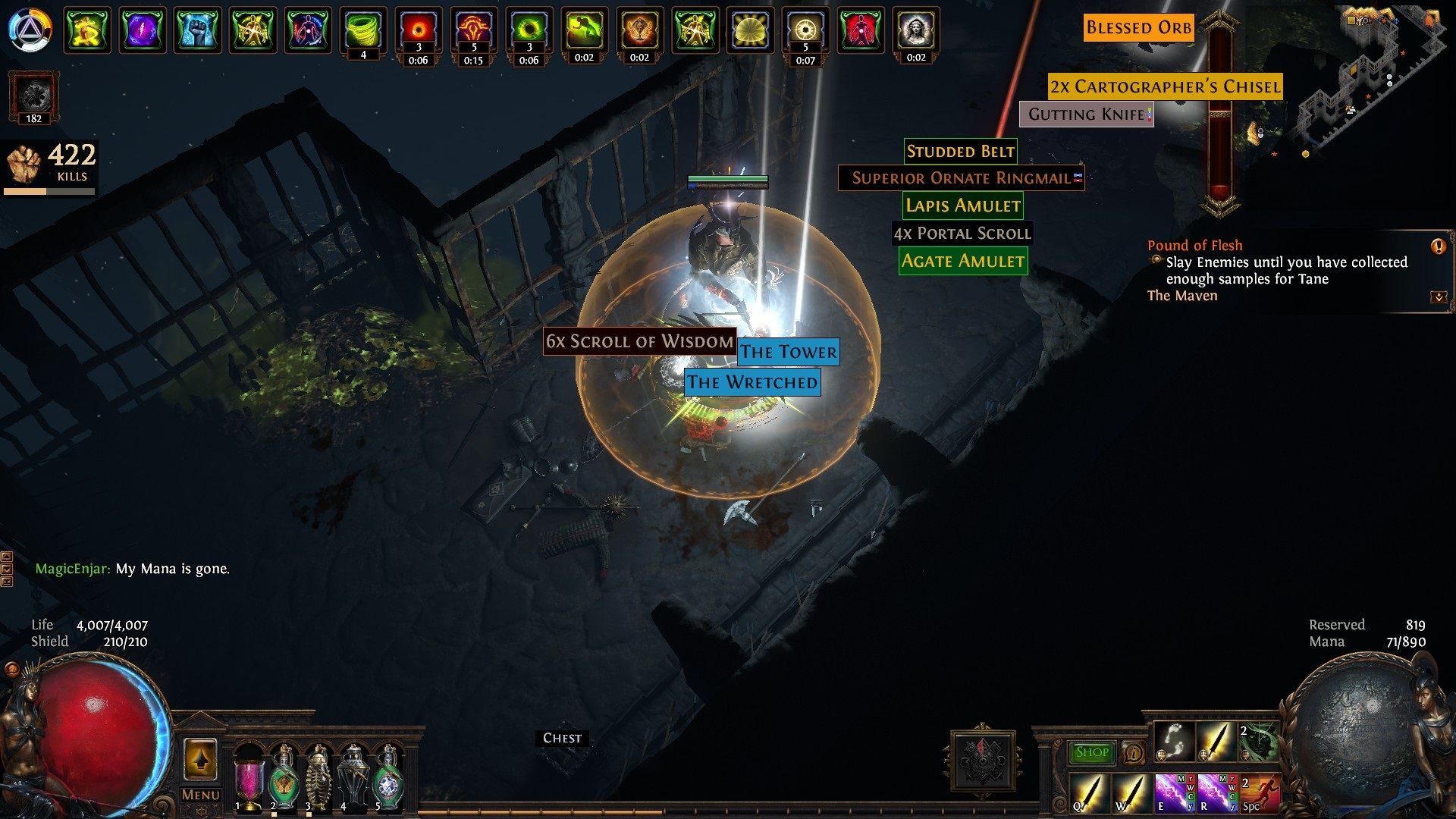 I had two 6 tier towers to run. There was something I learned from my tier 10 run that I would make some changes to the setup I was going. Nothing like getting your behind kicked to learn some things.

One of the things that killed me quite a few times on the Tier 10 Tower was the beyond creatures. While not running it with those would reduce my death rate by a considerable amount. You kind of need them so I was hoping by keeping them in for Tier 6 they would be doubtable. I need a bit more damage to deal with them better.

I also noticed on my Sextant rolls I had landed one that gave both me and the monsters increased physical damage in exchange for three more packs of monsters. Needless to say, that was a mistake and they one-shot me. So I rolled over those for lighting ones if I recall. This works for me since a large portion of my damage is lighting anyways.

I ran the two maps I had for the tier 6 tower. While I did die once or twice. It was more than possible to do. These over the tier 3 Towers have a chance to drop better stuff. So it’s a risk I was willing to take.

I went out and attempted to buy some tier 6 map tower maps along with all the other scarabs I needed to do a few runs. I had around 300 Chaos or 2 Exalt worth to spend. With any luck that would be enough to cover doing it again and making a little extra.

It took quite a while to get all the required supplies. While I tried to buy many things in bulk people never replied for the most part. I can only assume someone had already bought the items. So I was stuck buying one or two at a time. It took many dozens of trades to get everything.

When it came to buying maps I found someone who had a truck ton of them. Since I did not have the currency to buy a lot at once I bought whatever I could afford. The thing I hate about buying maps is the chances of getting unusable corrupted ones. This guy flat out only sold me normal maps so I felt like I got a good deal.

To save some time I mass chiseled and alchemy all the maps I had acquired. I also rerolled a few to remove modifiers I’m looking to avoid or try and land better pack size. I dumped them all into my map stash tab except the one I was going to use first.

I made sure everything was set up. I put the Tower map into the map device along with all the scarabs and made sure to pay extra for beyond. Then I was off to run a bunch of tower maps.

I cleared the first floor without much issue. It seemed a little harder than the last two tiers 6 Towers I had run. I took note of all the mods I had run for the map and would think about them more later on as I suspected I must have rolled something that was giving me trouble.

While I died a few more times. I was able to finish the run. My character at the time had something like 2,500 life and it seemed like I could use a touch more damage. I was hoping this was just some bad luck and the rest of the tier 6 would be much better. What was showing up as highlighted in my map tab however was my tier ten indicating that it had at least one tower map in it. What I did have was nine rolled tier 10 Tower maps. It turns out I kind of getting scammed.

When I bought the ten tower maps I made sure they all were tower maps. I also made sure I was not getting anything like a corrupted I could not run. What I failed to notice was they were tier 10, not the tier 6 I was looking to buy. Tier 10 maps are also like 1 Chaos more so to be fair we both did not get what we were hoping for in the trade. 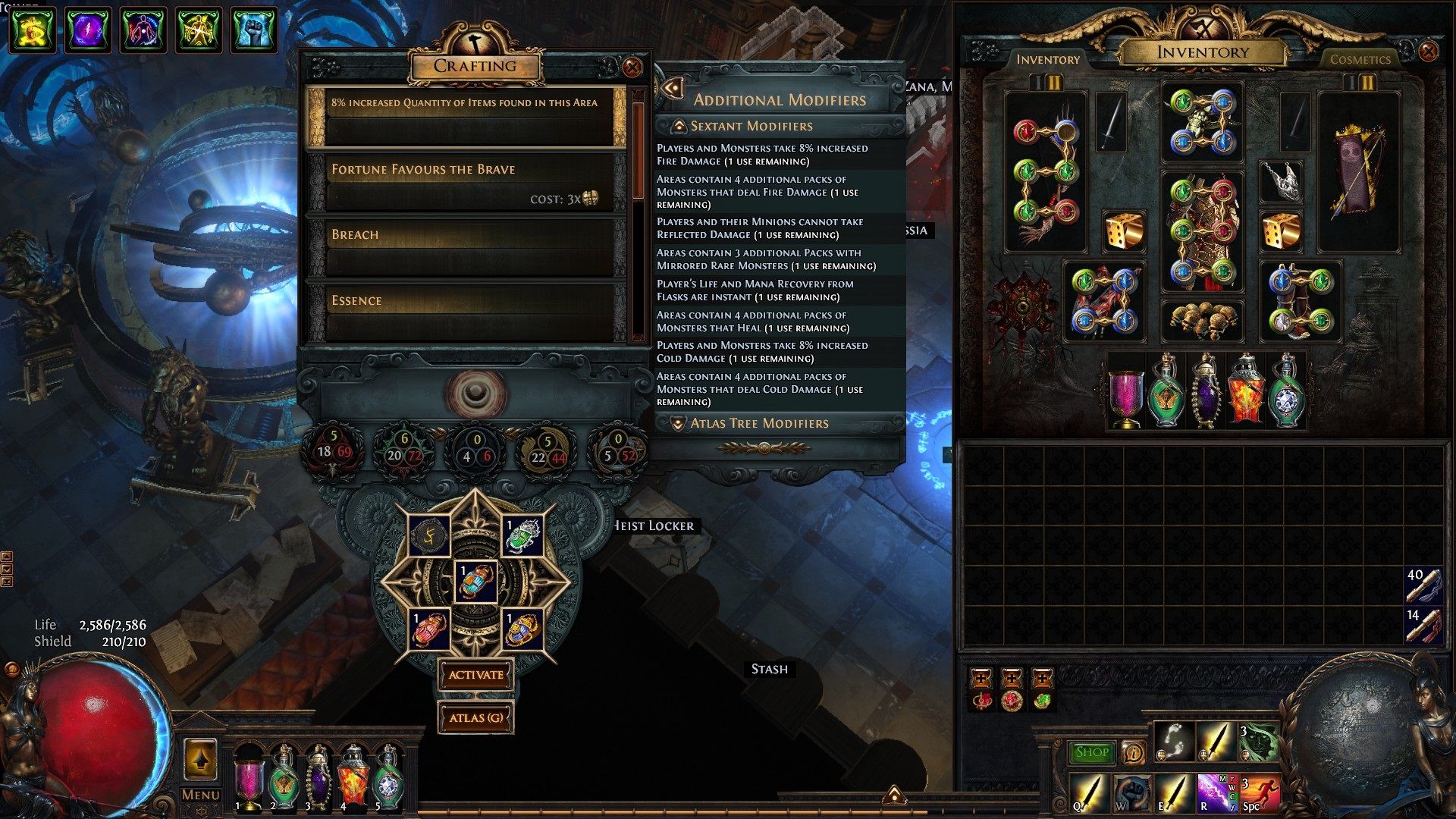 While I could try selling the tier 10 maps and then going out and trying to yet again buy tier 6 maps. I was understandable angry and decided I would give tier 10 another try. I would just make sure some of the harder modifiers for my ranger would not be on any of them.

The remaining nine runs went better than I was expecting. Sure I would sometimes get one where I was down to one portal before finishing and then I would loot hoping I did not miss any beyond monsters that had a chance at killing me.

It turns out to be sold the wrong tier of Tower maps ended up being a good thing. I now more than know I can run tier 10. It’s not as smoothing as I would like but I can get up to 300 Scourge stacks most of the time. The screenshot does not show all of the loot I took. Partway through my runs, I ended up needing some Chaos for purchase so I listed and used up some of the currency. There was also a lot of junk that I did not keep.

The biggest amount of drops I got was The Wretched divination card. They sadly have dropped in price from 3 Chaos down to 2. I’m still trying to sell them at 3 as I could use the 74 Chaos to try and build back to running more Towers again.

Of the items, I looted and kept some of them ranging from 20 Chaos up to 60. Since none of them sold yet I’m not including them in the final total. I’ve had a hard time in this league selling armor and weapons. Anything over a few Chaos even if it’s fairly priced with everything else on the market just won’t move.

In total there was 230 Chaos worth of loot. I spent 305 Chaos. For a grand loss of 75 Chaos. Wait a moment. Did I lose currency? Yep, I had zero Nurse divination card drops. I guess I just had bad luck as I was expecting to get 2 to 4 of them for how many Tower maps I ran for the day. 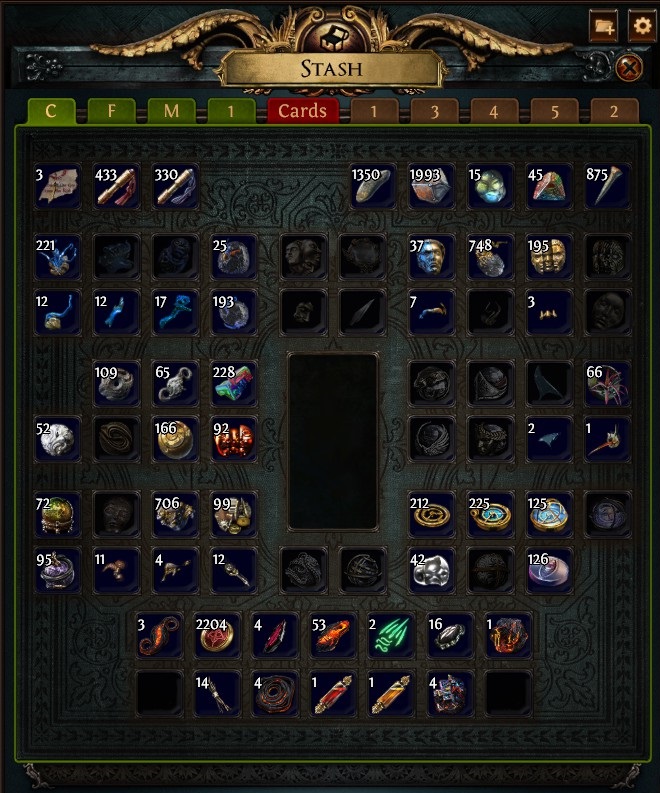 Running these maps took a lot longer than I was expecting. Since I’m both farming the map and the nightmare part of the map that is like running the map twice. Expect I then have to go through everything a third time and loot.

During my runs, it did seem like Path of Exile went down for a moment. I had trouble logging back in and when I did not even four minutes later. My portals were gone. So I lost out on looting an entire map. Hopefully, that was not the one that would have put me into the green. Either way here is hoping I have some better luck in the future trying this again.