Yesterday's loss I’m going to chock it up to having really bad luck. This time around I’m heading back to tier 3 towers and I’ll be upping the stake on them. First, however, I need to raise some funds since I’m quite broke again and most things have not sold. 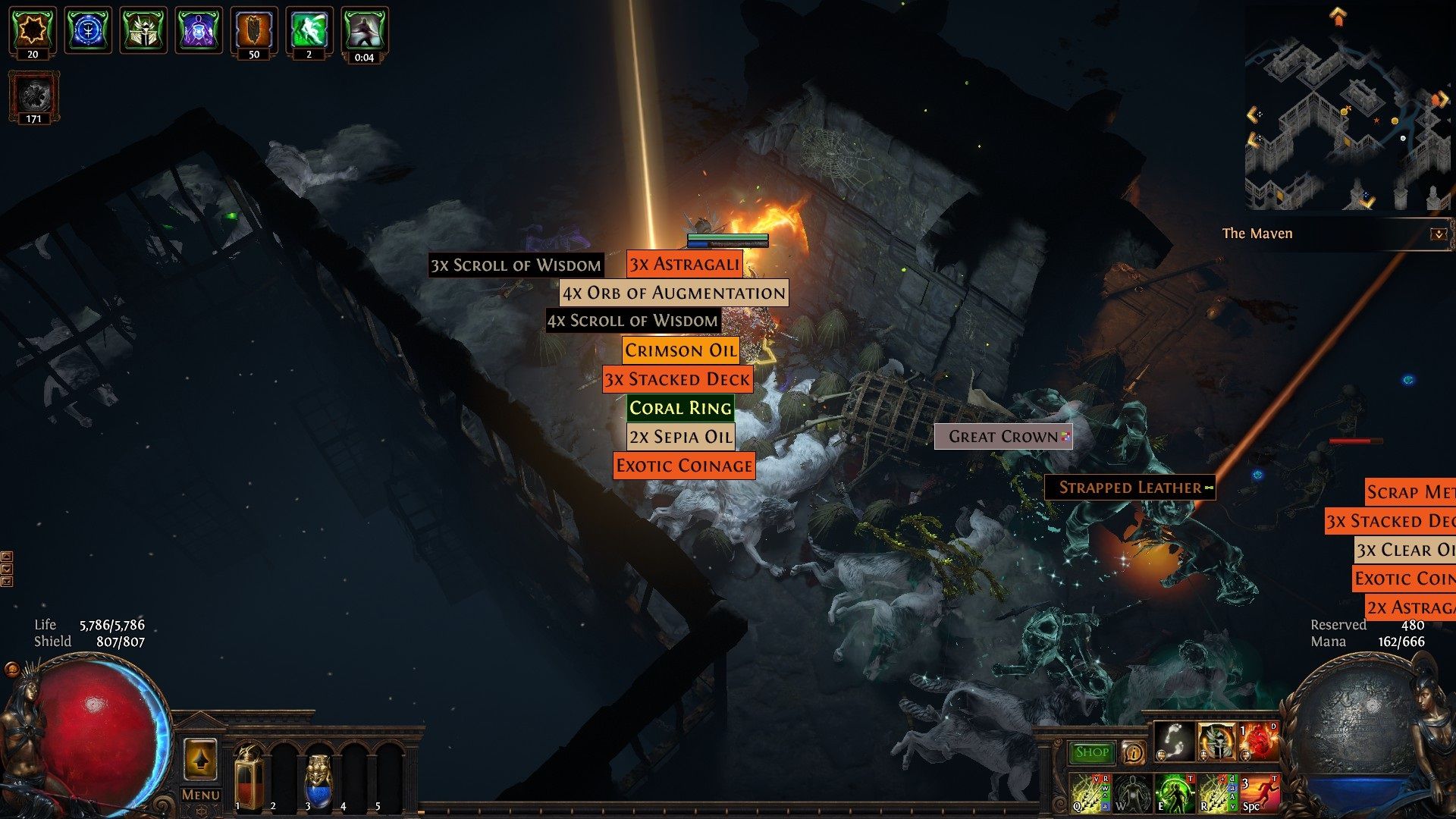 Since I was a bit too broke to even start buying everything I needed I had to find a way to raise some funds first. Thankfully trying to farm for The Nurse and other high-end drops was not my only objective running all the maps I did yesterday. The other thing I was leveling up was Scourge maps to run in hopes of getting some decent drops.

I checked through the ones I had and all of them had landed nasty damage for entering in and out of Nightmare. My ranger was one shot attempting to run one of the easier ones. So I had to do the rest on my champion. While they are all Tower maps I won’t be running them with anything extra since it won’t be on my magic find character.

While most of them were kind of meh one of them landed quite a decent roll for expedition currency and stacked decks drops. This ended up funding a large chunk of my actives for the rest of the day.

In total, I ended up pulling in around 327 Chaos worth of loot out of the couple of maps I had. This is more than I spent yesterday on running maps. So glad I lucked out and this ended up saving me. While I can do higher tier of Tower. I thought I would get some more levels in lower-tier Tower and see if I could increase my health and damage a bit more. I could also run a bit harder things on these maps and not worry about getting killed too many times and not finishing.

Yesterday I was using Simple Sextant. For double the cost and since I already have a bunch anyways I switch over to Prime Sextant. This would mean I would get more pack size out of my rolls giving me more chances at getting something amazing per run.

I was also wrong about the Watchstones I was hoping to buy. They are not 1 Exalt each normally. They are 3 Exalts each. As a result, I picked up the cheapest Valdo’s Rest Watchstones I could find and tried rolling my own. One landed one extra magic pack. For the other three, I got a 2% effect of the modifier. While I want 4% this is at least better than nothing.

I upgraded from using Rusted Divination Scarabs to Polished. While they do give double the chance at 100% than the rusted for divination cards they also cost a lot more. My main reason for doing this was the price of them crashed quite hard and I was getting them for 15 Chaos each instead of 20-25.

I’m also giving Reliquary scarabs one last chance. I think at this lower tier of maps they are no longer worth it. There are some big-ticket items from my understanding that you are never going to get unless you are in tier 6. They were quite a gamble to use anyways and I’d prefer something else in that slot if they are not going to make me some returns.

I’m also going from rusted harbinger to Polished. With Diplomatic Escort in the Valdo’s Rest passive tree gave me a 30% chance for a harbinger boss. This should be giving me one boss per map now on average. Not to mention I have loved them for gaining Blood for Darkness triggering.

Total invested this time around was 555 Chaos. I had a couple of leftover rusted scarabs and got a decent deal on some stuff as well. Otherwise, this would have been a lot more. There were some good, bad, and improvements I need to make. It was at least a lot better than yesterday and that is all one can ask for. Well, that and a heck a lot more Nurse drops. One can only dream.

Thankfully I only had one crash when I went to remove my item filter for the cover screenshot of this post. I can only hope it stays that way moving forward. As that is quite a lame way to end up losing out on all the loot you have acquired.

This time around I deiced to write down in approximant value how much each run was netting me. In my worst run I somehow only pulled in 7 Chaos worth of loot. I needed to average 37 Chaos per run to just break even.

One map tun I had a delirium event at the start. While I was not 100% focused on running it as I would be missing out on running things the way I need to be. I did quite well and the first reward type was currency dropping some delirium orbs.

Along with other stuff in that run, it ended up placing as my second best for the day at 225 Chaos in drops. Funny enough that single run just about covered 50% of my costs for the day. It was also short 5 Chaos to be out my total take form yesterday. What a difference.

I thought that was going to be my best run. Was I mistaken? I’ve started to notice a pattern where you will get a map that drops a lot better loot throughout. So you are not just getting one nice item most of the time you are getting a couple. 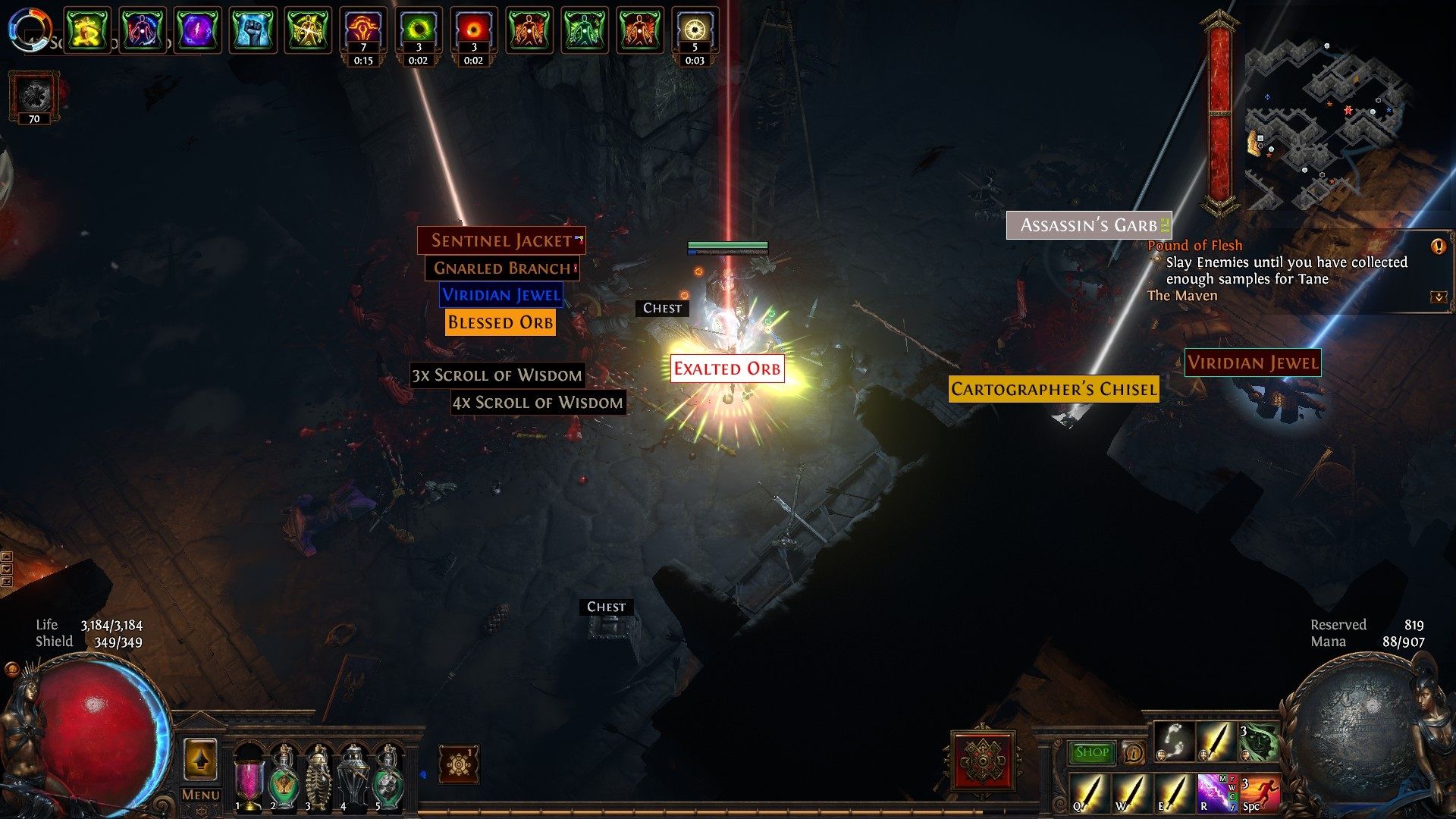 It’s always great to start a run having an Exalt drop on the first floor. That itself would have been more than good enough for that run. Then while I think I was on the second floor of the same run I got a message from someone looking to buy a 40 chaos item. I was thrilled. Then I heard my loot filter make a big item drop sound. I look up and my only The Nurse drop for the day occurred. I looted that and ported out to make a sale.

Along with some other stuff I looted during that run I netted myself 377 Chaos worth of loot. My three biggest runs of 377, 225, and 136 Chaos put me in profit for the day of over 1 Exalt.

I guess they turned the loot back on or something it was quite different than yesterday. My total take was 1250 Chaos in loot. A chunk of this was in things like maps which maybe I’ll get some sale on. Not everything is going to sell or right away.

As far as Reliquary scarabs go I think I’m kicking that one to the waste bin. I might use up what I have remaining and that is it. While I get a lot of unique including jewels they are all worthless. The only thing they seem to be good at finding was 3 Tabula Rasa. I vendor them for Divine Orbs which are worth and sell for 12 Chaos each. Since I had enough of a bankroll for the day I ended up holding onto any loot worth keeping or selling. It was such a vast difference from yesterday. 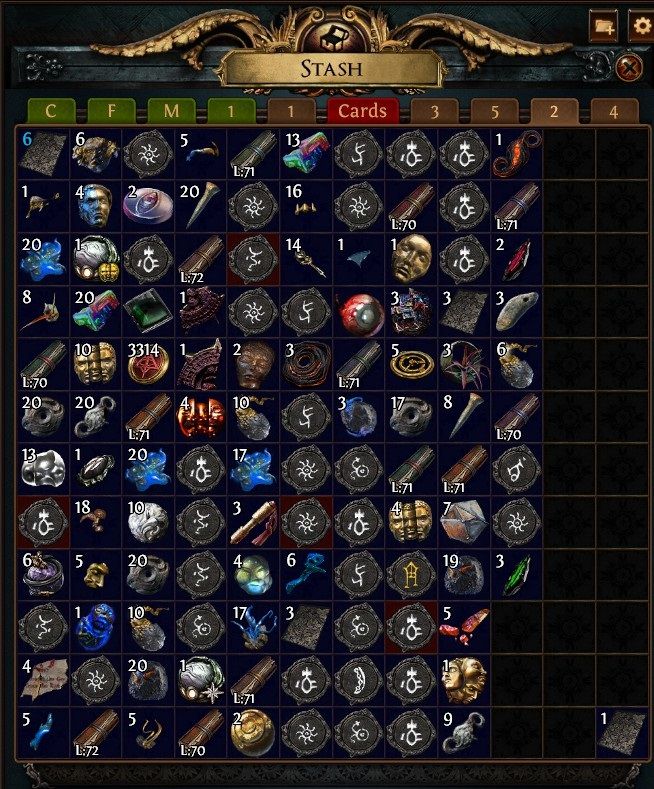 There was so much loot I had to clean out a second stash tab to hold it all.

The only things not included in my 1250 Chaos worth of loot for the day are Heist contracts and Scourge maps. No clue how I’m going to offload the massive trove of Heist contracts I now have stacking up. As far as the Scourge maps themselves I only had one good one and it has 140% reduced movement speed-- ouch. I guess I should check them more often to avoid stuff like that happening again. I also ran a dozen Labs on my Champion trying to get a helm to enchant for my ranger or him. No such luck. I did at least for my ranger get a 75% increase in mana reservation efficiency for Precision. As a result, she runs out of mana less frequently and gets killed less due to it. Not what I was looking for but at least something and it’s helping. I had some sales throughout the day so I at least have a little something to start sourcing another round of materials. I still need to clean up my stash tab and get everything listed on the market. Hopefully, it won’t be long before I can start running more maps again.

The single The Nurse drop I got is still a lot less than I was expecting. I’m going to hold onto it for a day to see if my luck changes and I have more to ask for a higher price. There is like half an Exalt worth of or a little more difference between eight The Nurse and The Doctor card that they turn into. While that is great for quick sales since people are buying for flipping. I’d rather have more profit and it takes me more time to sell.

Not sure yet if I’ll be doing more tier 3 tower or giving tier 6 a try.