It was time. Several weeks of effort grinding my way to a giant pile of Exalts all to be spent on a single item. I never owned a Headhunter before in Path of Exile and I never thought I would. Then this league rolled around and here we are. 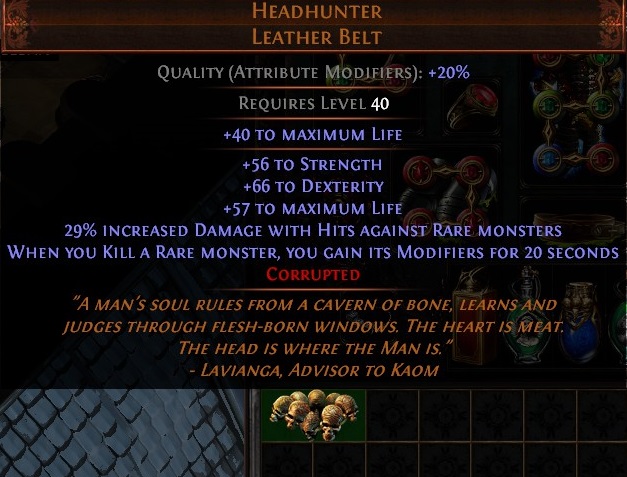 It was a brisk sunny morning. The light was pouring through my blinds into my eyes. The tension was building every moment that ticked by one by one. The sweat on my palms was starting to accumulate. The room reeked of gamer of 3 days. Containers and dishware cover the desk like they have been around for months.

The morning of I had hit 84 Exalts. It had to be four or five in the morning. I was so tired I did not trust myself trying to make such an extravagant purchase. I tried to get some sleep with my eyes dancing in a hurricane of thought as my mind raced another hour away before giving in to the sandman.

I woke far too late in the day to get anything useful done. I turned on the beast and it screeched as always when I turned it on. One of the fans must be dying on my computer. Then again the thing is a lint trap of death and spring can’t come soon enough.

I opened the old faithful Path of Exile trading website and set a search for the Headhunter I wanted. While there were some up for sale by others. I lacked the balanced to buy them. The ones I could afford were not that great and I knew the chances of something better would come along later in that day.

As a result, I hit the live search feature and waited.

The clock went around two revolutions before a disturbance was made. No, it was not the Path of Exile website singing a wonderful and mind-blowing DING alerting me to a match that was found on the item I was looking for. The neighbor's loud freaking car had arrived and everyone within three blocks could hear it.

I went on about my day getting some things done. Then I felt it in my very soul –DING. A decent headhunter had popped up that I could afford. I contacted the player in-game expecting to hear nothing back. To my surprise, I got an invite to a party for making the trade.

I loaded up my inventory with Exalts. Teleported over to the player's hideout and waited for them to open a trade. I moved all my Exalts into the trade window and that was followed by a Headhunter entering the trade on their side of the deal. 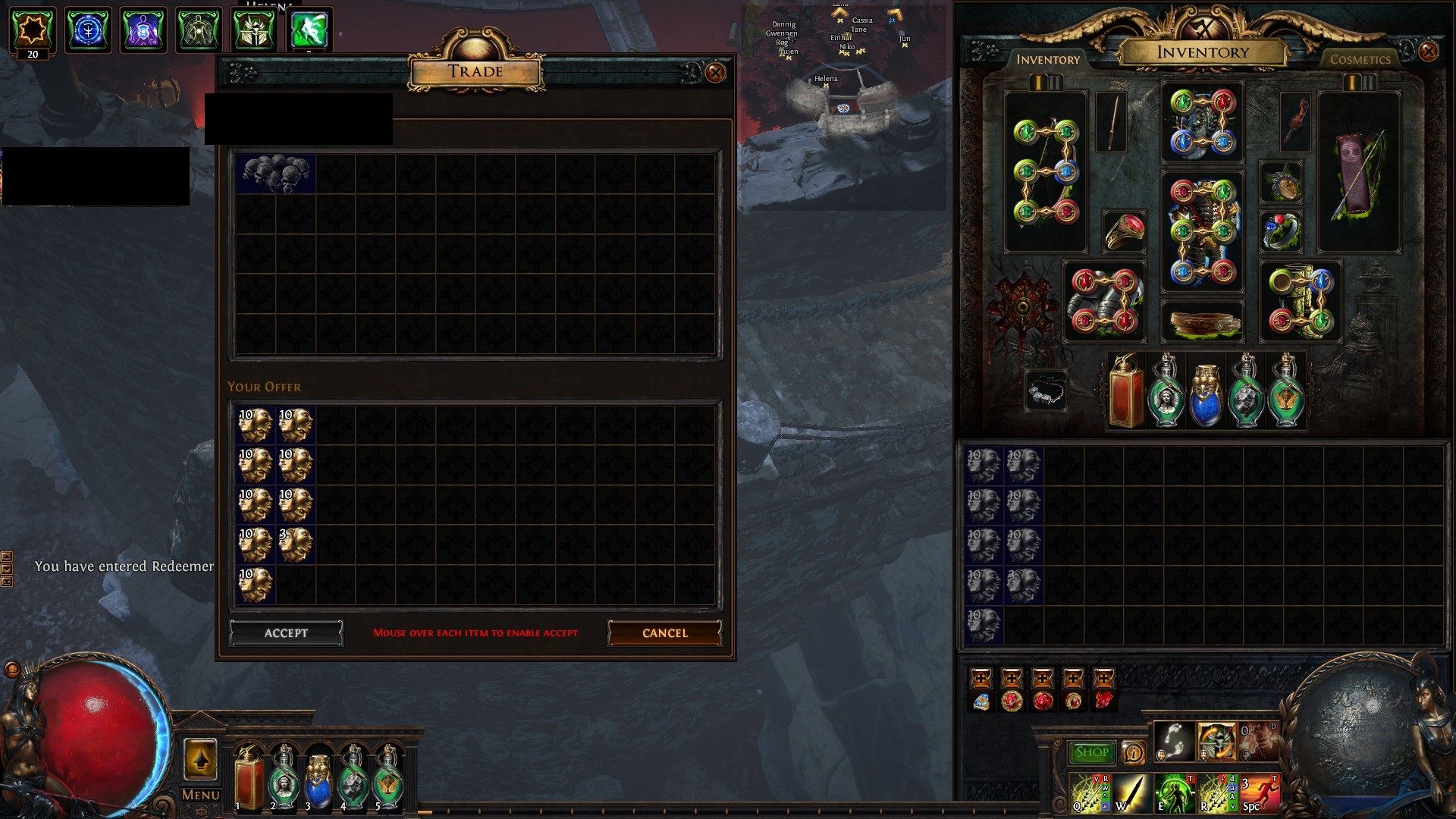 I must have checked that it was a legit Headhunter and the one I wanted to buy at least a dozen times. I’m not saying the person I traded with was or has ever played shenanigans. I just know there are some shady people out there trying to pull a fast one on you in recent years in Path of Exile.

It was not always that way. You use to be able to trust strangers in Path of Exile without question. If a mistake was ever made both parties went out of their way to make sure everything was resolved. Not so much these days.

After what felt like an eternity I clicked the trade button. The Headhunter was mine and I teleported back to my hideout. I placed it safely into a stash tab before switching over to my range. 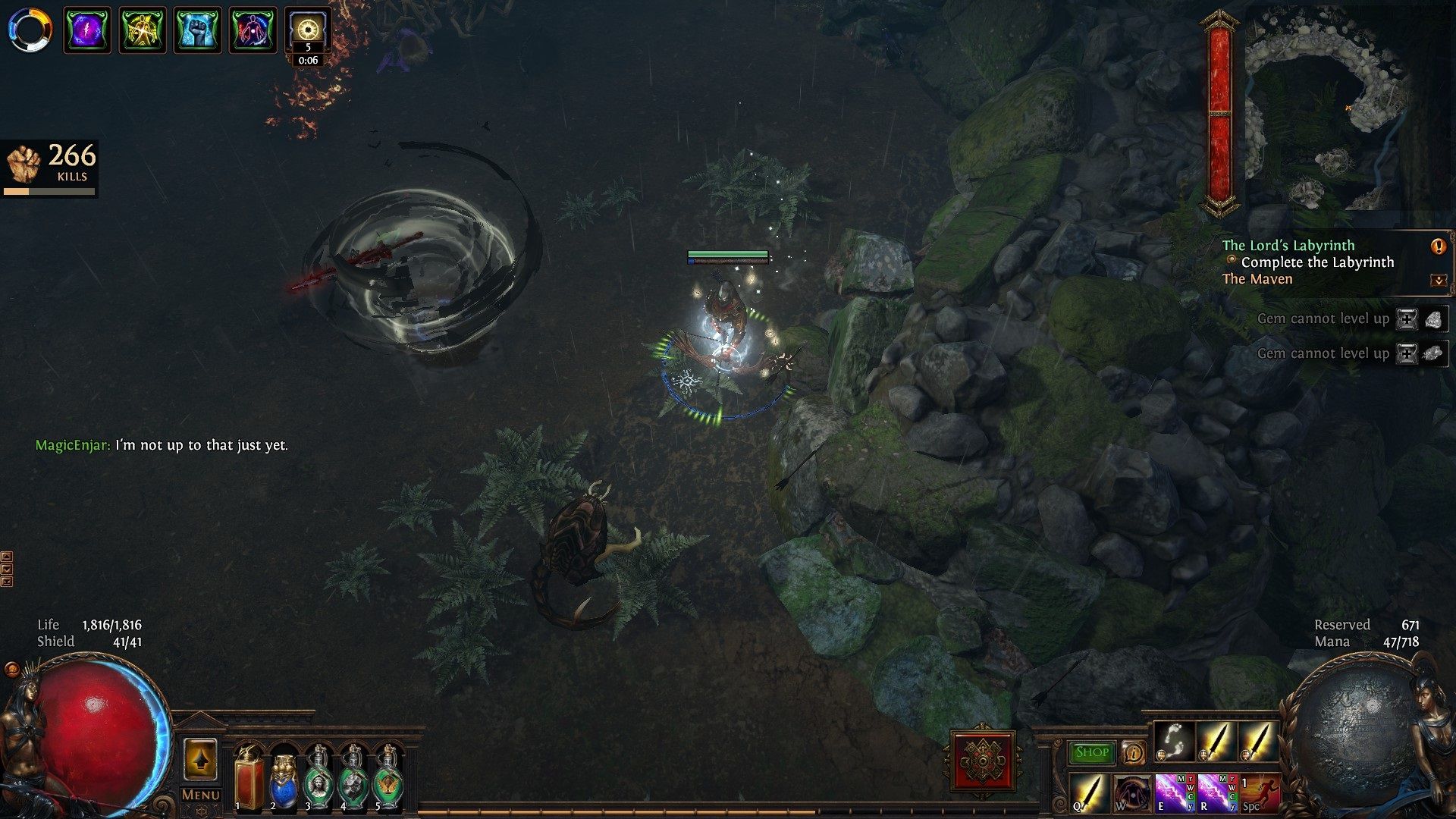 My ranger had only been at the mapping stage of Path of Exile for two or three levels. She still needed a lot of gear upgrades for the build I was going for. Without a Headhunter, she struggled to clear a tier 1 map and I had my doubts.

I put the Headhunter on my ranger and went out onto a tier 1 map just for testing. Not far in and she got killed like normal. I don’t know what I was expecting but that was not it.

The thing that makes Headhunter insane is for 20 seconds after you kill a rare monster you gain its modifiers. Those modifiers could be several things from more health, damage, running speed, and many odd things. The issue is it only lasts 20 seconds and then it’s gone.

I gave the Headhunter a few more tries. I was rather disappointed. My ranger kept getting killed as it has been. While I could gain some modifies they never felt like anything that great. Granted I was running tier 1 maps.

At this point, I’m still missing quite a few items for the massive amount of magic find (item quantity and rarity). My resistance is still not maxed. I knew it was asking a bit much for a single item despite the price tag of 83 Exalts to do all the lifting. 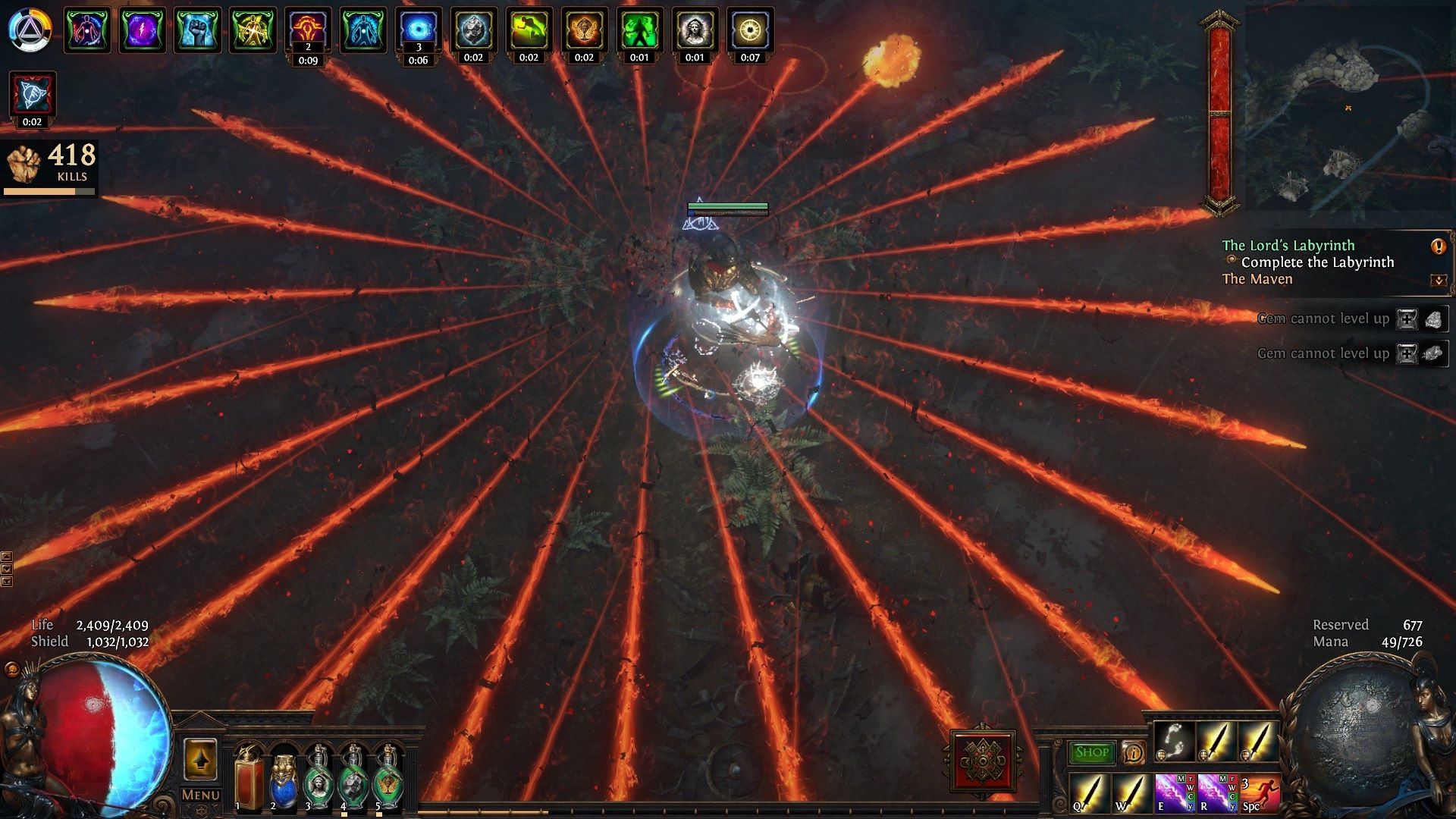 I switched over to my main character for a short while and acquire more things to sell for some quick currency. I purchase a few more things from other players and then switch back over to playing my ranger.

I short term resolved my resistance issues and picked up an item with a lot of armor on it. This will hold me over in the short term while I get some levels under me and a lot more passive skills to pull things off.

I noticed after a little while I would get Chaos orbs to drop but like 5 of them at a time in some instance. Overall with the amount of magic find I had on already they seemed to be dropping at a higher frequency and a larger amount. 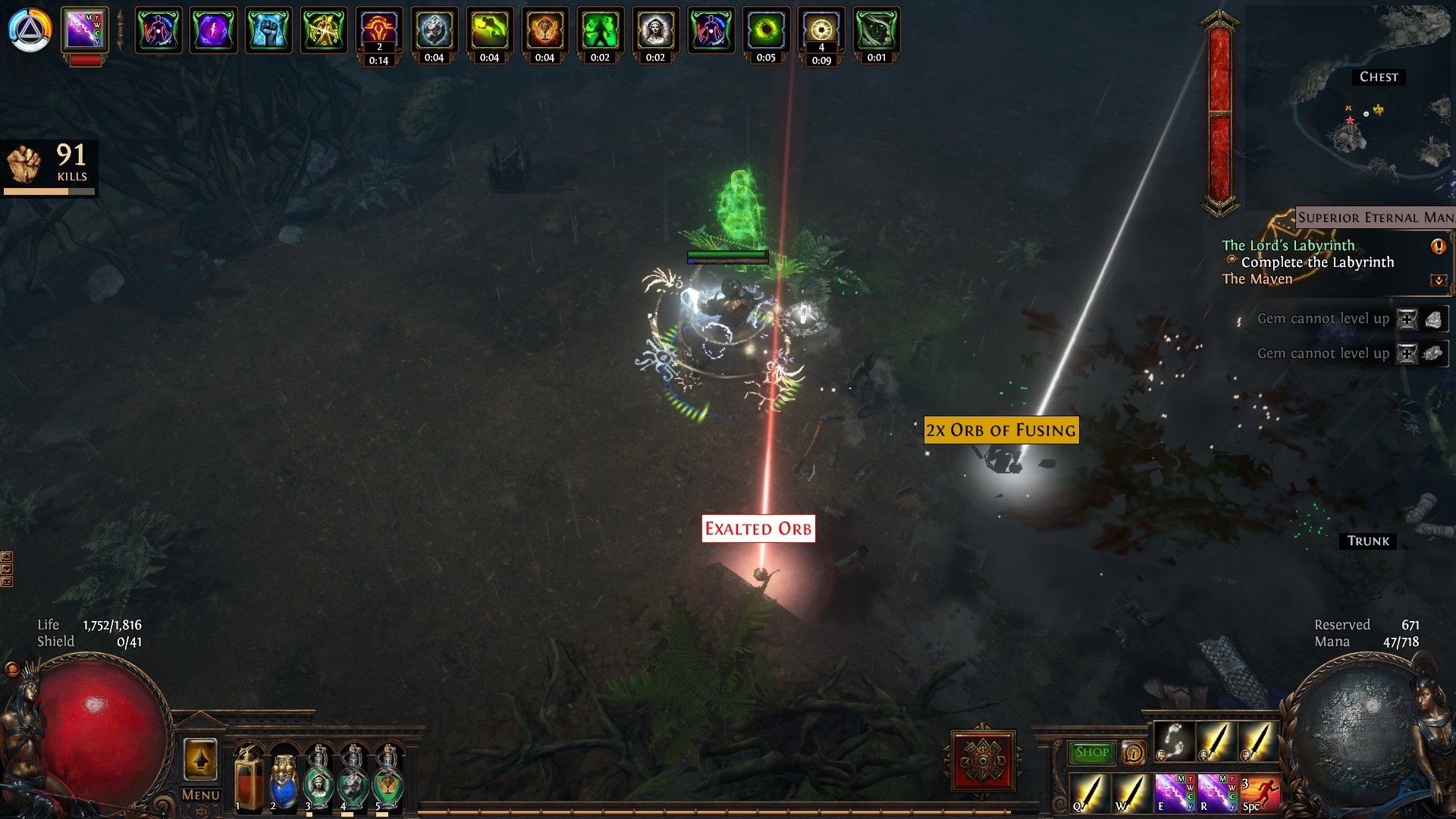 Up until this day I have been on a bit of a raw Exalt drop dry spree. In a tier-one map no less I got an Exalt to drop on my ranger. That alone would have been insane expect it was the second of the day. While out on my main he also had an Exalt drop earlier. However, it was welcomed and spent for more upgrades.

I also took some items off my main character to put on my ranger to help things along. Most notably my flasks. I had two that auto-trigger when they are full that give you movement-based speed. With Headhunter having a 20-second buff after killing a rare that made a massive difference.

I could start to see the value in the Headhunter and I knew it will be a while before I fully understand and appreciate it. It has caught me off guard now a few times for some rather funny moments.

In one instance my speed flasks had just triggered and I happened to have killed a rare monster. That rare had movement speed modifies. I was moving across the map at such great speeds I thought my computer would catch fire or the game would out auto kick me out thinking I had done something bad.

It was such comical speeds. An item dropped that I wanted to loot. I attempted to pick it up. The ranger overshot the item to such a degree that it was no longer on screen and I could not find it. After a few attempts, I gave up.

I swear before all the speed buffs wore off I went from one end of the map to the other. It was now done and so I left and moved into the next one. Thankfully nothing of high value dropped I’m not sure I’d ever loot it at those speeds. Perhaps it’s a good thing the Headhunter stealing mondifires for 20 seconds is so short.

Before long the ranger chewed through at least 30 maps. Thankfully I had a massive bulk pile of them from all my Delve runs. I however was not getting any map drops as I was in too low of an area for the Awakening Level 8 I had the Atlas at. I would go on later on my main to kill all the guardians and remove the Atlas Watchstones down to zero awakening level. The playstyle and build I’m going for on the ranger makes it quite a glass cannon. My main character a Champion is on the other side of things in being quite a tank. Getting used to playing with a Headhunter and a character that dies if the wind is blowing the wrong way is going to take some time getting used to.

My bow, helm, amulet, boots, chest, and skill gem have modifiers for either item quantity or rarity or both. Hopefully, in the next day or two, I’ll have rings which will add a lot more. I think other than that there is also one other magic find the item I need to pick up that is a flask.

Outside of some items and leveling up skill gems I’m getting quite close. I still have a few other things I need to pick up as well. While I’ve farmed some Orb of Unmaking while killing guardians on my main I’ll be a few short for resetting Atlas passive trees for the new way I’ll be playing. First, though I want to make sure I have a little bit of currency before I remove some of the old ways I was earning some.

I’ll also need a bit of a bankroll and a better understanding of how I’m going to roll the maps and all the items I’ll be using to go along with it. To try and maximize a few things like the pack size of the monsters, and other modifiers for the maps themselves. This will be an ongoing consumable cost to this way of playing.

I’m rather light now on currency and items to sell. I must be reaching 100 Exalt range now spent on the ranger. I would have never thought of having such wealth in Path of Exile let alone spending it all on a single character.

The plan moving forward is to gain some more levels and further work on what I’m missing. After that, I’ll be attempting to farm Tier 10 Tower maps for the rare card drop in that zone. Along with trying to get near 300 stacks every run for Scourge so I can level up a bunch of maps to farm. 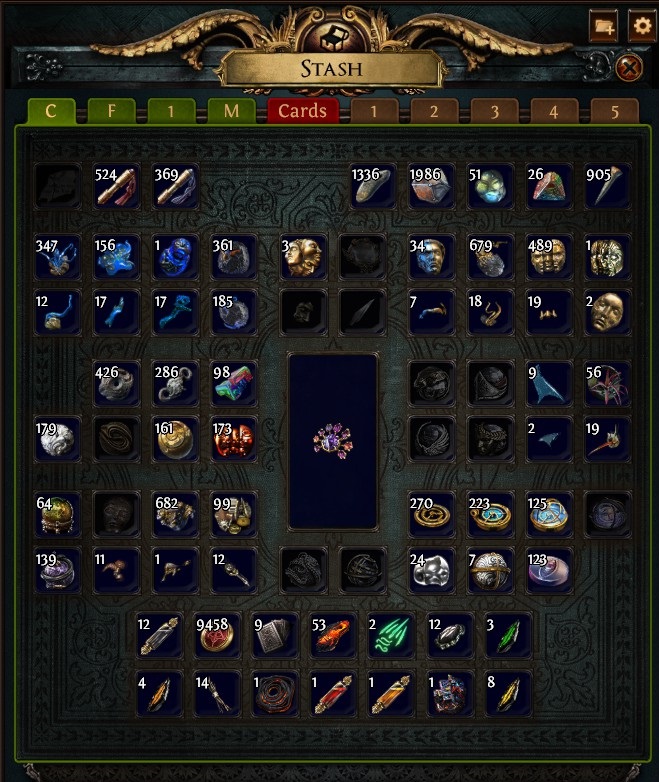 This league for whatever reasons keeps getting more insane in what I’m doing or planning to do. Many players might dream of one day doing. I’m at the point of now doing or about to be. All in an actual league that only lasts a couple of months.