It has been a while since I’ve played in a league or even Path of Exile. As such, I felt it would be more enjoyable to just play the standard league for it or as the players call it trade league. I’m rather glad I did as I was a bit rusty. It didn’t help matters any I was playing a new build I had zero experience with beforehand.

As always a few hours before the league starts there is one final patch. I kept an eye out for it and made sure I was downloading it the second it hit. Since I’m playing Path of Exile over on Steam and not from their standalone client. It can take a while for it to unpack and rewrite things since they don’t make the patch just for Steam.

After that, I managed to get myself into a queue over an hour before the league started. The good thing about Path of Exile is they tend to have very quick queues to get into the game. This is not like other games where you could sit there for half a day once the game servers are up and running. Getting in pre-10k meant I would not have to wait very long at all.

Since I deiced not to refamiliarize myself with the game I knew my first few hours were going to be a bumpy one. With lots of dying filled with struggling to make choices on gear or when to get skill gems. Followed by even more death.

I died a lot in Act 1 of Path of Exile. The build I had selected that many this league had picked is called Toxic Rain. You however like most build don’t just start with the skills you will play for the entire game. You need to work your way up to them. Till a point where you need to make some major switches in gear and skill gems and commit to it.

Once I got into and made my Duelist it was off to the races with everyone else playing in the trade league. I did not even make it to the first checkpoint and town of Lioneye’s Watch before my first death. I was quite out of the swing of things literality.

After my first death, I ran back to where I had died and fought the first-named NPC right before entering the town. I had heard rumors that many were getting disconnected and sure enough, right before I got my kill and clicked into the town-- I lost connection.

This time instead of getting in below 10k players waiting it was over 30k. Thankfully queues move quickly even more so when everyone is getting disconnected. I waited maybe twenty minutes or so I don’t quite call. It was not that bad.

I finally got in and made a run at it again. Yet again-- disconnected. At that point, I checked Twitter to see they had reported some server issues. Since the developers of Path of Exile do leagues a couple of times a year they have some tricks up their sleeves. They managed to resolve most of the issues people were having by disabling chat.

While I’m sure Path of Exile had a certain expectation of how many players on average have been showing up to league start. There are a lot of players like myself who were waiting for Path of Exile 2 and had not played in almost a year. For whatever reason, Scourge League lured a lot of us players back in.

Finally, I make it back into the game yet again. Make it the first town to do some quick business of picking up a quest and checking the vendors. I took a look at what gear I had looted and dumped on a vendor that I was not going to use.

The next zone is The Coast. I died. Not once. Not twice. Three times before I made it to the portal checkpoint in that zone. From there I went off to a little side area called The Tidal Island. I know the quest NPC in there you need to deal with can be a bit tricky this early on in the game. Add to the game win pile another three deaths on my part.

I was quite struggling with the skill gems I had selected to play with. I had never used Splitting Steel or its later equivalent Shattering Steel. They consume a steel shard on the use which means you need to cast for steel shards. Otherwise, you are just doing normal attacks when you go to use it.

Thankfully by the fifth zone of the game, I was getting the hang of using my primary damage attack skill. The number of times I went attack without having steel shards is still quite mind-blowing. It more than a few times caused some quite intense and interesting moments.

Thankfully the rest of Act 1 went without much trouble. I was leveling quite slower than normal and I have never been known for being a quick leveler. I tend to take a lot of breaks as I have other matters to attend to than just playing Path of Exile.

Another new thing for me in this league was making a point to interact with the league mechanic from quite an early stage of the game. In past leagues, I would normally avoid it as they tend to be great ways to get killed and slow you down even further trying to get to mapping in Path of Exile. 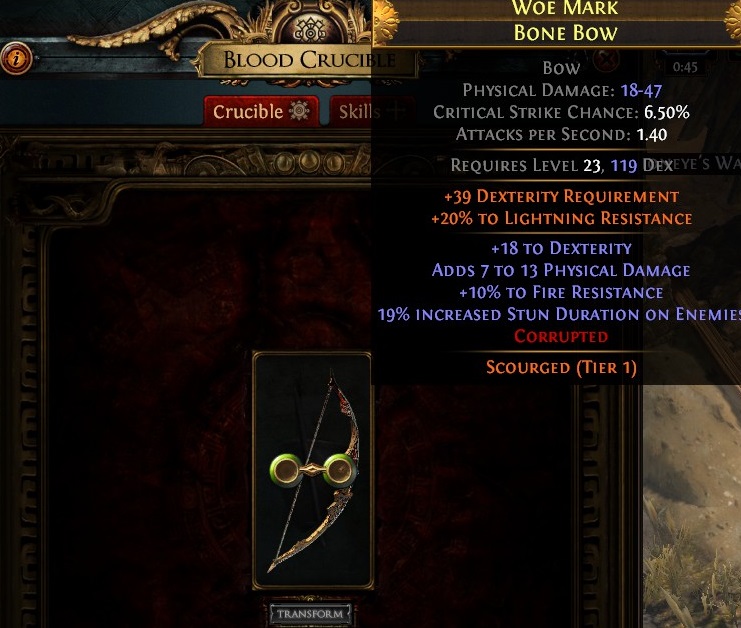 While it did slow me and got me killed quite a lot. I also found it interesting. One of the things you can do is place items in blood curable and corrupt them once you get enough blood. This would give them positive and negative stats along with making the item corrupted. While this was not the most particle thing while leveling up as I rarely got something I wanted or I had found better by the time it was ready for use. It at least got me in the habit of making sure I have an item in the blood curable.

Act 2 was mostly me running around like a crazy person trying to find gear and for the skill gems, I needed to use. While I usually try and focused on getting at least one if not two two-tone rings and a leather belt in Act 2 my mind was a bit occupied.

Since I had been gone from the game for so long I have also missed a lot. The further along you get into the main storyline before hitting the maps the more the game slowly starts to mix in older league content that got added to the core game. Quite a few times I had forgotten or have never even done some of the game mechanics.

Act 3 was a bit of a blur. Other than wishing I was dealing more damage I don’t recall much of anything else. I think I only died twice which compared to act 1 was quite an improvement. I did at least at some point luck out and get some items that helped carry me. The first was a Kaom’s Coral Ring that gave you life for each hit and increase on endurance charges which was not a big deal for me. 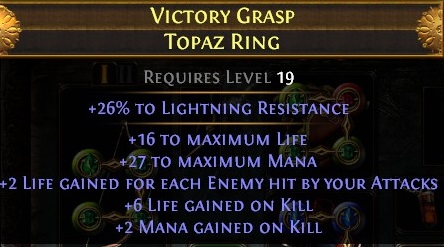 I also found a rather crazy topaz ring that made life easy. Between the life gained for each enemy hit and even more for getting kills. Along with gaining mana per kill which helped a lot later on when I was struggling for mana. I more or less could stand in giant packs of monsters and as long as I did not stop attacking I was not going to die.

By act 4 I was on the hunt for a bow and I had been leveling some skill gems to make the switch. The skill Shattering Steel was just not cutting it anymore. I also grew tired of always having to make sure I had shards to even deal with damage with it.

I would check the vendors every time I leveled up along with keeping an eye on what was dropping. For Toxic Rain and that sweet topaz ring, I had found I knew I wanted a decently fast bow.

I ended up finding a white rarity Grave Bow from a kill. I was also in luck it had four green sockets for my new skill setup for my main attack to go. The only issue was only three of the four were linked. As chance would have it I had two Orbs of Fusing and on my second chance, I turned it into a four-link. I then rolled the based stats on it and lucked out even further. While it would have been nice to have gotten a +1 or 2 to socket gems. I ended up getting the other stat I was looking for which was increased attack speed. I did not have a lot of currency to keep rolling so I kept it as it was. This bow ended up lasting me for quite some time.

From that point on I rained toxic arrows down from the sky onto packs of monsters. Causing death and devastation where ever I went. While I have in the past called it a night once I finished act 4 I pressed forward.

At some point, I stopped to do my first Labyrinth Trial. Since I was over-leveled by quite a lot along with toxic rain doing quite a great job at killing everything in sight. I had an easy time. Before I knew it I had ascended into being a Champion. The skills I picked up are not that great till I enter again later.

I finished off Act 5 and called it a night. It seems I did not stop to take many screenshots along the way during the night. I just had too much fun getting killed and seeing how my items would corrupt in the blood crucible. Rather glad I decided I was going jump into this league. With many of the changes that have been made for this league, I think this is going to be the one I play enough to see some new content I have never made it to. Toxic rain is supposed to be quite an amazing build that can withstand a lot of things in Path of Exile.