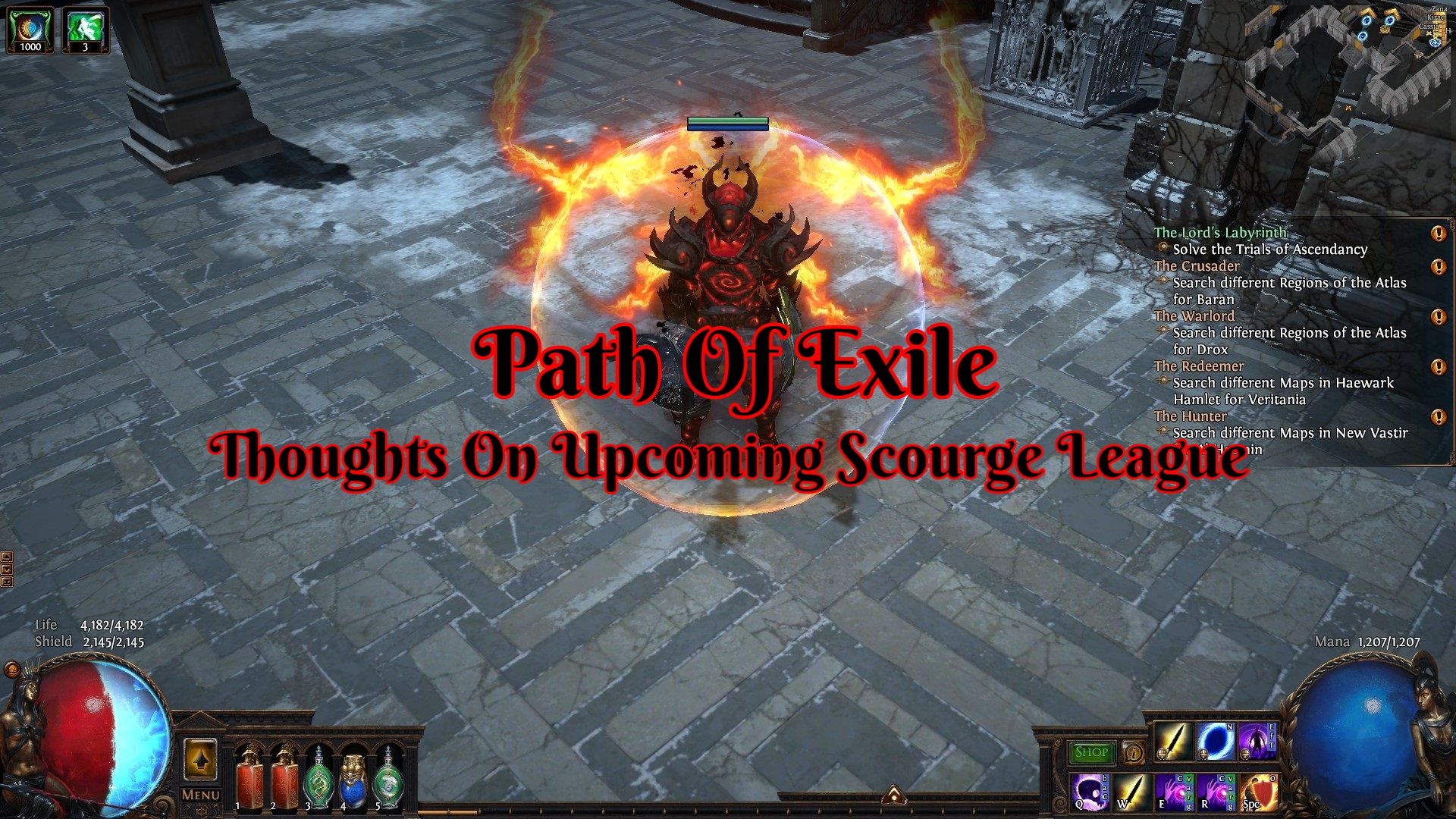 It’s been over 10 months since I’ve last played Path of Exile (PoE). While I was waiting for PoE2 from what I can gather it has been delayed till sometime in 2022. After finding out the next league Scourge starts on October the 22nd I’m rather inclined to dive back into Wraeclast and see all the changes that have occurred for the year.

If it’s one thing I know about PoE is they are always making changes to the game. That can be both a blessing and a curse at the same time. It can help keep the game fresh and for new things for players to come back to. It can also make the game quite hard since every League can be added to the core of the game along with other side changes.

Scourge League is one of those that seems to offer a lot of changes to the game. While there is also some fun to be had from the league itself I find myself more interested in many of the changes being made to the game and not so much from the league mechanics. 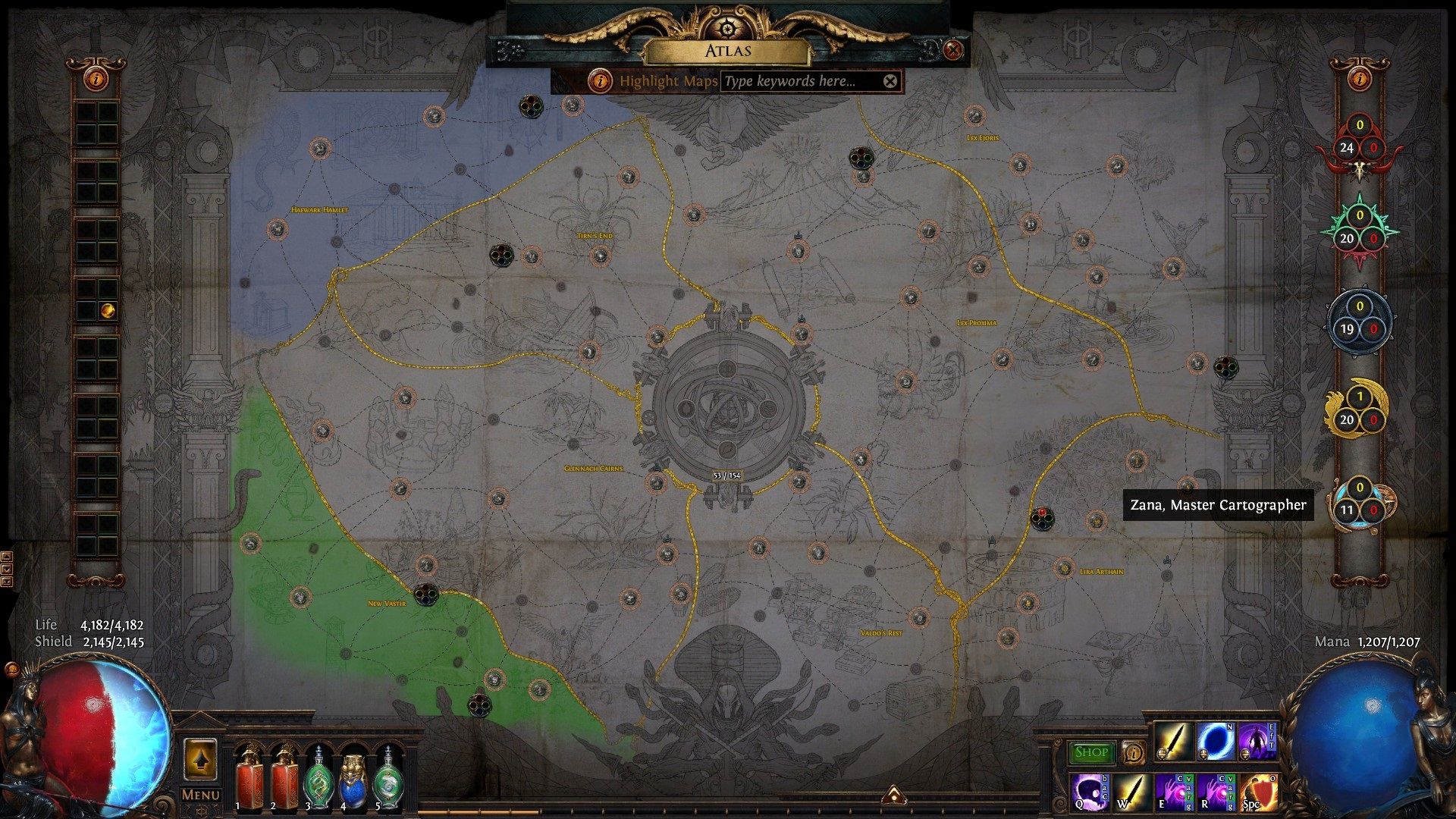 (Old Atlas)
I can already tell they have made a lot of changes over the past year to how mapping works in PoE. For those not in the know once players reach a high enough level they have finished all the acts in the game and are left with the Atlas. A device that you put maps into that you get to run furthering your adventure in the game.

In my opinion, running maps is the main reason I enjoy playing the game. It gives me quite a wide range of different areas to run in varying difficulties and even loot. Scourge league brings with it a decent-sized reduction in the size of the Atlas. The developers of PoE claim it will take around half as long to complete most of the maps.

For me, as a player, I’m rather thrilled that they are refining the maps on the Atlas. While they are reducing it down to something like 100 maps and some extras. That is still an insane amount of content to run and more importantly maps to get to drop.

Changes On Past Leagues On top of that, they are also going back and making some changes to past leagues that got added to the core game. For most of them, they are adding extra levels or tiers in difficulty to give the player base who have run them many hundreds of times more of a challenge. While maintaining the risk to reward creates reasons for players to take the plunge and go after the harder challenges. That can sometimes be a hit or a bit.

Out of all the changes they are making to past Leagues they are improving the one I have enjoyed the most over the years Delve. They are adding more modifies to deeper depths of the Mine and boosting the difficulty of many of the monsters.

They are also making Delve easier for mid to late-game players to get a bigger leap into it by improving the catch-up mechanic. In the past, you would join and it would put you at a certain depth. Where you would have to burn large amounts of Sulfur you have collected just to get caught up to your current level in the game. With the difficult changes and them putting you much deeper into the Mine it sounds like it should be more on par with your character levels. Without the endless grinding of easy content.

One of the more fun things to find in Delve are what we players call cities. According to the developers, they are increasing the random chance of finding them when going deeper or sideways in the Delve Mine. Cities have an instance the player entries that are filled with treasure among other things. If you die even on softcore mode that instance is done and you can’t reenter to retrieve anything you left behind.

While there are other improvements to many leagues for me that is what I am most interested in. If I could I would spend most of my time playing in Delve. To this day I still wish I grinded harder in Delve back when it was a league instead of only playing it for several weeks.

(Old passive skill tree)
It looks like they have made massive changes in a good way to the passive skill tree in the game. For those that don’t know the skill tree is best described as a map of the universe with how massive and complex it is. I am not an expert on it by any means. It looks like they are decreasing the need to travel to what used to be niche nodes which one can only hope enables easier building and more variety of builds. Which PoE has never been short on with endless choices and ways to play the game.

For many players, I feel it will make getting different passive skills they always wish they could have had with their favorite build sooner. Getting to level 100 in PoE is frankly something I’ve never done and I would feel the majority of players who only play in new leagues with fresh character every couple of months are in the same boat.

It will also shake up the gameplay quite a bit. With the player being able to select from a list of possible passive they want once they unlock a node on the tree. One can only hope this is not in some way preventing favorite builds of the community in some way. 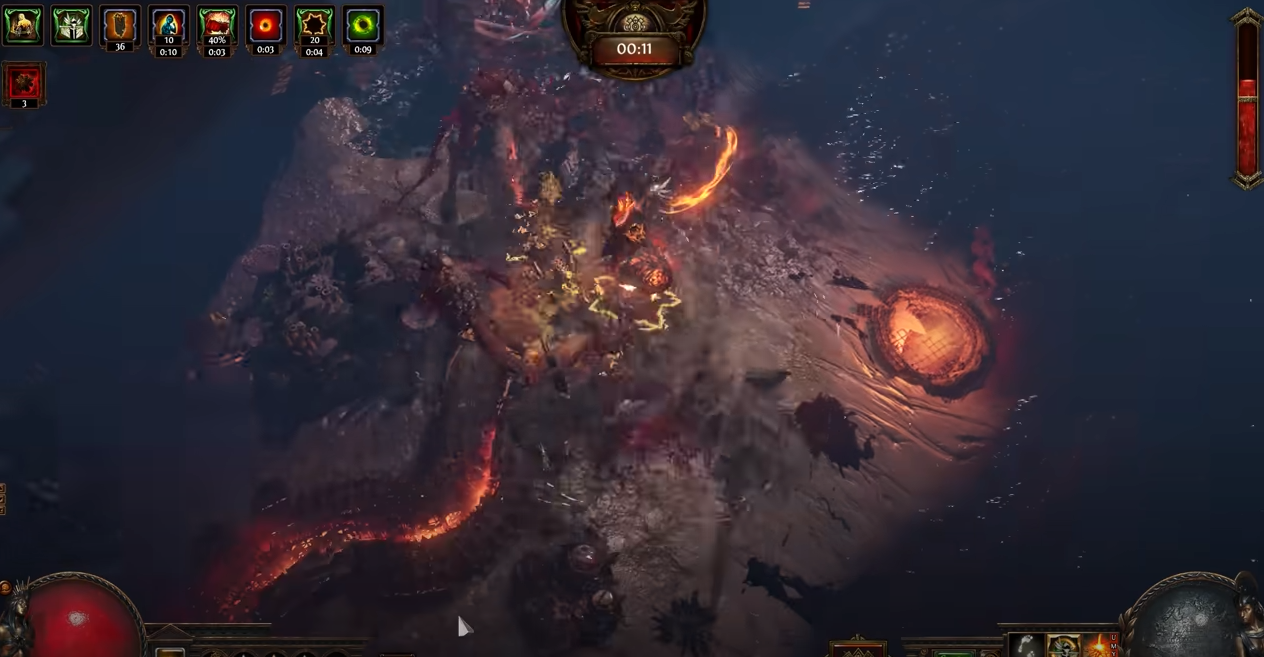 Scourge League Trailer
I’m willing to admit if it was not for all the other changes that Scourge league is bringing I might not have been interested. I’ve already waited over 10 months for PoE2 so a few more is not that big of a deal. The league itself is about you filling a Crucible implant with the blood of your enemies that allows you to switch to a darker alternative of the game's world.

Since 2013 PoE has had something like 34 different leagues. I have to say that is quite an impressive amount. These are not leagues like in other games where they just change a couple of items stats and some other minor things. For the most part, they attempt to add new kinds of gameplay at least that is how the major of the new ones have gone.

As a player, I’m not that thrilled to have to go and collect something. That allows me to enter an instance. Where I have a very short amount of time-based on how much blood I’ve collected before it kicks me out. That is kind of the cookie-cutter layout of how the base of many leagues is.

They do at least add in a few twists and turns with the league trying to spice things up a bit. One of the biggest ones is the Crucible allows you to put corrupted items into it to transform them in some way. Items once they level up to gain both positive and negative attributes and can be changed several times before reaching max.

The more interesting thing here is being able to make changes to corrupted items. For the most part in the past, once an item has been corrupted you really could not make any changes to it. That included not even changing the socket links or color for skills gems. With Scourge league, it drops special currency so you can change links or even socket colors.

Another big thing is going to be leveling up your crucible. Instead of like other games where you have some limitation to how many upgrades you can have. They are going to allow you if you want to grind insane amounts of kill to unlock everything. These upgrades appear to have an impact on transformations and even having more items in the Crucible itself.

The thing that gets a PoE player heart pumping I believe will be the items in Scourge League itself. Since they are increasing the difficulty they also have to offer more of a reward for the player to take on challenges.

https://twitter.com/pathofexile/status/1449842629907083267
Out of all the item leaks, the developers behind the game have shown. The one that interests me the most is called The Squire. It is a shield with 3 sockets where support gems in it also support gems in your main weapon. There are a lot of builds over the years that have been nerfed and this could bring them back to life. This could also decrease the need for players to need a six-link chest for their build or devote it to something else.

While there are bound to be a lot more behind Scourge League than what has been made known so far. It is shaping up to not be a very knowable-focused league. As in you can enjoy the league without having to fill out an entire spreadsheet of information just to get something out of it. You can just do what PoE players love doing and that is killing lots of things. 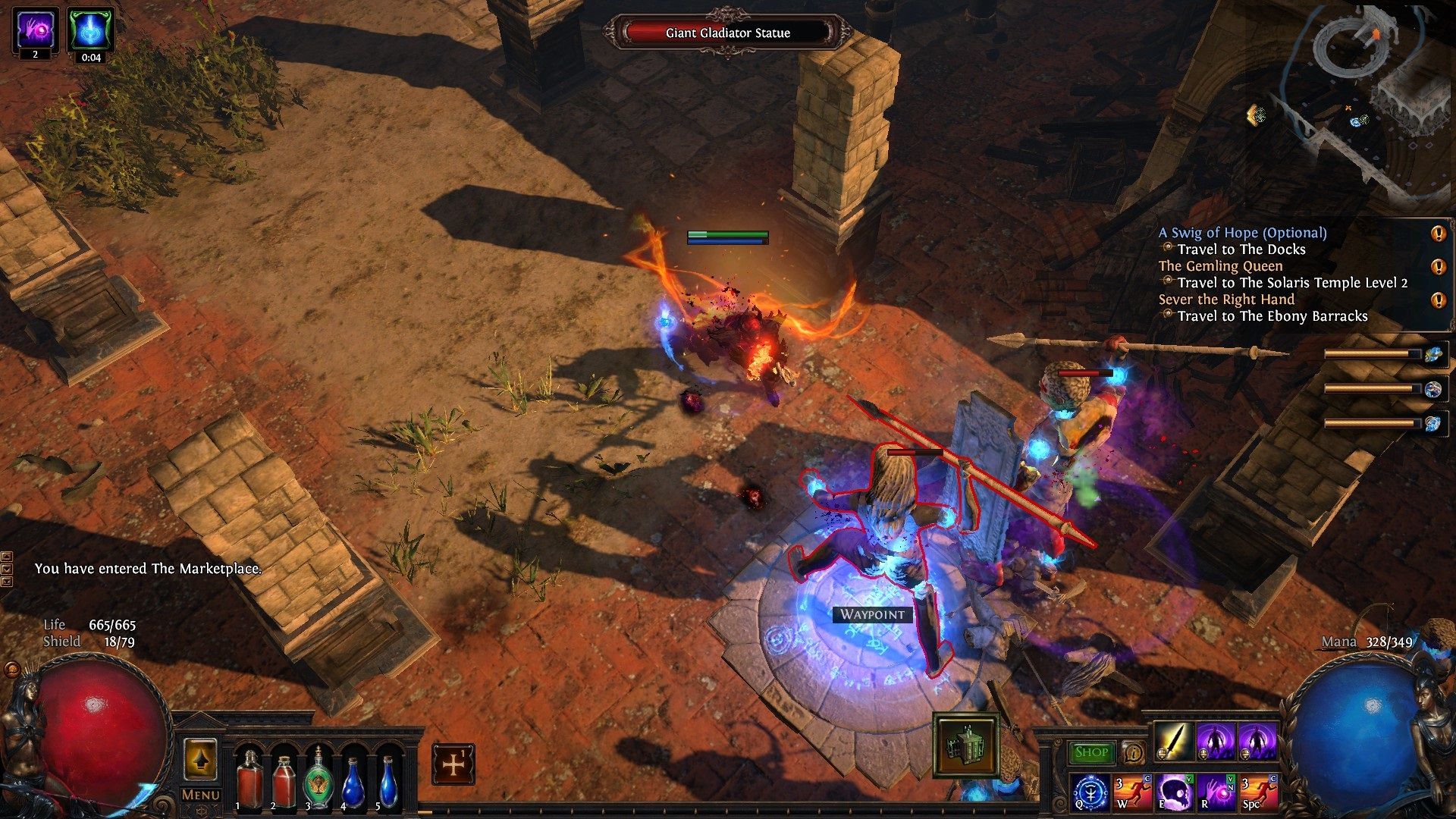 For me, I think the biggest challenge this league will bring is getting back into the swing of things. I’ve also missed out on a lot of changes that have had a huge impact on gameplay over the past year. If I don’t end up liking the new league there are enough changes that should keep me playing it. I do look forward to faster progression in the Atlas and going deep into Delve if nothing else.

Well done to the game developers that can keep a player like myself with over 2,500 hours played coming back for yet another round. It is rare for a game these days to keep a player for more than a few hours. Let alone have them keep returning year after year just to see all the changes.

Screenshots were taken and content was written by @Enjar. Screenshots are from Path of Exile. The information discussed is based on the official league reveal for Scourge.