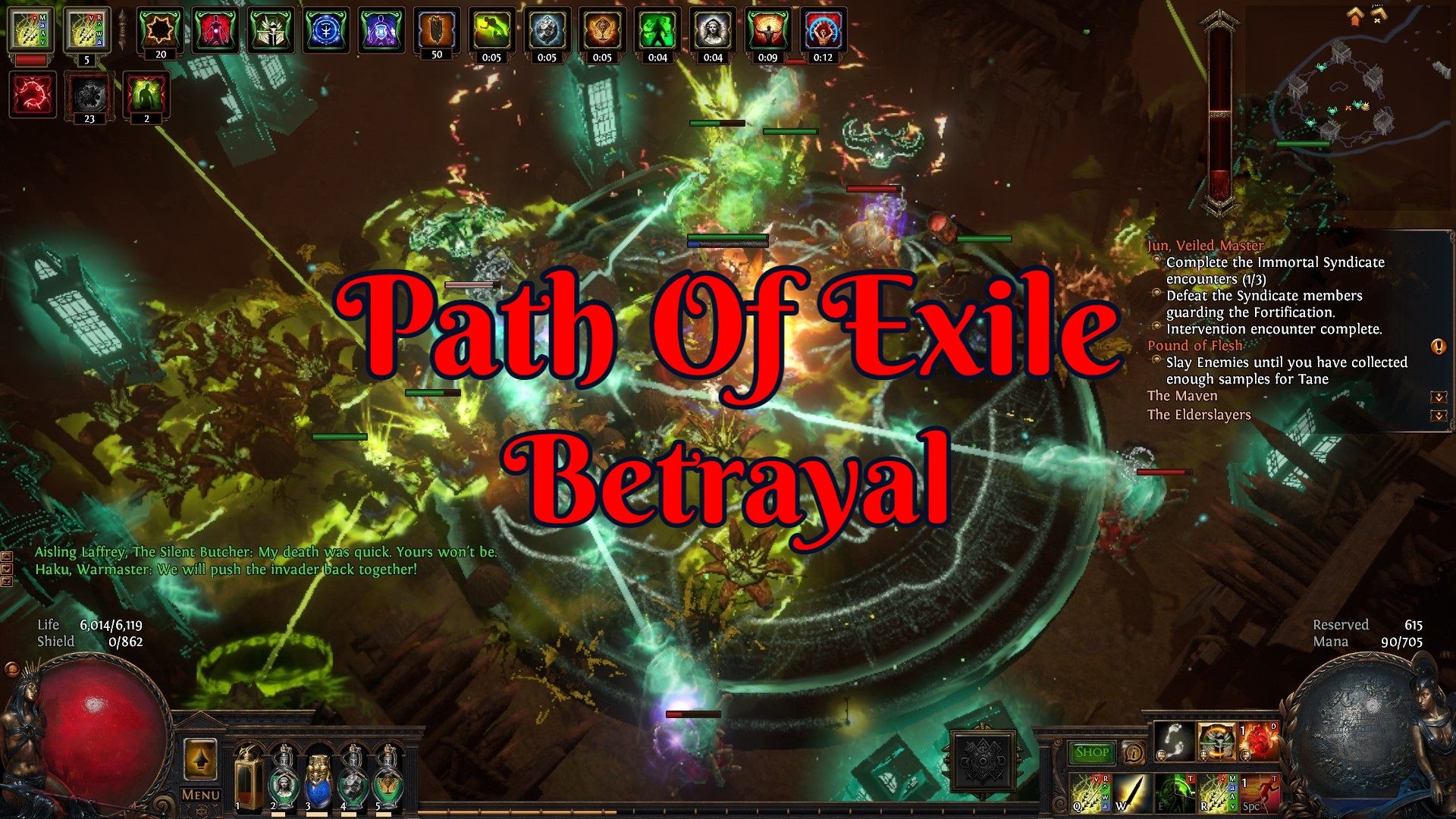 Game mechanics from the Betrayal league have always been something I’ve somewhat avoided. I had a bad experience like many players when it was first introduced. Over the years Betrayal has become quite important for things like crafting with the modifiers it allows you to add to gear. There have also been some changes making it less of a grind.

In Scourge league, the developers reduced the amount of grinding it takes to level to the highest tier for a modifier stat to add to an item. Instead of having to find veil items and unveiling those to level up say chaos resistance taking a few items to reach level three. Now at the higher levels, you just need one item to unveil and you have it maxed out.

I have found myself in need of several of the possible crafting modifiers from Betrayal. There are many items I would like to upgrade or add to my current build. The issue is the lack of supply on the market, high completion for those items, and just how much they cost. As a result, I want to find items where they have an open slot on the item to craft my own desired modifier onto the item. If I do happen to find such an opportunity.

My history with Betrayal has always been a bumpy one. When it was first introduced any interaction or it just being on the same map as I caused horrible lag. This is something a lot of players back in the day had to experience and deal with. When it got added to the core game still caused issues for many the player base was unhappy about it.

While they have worked on reducing the lag issues that many faced when dealing with the different mechanics of Betrayal. I can still tell there is a little struggle for my computer when I encounter things I have to fight to revolve around them. This is why I tended to stay away from it as much as possible.

The downside to just ignoring or moving out of the way when I run into Betrayal is I have not unlocked many of the unveil modifiers you can get for crafting. So I have a lot of grinding I would need to do to unlock most of the modifiers you can get. In doing so hoping I get some of the ones I want for my toxic rain build. Thankfully there are several different ways to grind them quite quickly. The main one I’ll be using is the daily Atlas missions that have been stocking piling since I’ve been ignoring them. I have 17 of them that I can trigger by talking with the Veil Master in my hideout for red maps. If I wanted I could farm another 17 for yellow maps as well.

Since I have a massive stockpile of red maps I need to run for more Atlas bonuses. Having 17 Betrayal missions to run along with them is quite beneficial. While it would have been best if I was not ignoring them every time they showed up in the wild randomly. It at least won’t be that bad.

While I do have quite a few reasons for disliking Betrayal another one is it’s quite player information-dependent. If you don’t know what you are doing the chances of rewards sucking and it taking longer than you would like become quite a possibility.

While I have quite an basic overview of Betrayal that is a bit dated from being written in 2019. The basic of it is you have syndicate members you are trying to gain information from. You need to defeat them in battle and decide the fate that could: promote them in their ranks, remove them from play, create or break relationships and so on. It’s kind of like you are controlling who is in and who is not in a mafia while also trying to find the location of a stash house. The Betrayal boards are jammed packed full of information and context clues. I’m quite rusty about the mechanics behind it all these years since I’ve been mostly avoiding it like the plague. I don’t recall who I want to be at the head for each safe house before I raid them and a bunch of other things.

Instead, my main focus was just getting items to unveil. Leveling up a few different branches so I could run some safe houses as well. Along with seeing if I want to engage with the Betrayal when I see it or skip over it once I’m done. 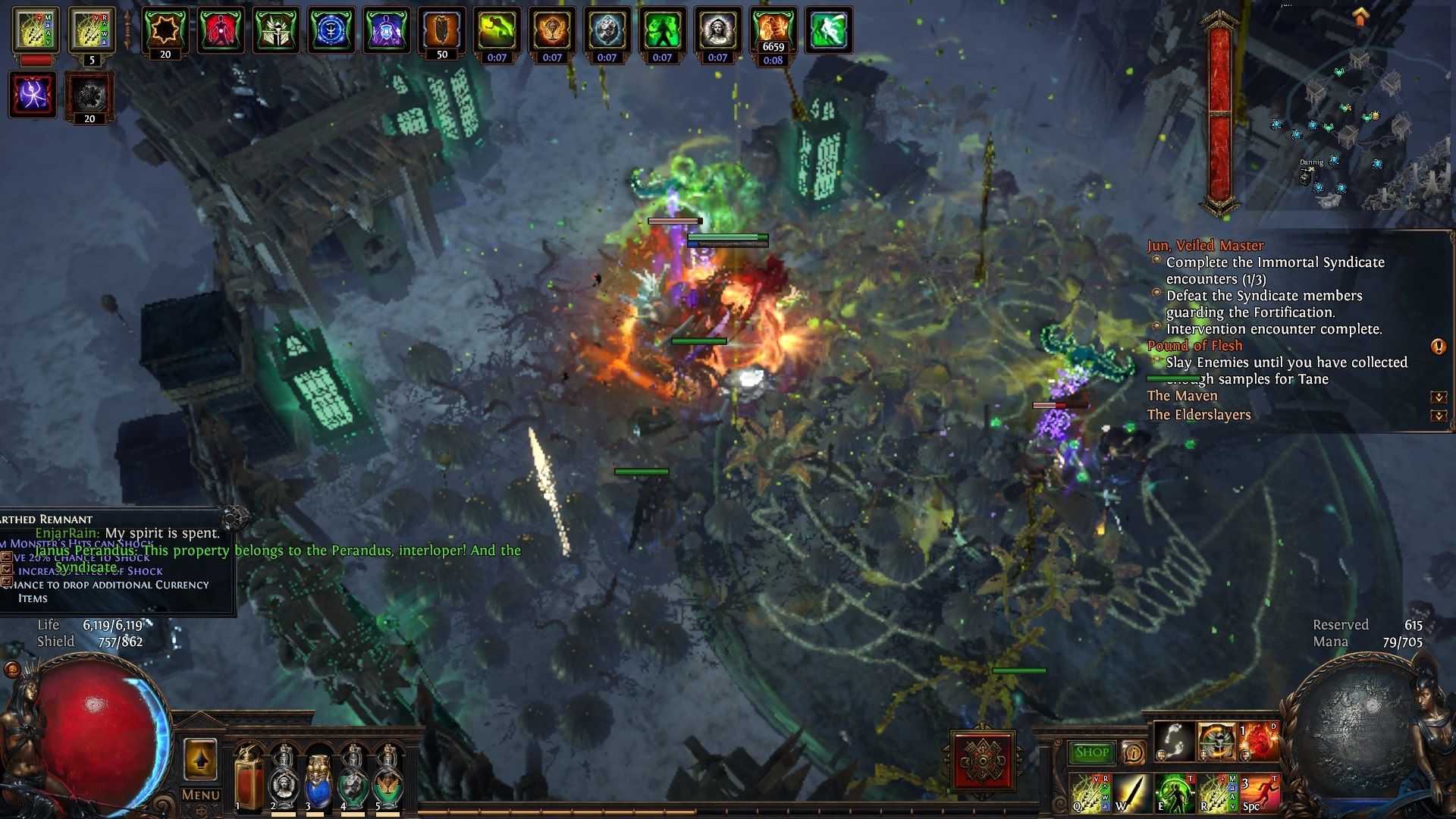 There are several different encounters you run into the syndicate with where you have to fight them. I prefer the ones that are stationary and you can see them in advance. One such encounter I ran quite a few times was running into a fortification where you had to break down a door, kill the healing totems, and take out the syndicate. Another one you have to go into a side instance that is an underground bunker. While you can save creates of evidence for loot my build lacks the burst dps to do what is needed in time. Instead, I just make a mad dash for the back of the bunker to find the syndicate and take them out before you run out of time.

There are other kinds of encounters as well. One is a random ambush that always caused lag and while it’s nearly gone for whatever reason the frame drop slightly when they show up. The other type is transportation you have to stop it before it reaches its destination. 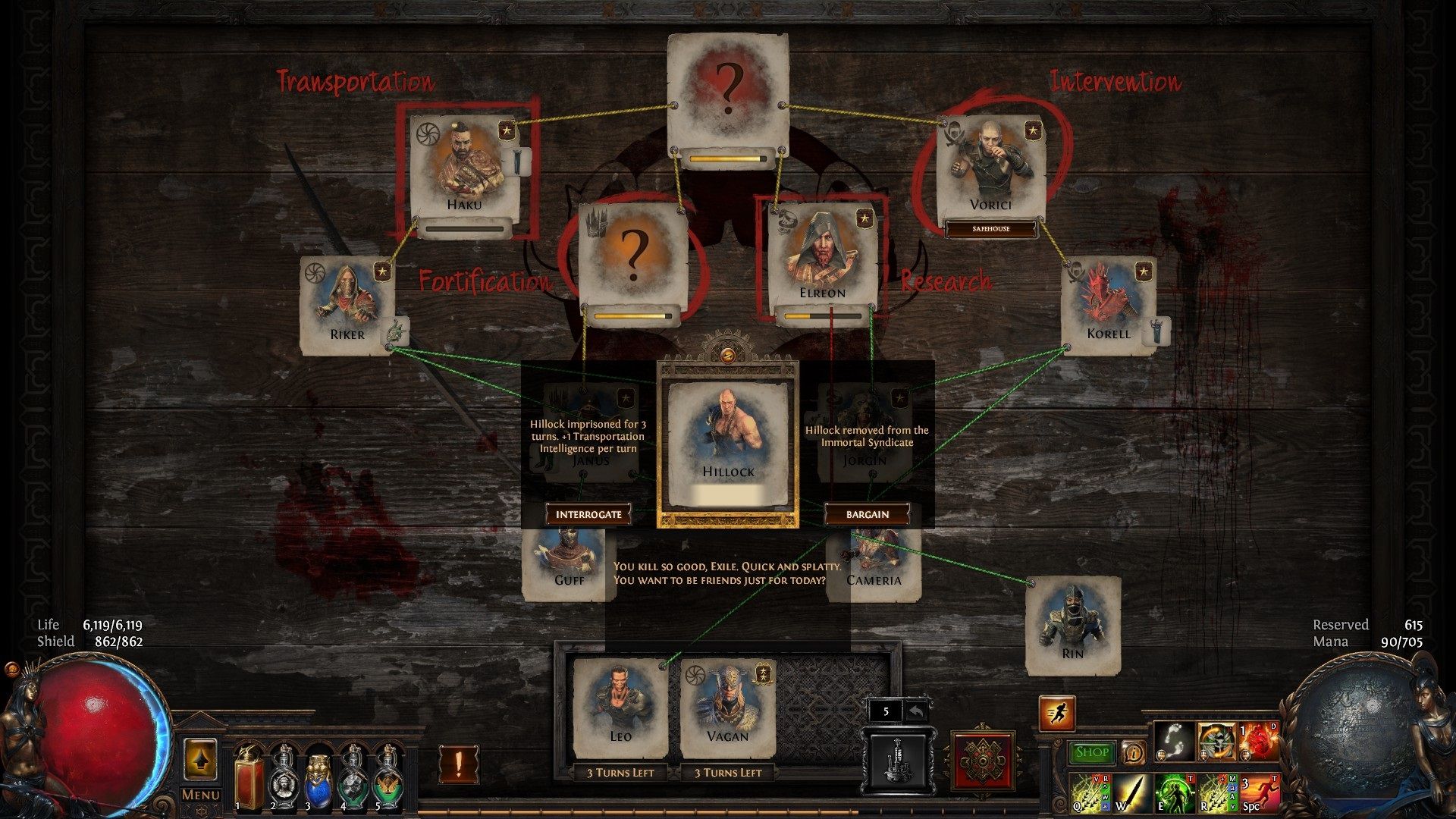 Once you take out the syndicate it’s up to the player to make some choices. These choices have an impact on what happens on the Betrayal board and if veil items drop for you to unveil. In the choice above I could gain transportation intelligence or remove Hillock from the board. Since I already have unveiled a lot of the different modifiers I could from him and I wanted other syndicate members to show up. I selected the bargain option and kicked him from the board.

Once you gain enough intelligence in the different branches you get to raid their safe house for loot. Since I was not focusing on or knowing what the best choices are for who to promote and who to have in each branch the rewards were less than thrilling.

The only good thing about running the safe houses is you can clear or run through very dense packs of monsters to get to them. While they did not appear to be as rewarding as Delve experience is. It was a great way to farm some experience that was better than running maps at least for me. The best loot I ended up getting from raiding several different safe houses was a couple of scarabs. Bonus points for me as they were Sulphite ones which I needed. Outside of that and getting more items to unveil nothing that special. From running 17 maps with Betrayal in them I looted many dozens of items to unveil. Some of them I wanted and will come in handy when I need to craft some upgrades. While I wish it was -10 mana as it shows. On the standard crafting bench, you can get either -7 or -8 and that is one I wanted. I even looted quite an impressive ring while fighting the syndicate and ended up crafting onto it myself non-challenging skills using less damage. While I don’t have a use for it as of yet and wish the giant cold resistance on it rolled as lighting. This ring could easily replace one of my other rings allowing me to not have cold resistance on other pieces if I end up in that situation of having more lighting resistance elsewhere. I also want that chaos resistance on the ring.

While I know the Unset ring I now have can be worth a decent chunk of currency I’m going to try risking it. I have not put into the Blood Crucible items I plan on wearing for a while now. While it could be ruined forever you know never if I luck out and get something amazing rolled on it with a negative modifier I don’t mind.

The main purpose however for running all these Betrayal maps ended up being a failure almost. One of the syndicate members I needed on the board that has yet to be seen drops chests with a modifier I’m wanting. 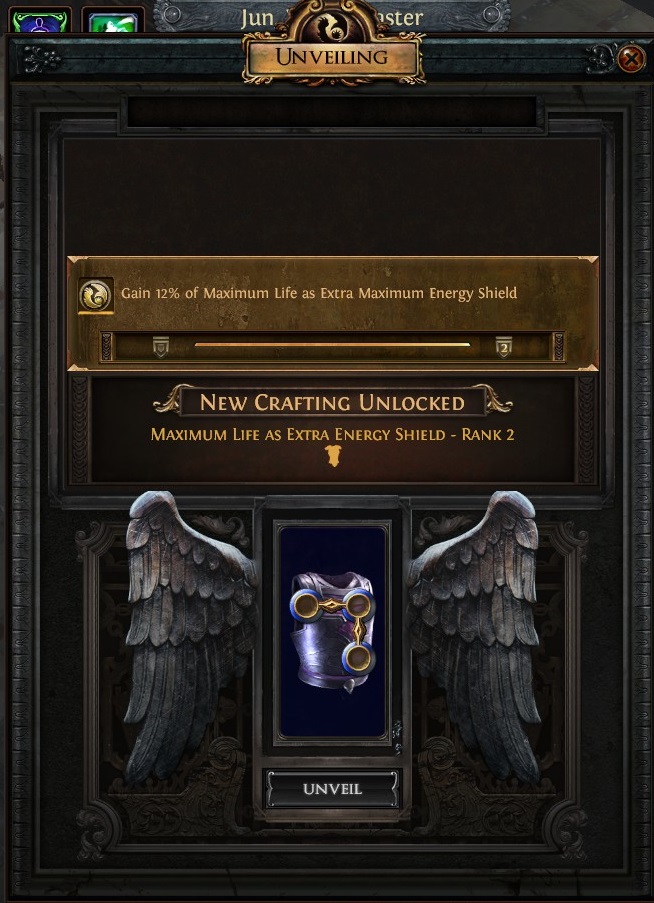 The good news is you don’t have to loot the item yourself. You just need to unveil the modifier you want. Some players know this so they end up selling unveiled items on the market. For just 5 Chaos I unlocked for crafting maximum life as extra energy Shield. It took contacting several people as I was not the only one on the hut for this modifier. 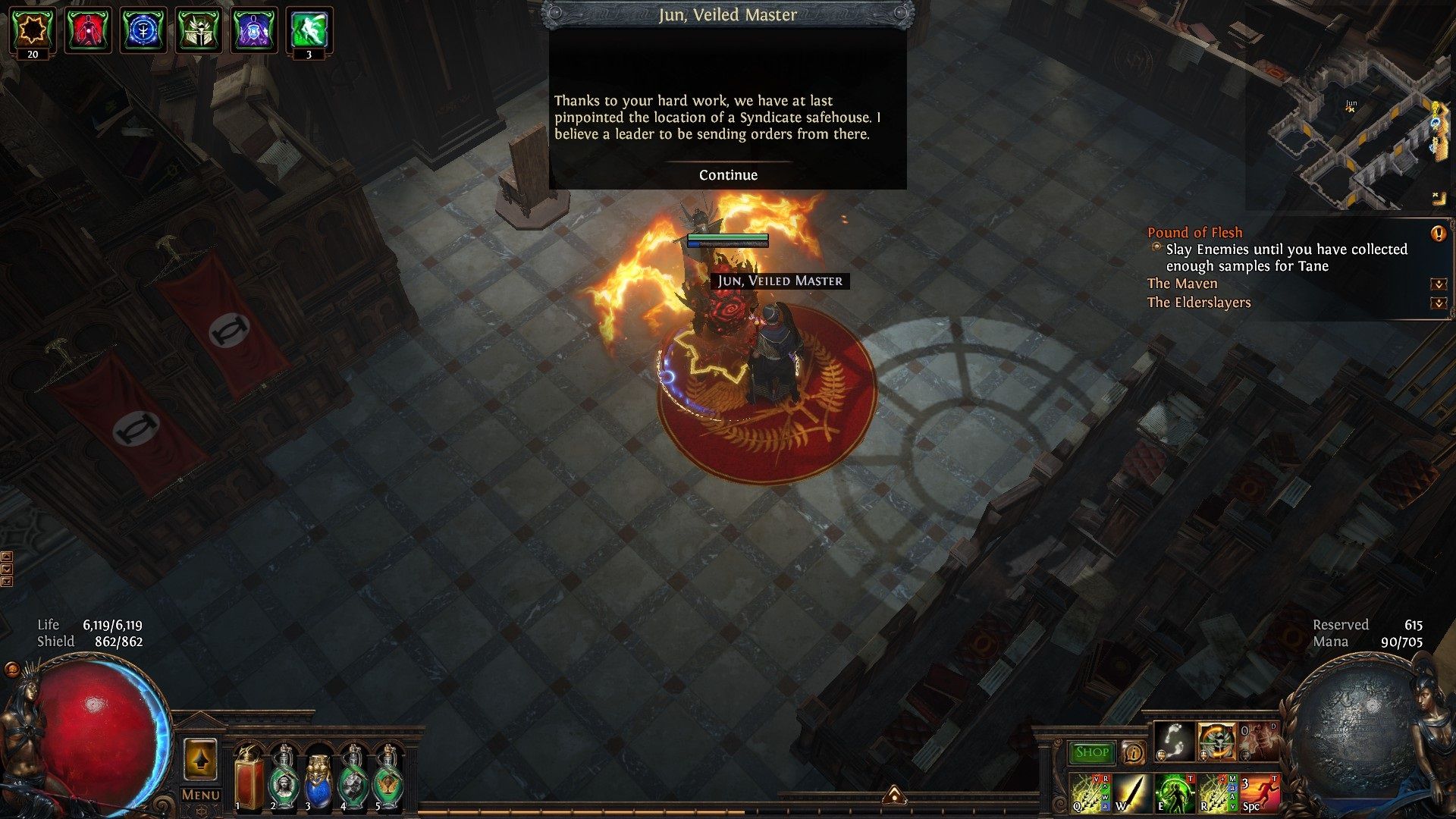 It was an interesting experience running a bunch of betrayal encounters again. Since I still have a few more modifiers I would like to get. I think I’ll end up running them instead of skipping over. I’m also closing in on seeing who the mastermind is behind all of it and running one of the end game instances for Betrayal. Who knows the syndicate member I’m on the hunt for could have been up to there this entire time waiting and hiding if I’m not mistaken.