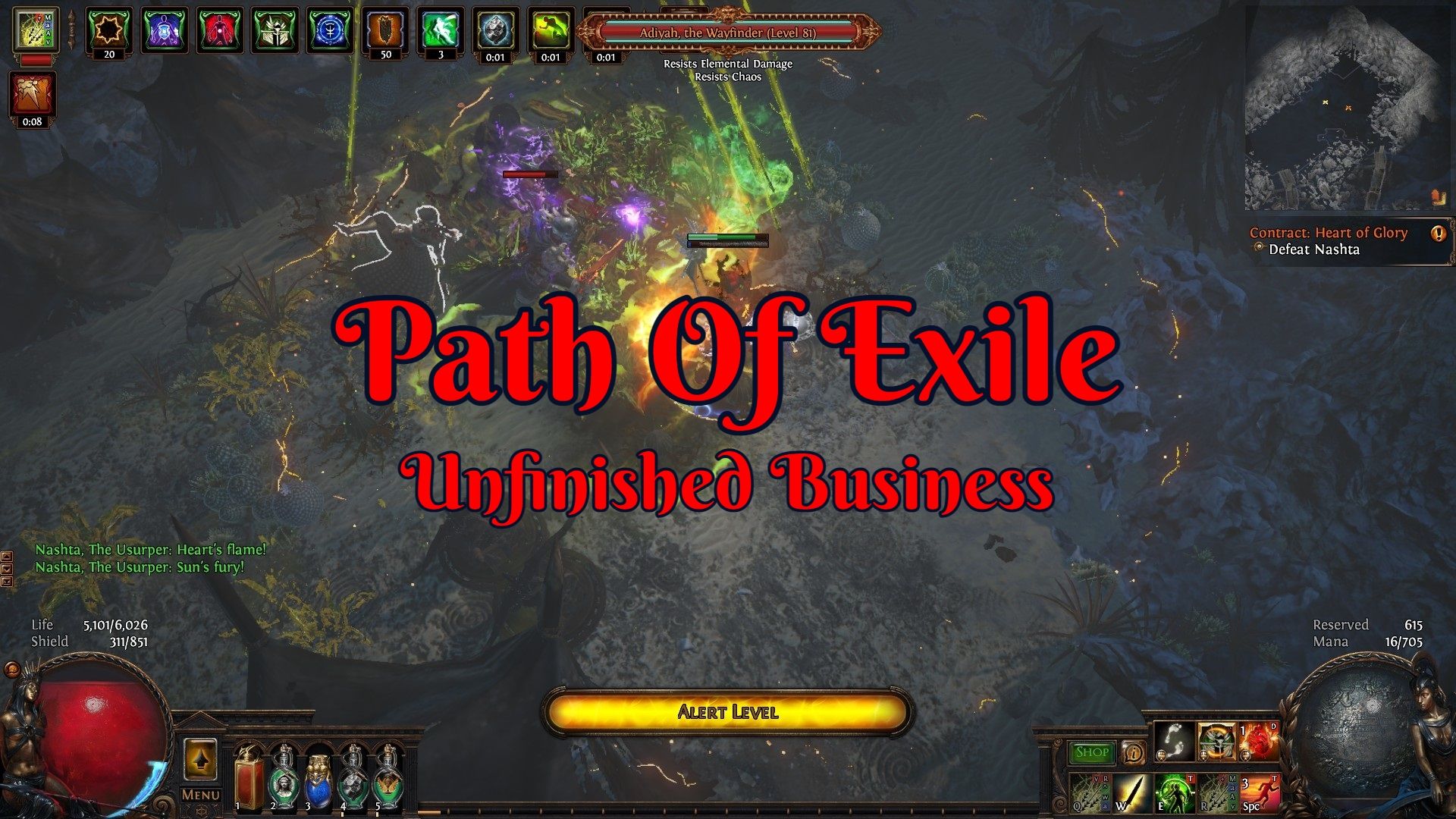 I had some unfinished business to attend to in a few areas of the game. There were some burial chambers left in Delve. Along with some grinding of crew members levels in Heist with some revenge being served. I have also been upgrading my gear and making some changes to my skill tree. 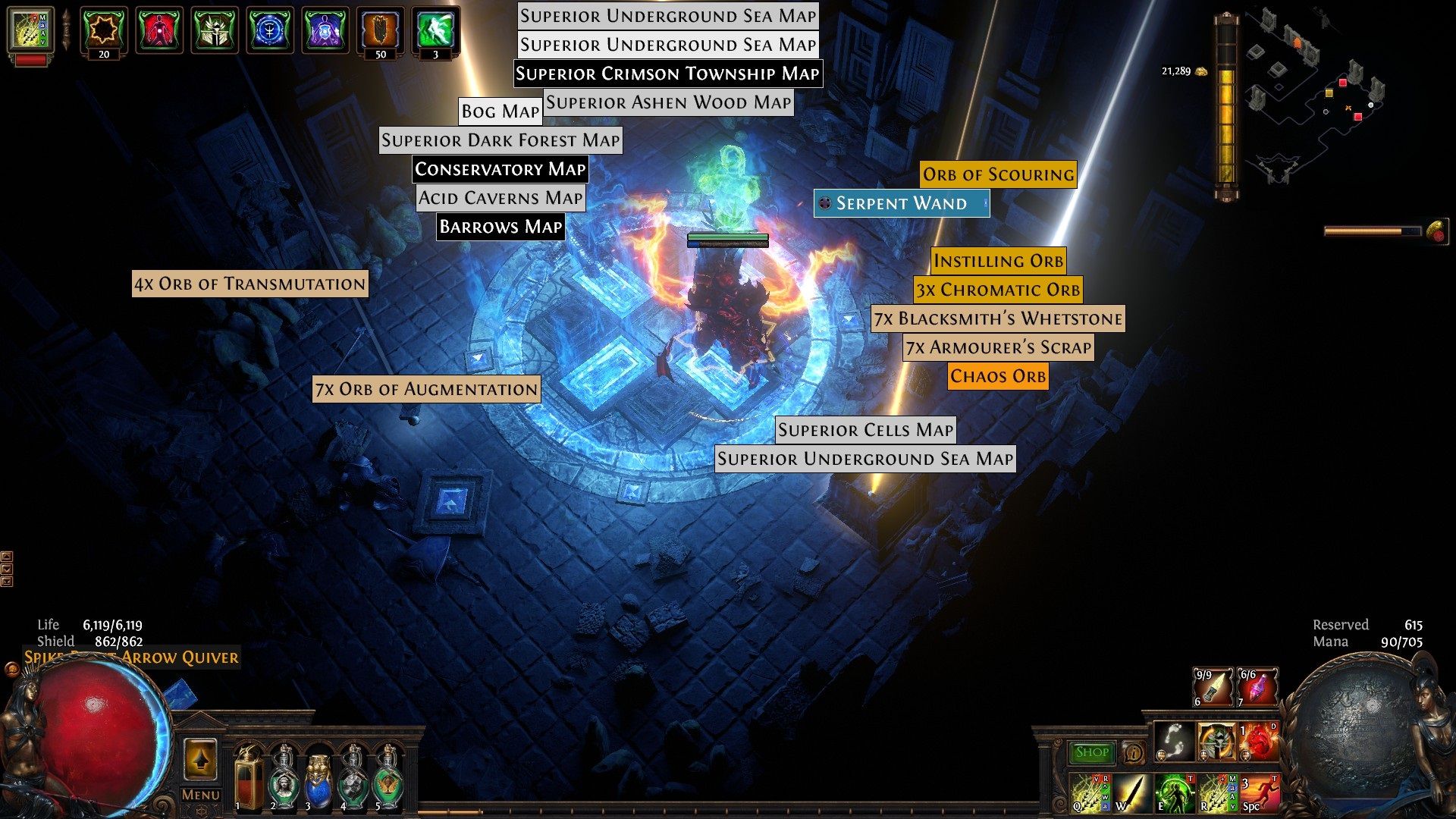 Yesterday I stopped with several burial chambers left that I had yet to run. While I usually hate leaving things not finished it was all about getting to depth 256.

There were another two chambers at 256. Unlike what happened yesterday things went a lot better. I’ve started to pay more attention to what monsters are doing and why they have become so deadly. They are casting chaos damage over time (DoT) to me and that is quite the weak spot I have.

DoT on my character causes quite an issue with my energy shields that are the lynchpin to my survival. I ended up dropping the skill Blood Rage several days ago as it would eat my entire energy shield along with cause regeneration issues.

A chaos DoT is not the only thing some of the monsters are casting on me as well. There is also a fire DoT among some other spells. The area I’m in appears to be quite deadly. Thankfully I had some upgraded gear that I’ll talk about later on that saved me quite a few times when finishing off the remaining chambers in the cities I had found.

I’m also quite stocked up on Sulphite to keep running more nodes and go deeper. That however would need to be for another day. As I had many other things I wanted to work on for the day. While nothing insane dropped I now have more maps than an explorer at this point. I need to get around to just running maps without Sulphite farming to speed things up since I keep hitting my Sulphate cap. That will however need to be for another day.

The only maps I did run for the day were for Sulphite as I had bought 11 Sulphite Scarabs from other players. Different kinds of scarabs for those who don’t know when added with a map in the map device add that event to it. I have Sulphite coming out of my ears at this point. 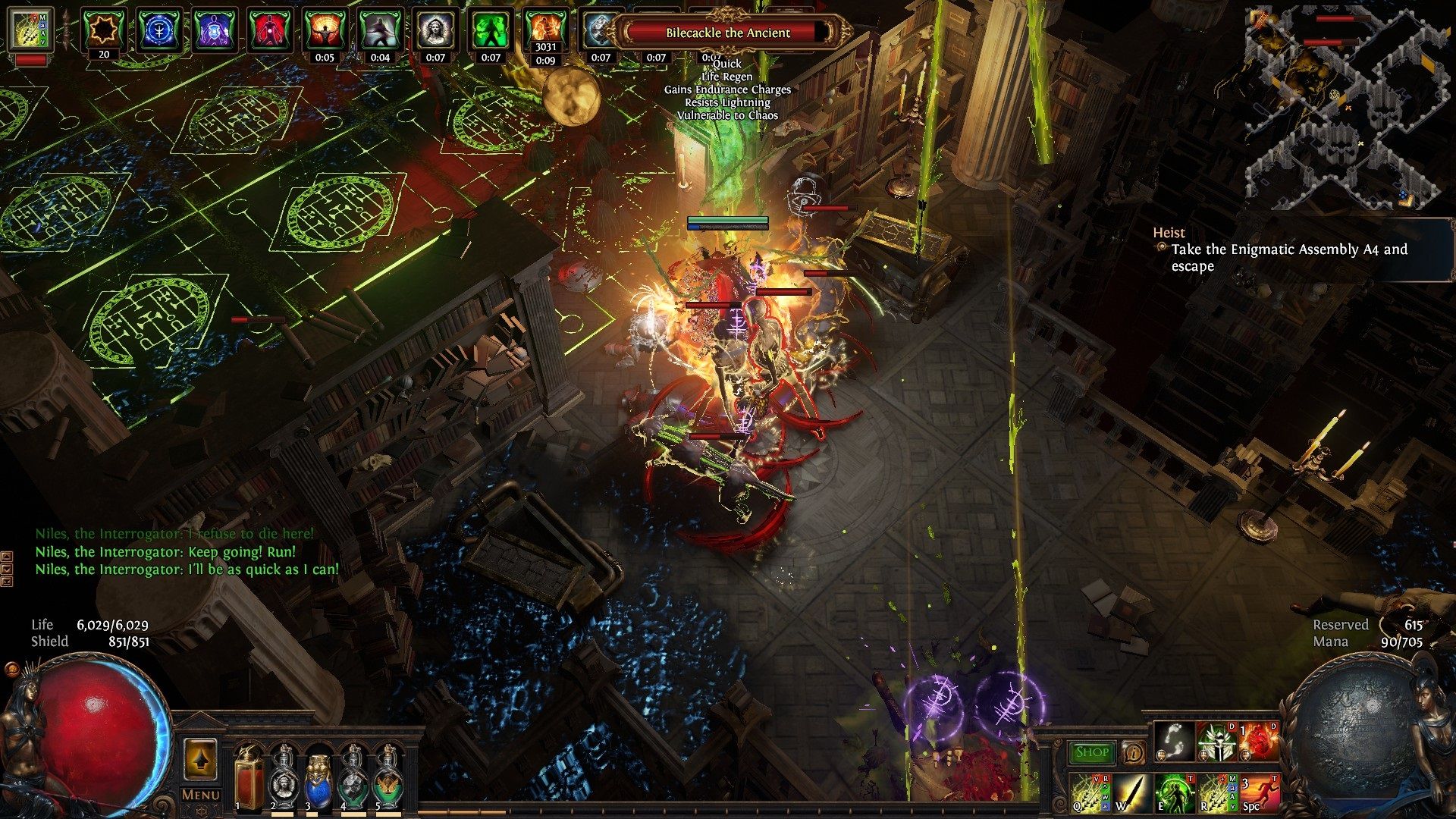 As it would be I had another 22 normal heists to run. There was also that matter of getting killed last time. The majority of my crew were getting close to reaching level 5 in their given profession so it was time for another large grind.

The first order of business for Heist was getting some revenge. On day 16 while running a Unique contract called Heart of Glory I failed. At the time I had massive issues with mana that I have since resolved. While the fight was quite rippy and I almost died a few times I got the win in the end. It was not your normal contract.

After that, I checked the stock of Heist contracts I had. I came up short of having enough lock-picking ones to get my crew member into level 4 ones. So I bought several off the market from other players. Thankfully at the time of day everywhere was rather snappy and it did not take long to buy some.

I ended up having zero deaths while running all 22 of the normal contracts I had. While the experience during the higher-level contracts is decent. I got killed a few times during the day doing other things. So I started and ended the day with around the same amount of experience. This is what I’m using at this level in the game. Running so many of these Heists now I’m starting to get a rhythm down for doing them. While I still could be quicker there is a point where you are not enjoying things as much as you could be by going any faster. Heists are just so fun from all the loot you are stealing and the far-off moon chance of finding something massive.

From the nine different crew members, you have. I managed to level quite a few of them for the day. Now five of them have their main profession maxed at five. There is one crew member that can’t have a level five as he is a “balanced” member from my understanding. The remaining three are at level four and are getting close to leveling up. I might end up running some Grand Heists and just finishing off everyone’s levels that way as it has been quite the grind.

I also managed to loot several profession level five gear for some of them to wear. This is part of the game for the Heist mechanic that I still need a better understanding of what I should be focusing on getting them overall. For individual skill and a general increase in the rarity of loot, they all have gear boosting them now. 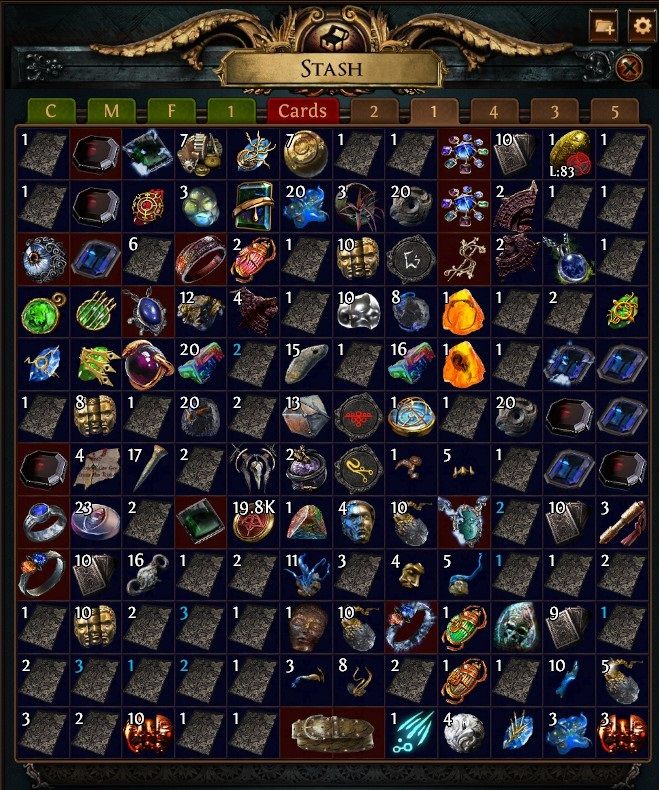 Unlike days before I did not find anything of high value this time around. I did a lot of looting and thankfully anything of value was quite easy to trade into currency I wanted in the game. While there might be 30 Chaos or so worth of stuff I’m still trying to sell anything that I wanted more or less already has been sold.

A lot of stuff was not worth much and either got junked or stashed into storage. In the case of the divination cards, I just put them in their stash tab where I’ll mass turn in a few days when it’s time. Most of the jewels and amulets were junk and I tossed them.

The total take from running Heists was 248 Chaos Orbs (around 2 Exalt.) Between all the different currencies I had including Rogue Marks there was 164 Chaos worth. Stacked Deck’s bought in another 54 Chaos. With about 30 Chaos in other sales or stuff still listed. It is not a bad day. 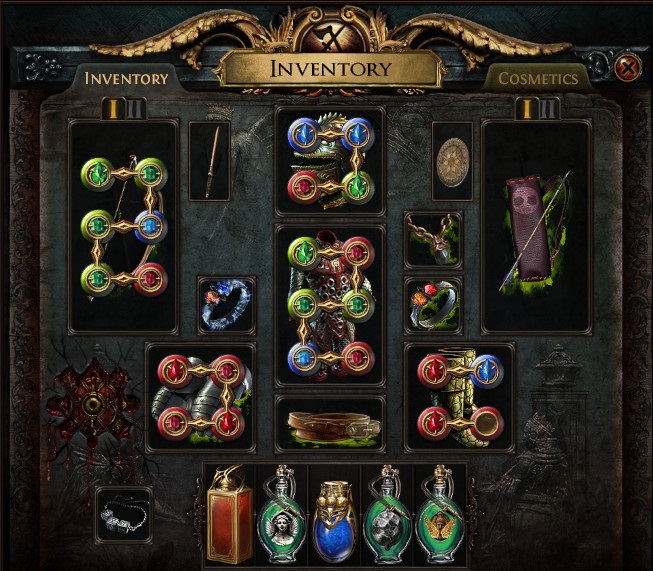 You might have noticed over the past several days I’ve slowly been making some changes to my gear increasing my stats. I also lucked out and got some decent deals on some new gear as well. Anything else I want to upgrade is going to cost a fair amount and can be quite difficult to find someone with one willing to part. 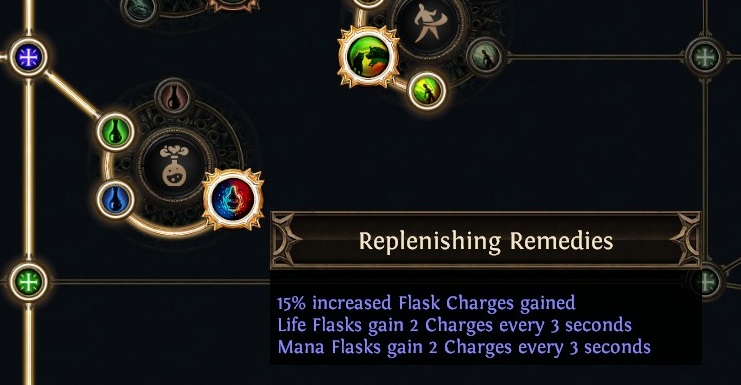 Mana has been a struggle since I switched over to Toxic Rain on day 2. While I have tried things like buying a ring that had -7 to the cost of skills on it. That helped but was still not enough. I ended up moving around some of my passives and picking up ones that granted plus to gaining flasks charges every three seconds. My issues for at least what I’m doing now have been resolved.

While I had dropped carrying second mana flasks once I got -7 to cost on a ring. Getting Replenishing Remedies passive skill has cemented my choice in doing so. I ended up replacing the mana flask with a Silver Flask that grants Onslaught. I further rolled gain changes when hit and use charges when full. Resolving my issue that I felt I was not going fast enough. Now I get lots of boost to speed.

Another area I felt I was struggling with was due to lack of damage and my chaos resistance. I ended up picking up these decent gloves for a fraction of what others were asking for. All I had to do was reroll maximum life craft on it to something higher. This gives me around a 7% Chaos DoT increase and I’m only -30 Chaos resistance now instead of -60. 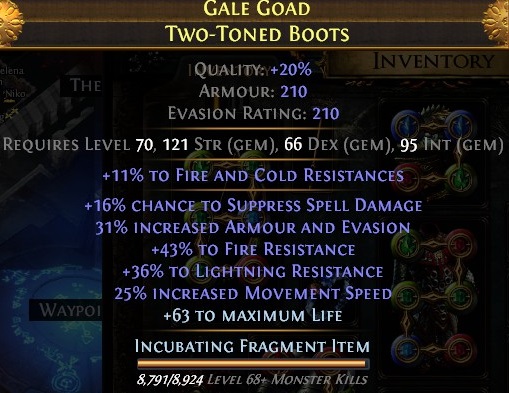 I was quite shocked when these boots hit the market. I for sure thought I was going to be too late in trying to buy them. I needed the suppress spell damage but I did not want to give up a whole bunch of resistance for it. While they are not “perfect” they are good enough for me. This gives me some wiggle room if I end up losing resistance on gear elsewhere.

The next big thing I need to upgrade for damage is my chest piece. The issue is what I need on it is in low supply. Even further a lot of them are pricy and rather lacking in things like life and resistance. The major bottleneck appears to be the crafting mod you need on it.

After looking into how to unlock the crafting mod I need it appears it is an unveiled one. I have something like 16 Veil Master missions and some lower ones that I could run hoping to find it. Which it appears it's quite hard to get. Once I had that I could just look for chests that fit my needs more that I could still craft onto the mod I needed.

One thing I have not gone near yet is corrupting gear with Scrounge. You can easily take a worthwhile item and make it unsalable so there is a high chance of bricking your items. They also need to level up in the Blood Crucible which takes time and you can’t be wearing them. For now, I don’t see myself risking items worth many Exalts for small improvements that could wreck them. It was a decent average day in Path of Exile. Nothing extraordinary happened and I ended up jumping around doing a few different things. Days like today are in part why I still love this game after so many years. If I got bored doing one thing there are so many other things to explore and do. I have quite a few things I’ll be working on in the coming days.