Now being decently geared it was time to start working towards some better farming routes. This will involve farming a bunch of maps. Along the way, I’ll be looking for the Atlas maven invitations and guardians. Outside of getting the normal maven invitations for just running 14+ level maps. I was still on the hunt for getting an invention to a guardian or Elderslayers. I also had not killed many of them yet to be able to use the invention once I got one to drop. It was time to hopefully do something about it.

Some of them were quite easy. Granted I would expect that by now after finishing off the night hitting level 92. I also must be closing in on 15 to 20 Exalts spent on my gear. I was not expecting any of these to cause me any issues so far.

That is not how this day went down. While I was expecting the occasion death I was expecting to always get the kill in the end. Since I took Guardian’s Aid in the Atlas passive skill tree it made things harder since the guardian would heal at 33% life and one of the others would join in. 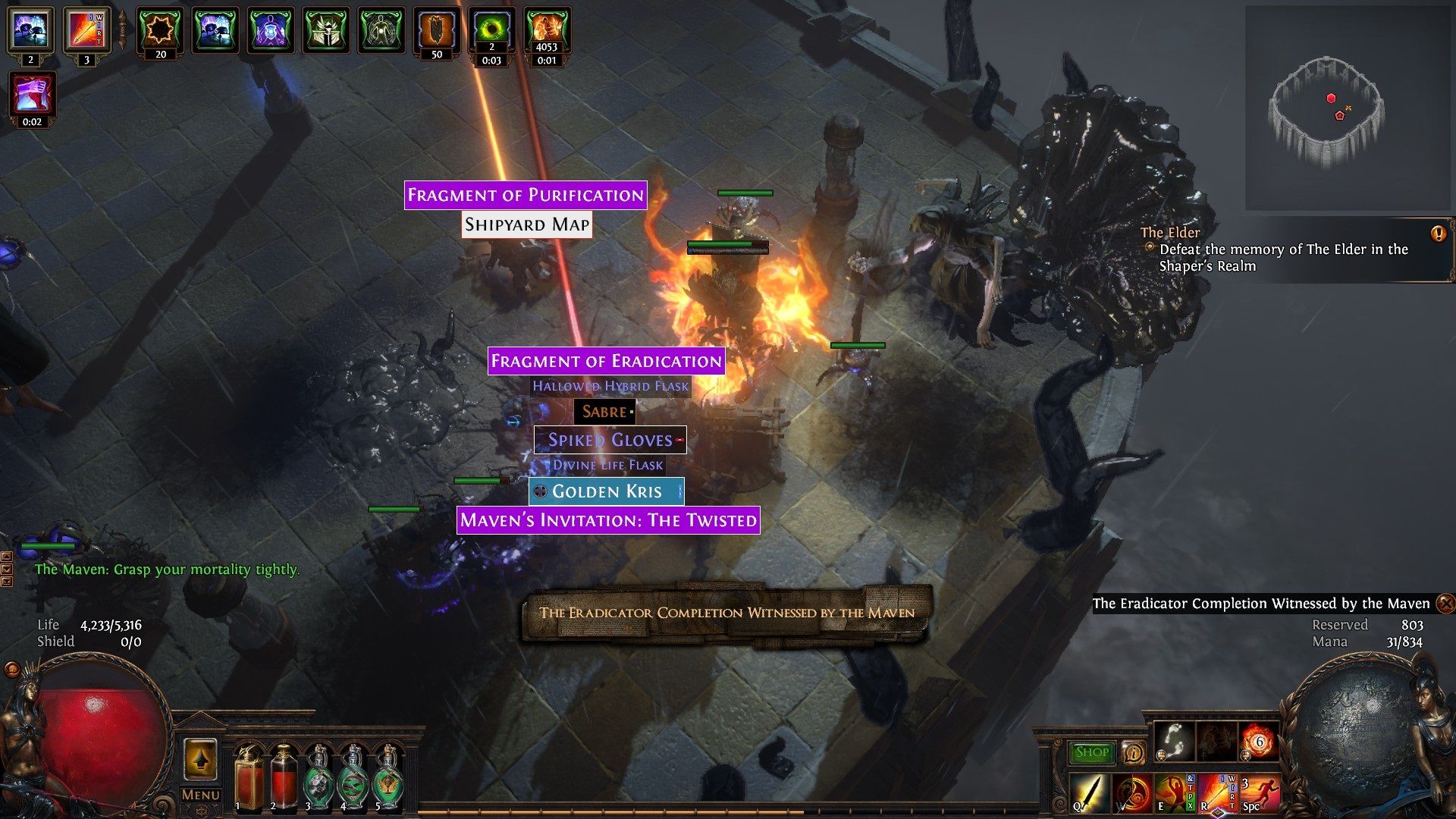 This also meant that I had an opportunity to get a lot more loot. Either or both guardians could drop their fragment. Fragment prices were starting to go up a little bit as the Path of Exile economy expands. You have many boss farmers above me wanting to buy the fragments instead of farming for them themselves. 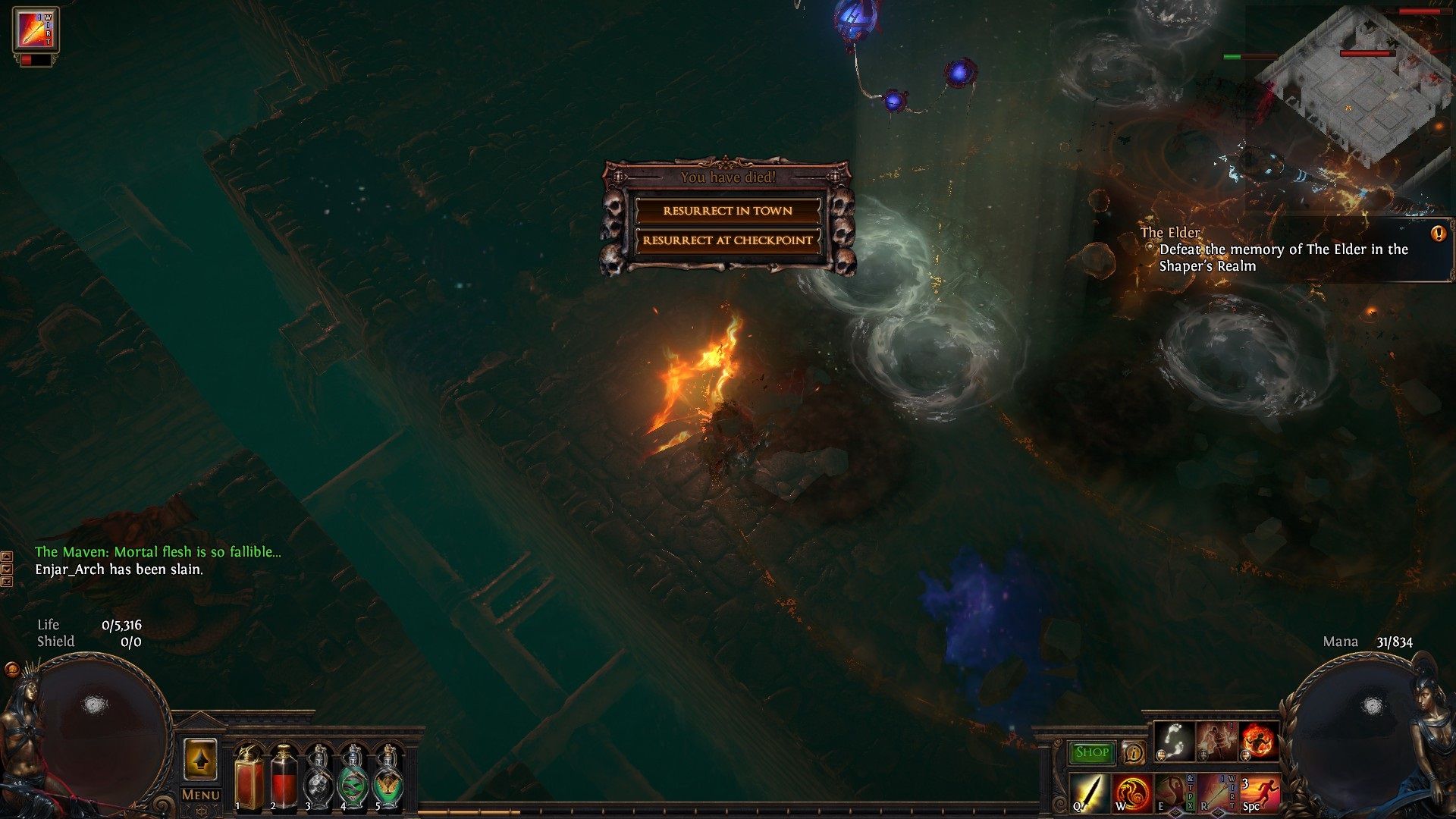 I was hoping to be the higher-tier boss farmer in this league. I’m just not feeling it with this build. You would think I would no longer be getting one shot at the easier stuff. Yet that is still the case on occasion.

Since I was farming quite a few maps in between getting ones that had the guardians on them. I was racking up the 10 tier 14 boss kills I needed for another maven invention. The lower-tier ones are not normally that great of loot. There was however a change in this league that made me want to farm the lower tier ones. You have a chance to get an awakened gem to drop. I ended up selling that droped shown in the screenshot for 1.4 exalts. While in the past some of these gems have been worth 20 Exalts or more. This time around I expects them to be more common with the change and with it a lower price.

I was also running into a bit of an annoying issue with the guardians and maven runs. My totems would die far too quickly to do much damage if any at all. While it was great I could drop them and run. Many times I had to run back and spawn in more as they got targeted down and destroyed just as quickly as I was deploying them. Something I have not had for many leagues now has been a decent helm enchant I wanted. The damage on this build just seems lacking to the point I wonder if this is a critical thing. While they were supposed to make it easier to get something you would want. That still does not mean you will get something useful for yourself.

I ended up running a few more times. During all my mapping runs any time I had the opportunity to run a trial for a goddess token which is required to run the highest tier of labs I went for it. I don’t quite recall how many I had.

I spent a little over an hour running labyrinth over and over again. This late into the league I doubt any of the unique that can drop out of there have much value left. The only thing valuable is getting the helm to enchant I want to add to my gear.

In the past when I’ve had the helm enchant I’ve wanted I always bought them from other players. There used to be more of a larger community that ran them with the ideal helm for more of the popular builds out there.

These days getting the helm I want on the market with the enchant I also want is just not a thing. Unless someone else who is playing a similar build to my own got them an upgrade and is selling their old helm.

I was yet again skunked in my runs. Outside of a couple of chaos drops, it was not worth my time. Frustrated and tired I gave up for the evening. I’ve run quite a few of these now this league I’m shocked I’ve not gotten one of the five different enchants I’d be willing to put on my helm. 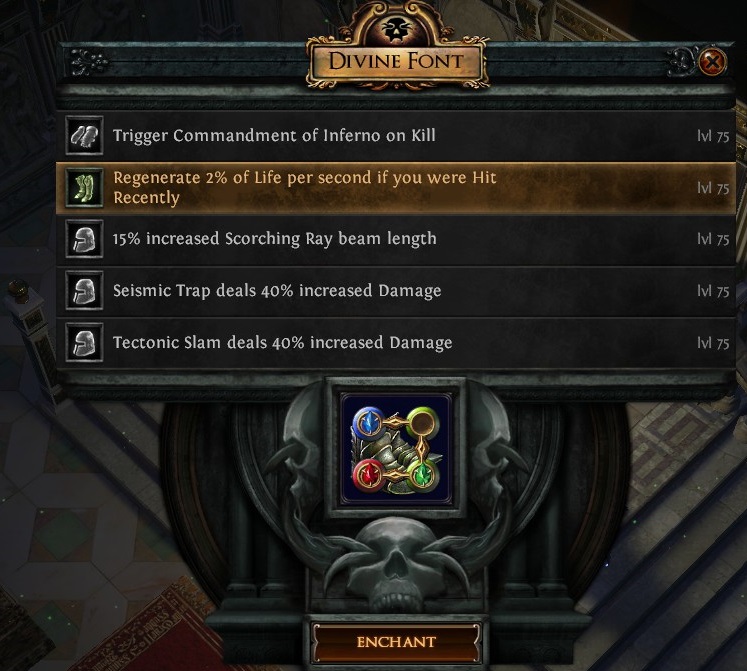 It is all about luck and having the enchant device in the final room have something you would want to use. The screenshot above is from a former run when I got the boots enchant I wanted. The only other thing would be glove enchants but I don’t feel I want any of them for my build. 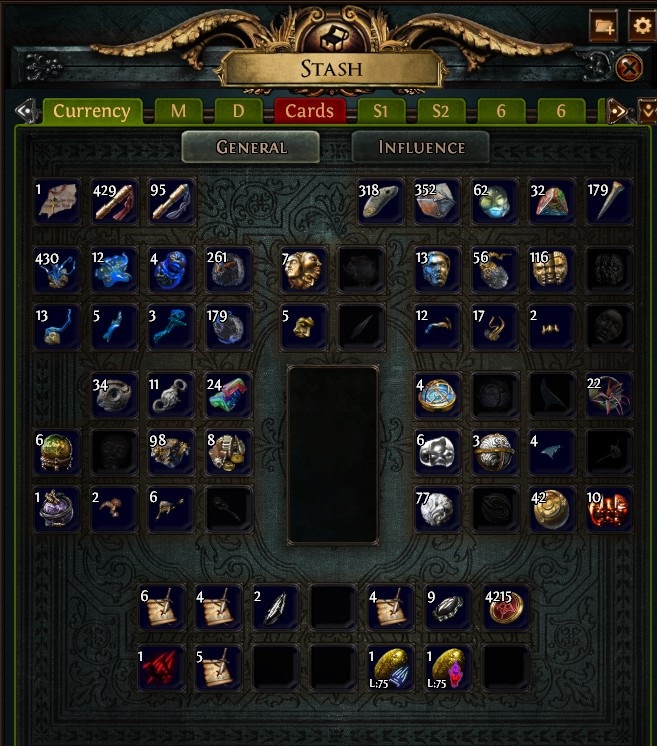 I’ve concluded that I’m rather disappointed with how much I’ve invested into an explosive arrow built with the outcomes I’m seeing. The damage just feels lacking and out of nowhere it just drops dead. It’s not as fun as I was hoping.

While I could keep investing further it’s hard to farm when you run into certain situations where you can’t even damage an enemy. This is despite having some fire penetration and other skills to try and negate resistance some of the harder things have.

My recourse is to level up another character and try out something else. I’ve been wanting to play a skeleton mage build for a little while now. While it won’t be as “tanky” as my explosive arrow has been I don’t feel it’s tanky as all compared to my character from last season anyways. The skeletons and horde of minions should be for some interesting and fun times.