I wanted to blast through the remaining Heist contracts I had to level up my crew as much as I could. I then would run some Grand Hesits I had picked up. With the hopes of getting a high-end drop or a trinket for my character. This will also be the last heists I run for a few days as I rebuild my stockpile of contracts.

For the most part, the normal Heists were rather uninteresting. I did have one strange death and an instance of losing my internet connection as well. Both have the same kind of consequences in Heist, you drop everything you were attempting to steal. You can’t enter back into it getting the items. Such losses are painful but that is just how they are. 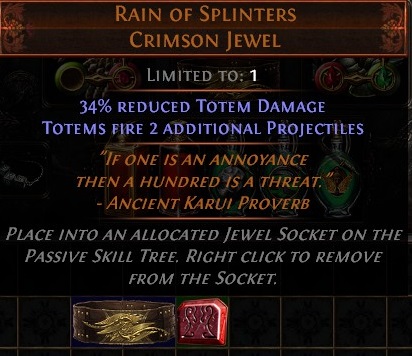 Naturally, as I was running my Heists I got some drops I wish I had at league start. I got both the belt and the crimson jewel I spent a mint on at the time to acquire. They were not upgrades so I won’t be keeping them either. While they are not worthless yet they are no longer selling for anything they were the first half week of the league.

This seemed to be the day of drops I could have used. I also picked up a Tabula Rasa and some other items as well. The good news is I have plans to level up a new character soon. So having more starting and lower level items will help aid me in doing so. 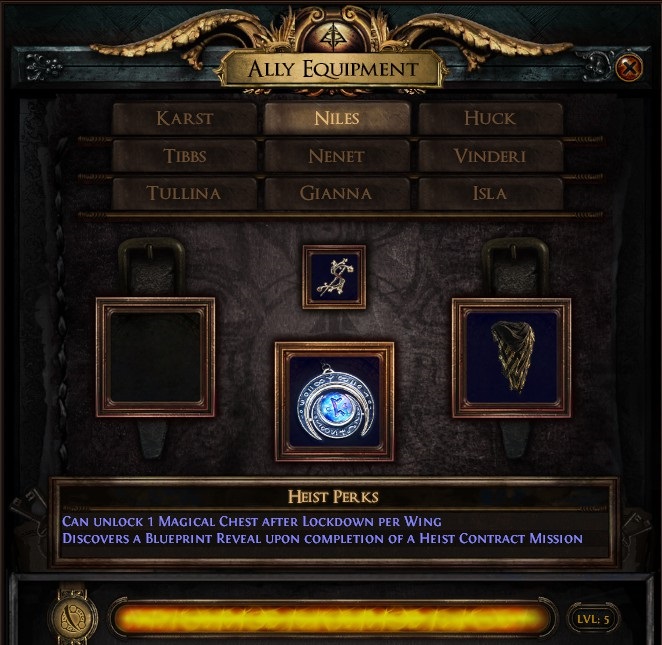 The gear I have for each crew member is not that great as of yet. With 9 crew members, it can be a bit to take care of all their needs. Even more so if you only run some types of missions on occasion as they are not the highest yielding for rewards. Many however over the remaining of the league will be required at one point or another in a Grand Heist.

For now, since I only have low-level Grand Heists to run these will do. All their gear so far I have looted while running normal Heists. I would then drop alchemy orb on them to make them rare gear and move on to the next piece.

I have not spent much on rerolling the gear or aiming for certain stats at this time. I still have yet to acquire a thief’s trinket for my character which is the main point in wanting to run some Grand Heists since I have one that has currency or thief trinket as a possible reward type.

Once I get a trinket I’ll have more incentive to invest in my crew's gear somewhat and make it in line with my own if possible for a better chance at drops. This stuff tends to be rather cheap off the player's market as well. I might just end up buying what I need for my three most used crew members.

After a few hours of grinding it was time to head off and do the Grand Heists. I had two of them to run. One o them I was hoping would make some decent returns on or at least get a trinket out of. The other one I was not having high hopes for but I wanted to run it anyways.

Unlike past leagues where I’ve played around by spending a fair amount of the Rogue’s Marker unlocking extra wings to run and more side areas to clear. I was going to be rather cheap this time around. I only invested to unlock a second wing to run and that was it.

I was sitting on nearly an Exalts worth of Rouge’s Markers. I suspect the markets will get quite flooded with them soon enough. I would prefer to sell them for an Exalt than having to sell them off in smaller amounts for chaos orbs and then have to trade in the chaos for an Exalt later on.

League inflation was something I had on my mind. I have not always had this league time at the end of each of my play sessions to spend ten to twenty minutes to try and upscale all the different currency I have been looting.

As the hours go by and depending on the time of day my spending power in the game is decreasing. The best way to try and counter that at the level I am at is to get things into Exalts. It will cost more and more of the lower-tier currencies to buy a single Exalt as time goes on.

While there might be some slight market crashes in an expected pattern. It tends to be the best idea. So I wanted to get my Grand Heists done without spending too many Markers since it will be a while till I do another large batch of Heist runs. While I will pick some up while mapping it’s not going to be the amounts I am getting at the moment. My first Grand Heist did not have many interesting rooms to run without further investing in it. The more you spend the greater each unlocks costs. You can only open so many chests before you trigger the alarms. As a result, I rather underspend and focus on my main objective of loot at the end than trying to get an extra low-tier item out of it. 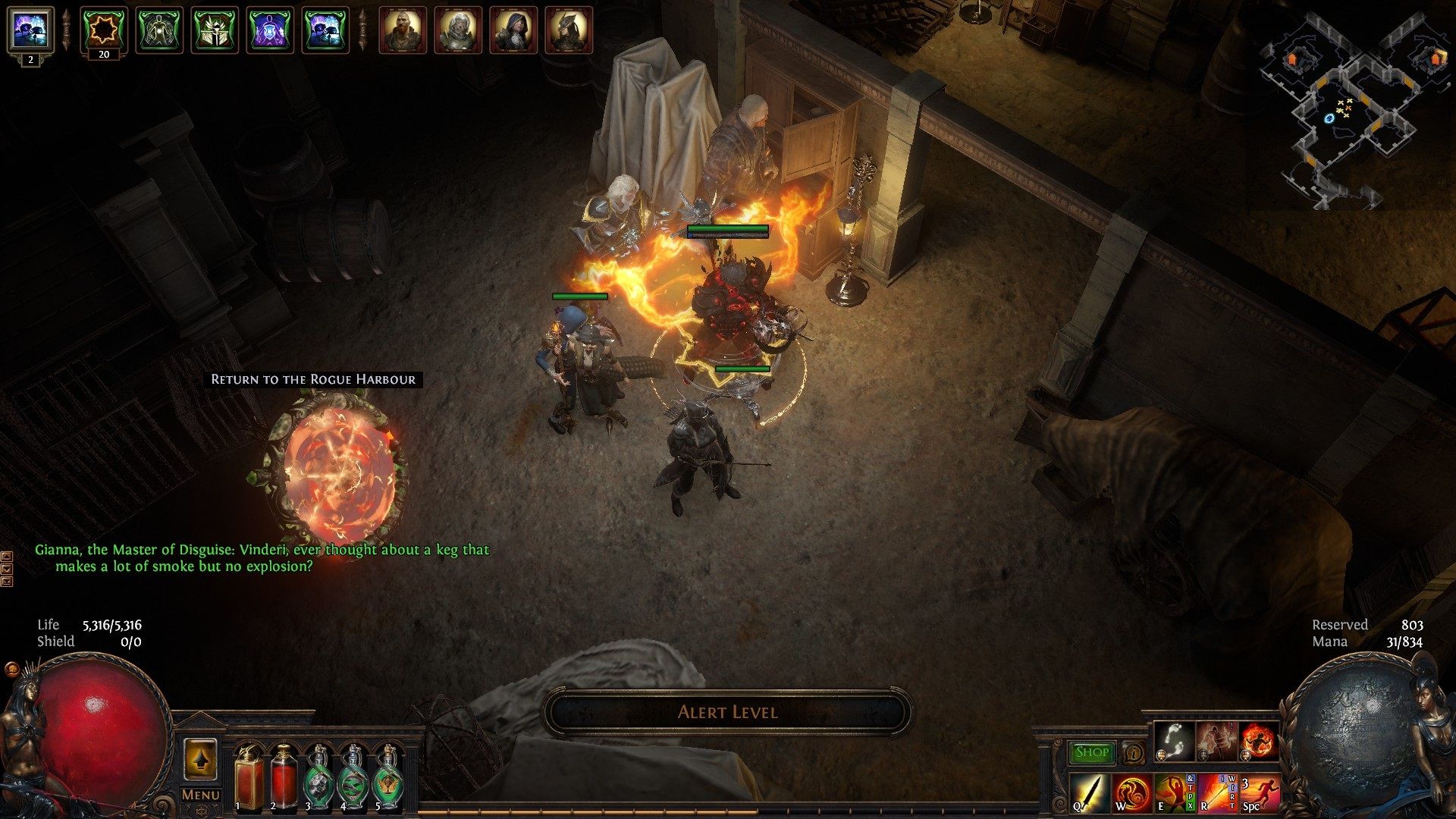 We arrived at our starting staging area. Unlike normal Heists, you can leave and do things like dropping stuff off in your stash tab and then come back in. It’s kind of silly they don’t include a stash in here at this point. They are back entrances into the places anyways. You would think they would feel more like a heist staging area.

As always the crew has a bit of banter between each other. The player has zero impact or control over the chatter other than what crew members they hired for the job. I usually don’t wait for them to finish talking since I’ve heard it all before. I just dive right in.

Since this Grand Heist was a lower tier one I felt like I had zero risk of getting killed running it. In general, my build should not be having any issues even at the higher level ones in the future. The run for the most part went uneventful.

After almost maxing out the alert level that will trigger the alarm I made it to the main objective of the heist itself. The final room is filled with cabinets and as soon as you break one open the others go into lockdown.

As such it’s best to take a moment and see what all the options are. This tends to be where I’ll even do some price checking the best I can without taking too long. While sometimes it’s quite easy to spot what is something worth taking. Many times you are left feeling it all is just junk and in many instances it is. 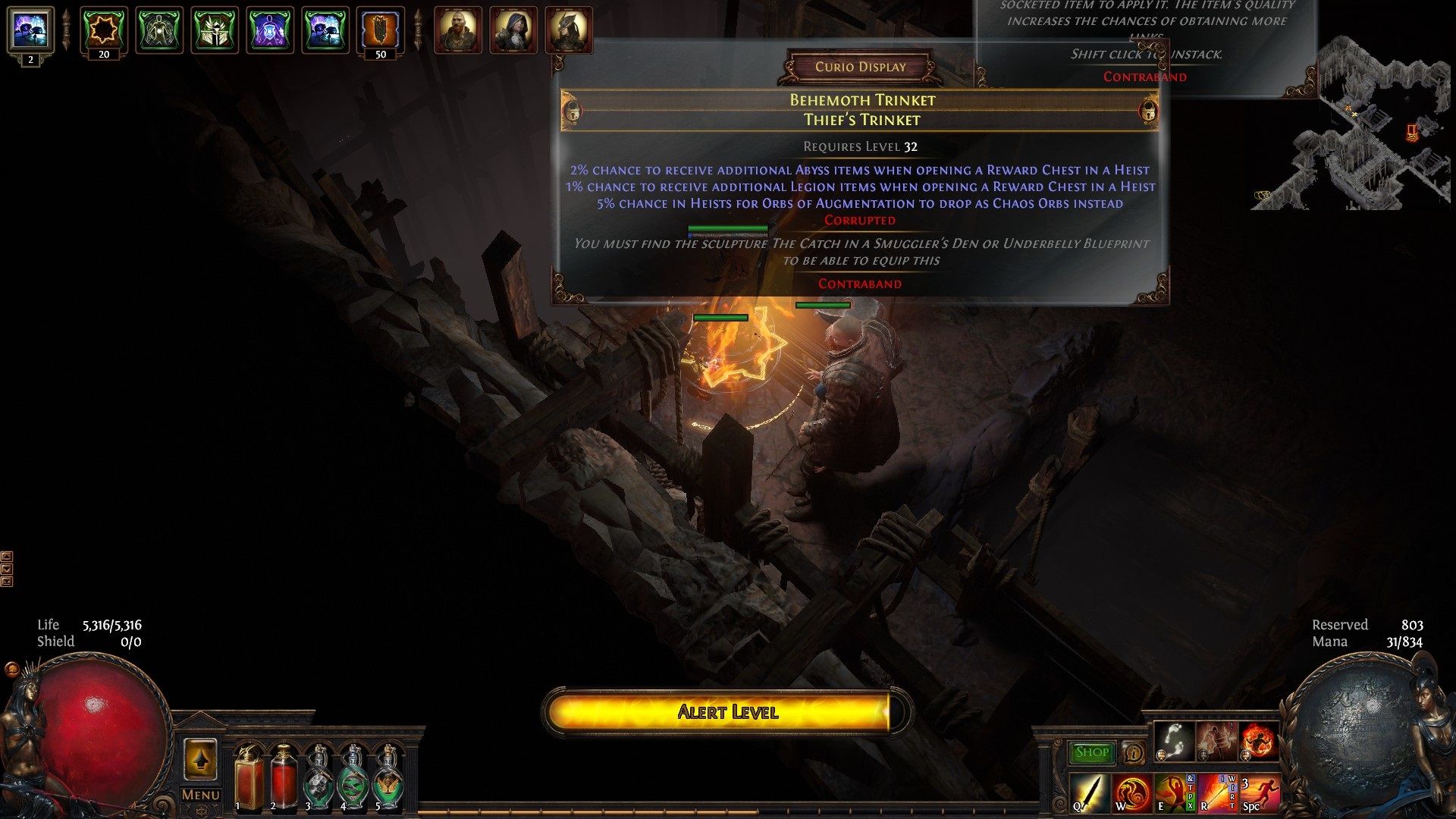 Thankfully this time around it was an easy choice. There was a trinket that increased the chance for augmentation orbs to drop as chaos orbs instead. This was one of the outcomes I was looking to have. While it could have been better it’s not a bad find for the first one. The other stats on the trinket I don’t care for. I was just happy to have a trinket now.

After I broke the case open the alarms triggered. I picked up my item and started to clear my way out. Without any issues, we made it to the exit. All crew members lived. I have been the only one to ever die on these missions. The crew NPCs are not always that bright and the game makes sure they survive.

After this, I went into the next wing. It as well did not have anything I cared about taking with me till we got to the final room. Just in the interest of recovering some of my costs and hoping to get lucky I looted quite a few chests on the way. This wing would not have been worth paying extra for if it was not for one of the reward options I had at the end. This is why it’s best to not overspend on these things even when they are the good ones. The second Grand Heist I ran while it had some better rooms for loot. The main rewards at the end were expected to be total trash. Which is in fact what they were. I kind of knew this one would not be worth the cost to run but I took the gamble and lost. It was not the best day I’ve had this league but it was not the worst either. I ended up clearing 3.6 exalt worth of loot with most of it being currency that I could upscale and spend later on. Some of the other items I’d keep for now or put up for sale later on. The items I would be listed for sale are not worth much.