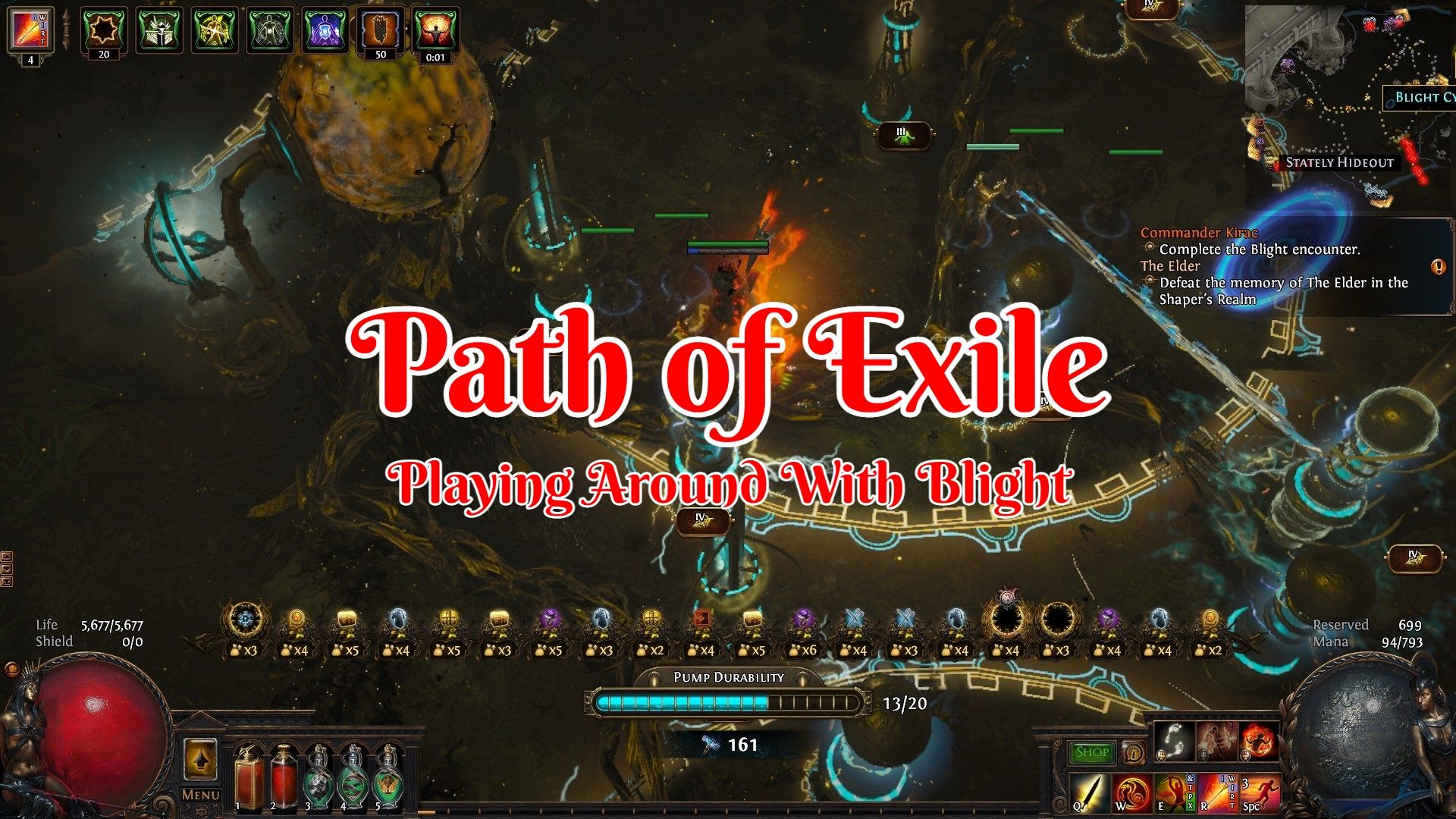 Blight is something I skip over when I’m running maps in Path of Exile. I tend to do one a league so I can anoint items and that is it. Anything I tend to need for that past league mechanic that was added to the core game I’ll trade with other players for.

With many of the changes made to Path of Exile recently one thing that kept popping up on for me to do has been blighted maps. This happens to come from the fact that when you are rolling Kirac missions you can end up with a blighted map option to run as a mission.

I prefer to not burn too many of the reports I’ve looted for rerolling Kirac missions. So when I do have something that I find could be interesting to run I figure I might as well. It can be better than just running a normal mission map.

Blight is one of those things that used to lag back in the day. Thankfully these days they have made quite a few “optimizations” and changes to it that will no longer be an issue for me. I am however quite rusty in running them.

Blight is Path of Exile’s version of a tower defense mini-game you could call it. You have a pump that you need to defend that pumps blight out. As the event goes along many different paths start growing and connecting. Along those paths, you can place quite a few different types of towers.

The pump can only take so many hits before it explodes and the event is over. More times than not if you lose the pump you end up with almost nothing. Making these a bit of a higher risk than running other things in Path of Exile.

It is possible to even when you have a decent understanding of what is going on that you could fail. You could end up with a challenging layout, monsters that are immune to how you usually set up, and some other random bad luck.

You don’t know what you are going to get into until you start. Outside of the level of the map and if you added anything like anoint oils to it to make it more challenging. This can make them quite fun but also frustrating when you lose and walk away with nothing.

If you are successful there can be a lot of loot to go around on the map looting. A little bit of loot will spawn around the pump that you defended as well. There will also be clusters of chests that spawn in as each of the spawning portals monsters are cleared. Blights can also be a random encounter you find while clearing a map in general. These kinds of finds are on a much smaller scale and do not replace the entire map. They are easier to run but provide a lot fewer rewards. Since I was a bit rusty I felt I would run any I found till I got back into the swing of things.

As you can see in the above screenshot I found a random blight encounter. You get a short time to set up around the pump. The icons above the pump durability bar give an indication of the kinds of resistance different lanes of monsters will have. Some of them don’t have any making them easy to deal with.

The hammer icon indicates how many points you have to spend. You start with a little bit to get you started. As you kill off monsters you earn more points to upgrade or build new towers.

What you hope at the start is a single lane that has a bit of a choke area. Choke areas tend to have a few areas you can set up a tower at. Unlike a lot of tower defense games out there, you cannot just set up anywhere. The game has to give you the option to build a tower in an area. This can many times leave you in situations where you don’t get the ideal setup for placement.

After playing around with a few different ways to go. I usually start if I get a nice choke point with stunning, lighting, and an empowering tower. From there I’ll build up a few more lighting towers as needed with the end goal of upgrading some of them to arc lighting towers. They are great for clearing trash mobs but bosses can still be a danger.
These random blight encounters can take a couple of minutes to run. Thankfully there are easier ones if your character is powerful enough you can clear out a lot of the trash of target down any bosses that make it to the pump. Things can get quite hectic so I’m always eyeing the mini-map to see where there is a build-up of monsters. Along with making sure any bosses I start to get some damage on. I might even get some fire towers up and upgrade them to drop meteorites on the bosses if things are going well enough that I have the points.

After finding a few of these random blight encounters throughout the day I felt I got enough practice in. While I did end up failing a couple I was able to handle things a lot better than when I started. I still expected to struggle on running blighted maps but at some point, you got to go for the full things. We can see this one has a lot more loot and portals spawning in monsters. I took this around 2 minutes into the 5-minute blight encounter. I had three main paths I had to defend the pump along.

If I recall it was in a lower level map that I had an option to run from a Kirac mission. This was great for me since my damage from my character could give some needed assistance when I did not have enough towers in place in a lane to deal with things.

You can see the monsters on the minimap as red icons. One way things don’t lag is the graphics of the game get lowered when your FPS get too low. I had quite a few encounters where I was dealing with them in a quite pixel manner.

I ended up running six blighted maps with two of them failing. One of the main reasons people run these is for the oils that drop. They allow you to anoint jewelry. One thing I could do is anoint my rings to give the kind of towers I prefer to use a buff that would make this easier to run. 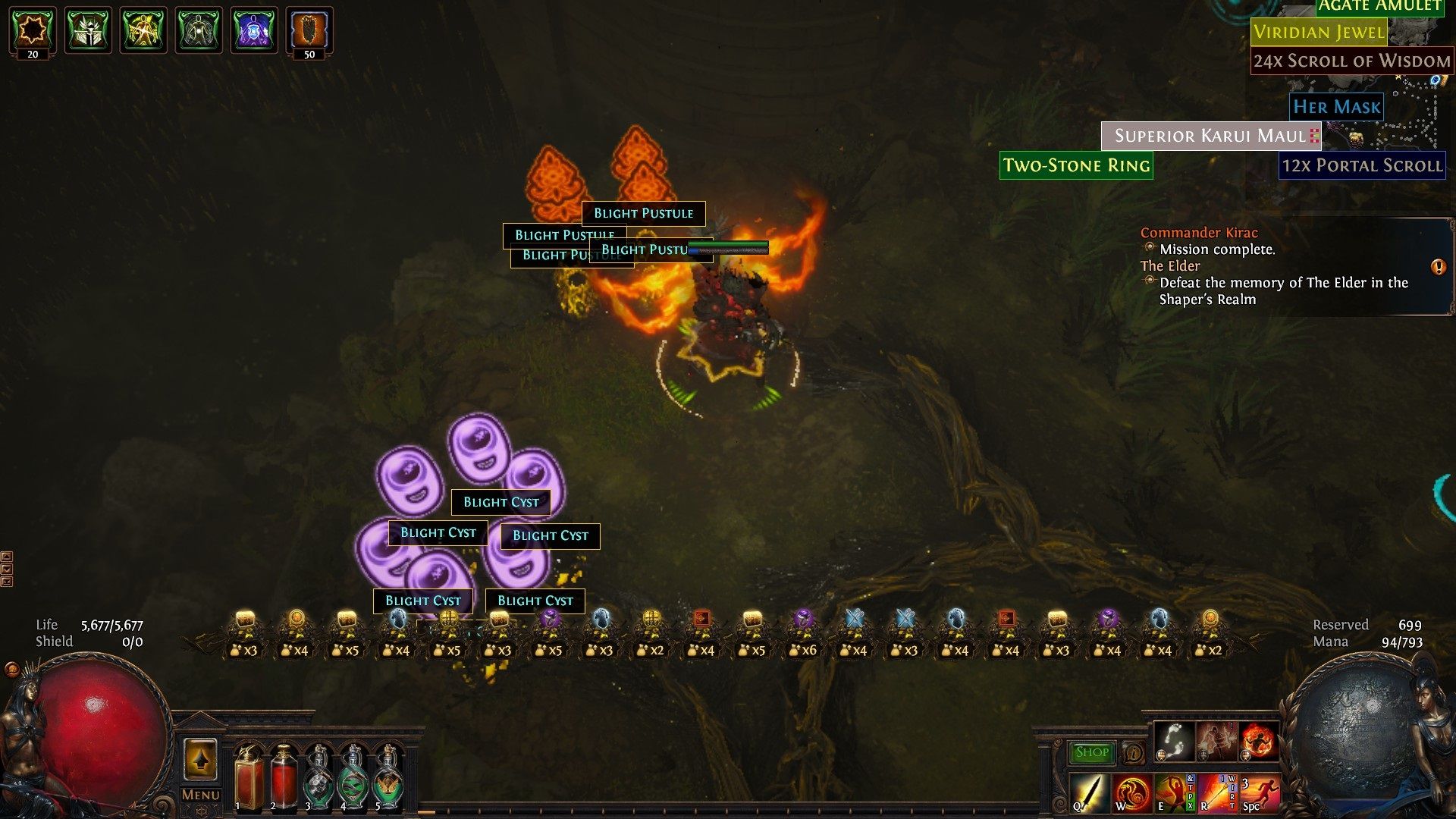 For the most part, I have not found the loot that exciting. This far into the league all but the highest tier oils are not worth much anymore. There are other things you can get like currencies, armor, weapon, and other types of chests. So far not much worth looting in the runs I did. It was nice to take a break from what I have been grinding and play around again with a league mechanic I usually skip over. If I get more missions with a blighted map option and nothing better I will more than likely take them. However, the smaller random encounter ones I run into I’ll be skipping over moving forward as my time spent does not seem worth it.