I was not expecting to be getting the kinds of kills I was on day 5. Between killing some bosses and seeing some nice loot from Archnemesis. It was another eventful day in Path of Exile. I was not expecting to be encountering anything for at least another day. That however is not how the day went. While many of the fights were lower-level ones. It was nice to get a little bit of time in with some of the new content. While also revisiting some old things as well.

While following the next in the storyline for Eater of Worlds I had a faceoff with his second in command The Infinite Hunger. Sounds like something I could be called. With a single death on my part, I was able to take him down without any further issues.

There was one strange part of the fight I still don’t understand. I was moved to an island and I took on stacks of a debuff. After lots of killing, I overtime died due to that debuff. Once I entered back into the fight I was back at fighting Infinite Hunger. I also had an encounter with The Black Star who appears to be in a Maven-like arena. She is on the Searing Exarch side of things. It did feel like a more crazy fight with how much AoE (area of effect) and other things were doing on. It was however at this level no challenge to me in defeating her.

After defeating these new bosses progress forward is just toggling their influence on the Atlas and completing further maps in different tiers as I get closer and closer to tier 16. I suspect at some point I’ll have to fight them again and perhaps then they will give me more of a challenge. At one point I had missions that had the Shaper Guardian Minotaur as the quest. The overall fight at tier 16 was a bit rougher than I was hoping. I knew I have some work to do still on my gear I was a little disappointed however with how long it took me to kill the guardian.

I’m also rather thankful that despite having Guardian’s Aid on my Atlas passive tree that at 33% life the guardian did not heal itself and have another guardian join. I’m not quite sure I’m there yet in terms of being able to handle two guardians at once. It would have defiantly been a bit of a challenge. 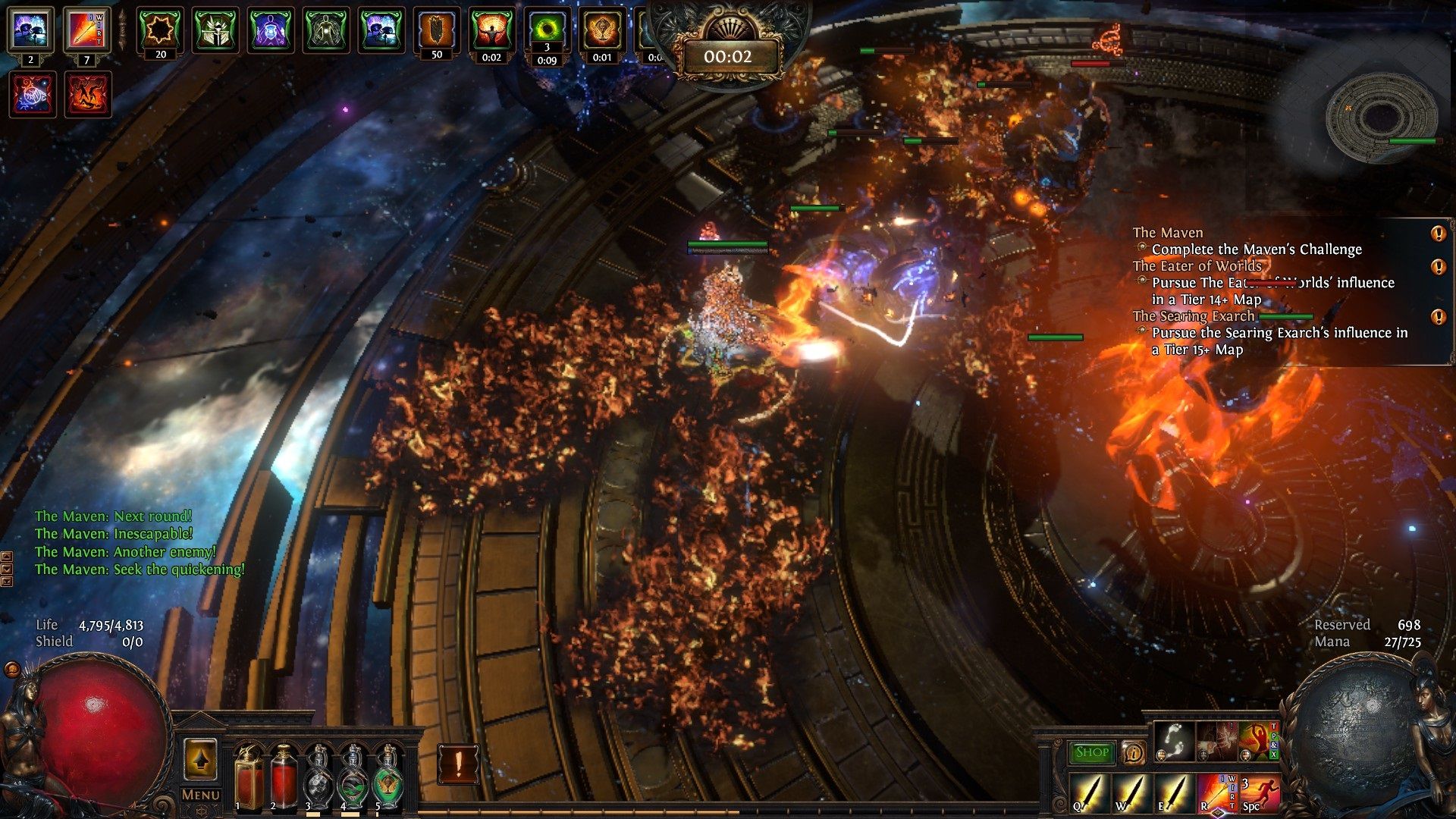 I had quite the fight with 10 tier 14+ map bosses in the Maven’s Crucible. I have also looted two more of the maven inventions for the Atlas to do it again. I got killed twice as I was fighting a few tier 16 bosses.

For a while, I was holding my killing the bosses as they were spawning in every so often. One of the bosses had quite a nasty AoE on it and I’m still lacking enough spell suppression on my gear to have fared better against such types of attacks. While those were all fun to encounter I was not expecting yet to be doing any of that. My main focus was completing more maps for Atlas passives. Progress started to slow down quite a lot when I was unable to get the tier 12 map I needed.

I needed the Wastelands map so I could progress my Maven storyline forward. I ended up taking one from Kirac mission that was not corrected so I did not even get an Atlas point from it. Maven also cannot witness mission boss fights. I was hoping it just makes it easier to get it to drop from running other maps.

Eventually, I ended up getting a Wastelands map. When I went to corrupt it so killing the boss would count for an Atlas passive it upgraded to a map one tier higher. I had already completed it and left me without even getting anything worthwhile out of that happening.

I got so desperate and annoyed of the map not dropping that I went into my stash map tab and started to vendor 3 for 1 map to one tier higher. At one point I had worked my way up to 4 Desert Spring maps and still at the vendor I could not get a combo for Wastelands.

After running quite a few more maps hoping for something I could use drop. I got enough of another tier 11 map that went I went to sell it to the vendor it offered me the Wastelands map I wanted. Thankfully this time around when I corrupted the map it stayed the same map. 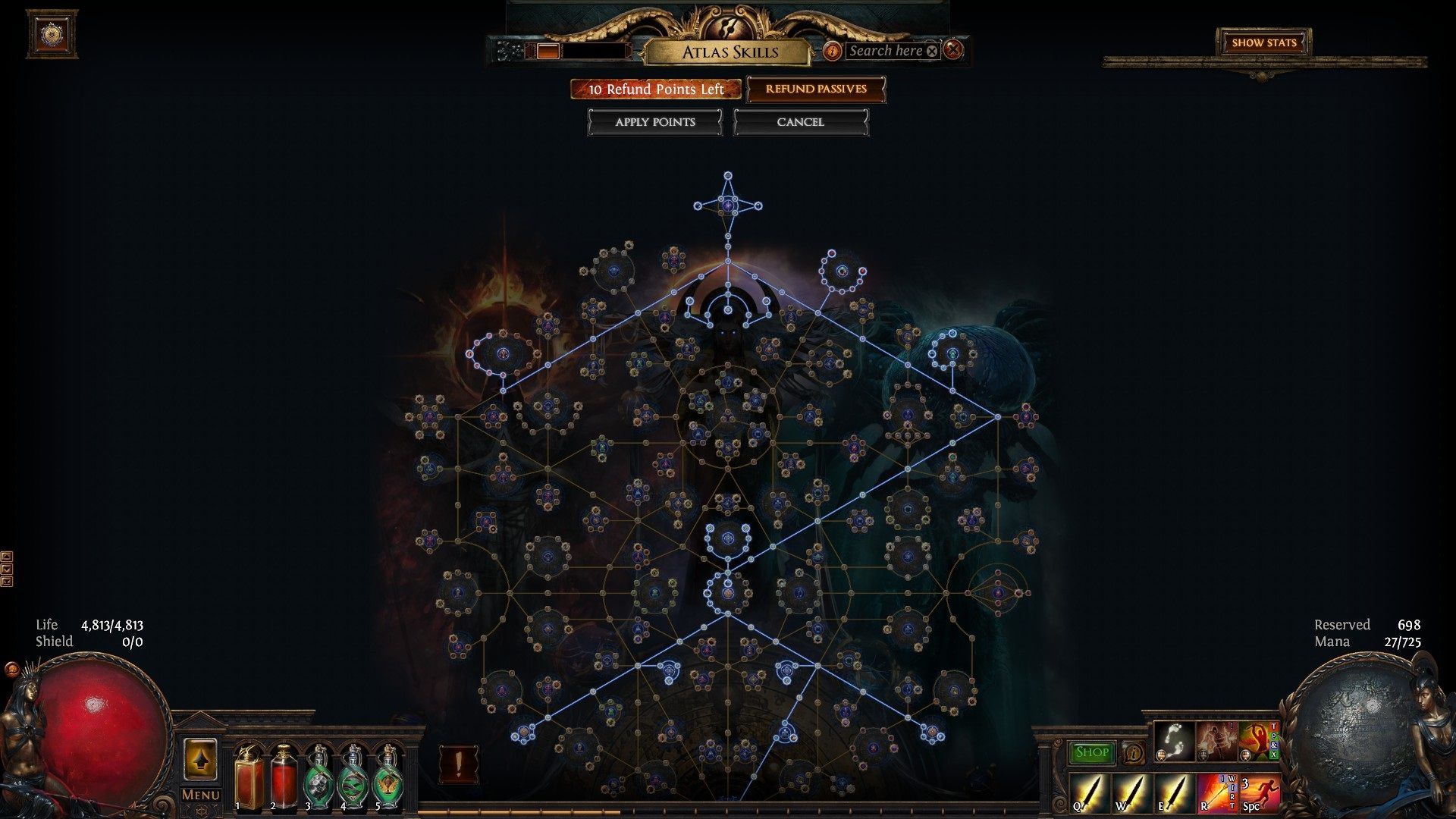 In total not including unique maps, I’m now only missing 6 red tiers and zero of the other tiers maps in terms of getting more Atlas passive points. I still have a lot of unique maps I need to get. At least I have picked up most of the bossing nodes I want and anything after getting one more will go into other things. I also spent a bit more time playing around with the league mechanic. I ended up finding out an interesting combo of tokens to use. It consists of combing lower tokens in the right order to get a tier 2 one to drop. They then get combined for some nice loot explosions.

It seems I’m not the only player running this combo. The scarab market seems to have taken quite the hit. You would think I’d be quite rich pulling as many polished and gilded scarabs as I have been getting.

Perhaps players have just not switched over their league farming characters yet from their starters. It can sometimes take the Path of Exile economy a little while before things are in full swing. As such I might be holding onto the scarabs as who knows I might end up needing them myself.

I even had an Exalt drop on my second cycle though using the combo. If that ends up being a common occurs I might just keep using Mirror Image, Treant Hoard, Assassin, and Rejuvenator combo. My only bottleneck at this time is getting lower-tier Echoist tokens to combine with Soul Conduit to make Mirror Image. It was quite a busy day and soon I’ll be focusing on slaying bosses and running some routes. I reached level 89 with 100 Atlas bonus objectives now finished. I may end up taking a day to focus on selling out my sales inventory and getting further gear upgrades so I can do so.