For several days now I’ve been ignoring running my Heist story mission contracts that have been piling up in my inventory. It was however time to reclaim that space back and pick up some phat stacks of Rogue’s Marker’s they tend to reward. Along with reducing my stockpile of contracts in general that I’ve been acquiring. 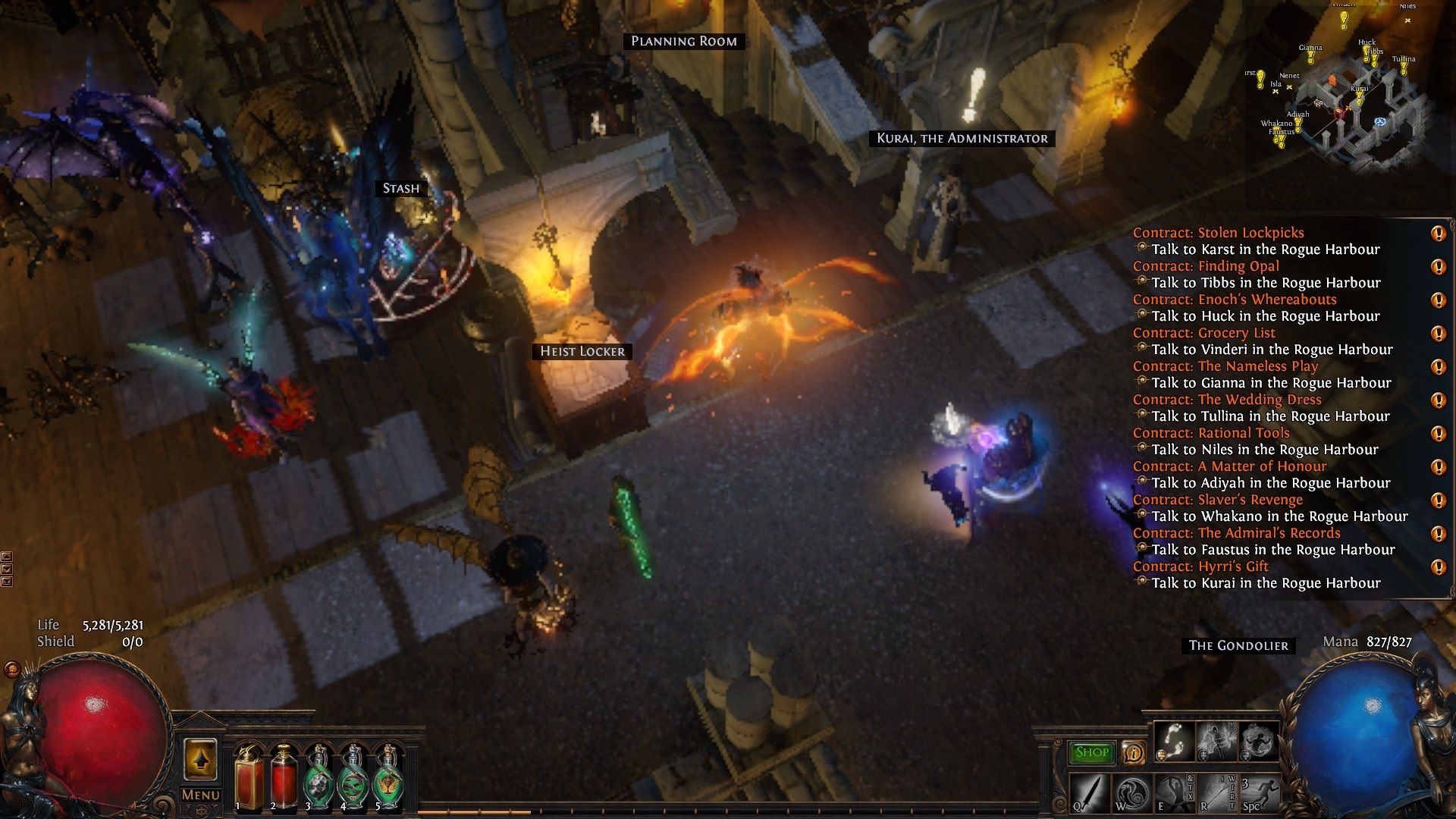 To say it felt like I was missed in the Rogue Harbour Heist area was an understatement. It was almost dizzying with how many storyline missions I had available. It looked like I had one mission for each of the NPCs in that zone.

There came a point where I was wondering if they would stop dropping as I kept running more and more maps on the Atlas. They filled the lower row of my inventory. Unlike other kinds of contracts, these mission types can’t be stored away in the heist locker.

While I had stopped buying lower-level ones off the vendor in Rogue Harbour. I had been looting a few from the Heist Atlas passives I have now been getting since I don’t want any more bossing-related nodes for the time being.

Between the contracts I was holding, and the ones in my Heist locker I had around 115 contracts to run. I’m not that fast of a runner so I only ended up doing 56 for the day. I will more than likely do my best to finish these off over the next day. 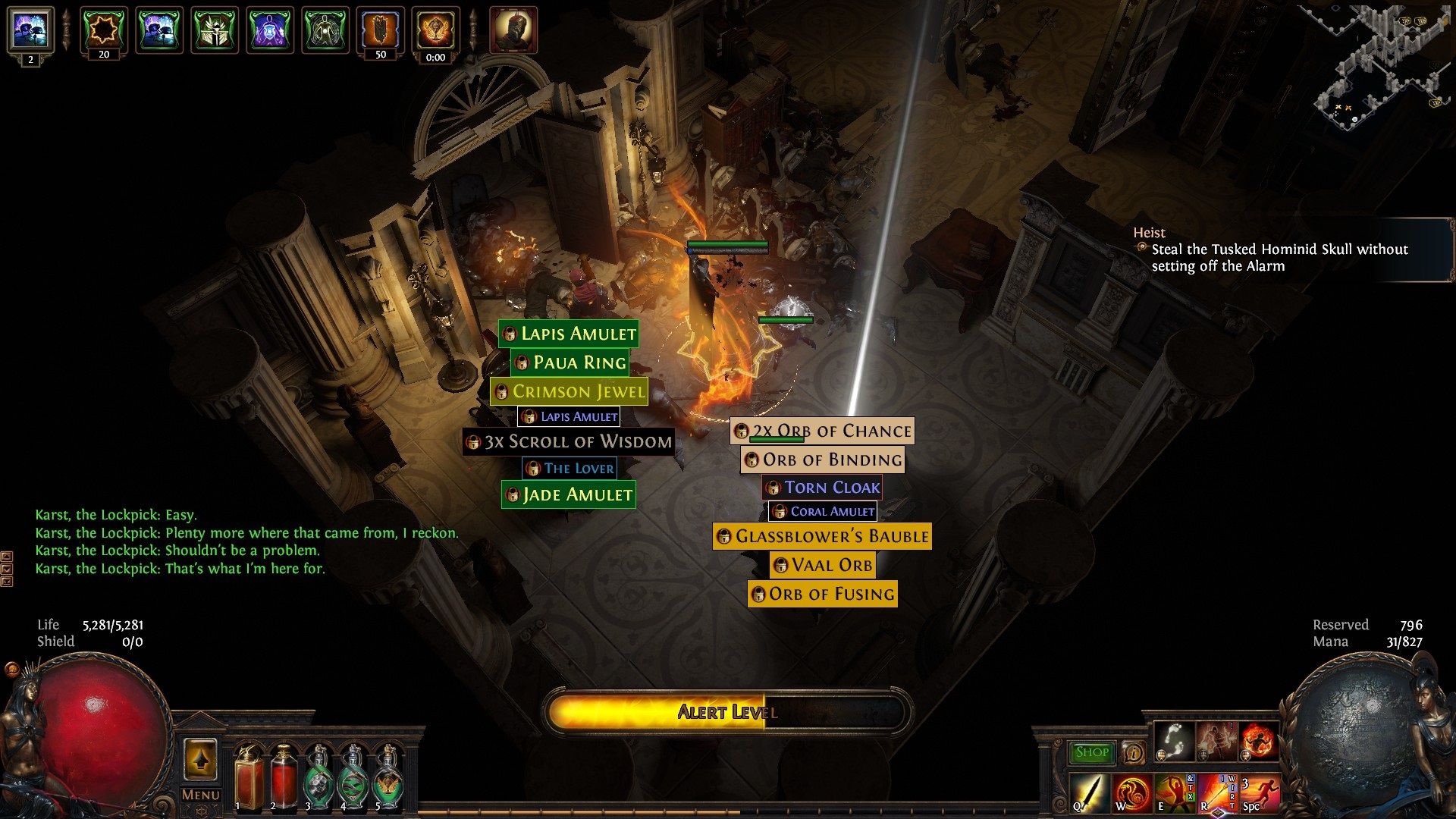 I’m somewhat glad I did not put much effort into focusing on these as a medium to the long-term farming area. You would think in 56 contracts I would have made some insane bank. Sadly, nothing of noteworthiness dropped.

There was a silver lining at least. I got some needed currencies to up craft the gear I’ve been getting. As this early in the league, I’ve been acquiring the gear I have been there leaving not a lot on the market and high competition for it. Being able to do some minor things saves a lot and opens up options in what you can get. 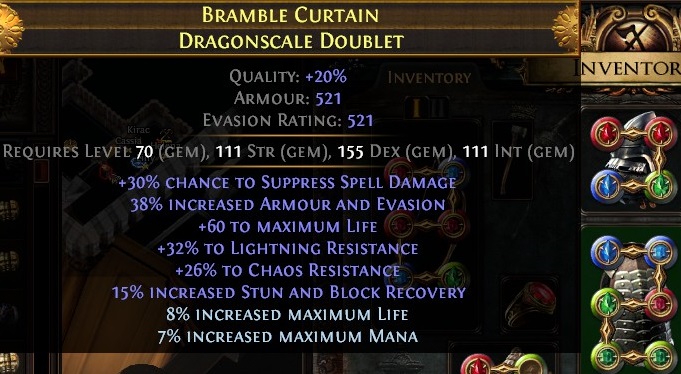 I bought a new chest for the day. At the time it had a different crafted mod onto it. It also had different socket colors than what I was looking for. It was almost an insane item from the suppressed spell damage percent to having chaos and lighting resistance. The life roll on it leaves something to be desired and I ended up paying the price I did for it and not something much higher. I also did not have any more Exalts at the time so I feel I lucked out on the price.

I invested around 50 chaos worth of currencies into it to make the chest fit my needs. The bulk of that cost was Chromatic Orbs in trying to color the sockets the color I needed. The majority of Chromatic Orbs I had have been from running Heists.

This saved me time as well. I knew I was going to search for a wide range of chests ignoring the socket colors as long as they were 6-link and not corrupted. I did not have to go out of my way to find a seller to buy the orbs from or spend time trying to upscale them into chaos either.

It was a nice byproduct of running so many Heists. I had also other currency I got like divine orbs that are used in crafting a modifier onto my helmet. While sure I could have run maps and then exchange loot I got into chaos and then into the currencies I needed for crafting. It’s rather nice when you can just do it yourself.

The majority of my Heist NPC crew are now at level 4 or maxed out at 5. Some contract types I know are not that great in loot I’ve been putting off on running till today. I’m at a point now where I’m starting to pay more attention to what kinds of crew member gear drops. Once I can get them all in level 5 stuff when they can wear it that will help a little.

I see Heist this league as more of a way to help break up and take a break from anything I’m doing relating to running maps on the Atlas. Path of Exile is a big enough game where it’s hard to try and find time to do everything. It is however nice to have a few things you could do if you are tired of grinding one thing out. The Heist takes for the day ended up filling just half a stash tab. Guess I was not that great of a thief for the day. Making me the king of the poor if nothing else. I do have some grand Heists to run once I get my crew NPCs more sorted out. I can only hope that I’ll be breaking in a fraction of the time the 2.5 Exalts worth of loot I got. 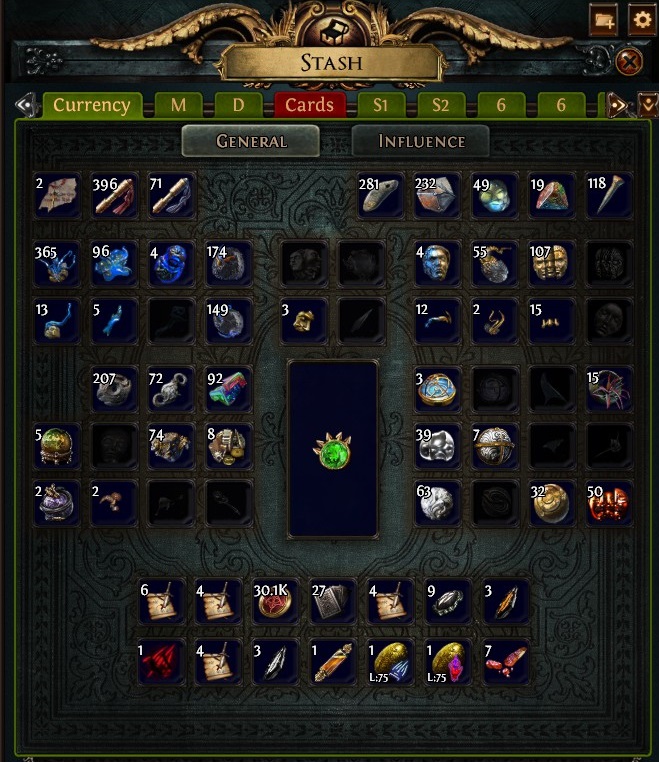 I was a little disappointed in not making more progress than I did for the day. I was involved in some other stuff and while Heists are not the quickest things to run or step out of if you need to quickly. They don’t take that long to run and it was nice to jump into the game every so often and run a few of them.

Hoping over the weekend I score some big items and can finish off some weaker parts of my gear. I still need a +1 to all skill amulet and my quiver is a lower level unique that I should be able to replace and get a little damage boost from doing so as well.