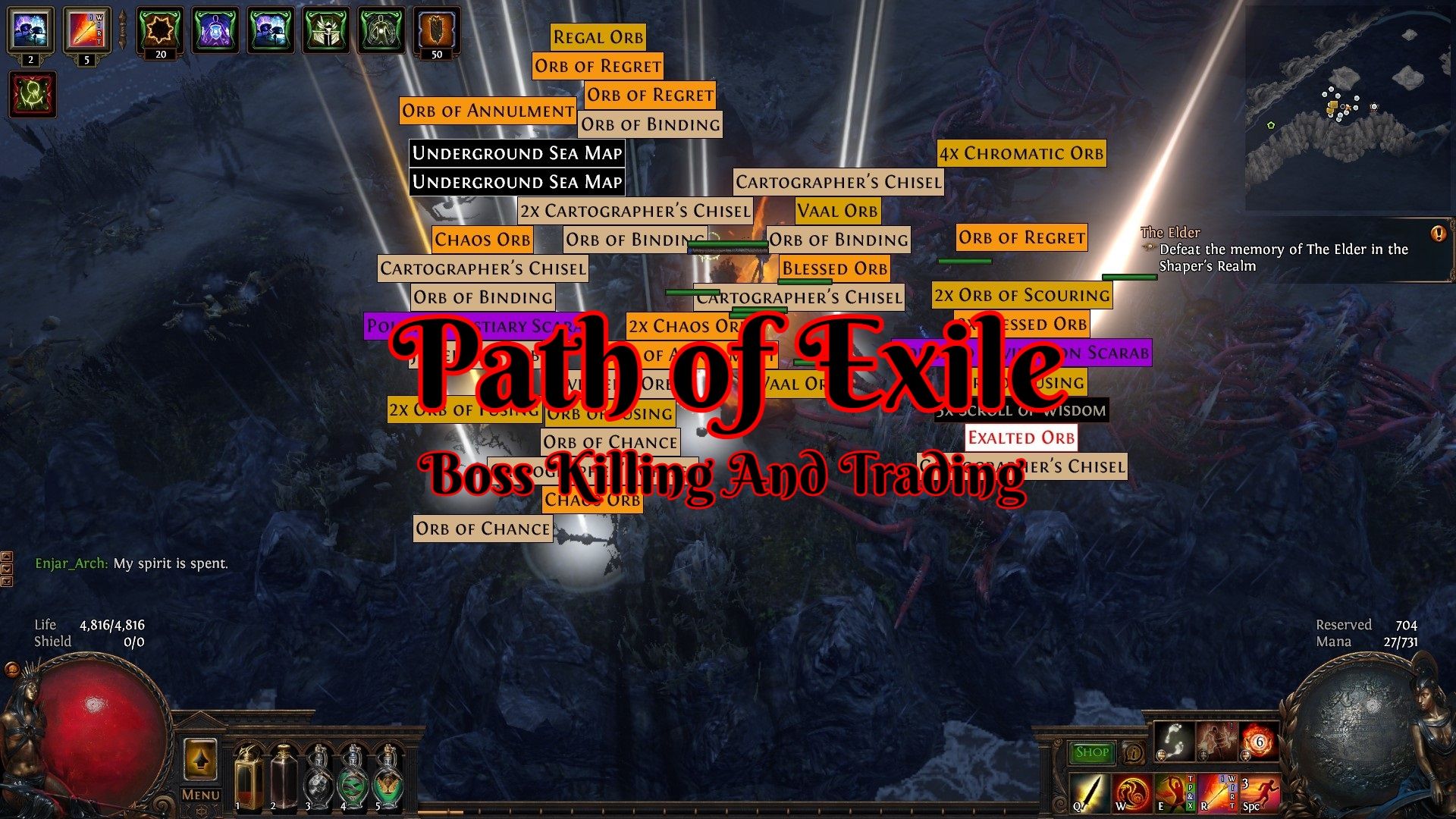 It’s not every day you get to kill two new bosses. I also worked on some things I need for crafting parts of my gear. Along with just having the game open and jumping in every time I got a message for a trade.

Searching Exarch and The Eater Of Worlds It was kind of the game to set you up on to see these bosses so easily. Once that is over however it looks like quite the grind to get them again. I have not played around much further with either of their objects toggled other than to get them both once.

I felt the two fights The Eater Of Worlds was at least for my build the easier of the two. His damage was a lot easier to tank or avoid when needed. While I did still get killed I never felt like I was in danger of running out of portals to finish him off. He ended up dropping some decent look for me as well. The onyx amulet I got was a Ashes of the Stars that I later sold for 1.1 Exalts. The price has dropped on the item quite a bit over time so I had to keep readjusting it. I’m just glad it sold in the end for something for my time spent.

I guess when everyone gets a more or less free chance once they finish the main mission and can run tier 16 maps. It’s not that shocking the prices are going to drop by a lot right away. I assume over time however with the extra effort it takes to get them that won’t be the case for long. As far as Searing Exarch I ended up failing the fight the first time around. There were a few more queues you had to pick up on to avoid getting one shot. Thankful after the first failure I only had to run one tier 16 map again to get another invention to try the fight again.

They also on purpose made the words that you need to do certain things on to avoid certain death similar to other words. if you are not paying close enough attention you could mistake different words. This is quite evil to do!

On top of that, the Maven has to help you out during the fight. There is a quite nasty phase where a wall of fireballs starts sweeping across the arena in multiple directions. The Maven will pop some of the fireballs creating gaps for you to try and get between.

More times than not I would use my flame dash to get over the fireballs. While one direct hit with a fireball will not kill my character. They move so fast and in a way once you get hit once you are hard-pressed to recover quick enough before getting hit again if you are unable to get out of the way.

The loot I was less impressed with. I got a shield selling for 1 chaos and another drop I sold later on for 10 chaos. I’m sure there are some amazing drops in the loot table. I just did not get to see any of them this time around.

As far as running either of these bosses again the Atlas shows my progress at 0 of 28 for tier 14+ maps that I’ve run with their influence on. Since you have to pick between having Maven, Eater of Worlds or Searing Exarch toggled for the requirements to get their inventions to the boss fights. Making them quite a grind to get again forcing you to choose one over the other. For now, I’ll go with Maven to get an invitation out for that fight.

I now have two Voidstones with each one increasing the lower tier maps making more of tier 16. Once I have all of them I can run any map I want and its progress will count toward whatever invention I’m trying to farm for at the time. 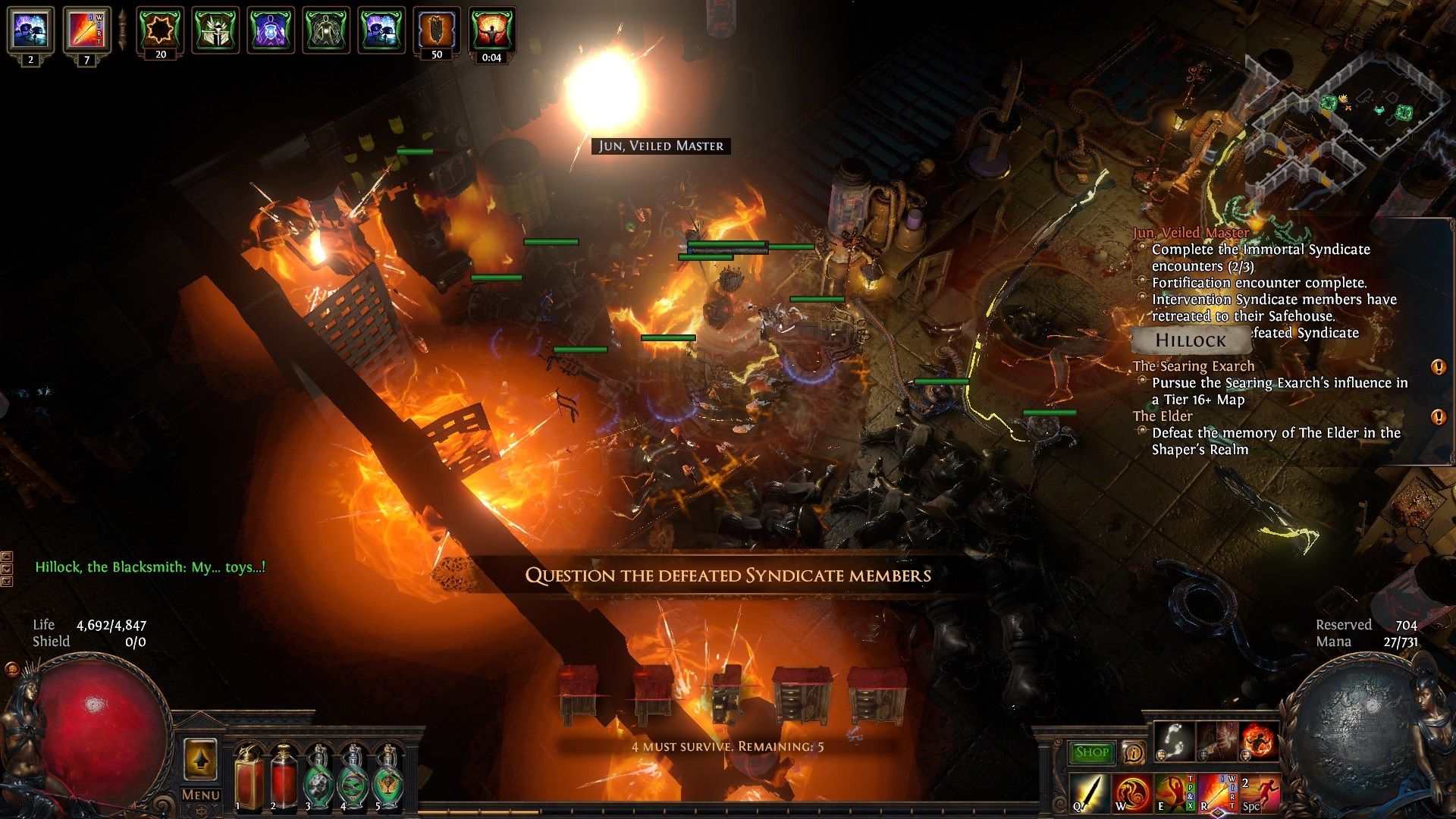 One of the things I needed to work on was unlocking some veil modifiers on the crafting bench. That way I can craft some needed modifiers on my gear which will open up more options in buying something that I then can finish myself. While also saving me some currency in the process.

To do this I need to farm the Immortal Syndicate. Once you defeat them there is a chance they drop an item with un-veiled modifiers on those items. You then veil them yourself and you unlock that modifier to craft with. I had a bunch of Atlas missions for the Syndicate that I had been stockpiling for when I wanted to do this. I ran around 12 white tier maps in total getting a large number of modifiers. One of them I was however not having any luck on getting.

The other way to get them is to buy unveiled items on the player market. You however need to work out which base types will the modifier you can choose from the options when you go to veil the item.

I ended up spending 4 chaos on a gamble that the one I needed was going to be on a certain helm. I ended up being correct and was happy I did not need to sink a bunch of chaos into this trying to work out what is what since I could not find much information online.

Trading And Other Stuff While it’s a bad habit I had several growing tabs that had become a dumping ground for stuff I would price check later. It’s not a good idea this early on to let things linger for too long so it was time I went through everything and listed a lot of stuff to sell.

Trading in Path of Exile has always been more akin to the old style of doing so. We at least have a website for items to be listed on. It’s however not an auction house and you need to contact the seller and arrange for an in-game trade in their hideout.

As expected a lot of stuff I had in stash tabs ended up being junk or not high enough of a price that it was worth my time in trying to sell. If I have to stop every few moments and portal out of a map or whatever I’m involved in for a small 1 chaos or smaller trade I just don’t see it worthwhile most of the time.

I also had a few currencies I needed to upscale into chaos and exalts. Some times of the day it seems like every person you contact has an open slot in their group and is ready to trade. Other times you can contact 20 different people and not get a single trade out of the time spent.

I also used this time to run a random map or two when I could. Along with some more Archnemesis league testing around and farming. Which lead to another Exalt dropping which was featured in the cover image for this post.

It was a decent little day with a lot of trades being made in the end. Hopefully, soon I’ll be gutting a lot of the lower valued stuff out of my sale tabs and replacing them with some fancy and expensive things. I still feel I’m a tad weak for farming bosses the way I want. So I’m still working out some things and finding ways I can improve my damage. 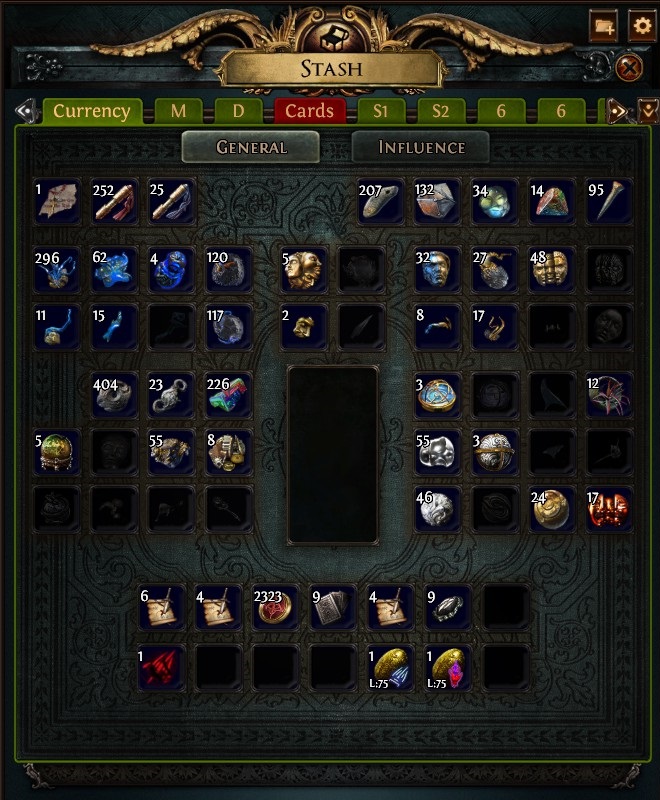 I ended the day at level 90 with 102 Atlas bonus objectives finished. I also unlocked two Voidstones from killing two of the new bosses. Finally, I have several Exalts now to keep an eye out for some needed gear upgrades.