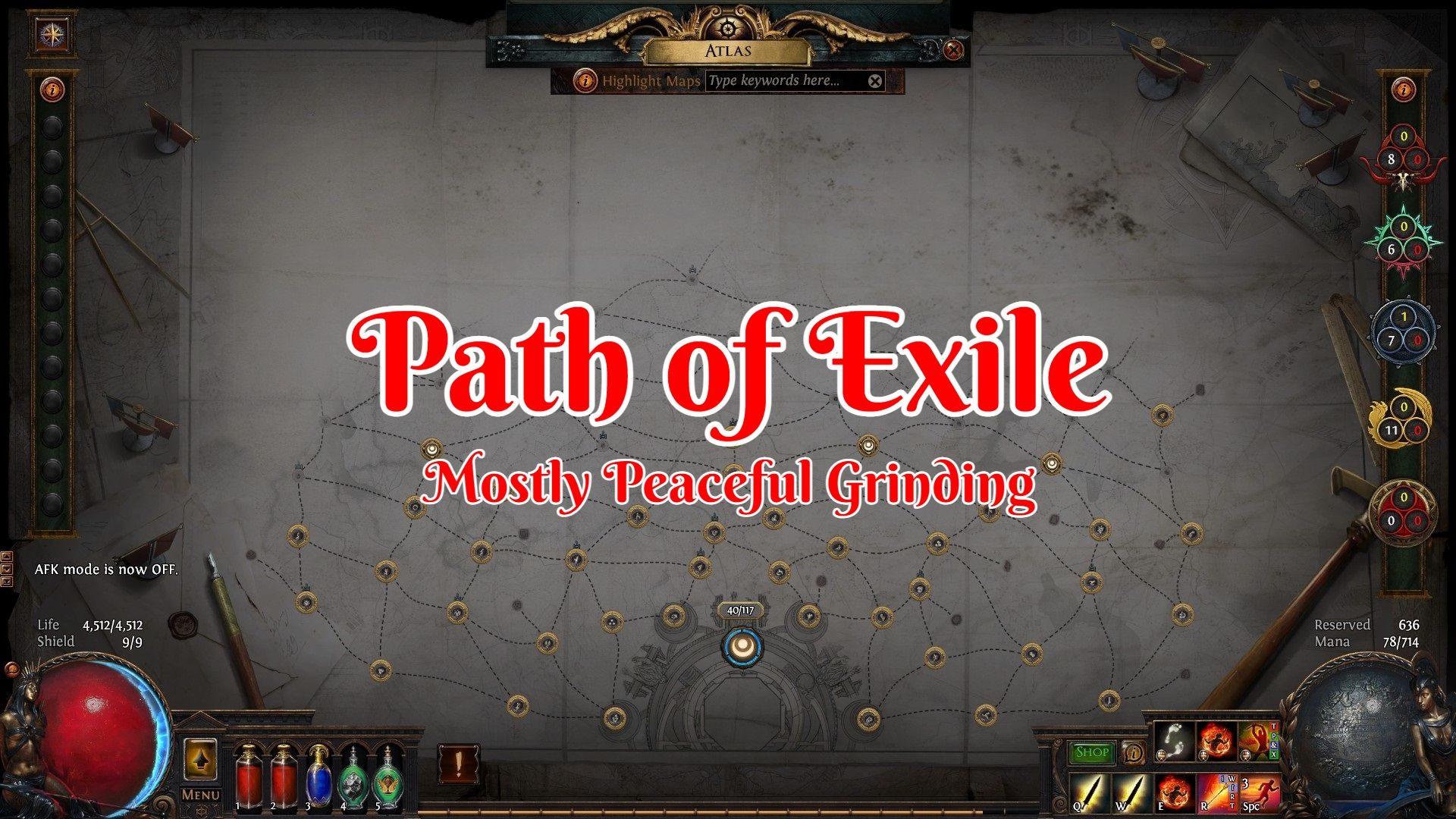 It was a mostly peaceful day in Path of Exile outside of six totems firing explosives arrows blowing things up into small bite-size pieces. I ran a few more Heists to lock in some more currency before I made a switch over to mapping. I spent the rest of the day unlocking more Atlas passives and taking care of a few other things. 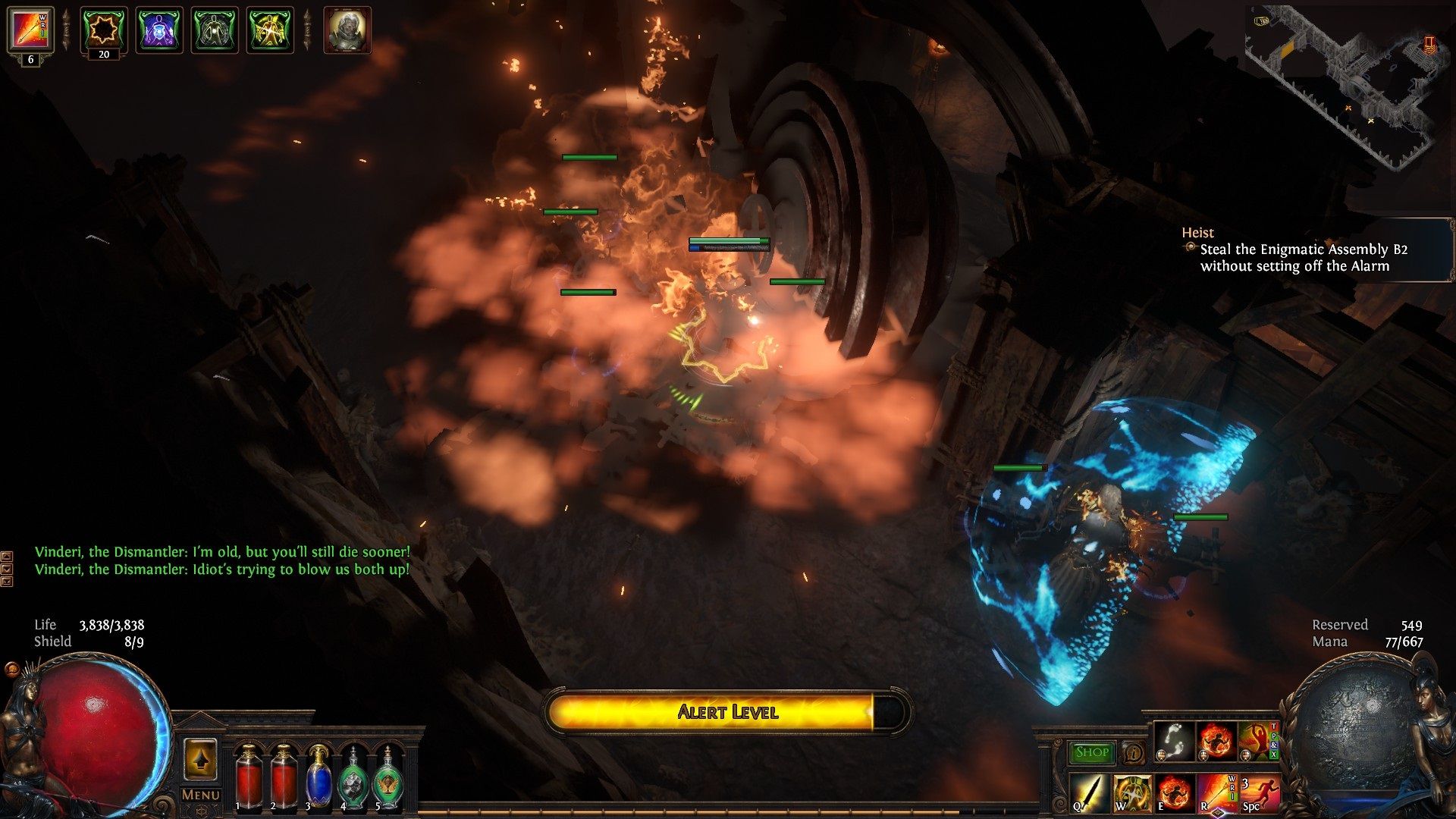 I lost count of how many I had run for the day. Between buying up a bunch more from the vendor and looting quite a few from mapping the rest of the day. I think I did less than two dozen as I did not spend that much time on them.

There came a point when I felt I had enough currency to start buying up some needed upgrades. I was also closing in on having enough to buy a bigger ticket item for my build if I was quick enough against the onslaught of other players looking to pounce on the same gear.

Nothing major dropped other than I noticed an increase in Stacked Decks dropping which I’m still waiting on to sell. I brought in around 1 Ex (exalt orb) worth of currency and other items. I say about as the price for an Ex increased from around 80 to 103 chaos or so.

Since I had the crazy goal of trying to reach red maps by day four it was time to get out of Heisting for now. I have plans to return later in the week and run a bunch of the higher-level ones, special contracts, and some grand heists that I looted from the day. I had quite a few goals for the day. I wanted to play around a little more with the league mechanics. I wanted to learn more about Kirac missions and any way I could use them to my advantage. I also wanted to finish off white tier maps and be ready for yellow. I played around a little bit with Archnemesis again. I wanted to see what kind of recipes I could learn about by myself that might aid me in my goal of reaching higher tier maps quicker.

I did end up using an interesting combo when I had the tokens. I would run a gargantuan, a soul conduit, a necromancer (rerolls for higher possible rewards), and whatever filler I had. I would sometimes luck out and get a couple of map drops other times I would just get mapping items like chisels.

Necromancer itself requires you to put in the correct recipe to get one as a reward. I’m sure there is a far more interesting combination to use it in for a better result. This is just what my needs were at the time.

Overall I mostly skipped running Archnemesis unless I had some tokens I wanted to use. The main focus for the day was getting maps completed for the Atlas bonus. I did not feel much of a rush to try and get more done than that. 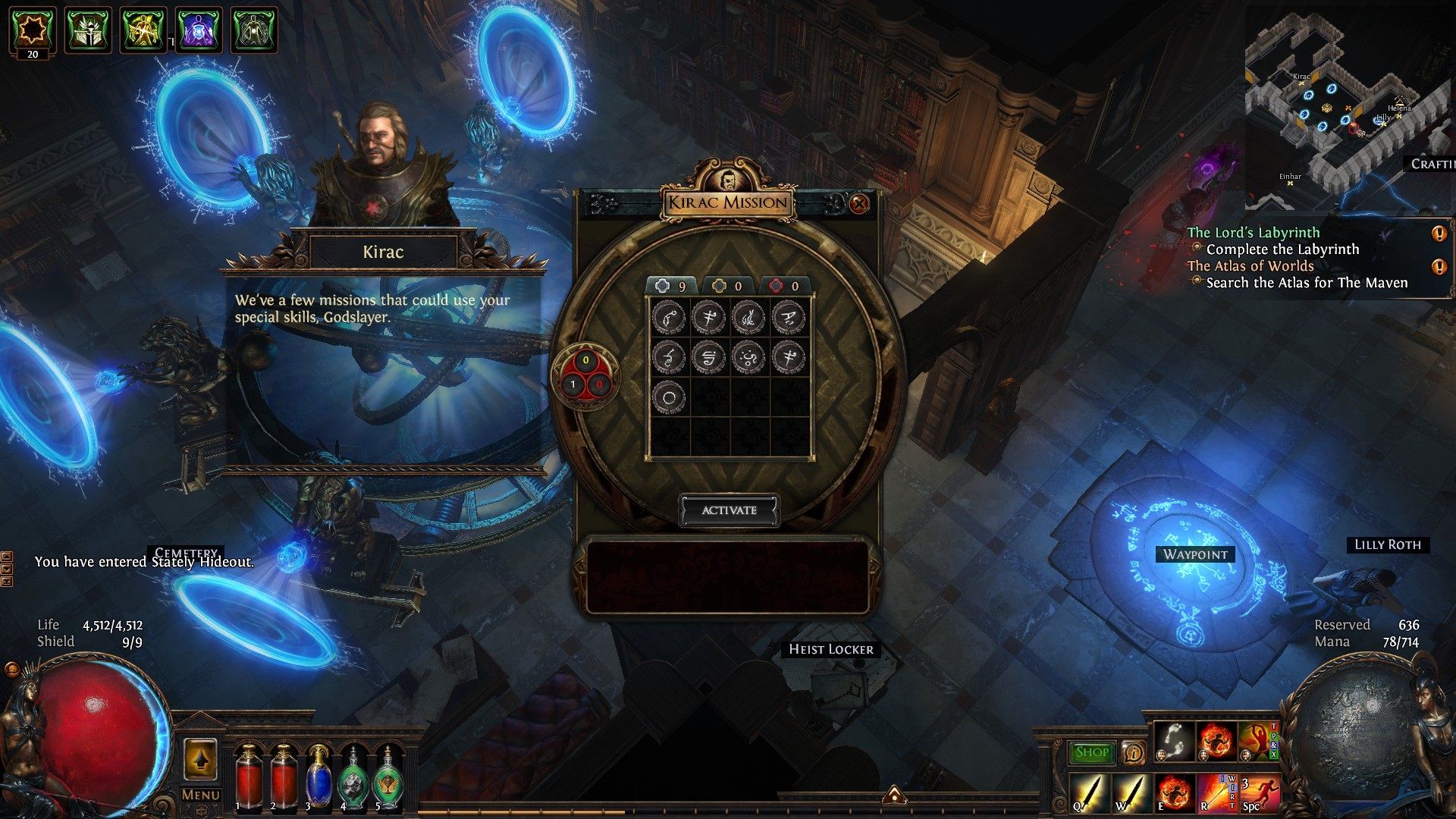 The most important thing for the day was working out how to use Kirac and his missions to my advantage. After getting a couple of Atlas passive points into “chance grant an additional kirac mission on completion” I started getting one every few maps runs.

This became quite important in making progress on the Atlas. Kirac missions are all maps and you get to pick one to run each time you get a mission. Some times you get maps that you have not done that meet the bonus objective requirements for an Atlas passive as well. For the lower-level maps, this is more or less guaranteed for killing the boss. Later on, it will not always be.

While I have not always gotten a choice of maps where there was one I had yet to run. There is a low chance to get scouting reports to drop that allows you to do things like reset if he has any missions including an uncompleted map if possible or having one of them being a unique map. I suspect there are other kinds of reports I have just not gotten them yet. The huge thing however is when you complete the mission he gives you for that map. Since most times they are easy to stuff like kill a rouge or something along those lines. His inventory resets. If you did not know he sells maps. Giving you a decent chance to get some maps and maybe find one you have not run yet.

The first couple of times I was buying out his inventory in full. I quickly burned through the 80 or so chance orbs I had. I decided since I was going to get around 8 or so resets for the day from how many maps I was planning to run. That I would just buy what I was missing or could use to hope for the drop I needed.

Despite having this new way of trying to cycle through getting maps I had yet to run for the Atlas passive skills. It still took me longer than I was hoping to finish off all white tier maps. I’m still missing one tier 5 one but oddly enough I have one of each for tier 6 when I run them.

Kirac has created this interesting situation for me where I’m starting to acquire tier 9 maps and yet I don’t have their lower counterparts yet. I don’t want to run them yet since they are not connected to a lower-tier map. It has caused me to rethink some of what I was planning to do in this league.

I ended up making quite a huge change to my Atlas passive tree plans. Before I was planning to take a few Delve notes. For now, I have removed them from my plans.

While I love running the mine in Delve I’m just not seeing enough value there for me at the lower end. Archnemesis league is making it easy to farm a lot of fossils possibly even faster than some instances you could in Delve. Meanwhile, Kirac is more or less if you have some points invested into him on the Atlas tree ensuring map sustain.

I can’t sell the fossils I have so far or at the price I want. The other big money factor for me would have been mapped but at the lower levels, Kirac is killing that as well. I would need to invest quite heavily into Delve I feel before I got deep enough to counter the effects league and Kirac are having.

It’s not all bad news, however. Since my character is set up to be a boss killer Delve was not my end goal for farming currency and items. Thankfully I’ve done well enough in Heist this league to make up for it.

I instead have put a focus on getting all nodes that involve Kirac for the time being. Since they are not that costly to reset and I’m trying to get a few of them a day mi might as well take advantage of things while I can. I also got my first Ex drop for the league! This ended up coming in handy later on.

Outside of just missing one white tier map, I’m now entering into yellows. I already have a few ready to run once I get up to them. Clearing a single red map on day four is looking more and more possible. I just need to take some time to do it. I’ve been a crazy person running around with some gear that I looted at level 30 or so. Now that I’ve reached level 84 today it was time to address that. I don’t usually be this lazy (most of the time) in the upgrades department they were just not needed. At least the one or two pieces I upgraded since level 30 helped keep things together this long.

To say it was starting to be a bit painful running around with four-linked sockets for my main skill at best is an understating. However, my character would rarely get killed and outside of two encounters, I was murdering everything in sight. That was till day 3 came rolling around.

The biggest thing I needed was going to be a six-link bow. I’ve seen a couple exactly or close to what I needed. They however were being listed for 10 to 12 Ex which is quite out of my price range. I however put it for an alert on the trade site so I could get alerted when they came onto the market so I could keep an eye on things.

I noticed one bow pop up and was not listed for a price. The bow was then listed a few moments later for something like 10 Exalt like the others I had seen. Maybe 5 or so minutes later it popped up again at a reduced price.

Not long after it showed up again even a little cheaper. At the time I had a feeling the seller was looking to move it quickly or just find the sweet spot in the market. If I recall I remember seeing this person from the last league so they could be a crafter I’m not quite sure.

I had 6 Ex at the time and started to upscale what currency just in case it got relisted at a cheaper price I might be able to scrape enough together. Sure enough, a short time later it got listed for 7 Ex. I was still a bit short. I however kept trying to find some deals. I knew for sure if it went any cheaper it be instantly gone.

In the past, I would take the time to exchange 1 Ex worth of chaos into an actual Ex. This time around I did not want to be 30 secs too late to the trade. I for sure thought the bow would have been long gone after 10 or 15 mins of me trying to find enough spare change to come up with the reminder.

It was still for sale. I dumped all the chaos and Ex I had into the trade window. While I was not expecting someone to turn down a trade I would have understood at the time it was 6 Ex and 103 Chaos (1 ex worth) and not the exact 7 Ex but worth that much the person asking for. Thankfully the person accepted the trade and I now have my possible end-game bow. While it is a short bow and maybe a thicket would be a bit better it’s close enough. I needed more sockets for my mains skill and my chest was set up for a different six-link setup. There is just one thing I need to do with it once I have the required resource otherwise it’s good to go.

That one Ex I looted earlier in the day sure came in handy. While I upgrade my chest, boots, and gloves most of them were 20 chaos or under purchases. While they are not perfect they are much better than what I had and should get me through a lot of content for the time being. 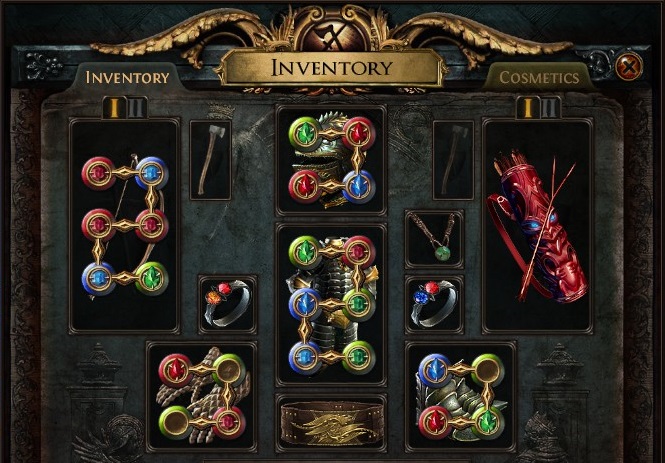 While there is a lot of room for improvement I at least now have 2 six-link pieces of gear. I’ve capped resistance and thankfully I have some movement speed on my boots. The quiver and jewelry still need some upgrading before I focus on replacing the other gear slots again. Leaving the day mostly broke but in a much better position than I was. I’m so glad I got all those Ex while I did before markets reacted to inflation. I have quite a lot of unfinished things I’ll need to get around to in day four.