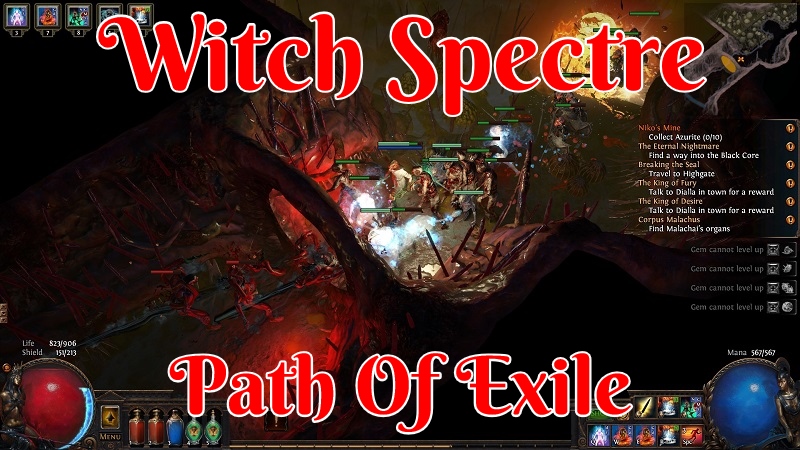 Sometimes it’s just nice to make an alt in a game and take a break from what is going on with the main. This also creates a chance to have some fun and spend some of my hard earned loot. While I could go without tricking out my alt out in all kinds of nice gear. That is part of the fun of this game when you want to level up something and it’s not from scratch. 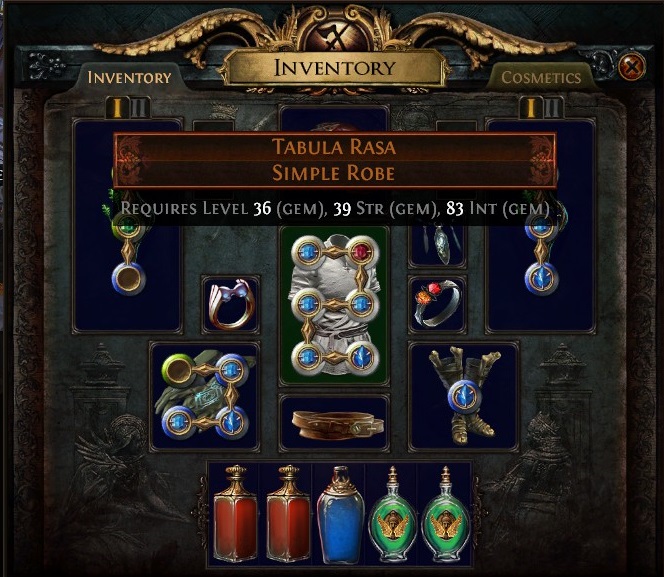 There are quite a few different things you can get for leveling gear. I’m just going go over some of the basics I ended up picking up for my Witch that is going be focusing on summing in the short term zombies, skeletons, and spectre.

The most expensive gear was a Tabula Rasa. While I was expecting it to be priced at around 10 Chaos it was in fact still at 18. Lucky for me I had 5 of the 9 cards you needed to turn in for one called Humility. So I just went out and bought up the remaining for I need off other players for 2 Chaos each and turn in for the item.

What makes this nice to have is you can wear it as soon as you get to your stash in act one. It has 6 linked sockets and they are all white so you can put any color gem you want in it. The biggest issue then you run into is not having enough gems to put into it at early stages of the game and running out of mana for how powerful and costly spells you are casting. If it was not for this item you could not be having a 6-link skill to use in the first place.

Next up was a Goldrim helm this is wonderful early game as it has +32 to all elemental resistance. While the stats are not that best you are set for a few Acts in this game with that much resistance coming from a single item. I managed to pick up one for 1 Chaos. 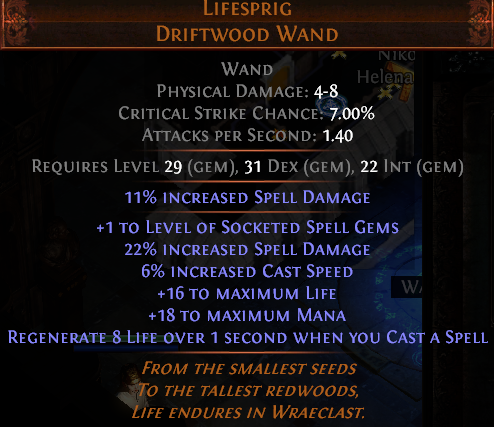 Next up I had two Lifesprig wands they as well could be used as soon as I got to my stats in act one. As you can see from the screenshot they have some decent spell damage and cast speed for that low of an item. The real key is the +1 to socket gems. That right away makes you a killing machine for a number of levels. It can also have 3 sockets which are great for a while as well. I picked these up one for 1 Chaos and the other for 2 Chaos. Many had it listed for sale but it took a while for finding someone wanting to make the trade. Sometimes people just don’t want to stop what they are doing for so little money.

For my gloves, I already had a Doedre’s Tenure in my bank that gives you 50% spell damage but with reduced cast speed. A fair trade off even more so since I already owned a pair. It was a level 12 item but it can be made into a 4-link item. It did not take to long to get to that level. At some point, I’ll replace it for something with life and resistance on it. When my minions are doing more damage than anything I’m casting will. 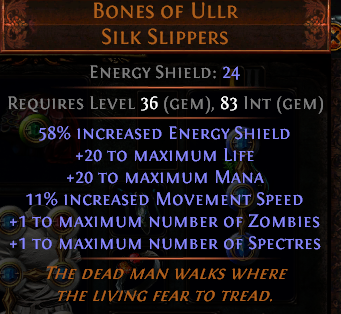 I had two different kinds of boots ready to go. For at level 1 I had a Wanderlust they carry a 20% increase in speed and a high mana regeneration bonus. Great for that first couple of levels where your mana flask is not keeping up and you need all you can get. The second pair of boots was a Bones of Ullr that grants +1 to a number of zombies and spectres. While zombies, later on, are not that great that extra Spectres is the whole point in getting the item. Together they were 2 Chaos total. 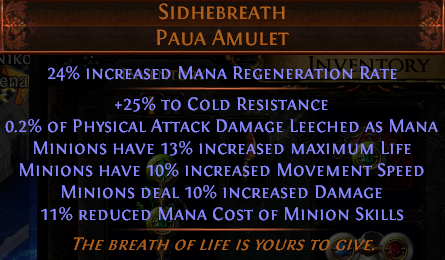 As far as my belt, rings, and amulet I just tossed on whatever I had. I already had a Sidhebreath amulet that is great for minions. I also have a bank full of amulets and rings I’ll just keep upgrading to the better ones as I get high enough levels to wear something better. 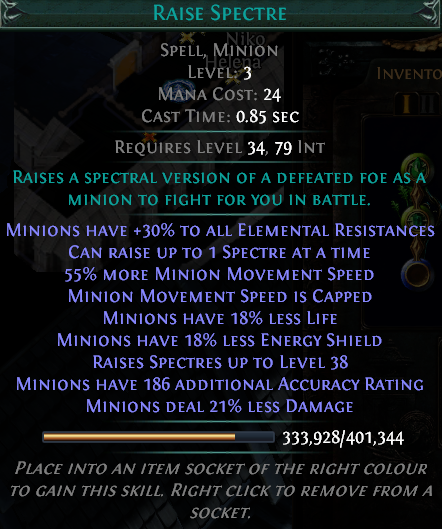 Often times the skills you are going end within this game are not what you start with. While I am high enough level now to use Spectre skill they are rather weak till I get more passive points and other items behind them. So I focused elsewhere first.

The game starts off Witches with the Fireball. I killed a total of 2 monsters to make it to the first town and sold it right afterward. I picked up Explosive Trap and added on Multiple Trap. While I could put in further support skills at this point it’s no longer doing the bulk of the damage. I’m also not picking up any passive skill points to make it great either. As such I just left it like that my minions seem to take where I am doing damage as the direction where to attack.

Not too far into the game, I unlocked the ability to use Zombies. The great thing about these guys is once you summon them they stay around till they die. They do require a corpse to be summoned in the first place and overall they are not that great towards mid to end game play. At some point, I might choose to no longer use them at all.

After that, I picked up Skeletons and that is what I have sitting in my 6-link chest for now. The biggest downside to these guys is only lasting twenty seconds. Over time I added on Melee Physical support, Minion Damage and just some random whatever I could pick up at the time skills. At some point, I’ll be replacing Skeletons with my Spectre as my main skill. I will keep them around in a 4-link item later on. As they will be great for targeting down bosses and any other high life targets.

For now, my Spectre is just sitting in a 3-link configuration with Minion Damage and Elemental Focus. These guys are summoned from corpses and become what they were summoned from. As such, I’ll replace the Elemental Focus with Melee Physical when they become melee if I don’t forget. They tend to die a lot for now. My rule is whatever killed you now becomes the new Spectre! Later on, in the game, I’ll target having a certain type from a map over others. The downside to these is if they die you won’t have access to finish your map or boss kill with your best. You will just have whatever you could find in that single zone you are in.

For movement speed, for now, I’m using Flame Dash. I’ll move over to Shield Charge at some point. That will require changing and upgrading some gear. I’ll be losing some damage for a more consistence movement skill and adding in some defensive ability with it as well.

Since most of my damage is coming from minions anything else I can add that applies to them just make sense. While this could depend on the type of Spectres I end up getting as I’m not quite sure how much of a role that will play and if they are going be melee or spell damage. Something like Anger that will give them fire damage could be decent. Maybe I’ll add in a curse as well to help damage long such as Elemental Weakness. There also always Haste and many other choices. 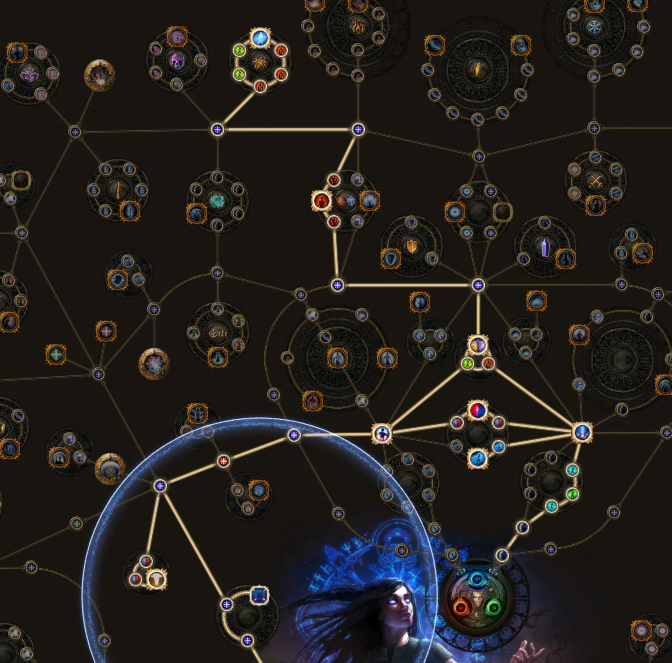 For now, I’ve set my eyes on getting +1 to my summons and gaining life. Along with picking up any needed stats to keep upgrading my gems when I can.

My first stop was to the upper right to picked up a skill called Death Attunement along with all the minion nodes to gain them more life and damage,

My next stop after a couple of quick passives on the way is Grave Impact. That gives a nice boost in damage and an extra zombie and skeleton as well. Great for the level I’m at. 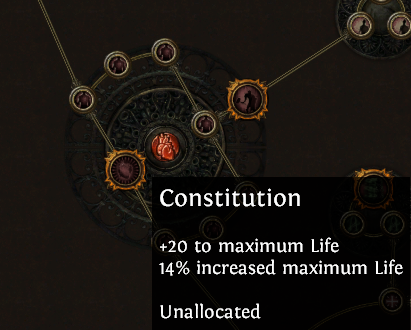 After that, I’m going be going down for the massive amount of life passives around Constitution. All those nodes will add a nice chunk to my life and keep me from falling over every time the wind shifts a different direction. While I won’t be a very tank Witch they rarely are.
Once all that is done I’ll be taking a look around for sockets to put gems that add damage and survivability to my minions. Any other minion nodes that are not too far away or that I feel are worth traveling towards. Along with anything I need for myself like stats, life, or resistance.

My Labyrinth goals I’m going turn this guy into a Necromancer. For at least the first two I am going aim for getting Soul Weaver which will add 100% life and damage to my spectres and they finally should be good enough to use as my main minions. Along the way to that passive, I will end up passing though Invoker which will add 20% max life and damage along with some other stuff as well. Then you just have the two minor nodes you pick up in that path. Beyond that, I’ll have to see what I feel like getting. 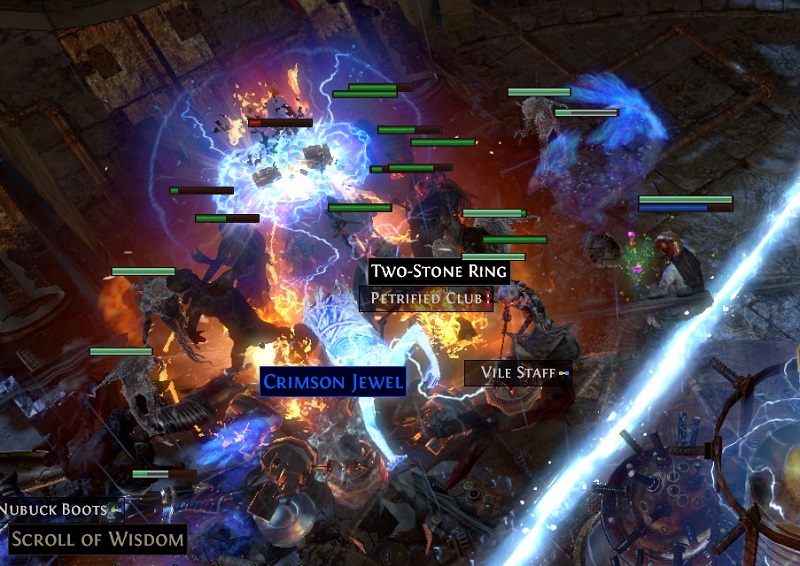 I’ve been having a blast playing this summoner so far. I’ve yet to see it’s full potential from the spectres since they die all the time and I have yet to focus on finding anything but whatever killed it to replace them. I’ve been passing less than 1 hour per act, not including breaks or going off to trade. Even with all that added in, I’m still under that mark. So a new personal best for myself I believe.

Everything has just been falling over dead. In most builds, I play they have great cleaning but poor boss killing. So far any act bosses or monsters with a fair amount of life have died in less than 30 seconds. Which has been amazing to see and something I need for later parts in the game if I can keep anything close to that up. Looking forward to seeing where this summoner goes.