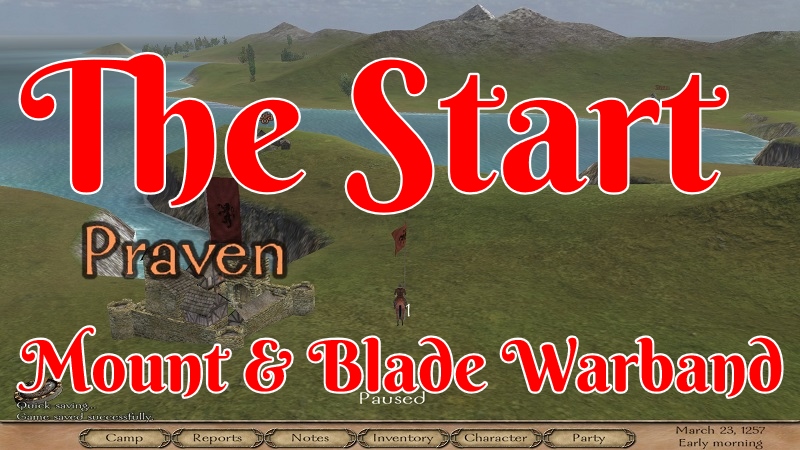 With Bannerlord taking forever and a day now. I’ve been in the mood for a while to go pillaging and conquer a map. It has been a while since I have played Warband. I even have the Viking Conquest DLC but I never got around to playing it. Since the game does take a little bit of getting used to again I thought I would play a normal one before going off and enjoying the DLC. The game is a bit dated these days but still fun to play. 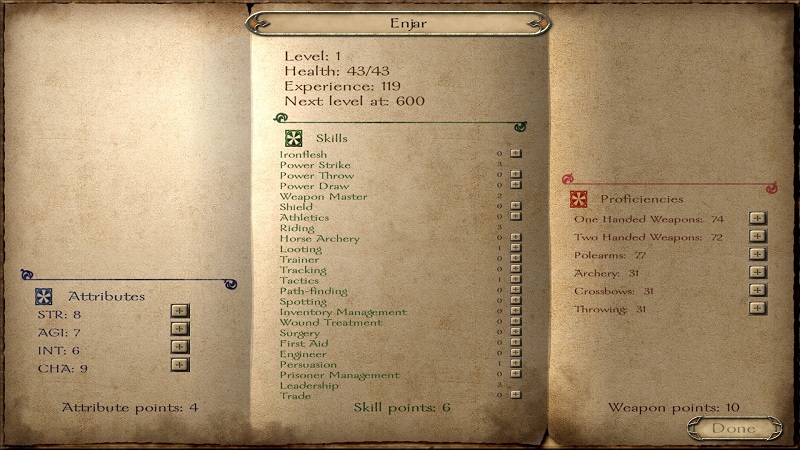 I’m going with rather easy choices to make the game not take forever. My own starting skills will be more geared early game. I’ll earn the rest as I go along. For now, I just want a not to hard start with some weapon skills I'm used to.

The game itself has a bit of a controversy to it. The difficulty of the game can be determined by if you play male or female. In this case, if you are a male you have an easier time and that is my choice anyway to play in a game like this.

On top of that where your backstory that you come from also impacts it. Do you have some kind of noble blood or where you raised by some low-class peasant? Since the goal here is just to enjoy the game and get back into things to play the DLC I went with upper-class choices to the best I could recall them.

While I think I will prefer using a sword in the short term a crossbow, in the long run, will be of need for sieging castles. I went for some survivability with strength and Ironflesh along with some power strikes to use in the short term. I hope to be cutting down my enemies from horseback as I dive and wave in and out keeping them busy and not paying attention to my army marching in and finishing them off. 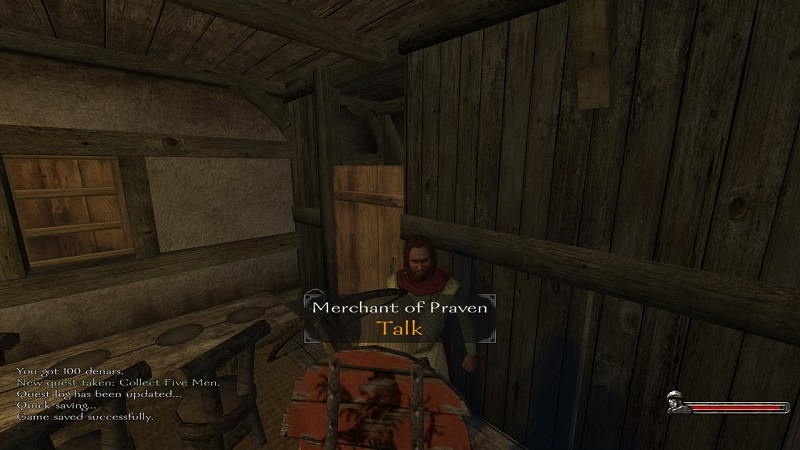 The game itself can be quite the undertaking in time. You have a rather large map and a couple of ways to get a win victory. For this, my goal is to befriend a king for the short term and gather some power. When I can play some tricks and get the king in a predicament I’m going backstab the guy and go for his throat. I want my own kingdom and to burn the lands as I take it all for myself.

Will this be the route I go? Will I be forever under the heel of some king and his demands? Well, I just started so I really have no idea. Only time will tell and a very long game it will be. With endless back and forth of retaking towns and replacing men who fall on the battlefields. Lots of charging in myself and being the factor if the battle is won or lost.

My starting location was simply the first one on the list Praven. If I recall it was a rather easy area and not too hard of a hard. I do have plans to build up a small army and then head up North into the cold for some farming. I won't get some of my economics going rather early on so I don’t have money issues mid game. That will require some farming up north and buying a business in different major towns.

Along the way, I’ll also be looking for different companions to join my armory along with more recruits. The companions themselves randomly appear at inns if I recall and you never know who, where, or when. They all have different bonus they bring with them from leadership, looting, and first aid to keep people from getting killed. Some of them hate different actives such as pillaging, lack of combat and they all hate a couple of each other as well. So finding ones that don’t hate each other and won’t get angry for what I won't to at the start is something I’ll have to keep in mind. Along the way, I might have to let some go if they become an “issue.” I can always hire them back later. 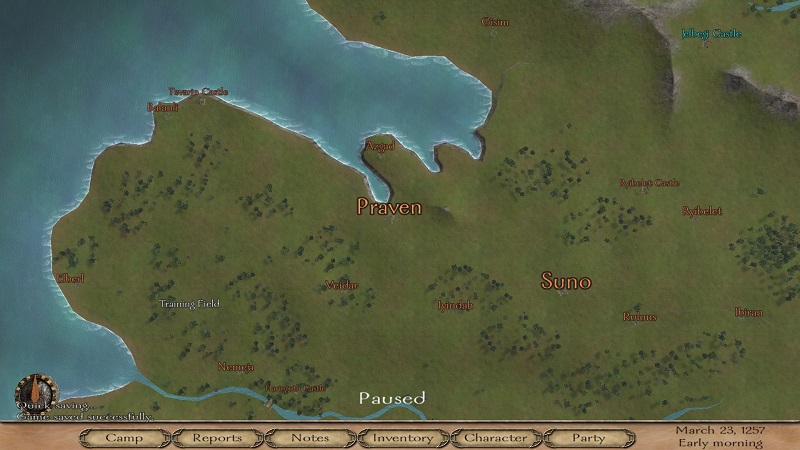 Here are a couple of screenshots of the different regions on the map. Not everything is shown that is on this map. It would take a few more screenshots just to show it all. As you can see there are mountains that can help or hinder you as traveling around takes a while. There are different biomes and each has an impact on different kinds of bandits, troops, and items that are found in that area. 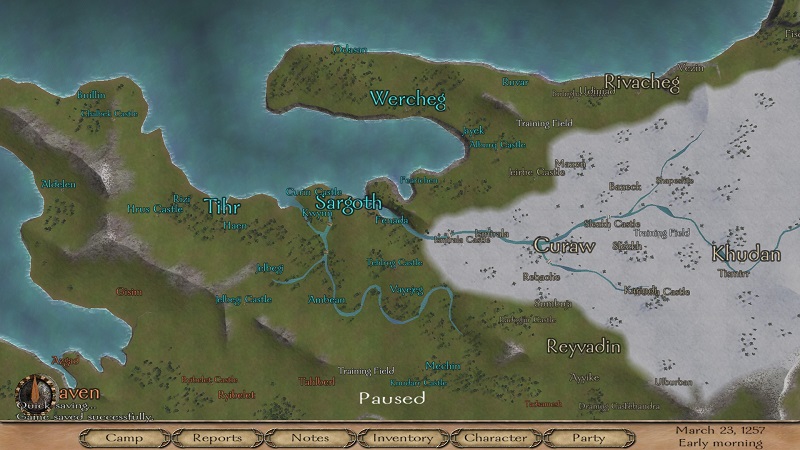 All big names on the map are a major city that I will need to hold and really fight for. They will be where I set up my economics at the early start in with business. Over time as conflicts break out and I make new enemies I will lose out on income earned that way as they won’t be happy about trying to run a business within those places. Once you take over a major city and they recover from the war there can be some nice profits being generated.

I will also be selling and maybe catching a tournament to enter or more as well as the bigger cities. 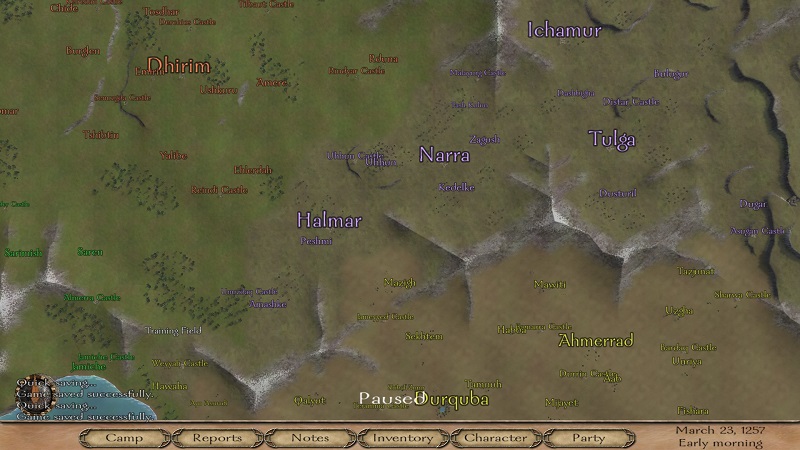 After that, you have harder to see places with the word castle in their name. Those won’t be as hard to hold as a major city but still will be quite a challenge. If I make an ok start with my starting king I’ll get a little place to my own to store troops to reduce costs when they are not in use. Along with a little bit of income as well form owning them.

Everything else is just tiny villages. I plan to use them for recruiting new people to train up and make into end game units. I’m not quite sure yet which kingdoms troops I will even want if any. I might just go for whatever I can for now. Mid game that might have to change and I just focus on recruiting from one area. They get attacked a lot and can provide some income in the short run. Kind of pains to deal with but you need them as well to win. 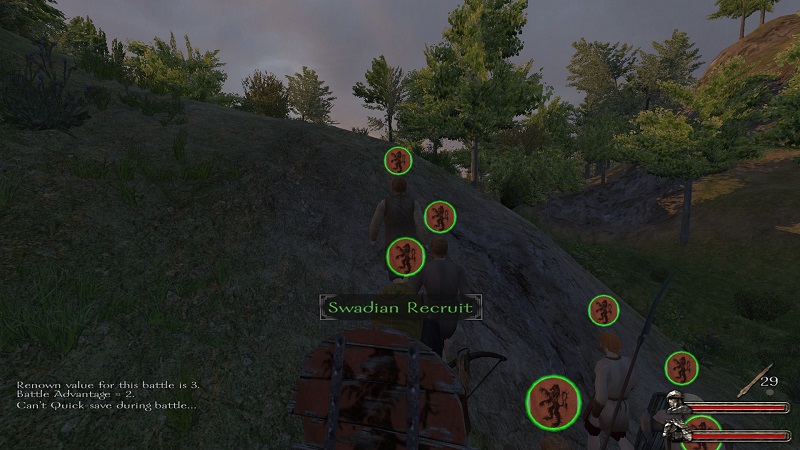 No way I can start up the game and not at least have one battle under my belt before calling it a night. While we got our butts kicked and I almost died due to forgetting key binding and my poor aim. We at least pulled off a victory even if it had many deaths.

There will be hundreds to thousands of battles like these where I’ll be leading my men into battle. Many will die, I might get captured or worse! I don’t have any mods installed at this time. I know endgame fights take forever as you don’t do the battle just once but it’s done in waves. As such I might have to look into options into allowing more troops onto the battlefield at a time. Back then computers could not handle hundreds or thousands (I forget how many) troops in a single battle. As such it would break them up into chunks. As such you would keep having to fight many battles before winning. On top of that many division of different companies can all join in on a battle. As such you could have a few kings and there important people on the battlefield. Perhaps I’ll capture one of them and make money from ransoming! 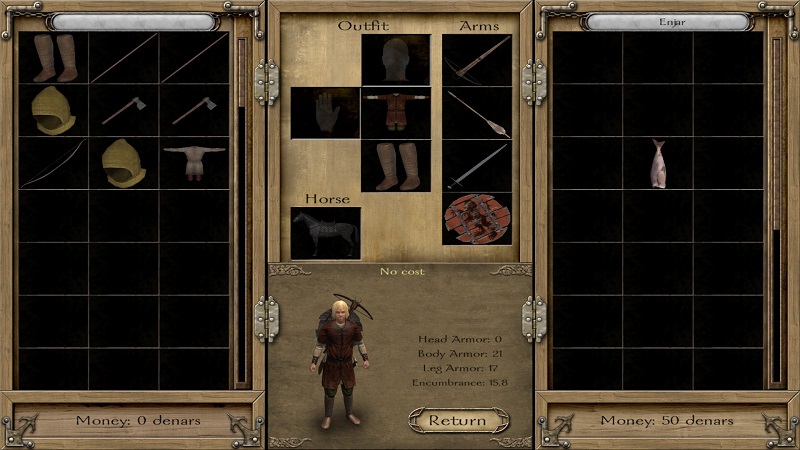 The loot was not worth more much but I took it all anyway. Right now I’m struggling to just pay weekly upkeep and I don’t want loose men or have issues without making payroll. Cheers to the next fight and maybe some upgrades for me to loot!